Don't Look Back in Anger

Posted in Limited Information on April 14, 2009

he Alara Reborn Prerelease is drawing very near, and we've even started to see the first preview cards (I have to admit, I'm already excited to get the chance to play with Terminate again). But before the Prerelease happens, let's take a look back at some of the lessons that we've learned during Shards / Shards / Conflux.

Pretty much every time a new set comes out there's a fear that some new element will completely ruin your drafting experience. So far that fear has been unfounded every time.

This time the "the sky is falling" fear was that the large number of domain cards would ruin signaling and possibly even take all of the strategy out of drafting as everyone would be drafting four- or five-color decks and they would just take the most powerful cards and fixing irrespective of color.

In reality, the four- and five-color decks are difficult enough to draft and require enough good things to happen that they are not particularly popular. Sure, you see a five-color deck every now and again, but six or seven of the players in any given draft will be drafting traditional two- or three-color decks.

It didn't take long at all for people to realize that five-color decks weren't ruining the draft environment for them, but then a new fear materialized ....

The Esper Menace and the Equilibrium Point

Esper was almost certainly the "best deck" during Shards / Shards / Conflux, but that doesn't mean as much as you might think. Esper has the most powerful cards, and fantastic Esper decks would frequently 3-0 draft pods. But because it is so powerful, Esper tends to be drafted by more people than the other shards, bringing the Esper decks back down to about the same power level that most of the other shards are at.

Even when there is a clear most powerful strategy, that will rarely detract too much from the quality of the drafts. If a deck is dominant, more and more people will draft it until it stops being dominant. As soon as it becomes overdrafted, less people will try to draft it, making it a great strategy once again.

Don't worry about a draft format being "terrible" or "unplayable"—that just isn't going to happen. There might be a format every now and then that you don't find interesting, possibly because there isn't a deck that you really enjoy drafting, but that doesn't mean that the format is "bad."

As long as there are enough distinct, interesting decks to draft, I don't really mind if there is one most powerful strategy. I'm still going to enjoy the format.

Too Many Color-Intensive Cards Can Be a Problem

If your mana isn't excellent, having a lot of color-intensive cards—especially if they're early drops—can cause you a lot of grief. I've seen plenty of Grixis decks with multiple Kederekt Creepers, a Sedraxis Specter, and a Blood Cultist filling up their three-slot lose game after game because they just didn't have the mana to make their turn-three play.

If you do have a lot of color-intensive cards, you need to make sure you can cast them.

This might mean that you have to take Absorb Vis and Rupture Spire higher than you might want to, but if that Absorb Vis is the difference between you being able to cast your three drop on turn three or, well, not, then you probably have to take it.

Instants Are Easier to Cast than Creatures

Not so for Naya Charm.

When you cast a Kederekt Creeper on turn seven, it's still going to be pretty good, but a Grixis Charm in that same situation will almost always be much better.

It's OK to have to wait on some of your instants. Sometimes it will even work out better for you that way. It might be the correct play to kill a Tidehollow Strix with a Grixis Charm, but if you don't have the mana to do it, and your opponent casts a Tower Gargoyle the turn before you draw that missing mountain, you're going to be pretty happy that you weren't able to cast your spell "on time."

Of course there are exceptions to this. Jund Charm is definitely much better when you have the ability to reliably cast it early, but it's still very impressive late in the game.

Even if you would normally take that Woolly Thoctar over that Grixis Charm (please ignore their wildly different places on the color wheel for this example), if you know that you're going to have a hard time casting either of them on turn three, and probably won't be able to cast them until around turn six or seven, then you should go with Grixis Charm.

It's better when you're actually going to be casting it. And that's all that matters.

New Tricks Can Really Change the Way You Play 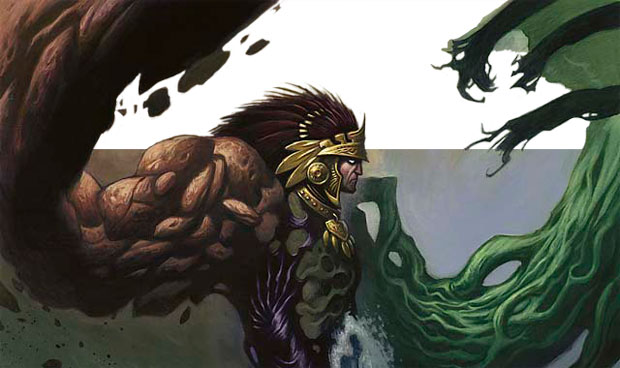 During one of my first Shards / Shards / Conflux drafts I saw a player with only an Obelisk of Naya available for mana attack with a Rhox Charger into a Sharuum the Hegemon. The Esper player blocked almost immediately; he still had a Tower Gargoyle in his hand and he "knew" that the only trick his opponent could have for one mana was a Magma Spray.

One Might of Alara and a couple of turns later, the Esper player was kicking himself for not remembering that there was a one-mana pump spell, Might of Alara, in the (then) new set.

Become aware of what commons tricks are in the new set as quickly as possible. If you don't you might end up making some serious, easily prevented blunders.

Sometimes the Best Decks Are Very Difficult to Get

Glaze Fiend and Hellspark Elemental are generally pretty marginal. Sometimes it'll make sense to play them because they fit in well enough with the rest of your deck. Then there are times when they're absolute all-stars that your deck is built around.

I only got the chance to draft a Hellspark Elemental deck once, but let me tell you, it was the most fun that I had in a draft all format.

I was black-red with some good cheap removal, 2 Blightnings, and a bunch of cheap unearth creatures, including 2 Viscera Dragger, 2 Dregscape Zombie, 3 Hellspark Elemental, 2 Rotting Rats, and a Corpse Connoisseur.

None of my games were even close.

It was pretty beautiful.

I've also suffered some of my biggest blowout losses in the format at the hands of 23 artifact / 6 Glaze Fiend decks and hyper, hyper aggressive Hellspark Elemental decks.

If a card is powerful, but hard to use, that doesn't mean you should ignore it. Quite the opposite in fact, you should instead be acutely aware of when you will be able to use that card to its fullest.

The Problem with Shard Convergence

The first time I saw Shard Convergence I thought it was going to be an absurdly powerful card. I mean, you draw four cards—sure they're lands, but four cards is so many.

Turns out I was wrong.

You rarely want Shard Convergence to be your turn 4 play, or your turn 5 play. If it is, you're probably going to fall pretty far behind. Sure you can come back from making a play that doesn't affect the board at all on turn 4-5, but you don't want to do that to yourself unless your subsequent plays are powerful enough to make up for lost time and then some.

Later on, when you have the time to cast Shard Convergence you've probably already drawn enough lands so you might not gain anything (other than marginally improving the quality of your draws), and you'd much prefer having a spell that will actually make an impact.

Just because a card looks flashy doesn't mean that it's good. Think about what it actually does and whether or not there is a good time to play it. If you realize that there's no time that you actually want to play a card, then, well, you probably don't want it in your deck.

Celestial Purge Is Good Enough to Main-Deck almost Every Time ...

... but Ignite Disorder is usually better off in your sideboard.

This might change with the release of Alara Reborn, but right now pretty much every deck has a couple of good or great targets for Celestial Purge.

In the same way that you would play Shatter if you knew that it would be good against most of your opponents (as was the case in Mirrodin block Limited), it's more than worthwhile to include Celestial Purge. Even if a deck only has a couple of black and/or red permanents, that means that they are probably pretty good. If you're playing against a Naya deck that only has Bull Cerodon and Rakeclaw Gargantuan as red permanents, then you're going to want to have that Celestial Purge.

Ignite Disorder, unfortunately, isn't always going to do what you want it to do. Your opponent might be splashing Woolly Thoctar, Sphinx Sovereign, or Nacatl Hunt-Pride as their only white or blue creatures. If you're stuck staring at your Ignite Disorder you aren't going to be too happy.

Take a close look at the conditional cards in Alara Reborn. There might be some gems.

The Biggest Shards of Alara Winner

Guess what? With the release of Alara Reborn, Branching Bolt is only going to get better.

Only a single pack of Branching Bolts means that those Cloudheath Drakes are going to come out to play all the time. And when there is a Branching Bolt, oh boy ....

A friend of mine recently sent out this deck to my draft mailing list and asked the people on the list how they would build it. So many interesting questions and points of contention came up that I felt I had to share it with you.

Don't be discouraged or surprised if your build is wildly different from other builds—there are a lot of very tough decisions to make here.

Posted in Limited Information on April 14, 2009