e were just handed the most complex and interesting format we have had in quite a while. The natural course of action is to dive in head first, draft four- or five-color decks, and spew value all over the table. Heck, if you felt like backing off a bit, there are tame three-color variants available, right?

The answer isn't that simple. With every deck we build in Dragon's Maze, we have to make key decisions about how many colors to include and how we are going to support those colors. Since the majority of the mana-fixing—a Guildgate in every pack and the Cluestone cycle—comes in the first pack, we are forced to make those decisions up front. 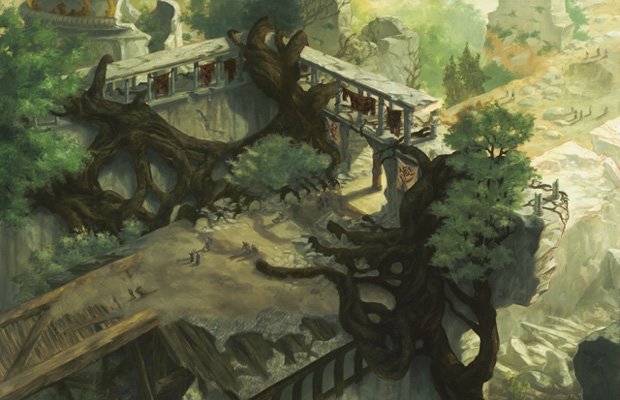 A popular—and flawed—approach for drafting multicolored sets is to take sweet cards in three or more colors for the first two packs, then—in a panic—take every piece of fixing in the last pack. This is poor planning and often leads to sketchy mana bases. In this block, since most of the fixing is in the first pack, we are forced to plan ahead.

It's been interesting to see how different people handle the Gates in the Dragon's Maze pack. I have been passed packs that had the Gate missing as early as pick three. It's rare to have that much information about what our neighbors are up to. We know there was a Gate (or shock land) in the pack, and we know someone took it. Once you see the second Gate missing, you know someone has moved in on a Gate deck. If it was just one random Gate missing in the first six or seven picks, it's safe to assume it was a shock land that someone was simply rare drafting.

Committing early picks to Gates means that you can cast the powerful spells you hope to open in the following two packs. It also means giving up some power level in the pack that contains the most diverse selection of powerful gold cards in the block.

This is a tricky balance, and I myself am still working out how best to approach it. Cluestones are a valuable tool, but they are also cumbersome. I prefer to run one—or sometimes two—Cluestones in my multicolored decks. This allows me to fix my mana without over-committing by running twenty mana sources. An opening hand with two lands, two Cluestones, and three spells looks fine, but sometimes it won't affect the board enough in time to be relevant.

As Dragon's Maze was being released, I had questions surrounding the viability of two-color decks in the full-block draft format. It was clear early that we were going to be able to accommodate three-color decks if we wanted, but did that mean normal guild decks would be thrown to the wayside?

As it turns out: No. I have had success drafting two-color guild decks in the full-block format. Sure, you miss out on some power, but the level of consistency you gain is high. While the decks I mentioned earlier are playing tapped Guildgates and non-board-affecting Cluestones, we are turning our team sideways and putting on serious pressure. It sounds simple, and it is.

This format rewards curving out even more than other formats simply because our opponents will often not be doing it on their side. In addition to clumsy Guildgates and mana rocks (a term used to describe artifacts that produce mana), three-color-and-up decks often don't have the colors they need, when they need them. When many cards in your deck require multiple colors of mana, it's reasonable to expect that there will be times when you can't cast all the spells in your hand.

This may sound obvious, but remember that the next time you draft a crazy four-color deck and can't cast that critical One Thousand Lashes after your opponent drops a Ghor-Clan Rampager on turn four. The aggressive two-color decks (Boros and Gruul, mainly) are particularly adept at punishing slow starts from greedy decks. You may have played a big six-drop a turn early, but thanks to the bloodrush mechanic and the wide selection of combat tricks available, you may just be dead anyway.

Cards like Act of Treason and Traitorous Instinct can be devastating if your plan revolves around resolving a big bomb. Additionally, cards like Mind Rot and Purge the Profane gain value in midrange decks thanks to their ability to clear out expensive bombs from our opponent's hand. When our opponent is forced to either discard a bomb or the mana sources needed to cast it, he or she is not in a great position.

Don't be afraid to try out traditional guild decks in full-block draft. While perhaps not as flashy as their multicolored counterparts, they are often the right tool to get the job done.

When I started writing this column I wrote about Gatecrash, since it was the set coming out at the time. One of the things that stuck out to me about Gatecrash draft was the importance of two-drops in the format. With at least two aggressive decks floating around every draft, neglecting the two-drop slot could be a recipe for certain death.

This hasn't changed much now that we have Dragon's Maze along for the ride. Coming out of the Dragon's Maze pack, I kept feeling like I was woefully short on two-drops, so I decided to do some research. Let's take a look at the two-drops from the maze.

There are ten common and uncommon two-drop creatures in Dragon's Maze (and three rares, which we won't consider for this exercise).

Of the ten, seven range from decent to pretty darn good, and three are more specific-deck scenarios.

Dragon's Maze is a small set, and this isn't a ton of playables. For comparison, I did a quick check of both Gatecrash and Return to Ravnica and found that they had twenty-three and twenty-one playable two-drop creatures, respectively. There are about 100 more cards in the big sets than the small, but the ratio still doesn't line up favorably for Dragon's Maze.

Assuming that your definition of playable is close to mine, Gatecrash has around 9.2% playable two-drops. Return to Ravnica has about 8.4%, and Dragon's Maze has a paltry 4.4%.

This helps explain why I was feeling a bit light on twos coming out of the maze. I have yet to discover what effect this will have on the format, however. It's possible that the two-drops in Dragon's Maze are all forced into the playable camp. Another outcome is that it's understood that one must prioritize them in the last two packs. Lastly, they may simply not be as important as they were before.

One distinction I want to make is in regards to three-color decks. I get the feeling that people think they can just freely run three-color decks. Then they end up with the dreaded six-six-five mana base and things start to go downhill. Even with a Gate and a Cluestone, it can be difficult to cast all your spells in a true three-color build.

I recommend drafting one guild heavily and going for a reasonable splash on a third color. This alleviates some of the pressure on your mana base and can make a dicey deck a smooth runner.

The general consensus is that the format is slower now. While I have seen this myself, I have also garnered a healthy respect for the possibility of speed in the format. Lean, aggressive, potent, one-guild decks exist. They are a factor that must be considered when drafting. If you haven't given good old Boros a spin in a while, I think full-block is a great time to try it out.

Good luck in the draft queues!