Grand Prix–Indianapolis has come and gone, and Jelger Wiegersma, one of the legends of the game, walked away with the crown.

Jelger’s win was a very impressive display of skill and a great demonstration of what happens when a top player has a great understanding of the intricacies of a Limited format.

Unfortunately, I got destroyed at the Grand Prix. After my three byes, I won only a single match. And that was after my opponent got a game loss for showing up late to his round.

Needless to say, I was disappointed with my finish. I missed Grand Prix–Birmingham because I was stuck in the hospital, and now I bombed out of one of only a few big Limited events this year. I was pretty shaken by it, shaken to an irrational degree. There were even a few moments where I was considering skipping Grand Prix– Madrid . But after I was able to come to my senses, I remembered why I’ve chosen to play in so many tournaments this year.

I once again put into perspective the fact that this was just a tournament and remembered that Magic is a really hard, fun game played by a lot of smart people. So no matter how much you practice, or how well you play, some tournaments just don’t go your way. With that in mind, it’s always important to try to learn as much as possible from your losses (and your wins) but it just isn’t good, or remotely constructive, to think of a loss—or even a series of losses—as a “failure.”

If I had caught a few more breaks in this tournament I could have had a very good finish. Sure that’s not immediately obvious from a 1-3 finish, but I was doing very well in my practice drafts, and I know that I have a very good grasp on how to draft the format. After I calmed down, I realized that the biggest mistake that I made going into this tournament was not knowing exactly how fast most Sealed decks are. 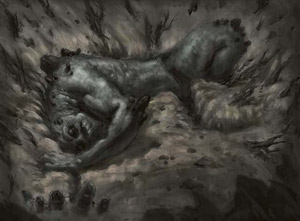 For those of you who have played a lot of Shadowmoor Sealed, you have probably already noticed that Sealed decks are noticeably faster than Sealed decks in formats past.

I built a bunch of practice Sealed decks before the tournament, but I only played a handful of games with them against other Sealed decks.

Because of this, I built a slightly slower Sealed deck then I probably should have, and I think that I made a few mistakes on when to mulligan, keeping hands with very good late games—late games that I never got to because my opponents decks were just too fast.

Before I go any further, I have to say that my absolute favorite part about Grand Prix–Indianapolis was that my friend and teammate Jamie Parke made it to the Top 4. Not only is this an awesome finish in and of itself, but along with his Top 16 at Grand Prix–Philadelphia and his Top 50 at Pro Tour–Hollywood, Jamie now has 14 pro points, and thanks to the fact that he is guaranteed to reach level 3 just by attending Pro Tour–Berlin (thus granting him an invite to Worlds) he is now almost assuredly going to reach the 20 points he needs to achieve level 4 and the invitation to every Pro Tour next year that comes with it.

There is actually a lot to learn from this pick.

By taking Puresight Merrow, Jelger left his options completely open, as his stack now consisted of two white-blue hybrid cards. If he had instead taken the more powerful Inkfathom Witch, he would have needed to move into blue-black immediately.

Not only did Jelger leave his color options open with this pick, but Puresight Merrow is also Jelger’s second creature with a cheap untap ability, meaning that he will be in a prime position to take advantage of any Power of Fires, Presence of Gonds, or Elemental Masteries he may see.

By taking the Briarberry Cohort, Jelger started to lean towards blue.

However, by passing the second Inkfathom Witch, Jelger has now passed three consecutive packs in which a blue-black card was clearly the best card in the pack. This means that the player to Jelger’s left, James Beltz, has almost certainly began to move into blue-black.

This is a fact that Jelger certainly recognized. If you are paying enough attention in your drafts, and the packs are as clearly tiered as Jelger’s packs, you should be able to tell, with reasonable accuracy, what the person to your left is drafting.

Lurebound Scarecrow is a card that I never particularly cared for, but Jelger seems to like it a lot. If I had been in his seat, I would have taken the Wanderbrine Rootcutters.

What would you have taken in this spot?

Pick 7: Dire Undercurrents
Other notable cards: Helm of the Ghastlord

Jelger had never played with Dire Undercurrents before the Top 8 of Grand Prix–Indianapolis, but he was confident that Dire Undercurrents was an incredibly powerful card. Jelger proved himself right in the very first elimination round.

At this point, passing the Helm of the Ghastlord, Jelger has to be pretty sure that the player to his left is in blue-black.

Pick 8: Gravelgill Duo
Other notable cards: Advice from the Fae

At the end of the first pack, Jelger could play all of his cards with blue mana, meaning that he could draft almost any card sees in the next two packs.

Jelger could have theoretically picked up the Wilt-Leaf Liege and moved into blue-white, but that wouldn’t have accomplished much of anything. Instead he stayed on target and picked up the very impressive Plumeveil.

Jamie Parke must have been extremely happy to have gotten passed a Wilt-Leaf Liege and a Firespout in consecutive packs, but that’s not to say that Jelger was at all disappointed. Plumeveil and Silkbind Faerie are two perfect cards for Jelger’s deck.

If Jelger showed his emotions when he played, he would have been beaming. Instead, he methodically placed his choice for best common in the set into his stack.

This pick surprised me a bit. I thought that Jelger would definitely take the Inquisitor’s Snare here, but he instead went with Boggart Arsonists, a card that is frequently left in the sideboards of base red decks.

But, because he was already seeded into red, thanks to the Power of Fire, Jelger went with the card that he would definitely be able to play.

Jelger had an excellent Pack 2 and seemed to be well on his way to a great deck.

Jamie Parke picked up the Firespout and the Wilt-Leaf Liege, but, despite being fed by a blue-black drafter and a blue-red drafter in the second pack, he hadn’t picked up many other good cards and looked as though he would have to work hard to put together 23 playables by the end of Pack 3.

James Beltz had picked up a Corrupt and a Beseech the Queen, and also seemed to be well on his way to a very good deck.

Jelger thumbed through his pack so quickly that I didn’t get a chance to see any of the other cards in the pack. Jelger was no doubt quite happy to have picked up a second copy of his personal pick for the best common in the set.

Jelger spent the entire allotted time to make this pick. I thought that he was leaning toward the Puncture Bolt, but he eventually decided on the hybrid 3/3.

After the draft I asked Jelger why he took the 3/3 over the normally much more valuable Puncture Bolt, and he told me, quite simply, that he needed another body to fill out his deck properly.

There is a lot to be learnt from this pick. Just because a card is better in the abstract certainly doesn’t mean that it’s better for you. Jelger knew exactly what he needed to do to make sure that his deck looked the way that he wanted it to look, and in order to accomplish this, he needed to make a very odd-looking pick.

I am definitely going to come back to this point soon, but in the meantime, try to keep an open mind about taking the “worse” card if it will be better for your deck.

This was a particularly weak pack and Jelger was forced to third-pick a card that ends up in most peoples sideboards.

Because almost all of Jelger’s cards up to this point are playable with blue mana, he was in a perfect position to play a deck that splashes two colors. When he got a fifth-pick Mistmeadow Witch, it became clear that those two colors would be red and white.

Pick 6: Helm of the Ghastlord
Other notable cards: Scrapbasket

This pick surprised me initially, but I wasn’t keeping as good a track of Jelger’s curve as Jelger was. After I realized how his deck was shaping up, his pick made perfect sense.

Aside from getting passed another Power of Fire and a Mistmeadow Witch, the third pack didn’t go very well for Jelger. Before he sat down, Jelger mentioned that he was worried that he might be short a playable card, as the third pack just didn’t pan out for him.

When he laid out his deck, minus the playable but not impressive Prismwake Merrow, Whimwader, Thoughtweft Gambit, and Ghastly Discovery, he found himself with exactly 23 cards. He added 10 Islands, 4 Mountains, and 3 Plains and he was done.