Drafting, Then and Now

Posted in Limited Information on November 1, 2011

n my first Invasion draft, I wound up with an absolute mess of a deck. I tried to draft a "White-Blue Control deck" full of life gain, counterspells, and a bunch of other cards that didn't actually do anything other than delay the inevitable (and they weren't even great at doing that). After I failed to win even a single game that draft, I realized that I had a lot to learn if I was going to win at Limited. 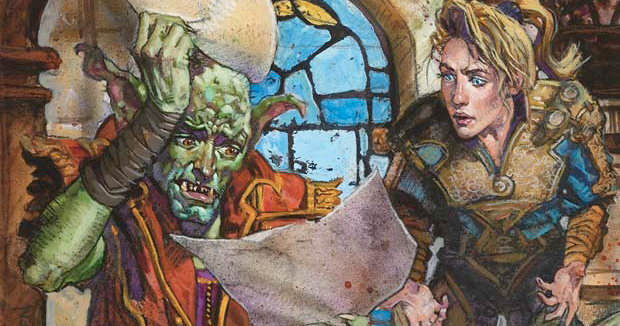 Over the course of the next year, I did everything I could to learn more about how to draft. It took me a while to be able to figure out for myself what made a draft deck "good," but eventually I was able to start winning matches (if not entire drafts) by emulating what the most successful drafters were doing: drafting three- to five-color decks full of all of the most powerful cards.

You see, during triple Invasion drafts, decks with three (or more) colors were the rule, not the exception. Unless you were drafting something like a very aggressive white-blue evasion deck, or you got a ton of good removal and were able to stick to red-black, you were probably going to end up playing (at least) three colors.

Yes, there was a fair amount of mana fixing in Invasion, but that wasn't what pushed people into playing many-colored decks.

The real reason why people played three colors during Invasion block was because the format was slow enough that they could get away with it, and the power differential between the best cards in the format and the average cards was big enough to make playing a shaky mana base worthwhile.

The creatures back then were nowhere near as good as they are now.

In the modern era, a four-mana 3/3 with no abilities tends to be fine, but in no way is it an impressive card. If you can cut those vanilla 3/3s from your deck, you will pretty much always want to (unless you need them for curve considerations, or if you have a bunch of accelerants so you can easily cast them on turn three).

You know how disappointing it is to cast a Festerhide Boar without morbid. You know, when it's "only a 3/3"? And Stampeding Rhino, a five-mana 4/4 with trample, and only a single green mana in its mana cost, would frequently go tenth or even twelfth in Magic 2012 drafts—before eventually rotting away in someone's sideboard.

And have you seen how late Battleground Geists tend to go in drafts? 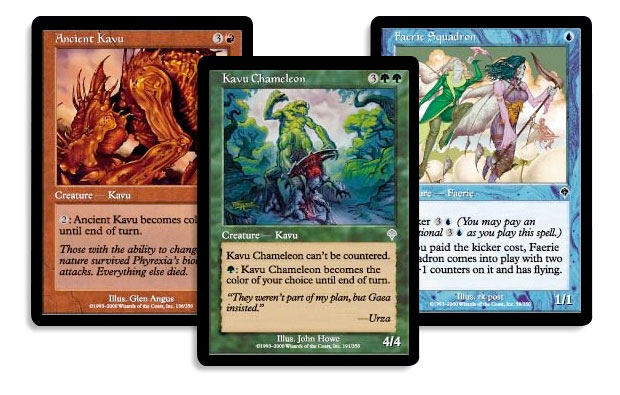 That's right. Players were happy to start their drafts with a five-mana 3/3 flier with no other relevant abilities (players hardly ever cast Faerie Squadron without kicker unless they were going to use it to set up a creature with "gating," such as Cavern Harpy).

Drafters Today Are So Spoiled...

Shivan Dragon and Mahamoti Djinn were once considered the absolute cream of the crop. They were huge, extremely difficult to kill, and nigh impossible to block profitably. Only Fireballs, Pacifisms, Counterspells, and Terror effects could reliably take them out—and those types of all purpose answers were tough to come by. 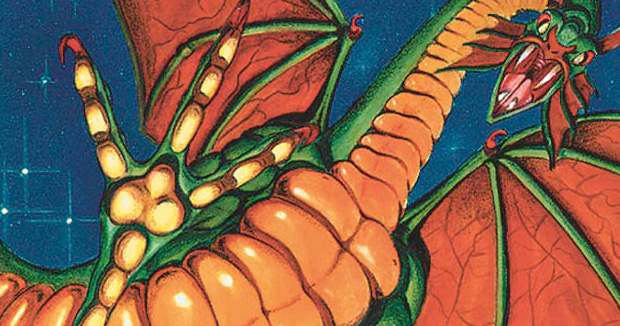 Nowadays, bombs tend to be bigger, and better than they were in the past—but so are the cards that surround them.

Heck, in recent years, there have even been formats, like Zendikar / Worldwake, where five-mana 3/3 evasion creatures are barely playable. Sure, there's the occasional deck where those five-mana 3/3 fliers fit in, and they would never be embarrassing to play in your deck, but they were by no means early picks.

Sure, Inferno Titan and Reaper from the Abyss can run circles around pretty much any bomb creature from the 90s, but there's a similar power differential between cards like Vampire Interloper, Stitched Drake, and Festerhide Boar and their old-school equivalents.

If you draft an aggressive green-white deck and start the game with a Doomed Traveler, a Spectral Rider, an Orchard Spirit, and Travel Preparations, it won't matter how many bombs your opponent has in his or her hand—you're probably just going to win before he or she can cast them.

So while game-breaking bombs might appear more powerful on the surface than they were in years past, their relative impact actually tends to be comparable (or smaller, depending on the exact format) to what it used to be.

While creatures have certainly gotten better over the last decade, there's no hard and fast rule for what types of creatures are worth playing now. Goblin Piker was borderline unplayable in Magic 2011 Limited... but it was a staple in aggressive and controlling decks alike in Magic 2012 Limited. 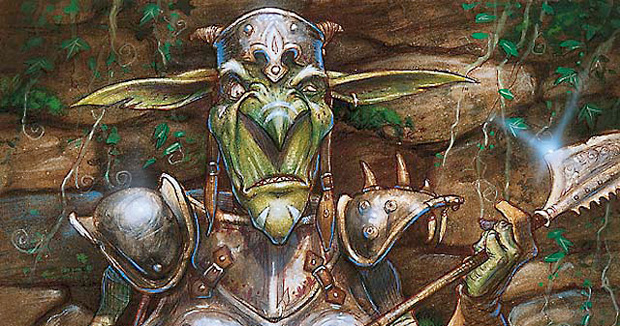 Because Magic 2011 Limited was dominated by controlling strategies, Goblin Piker didn't serve a very strong defensive role. And while it would occasionally make the cut in aggressive decks, the abundance of creatures in the format with 3+ toughness made it a less than appealing option. 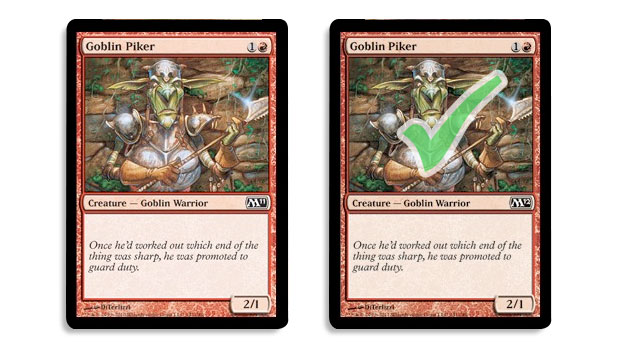 In Magic 2012 Limited. Goblin Piker was good because you needed an abundance of two-drops to keep up with your opponents, set up your own bloodthirst, and/or make sure that your opponent's Gorehorn Minotaurs weren't coming down as 5/5s on turn four.

Because the format was so fast, Stampeding Rhino would end up getting cut from a lot of Magic 2012 decks. By contrast, Spined Wurm was a pretty automatic inclusion in Magic 2011 drafts, which were relatively slow.

Cheap answers like Dead Weight, and in some cases Sensory Deprivation, give you the time you need to take over the game with your superior card quality. You eventually close things out with your bombs, your evasion creatures, or simply burying your opponent with card advantage, dealing the finishing blows with whatever creatures you happen to have lying around. 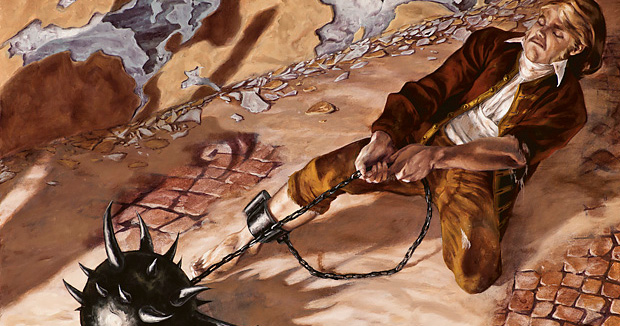 If you feel yourself falling behind during the first couple of turns of the game, or you seen an opportunity for yourself to quickly close out the game against what appears to be a more powerful deck, then go ahead and use your removal spells early.

The fact is, players can put together very aggressive starts in modern Limited formats, and the possibility that games can just end by turn five or six needs to be respected. But if you can tell that the game is going to go long, you want to hold onto your removal spells until your opponent casts something that you absolutely have to kill.

If you blow a Dead Weight on a redundant 2/2 to punch through a couple of points of (ultimately irrelevant) damage, you will have no one to blame but yourself when your opponent drains you to death with that pesky Falkenrath Noble that you had "no way to kill." And while it might seem like a good idea to Brimstone Volley your opponent's Moon Heron to clear the way for your Chapel Geist, you'll be pretty sorry when your opponent's Bloodline Keeper comes down a couple of turns later and immediately takes over the game.

It was once a very real challenge to get enough playable cards to fill out a two-color deck. If you didn't read the signals that were being sent to you correctly, you could easily end your draft with as few as eighteen to twenty playable cards in the two colors that you wanted to be in. Then you would be forced to splash for mediocre cards in another color.

The end result? A deck with about average overall power level, but some pretty serious mana problems. 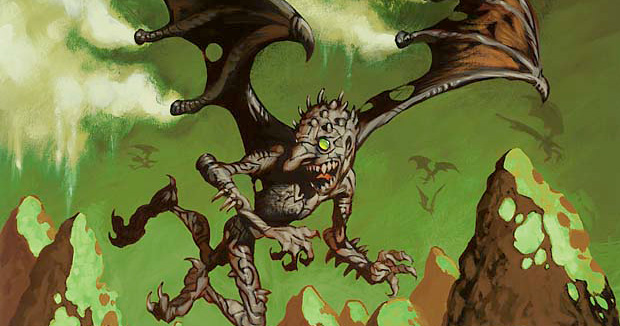 The main reason for this was that there used to be quite a few unplayable cards in every set. These cards—like the grossly overcosted Chimney Imp—would litter booster packs, and make it difficult for players to find enough playable cards for their decks.

Nowadays, almost every common is playable, which gives us the luxury of being able to cut cards like Stampeding Rhino, Goblin Piker, Kessig Wolf, and even Battleground Geist, if we have better cards at the appropriate point in our curve.

There's no guarantee that every Innistrad draft will go well for you, or that all of your cards will work well together. But unless you switch colors midway through a draft or your neighbors are in the exact same colors you're in, you shouldn't have much difficulty finding twenty-two to twenty-four spells (in two colors) to fill out your deck with.

Since it's so easy for pretty much everyone at your draft table to put together a powerful and consistent deck, simply getting enough playable cards in two colors isn't enough to win anymore. Sure, if you have some early defense, a couple of removal spells, and some good evasion creatures, you'll be able to pull out your fair share of victories. But the fact that you will be able to reliably put together a decent deck gives you the freedom to pursue a very focused deck.

You can spend some picks trying to make Red-Green Werewolves, White-Green Humans, or Blue-Black Mill Yourself work. And even if you don't end up playing your Moonmists, or if you have to cut a Forbidden Alchemy, or if that Hamlet Captain that you took third ends up being somewhat underwhelming, you're still going to end up with a very reasonable deck.

Posted in Limited Information on November 1, 2011