Posted in Limited Information on March 27, 2012

ver the past few weeks, White-Black Humans has become one of the most desirable draft archetypes in Dark Ascension-Innistrad Limited.

While the color combination was nearly unplayable in triple-Innistrad Booster Drafts, the introduction of Skirsdag Flayer (which goes from being just another good card to an absolute powerhouse in a white-black deck full of Humans), the certifiable bomb Lingering Souls, and a general increase in the quality of black cards has made white-black a force to be reckoned with. 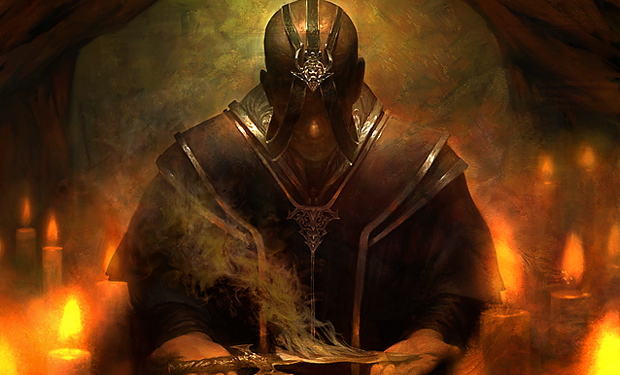 But even with the overall increase in card quality, and access to two amazing uncommons, if you don't approach the draft from the right angle it's still possible (and in some cases quite easy) to draft a white-black deck that has a lot of trouble winning.

While some color combinations allow you the freedom to simply take the best (curve appropriate) card in your colors each pack—if you're drafting a white-black deck and your cards don't work well together, you're going to find yourself struggling throughout most of your matches.

So how do you draft a successful white-black deck?

You need to focus on synergy, and you need to make sure your mana base actually works for you.

Before we look at the cards you want to draft, let's take a look at one of the easiest pitfalls to fall into when drafting white-black: bad mana.

The cards in your deck can be very good, but if you can't cast them in a timely manner you're going to have a lot of trouble winning.

Even though they're roughly equivalent in power when they're in play, there's a reason why Spectral Rider is a first-pick card (in the right decks) and most Abbey Griffins spend their lives living in captivity in peoples' sideboards. The reason is, Spectral Rider can be played on turn two and immediately have a big impact on the game. Abbey Griffin costs fully twice as much as Spectral Rider and tends to get seriously outclassed by other four-drops.

Despite being a bit underpowered for its cost, Abbey Griffin is still playable, but even so, you should be actively looking for other cards to replace it with.

And if you don't have the right mana base, you turn your Highborn Ghouls and your Spectral Riders into wannabe Abbey Griffins, since you're going to have a lot of trouble playing them on time.

Highborn Ghoul and Spectral Rider are both very good (and functionally almost identical) cards. But they generally don't belong in the same deck together.

Anytime you have spells with conflicting mana costs—such as a couple of Highborn Ghouls, a Spectral Rider, and a Loyal Cathar— in your deck, you're invariably going to run into a lot of trouble.

If you draw both a Highborn Ghoul and a Spectral Rider in your opening hand, in the best case scenario where you draw perfect mana you'll be able to cast one of them on turn two and the other one on turn four. (You need to have played Plains on your first two turns to cast your Spectral Rider and Swamps on turns three and four to get the two black mana to cast Highborn Ghoul.)

Of course, you'll occasionally have a game where you cast a Spectral Rider on turn two, a Chapel Geist on turn three, and a Highborn Ghoul and a Loyal Cathar on turn four—but those games are going to be few and far between.

Far more frequently, you'll find yourself able to cast one of your double-colored two-drops on turn two or three, then you'll watch as the other one rots away in your hand until it has only a marginal impact on the board.

Then, you'll have the truly nightmarish games where you keep an opening hand with a Plains, a Swamp, a Highborn Ghoul, and a Spectral Rider—but you don't draw another land until several turns have gone by. Even if you do draw your third land on turn three, you'll have missed out on the opportunity to play one of your evasive two-drops on the second turn because you simply didn't have the mana to cast it...

And I'm just beginning to scratch the surface of the mana problems that you can, and will, encounter when you have conflicting mana costs in your deck!

So sure, you can play Highborn Ghoul and Chapel Geist in the same deck—but you shouldn't rely on casting them both on time. Because not only will you run into the situations where you draw both of them (with perfect mana) and you have to make a choice as to which one you will cast first—and which one will come into play way behind schedule—but you'll also have a lot of games where your mana isn't perfect and you need to wait quite a while until you can cast that oh-so-crucial Chapel Geist.

So you know to be careful not to fill your deck up with Highborn Ghouls and Loyal Cathars, and you're ready to draft a deck that can easily cast its spells. What's next?

Next, you need to keep your eyes peeled for a card (or cards) that will explicitly dictate the way you should draft.

If you begin your draft by taking a Skirsdag Flayer followed by a Ravenous Demon, you're (obviously) going to want to go out of your way to draft as many Humans as possible.

If you instead start off your draft with a Lingering Souls, a Highborn Ghoul, and a Niblis of the Mist, you could still end up with a dedicated White-Black Humans deck, but you're more likely to find success drafting a traditional deck full of evasion, removal, and good ways to stall out the game.

While you're going to have a very good sense of what to do if you start your draft with two copies of Skirsdag Flayers (draft a ton of Humans) you don't need to grab any bombs or cards that shine individually in the deck in your first couple of picks to draft Humans. You could simply start things off by taking a Loyal Cathar and a Gather the Townsfolk, and then begin looking for tribal synergies from there.

Once you start drafting Humans, you want to keep an eye out for ways to sacrifice your own creatures... 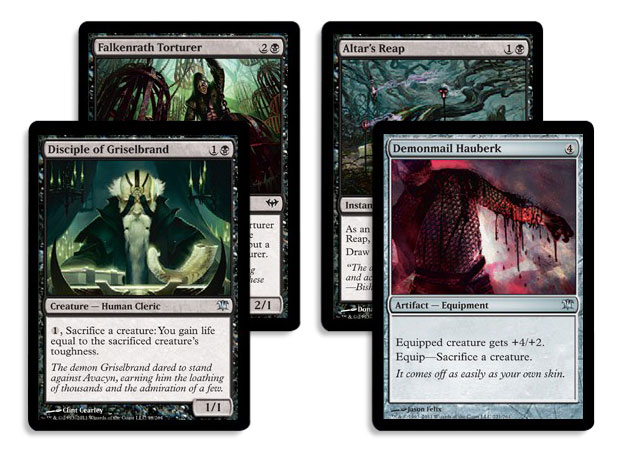 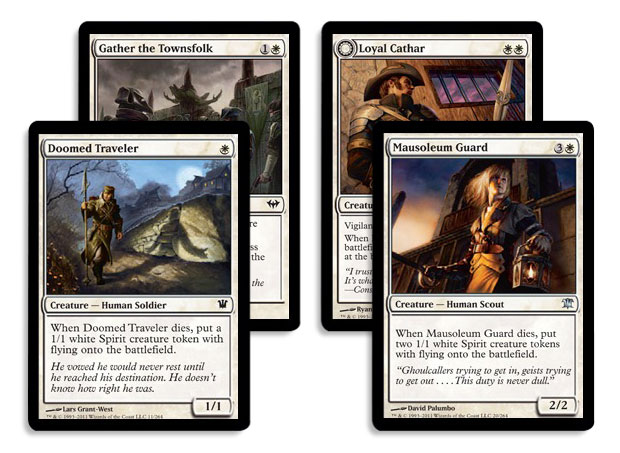 cards that allow you to profit from the death of your own creatures... 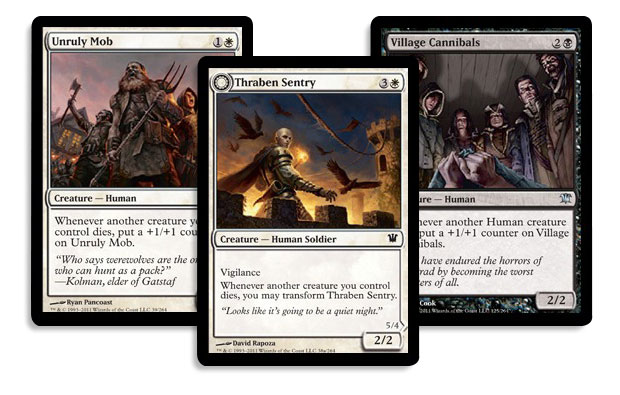 and, of course, any good removal spells you can get your hands on... 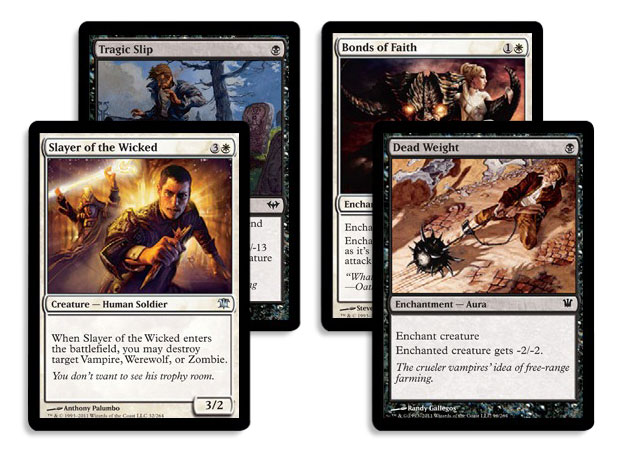 If you are relying on the synergy between Humans that don't mind dying (Loyal Cathar), sacrifice outlets (Falkenrath Torturer), cards that give you a direct benefit when your own creatures die (Unruly Mob), and cards with morbid (Morkrut Banshee), then it's particularly important for you to make sure your deck's curve is low.

If you find yourself waiting to get your engine going, you're going to need to have some very good cards (like Mausoleum Guard and Morkrut Banshee) to get yourself back into the game.

One of the keys to successfully drafting a synergy-heavy deck like White-Black Humans is a willingness to take cards that are a bit weaker independently than other cards in the pack, but will ultimately perform a vital role in a deck that requires a lot of different pieces to function properly.

So before you take that Spectral Rider, make sure you are actually going to put together a mana base that will allow you to reliably cast it on turn two. And even if you can, check to make sure there isn't a better card for your deck in the pack.

You just might realize you don't have a sacrifice outlet yet, and you simply have to take the Disciple of Griselbrand that's in the pack or else risk stranding your morbid cards in your hand...

Posted in Limited Information on March 27, 2012