Posted in Limited Information on November 24, 2009

Sometimes you can figure out things that you should do to maximize your chances of getting along with the person who is passing to you as early as your second pick.

Most of the time when you get a strong signal from the first pack that gets passed to you, it's a signal for a color to go into. For example, if you get passed a Rampaging Baloths second pick, it probably doesn't matter what else is in the pack. You're almost certainly going to want to go green at that point.

But if you have a good knowledge of the set, and the pack is just right, there are times when you can actually figure out with reasonable accuracy what the person to your right took with his or her first pick.

Last week's bonus exercise put you in an 8-4 draft on Magic Online. You had just taken a Trusty Machete out of your first pack, which contained:

You then got passed a pack that contains:

Figuring Out What People Are Taking

First off, we should figure out which cards in the pack deserve our attention.

Without a doubt, the highlights of this pack are Burst Lightning and Hideous End. Sure, there are some other reasonable cards, like Kor Aeronaut and Adventuring Gear, but nothing that's even in the same league as the two removal spells.

And unless you are dead set on forcing white, or not drafting black or red, you really shouldn't consider taking anything other than the Burst Lightning or the Hideous End (and even if you were interested in forcing white, I would argue that now isn't the time or the place to try to do that).

So there are two premium cards in the pack to choose from, and they have pretty comparable levels of power. How do you decide between the two? First, you should think about what you passed. There was a Disfigure (the most likely card that the person to your left picked), but there was also a Grazing Gladehart, a Spire Barrage, a Murasa Pyromancer, and an Armament Master.

Seeing as there is no way that you can have any knowledge of what the person on your left took with his or her first pick, the most likely card that he or she would take out of this pack would be the Disfigure.

But if the player to your left first picked a Spire Barrage, then his or her pick out of this pack will almost certainly be the Spire Barrage. Or if he or she took a good green or white card over a bunch of black cards, the pick could easily be Armament Master or Grazing Gladehart.

But even if the Disfigure doesn't get taken second (which it probably will), it is very unlikely that the next person will pass it as well. For that reason, you can safely assume that you will probably have to cut black pretty hard or else fight over it in pack 2 with (at least) one of your immediate neighbors. This is a strike against taking the Hideous End.

But before we make a decision, let's see what additional information we can get from the contents of this pack. If you look closely, you will notice that there's an uncommon missing in the pack.

That brings to mind the question: what uncommons in the set would you take over Burst Lightning and Hideous End?

For me, the only answers that I would go with are Marsh Casualties and Vampire Nighthawk. However, people in the forums also suggested that they would consider taking Living Tsunami or Trusty Machete out of this pack.

I don't think that Living Tsunami is on the same level as Burst Lightning or Hideous End in large part because blue has so much less going for it in Zendikar than red or black do. Even if you are very interested in drafting blue, unless you want to force something like green-blue landfall it's much more important to establish yourself in either red or black while you have the chance than to pick up that Living Tsunami.

Additionally, I think that Living Tsunami is a little bit weaker in the abstract than either Burst Lightning or Hideous End. So between the quality issues and the color issues, I'd be hard pressed to make a good case for how to justify taking Living Tsunami over either of these top-notch removal spells.

While I still don't agree with it, there's a little bit more weight to the Trusty Machete argument. It doesn't commit you to a color, and if you are actively disinterested in drafting black or red, this could be a very good way to push the players to your left into both of the colors that you don't want to touch.

That being said, the majority of the time the person to your right will have taken a Vampire Nighthawk or a Marsh Casualties out of this pack.

You take the Burst Lightning.

Additionally, you should be looking to stay away from black at all costs. Even if you see a good black card fifth pick and you start thinking that you are getting a signal, you're probably wrong. Odds are, that pack was just particularly strong and the player to your right happened to have a more attractive pick for his or her black-X deck.

There were people who said that they would have taken Trusty Machete out of the Burst Lightning + Hideous End pack (and some people even went so far as to suggest that they would take Adventuring Gear out of the first bonus exercise pack.)

Trusty Machete is definitely a card that I'm very happy to first pick, and while I wouldn't take Trusty Machete over a Burst Lightning or a Hideous End, I would take it over a Disfigure or a Journey to Nowhere.

I think that Trusty Machete is roughly on par with Disfigure if you are already in black, and I could easily see myself taking either one depending on how my deck looked in pack 2 or 3. But the fact that the Equipment doesn't have any color requirement makes it a stronger pick to start your draft with.

While I personally wouldn't take Trusty Machete over Hideous End or Burst Lightning, I can certainly understand why someone might. They want to keep their options open, and they don't mind giving up a little bit of abstract power to do so.

However, if you are going to do this, you have to be careful to understand the implications of what you are passing. The cost of passing a Hideous End and a Burst Lightning is much greater than you might initially realize. You see, by passing both a premium black card and a premium red card in the same pack, you are practically guaranteeing that you will have to fight over the two strongest colors in Zendikar in pack two. Doing this will greatly hurt your chances of getting gifts in either black or red in pack 2.

If you spend too much time waiting to try to read signals, you can end up setting the person to your left into exactly the colors that you decide are "open." If you wait to make that decision till midway through the first pack (spending your picks on artifacts and especially eye-popping cards), the person to your left could be solidly in the colors that you have decided to move into. And by about pick 7 or 8, you won't be getting any real returns for the remainder of that pack. That leaves you with just packs 2 and 3 to really take advantage of the colors that you've set yourself in.

But because you waited so long to make a decision, causing the person to your left to go into the very colors that you are in, pack 2 probably won't go that well for you. Leaving you with just pack three to reap the rewards of your flexibility. Which is the same one really good pack that you would have gotten if you had drafted a color or two hard in pack one in order to cut your leftward neighbors off from a color (or colors) that you were interested in drafting. So in fact, your reward for remaining "flexible" in many positions will in fact be functionally identical to the reward that you would have gotten for being "stubborn."

I'll have more on the effects of signaling, flexibility and stubbornness soon. But in the mean time, try thinking about how what you are passing will affect the ways that your neighbors will draft.

A Quick Note on Adventuring Gear 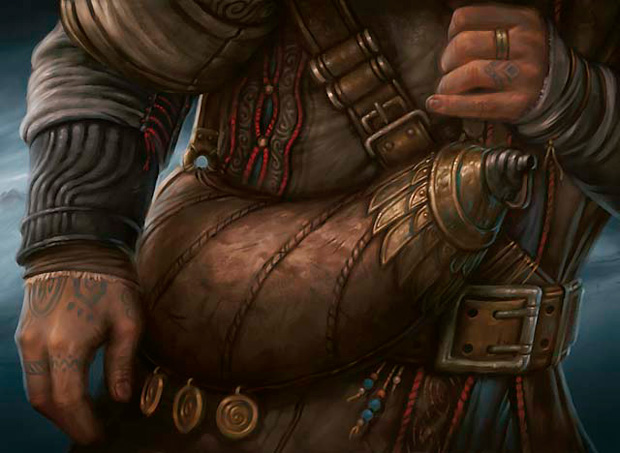 I was surprised to hear how highly some of the commenters in last week's forums rated Adventuring Gear. Up until last week, I was under the impression that Adventuring Gear was being undervalued almost across the board. Apparently there is some more love for Adventuring Gear out there than I thought there was. In fact, there might be a little bit too much love for it.

Because I tend to draft very aggressive decks in Zendikar Limited, I like Adventuring Gear more than most. I will almost always play it in my decks, and I will sometimes take it quite high. That said, it just isn't good enough to take over a top-notch removal spell like a Burst Lightning, a Hideous End, a Disfigure, or a Journey to Nowhere even if you do put a high value on leaving your options open early in a draft.

When it's at its best it's good, but it still isn't great. And there are plenty of times when it's not actually going to live up to your expectations.

Adventuring Gear is really only good in very aggressive decks. So while it doesn't require you to commit to a color, it does require you to be in a certain type of deck to really exploit it. And that's practically as big of a commitment as a mana symbol is.

Posted in Limited Information on November 24, 2009