elcome to Enchantment Week! Enchantments hold a fascinating and quirky position for us, Limited enthusiasts. Some of the most powerful spells of all time have been enchantments and, likewise, some of the worst Limited cards are also enchantments. We're going to talk about enchantments from a big-picture perspective this week, then drill down into some Theros-specific goodness a little later.

Let's start with some generalities we can make about enchantments to help us locate where they lay in the Limited landscape. They affect the board, but generally not in a creature-like way. Enchantments can't attack or block (more on that later), yet they do give us something beneficial.

They tend to have static effects, although they can also come with activated abilities. Enchantments can act as removal, make your creatures bigger or better, draw you cards, fix your mana, or even be game-ending bombs.

Enchantment is the most vague permanent type in Magic. Everyone immediately knows what a creature is. Same with artifacts, and even sorceries. But an enchantment can be so many different things, it's hard to pin down exactly what to expect from one.

The first card that comes to mind when I think of good Limited enchantments is Pacifism.

One of white's best removal spells, Pacifism is a beautifully designed and executed card, and a powerful one at that. Dating all the way back to Mirage, Pacifism has to be one of the most riffed-upon Magic cards. From Faith's Fetters to Prison Term, Recumbent Bliss to Cage of Hands, Arrest to Bound in Silence and Bonds of Faith, Pacifism is a historic canvas on which many great cards were painted.

Pacifism effects are so pervasive in Limited culture at this point that it's customary to look through the preview cards just to see what the Pacifism variant looks like for the newest set. Interestingly, some sets forgo this inclusion, Theros being a recent and notable example.

Removal in the form of enchantments has always had its ups and downs. Sometimes it's much better to neutralize a threat and leave it sitting on the battlefield. More often, though, the risk of having the enchantment removed—say during combat—is real. Sacrifice effects, bounce spells, or protection abilities also mean that an enchantment could be more temporary than initially intended.

Helper enchantments are enchantments that boost certain aspects of the game for the controller of the enchantment. The first thing that comes to my mind are "anthem effects," or cards like Glorious Anthem (and prior to that, Crusade).

Even though cards like this do nearly nothing on their own, they are powerful enough effects to warrant inclusion in our decks most of the time. The bar is high, but once the power threshold is met, the right enchantment can make or break a game. Cards like Collective Blessing push the power envelope of a helper enchantment.

Some enchantments are even worthy of the ultimate Limited moniker: a bomb.

Here are a couple of recent examples of enchantments gone bonkers. These cards had a sense of inevitability associated with them that few other cards could provide. If left unanswered, this type of card would completely dominate the game.

The best part about hyper-powered enchantments—and enchantments in general—is how difficult they are to deal with. Enchantments are perhaps the most difficult permanent type in all of Magic to interact with. Blue, black, and red just don't have it in their color pie DNA to touch them, and even green and white usually need specific sideboard-type cards to destroy them. This means they occupy a cozy little niche in the Magic world, and it's a good place to be if you are a permanent.

Auras have some of the best flavor in Magic. You cast a spell on something, and that something is now changed because of it. It's simple but effective storytelling. Even a Nuts and Bolts Spike like myself can appreciate that.

But the Spike in me cringes a little when I see the word "Aura" on a card. Especially the "enchant creature" variety. I know that there are times when taking on the risk of getting two-for-oned is correct, but I try to avoid it when possible. Cards that stand on their own are so much more desirable when building Limited decks. Creature Auras have to represent either a very high power level or a unique effect that I can't get elsewhere to be happily run in my twenty-three.

If you haven't taken notice yet, enchantments are a big part of the landscape in Theros. A few new permanent types were even introduced, including enchantment creatures. While the bestow mechanic adds an interesting and flexible twist to the creatures, the fact that they are enchantments is usually a drawback once they are on the battlefield. Even though you can get the occasional value boost from a card like Lagonna-Band Elder, the majority of the time these enchantment creatures are opened up to removal like the following: 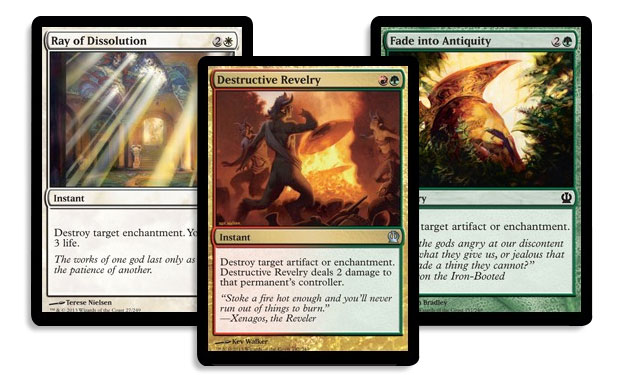 Generally, Naturalize effects—cards that can destroy artifacts or enchantments—are better left in the sideboard. They are considered fringe playable in some Limited formats, simply because there are enough enchantments and artifacts running around to find a target for them. But when you make some of the creatures in the format enchantments in addition to creatures, they move up the scale sharply. Using a Naturalize effect to destroy a bestowed enchantment creature is the cleanest way to deal with these pesky, resilient threats.

There are twenty enchantment creatures in Theros, and even though only fifteen of them die to all of the Naturalize effects in the set, that is still more than enough to consider throwing in a Ray of Dissolution or a Fade into Antiquity. An interesting note about Fade into Antiquity: It is one of the only ways to deal with one of the legendary enchantment creature Gods.

Add to that the fact that if your removal of choice happens to be instant speed, you can do some work with it if used in combat on a bestow creature that is pulling double duty as an Aura.

I know they are mythic rare, and therefore you won't see them that often in Limited. Still, I have to write a little about these awesome cards. And by awesome I mean awesomely designed. As good as they are, in Booster Draft I think they are perhaps not quite as amazing as they look on paper. Since most Limited decks are two colors, getting the necessary devotion to turn these into true destroyers can be quite difficult. 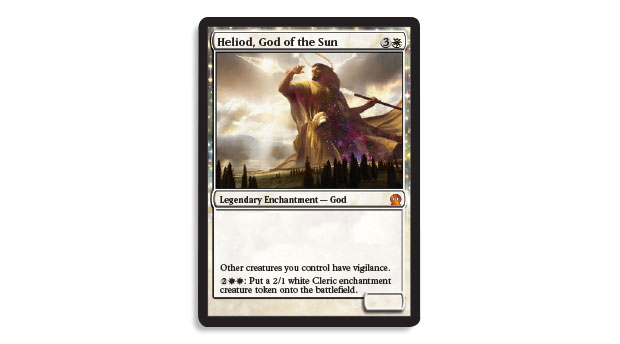 How good is this card? It would fall in the helper enchantment category, although it does offer some form of inevitability. Producing a 2/1 Cleric every turn is powerful, although using

to do it is pretty darned expensive.

A card like this would be great in a stalled board, good if you were winning, and difficult to manage if too far behind, as it takes essentially a full turn's worth of mana to activate.

To be fair to old Heliod here, adding back that whole "Indestructible 5/6" thing pushes him right back over the top. Still, I can't help but imagine a scenario where you never get to activate it, and our aggressive opponent simply runs us over in the meantime.

Don't get me wrong here, either. I would still pick the Gods early and often in Booster Draft. I just feel that it's important to keep perspective on everything—even bombs. Remember to look at cards through different lenses. Look at each of the Gods and see how each would perform if your devotion never reached the requisite levels.

My guess is that you would run them, but that they would often be considered a bit clunky.

Even though enchantments have been around since the very first set of Magic cards was produced, it makes me happy to know that the makers of our game are still not shy about trying out new directions for old card types. The flexibility and power of bestow, combined with the sheer coolness of the legendary enchantment Gods, tells me that enchantments still have a lot of life left in them. I look forward to seeing where they end up, and how they change going into the future.