For Every Color There is a Creature

he Magic 2013 Prerelease is about a week and a half away, and I've got some pretty exciting preview cards to show you.

Two weeks ago, I previewed a cycle of five pieces of uncommon Equipment that are sure to become Limited staples this summer. This week, I've been given another cycle to preview.

This time, they're all creatures—and they all promise to be very early draft picks for appropriately colored decks.

Ready to see them?

In their day, Watchwolf and Boggart Ram-Gang both played big roles in Standard. Now Flinthoof Boar, which can either be a two-mana 3/3 or a three-mana 3/3 with haste, seems poised to have a similarly big impact on Constructed. Heck, even if you can't find a Mountain to boost your Flinthoof Boar, you're still getting a 2/2 for two—which, while far from a good deal, is still a reasonable threat for a low cost. 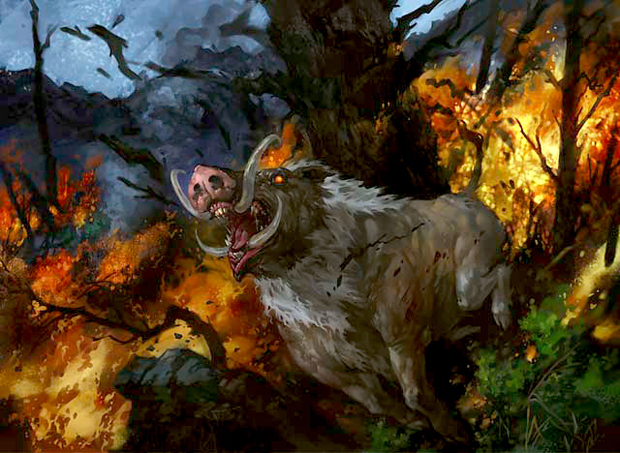 In Limited, I'm often willing to pay four mana for a 3/3 creature with no abilities—so, needless to say, I'm more than willing to jump through hoops in order to play a 3/3 for only two mana.

If you have any sort of reasonable follow-up threats to go along with your Flinthoof Boar (or a removal spell and a pump spell), your opponent is going to have do some serious work in order to claw back into the game.

While Flinthoof Boar will probably have the most Constructed applications of the creatures in this cycle, I'm fairly certain .

In its day, Vampire Nighthawk was one of the most feared cards in Zendikar Limited. If you played a Vampire Nighthawk on turn three, and your opponent didn't have a removal spell for it, you would be able to immediately get yourself off to a huge lead. 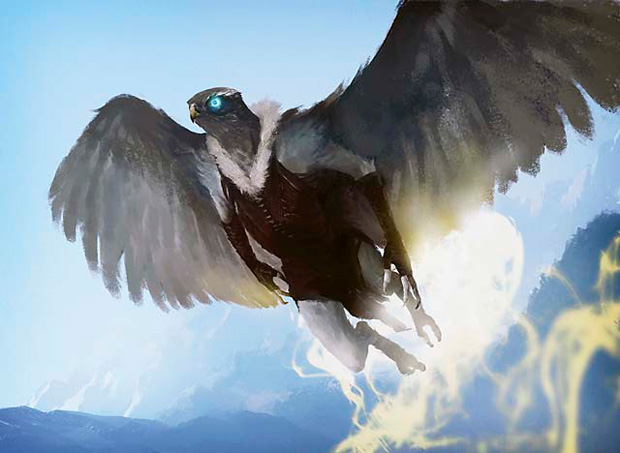 Although Arctic Aven isn't quite as resilient as Vampire Nighthawk, and it might not have the same defensive capabilities, it is nearly peerless when it comes to offensive talent.

When it's uncontested, Arctic Aven is almost impossible to race against, giving you a 6-point life swing every turn. And even if your opponent does have a blocker, you will be able to leave your Arctic Aven back (forcing your opponent to leave back a defender or two in the process) until you find either a way to break past your opponent's defenses or an even bigger threat with which to take over the game.

A large portion of Magic 2013 is still waiting to be previewed (if you're curious, you can see every card in Magic 2013 that has been previewed at the Magic 2013 Card Image Gallery), but even with my limited knowledge of the set I'm confident there will only be a handful of cards I will take over an Arctic Aven, Pick 1 Pack 1.

When I'm playing defensive black-blue decks, I will often groan about the fact that I don't have many clear ways to close out stalemated games. Sure, I'm often able to scrape together victories through attrition, or by having one more flier than my opponent, but there are still plenty of times when I'll be scraping my way toward a victory but—before I can actually finish the job—my opponent draws his or her bomb (that I've provided more than ample time to find) and kills me in short order.

An unblockable 3/3 is a great victory condition, and it's simultaneously a strong early threat that can allow you to pick up some quick wins if your opponent stumbles even a little.

Oh, and if your opponents think they're going to stabilize with some big blockers, they can kiss that idea goodbye as you make your Harbor Bandit unblockable and cruise to victory. 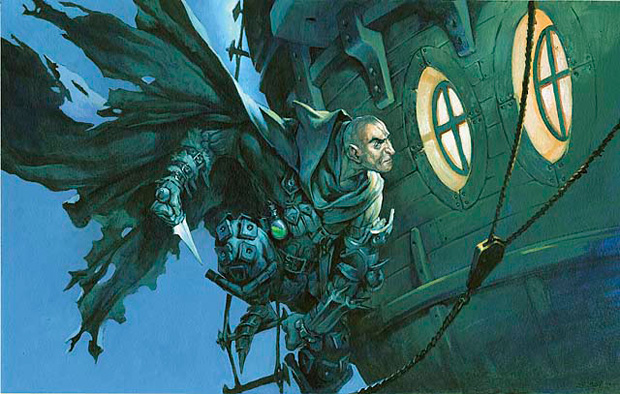 One strike against Harbor Bandit is that a three-mana 2/2 is far from a desirable card in Limited. So if you don't have any Islands in your deck, Harbor Bandit will probably end up sitting in your sideboard (while, say, Arctic Aven is still a very reasonable card in blue decks that don't have any Plains in them). But if you're able to splash even a couple of Islands in your black deck, Harbor Bandit is probably going to be a good addition (just be careful not to mess up your mana too much for it!).

Early on, Crimson Muckwader is going to be something of an unstoppable force, just pounding through turn after turn while your opponent can do little more than take the hits and hope to find a 4-toughness blocker.

And if you find yourself backpedalling a bit and struggling to find productive things to do with your mana, Crimson Muckwader is a great creature to have on defense. Even if your opponent's creatures are big enough to survive through a tussle with Crimson Muckwader, you still get to neutralize even the biggest (non-trampling, non-evasive) threats in the format. 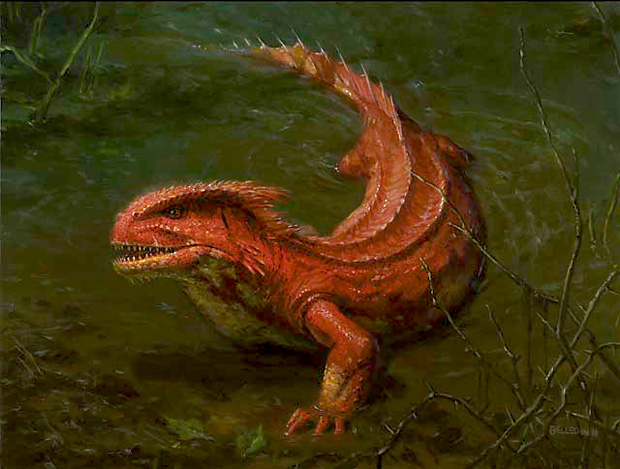 Oh yeah, and let's not forget that Crimson Muckwader is still a 3-power creature for two mana in a black-red deck.

In Magic 2012 Booster Drafts, I was happy to include Goblin Pikers in my black-red decks (which could never be any better than a 2/1 for two without some serious outside assistance) because cheap creatures were so important. If I had the ability to add a Crimson Muckwader to any of my black-red decks last summer, I very well might have done a little dance around the draft table (or the glowing light of Magic Online radiating from my laptop).

If you're looking for a creature that promises to be relevant at every stage of the game, you'll be hard pressed to find a better option than Crimson Muckwader.

I'll admit it. When I first went through this cycle of cards, Prized Elephant looked like a (relative) dud to me. And compared to Flinthoof Boar and Arctic Aven, .

But then I thought about it a bit more and realized just how spoiled I had become.

Was I actually sitting in front of my computer dismissing a 4/4 for four mana?

And while it makes (some) sense to do that in the context of this cycle of cards, we're still talking about a 4/4 for four mana! 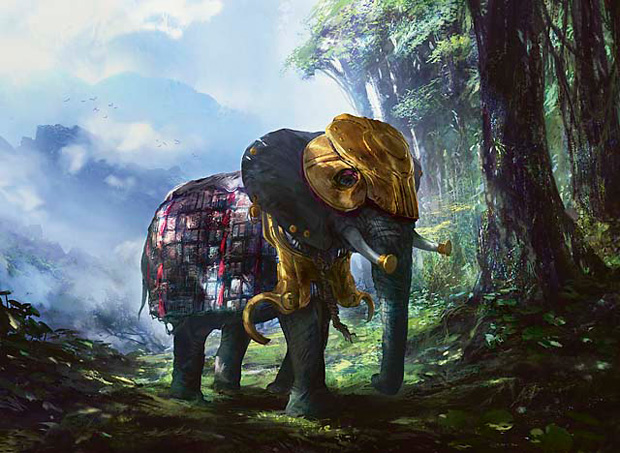 I know I'm going to be more than happy to first-pick Prized Elephant for any deck that has the mana to support it, as it's sure to be one of the most efficient threats in the set.

So remember, the next time a card looks like it's "disappointing," take a step back and try to gain some perspective on the situation. Not every card is going to be a flying 3/2 lifelinker for three mana.

Prized Elephant is a good card. No, it isn't great, but it still promises to serve a very important role in a lot of Limited decks.

Aside from Harbor Bandit, I can see myself guiltlessly including every one of these creatures in decks that don't have the appropriate support color. At the end of the day, 2/1 fliers for three, 2/2s (or 2/1s) for two, and 3/3s for four are all reasonable filler cards in Limited decks.

Plus, your opponents might not know you don't have the secondary color of appropriate mana anywhere in your deck and might rush to use a removal spell on your Arctic Aven or your Crimson Muckwader so they don't have to deal with it at full power later. 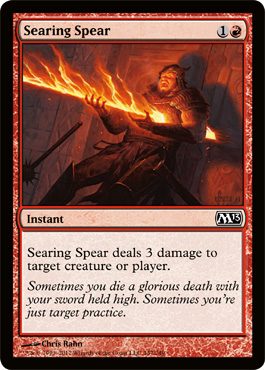 It's always good to have some lightning rods on hand.

And then there will be times when you're playing a black-green deck that has a light red splash for a Chandra, the Firebrand and the upside on Flinthoof Boar, or a black-red deck that has a couple of Islands in it for some card drawing and the ability to make Harbor Bandit unblockable.

So while I wouldn't want to blindly include a Forest in my deck so I could have a chance to give my Prized Elephant +1/+1, I could easily see myself including a Plains for an Arctic Aven or an Island for my Harbor Bandit if I'm short on victory conditions.

Just be careful not to screw up your mana too much in the process. If you have a lot of color-intensive spells in two colors, it might not be worth it for you to add any off-colored lands to your deck.