card that is universally considered great in Limited one day could be considered merely good a week later, while a card that is dismissed as being completely unplayable might turn out to be a true gem that is worthy of being first-picked once people discover the right applications for it.

The fact is, cards shift in value (sometimes quite dramatically) as people gain more experience with a format.

Sylvok Lifestaff, for example, would frequently go around tenth, or eleventh until it made its way into a dedicated Equipment or aggressive metalcraft deck—or simply ended up collecting dust in peoples' sideboards. But after just a couple of short weeks of playing the format, Sylvok Lifestaff became a valuable commodity that players were, and still are, willing to fight over.

Golden Urn was once considered borderline unplayable—only being used by people who desperately needed an extra artifact for their metalcraft decks—or an extra card to sacrifice for their Furnace Celebration decks.

Then the card started to pick up steam. Yes it's "just a life-gain card." And it's true that it doesn't do anything to effect the board. But for the low price of one mana, Golden Urn can actually be a pretty strong card to add to slower metalcraft decks that need to get three artifacts early, and often need to claw back into games that they've fallen behind in.

While Golden Urn still isn't an early pick, it's certainly not a card to scoff at.

(I would like to use this space to mention that I'm still in a little bit of pain from the time last week that my friend Gabe used a Twisted Image on my Wall of Tanglecord—but that's neither here nor there.)

Remember how people didn't care about Spellbombs early on? That sure changed fast, didn't it!

Up in the Air

While (rough) consensuses have been reached on the valuations of many cards, that isn't the case for every card. Not by a long shot.

Even though we've been playing Scars of Mirrodin Limited for months, there are still a lot of cards that people disagree pretty strongly about. 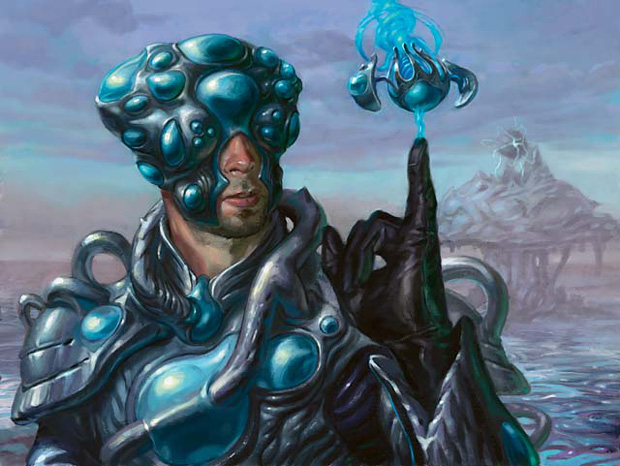 Riddlesmith comes to mind as a prime example of a card that some people absolutely love while others want nothing to do with. Me, I'm a member of the latter group.

Sure there are times where I'll play it, but I won't be particularly happy about it. 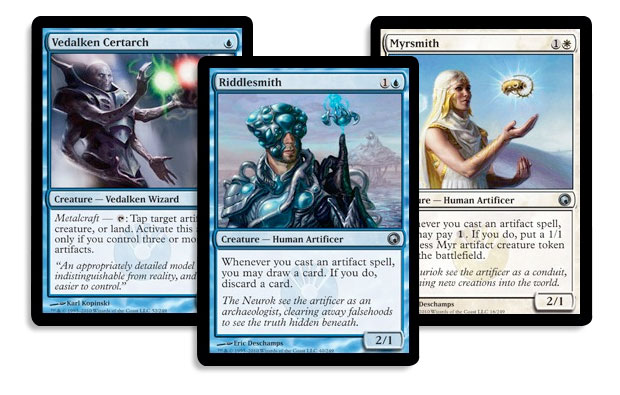 The thing is, in a deck with a ton of artifacts, you only get to play so many colored spells. If you're going to play seventeen artifacts, you are only left with room for six to eight nonartifact spells. I want at least three of them to be tricks/removal (though I would prefer to have more). Then I want to have a couple of true metalcraft cards such as Vedalken Certarch and Myrsmith (gotta take advantage of all of those artifacts!).

After all that, I really don't have much room left—and I'd generally rather have a good threat like Sky-Eel School to fill out my deck than a Riddlesmith which may or may not help me smooth out my draws.

The thing is, early in the game you need a bunch of lands and a bunch of spells. Even if you are able to use Riddlesmith to help you filter a bit, it's going to come at a high cost.

So if I have the opportunity to start my game with a mana Myr or a Riddlesmith, I'm almost always going to go with the mana Myr. If I'm not attacking or blocking with my Riddlesmith, and I'm only getting a little bit of value by using its ability, what's the point?

Then, later in the game, it's unlikely that I'm going to have that many artifacts to trigger him. So I'd rather just have a card that is going to have a consistent impact on the game.

Kuldotha Phoenix is considered to be an absolute slam-dunk first-pick by many. Then there are others who see the

in its casting cost and look for any other competitive option in the pack. 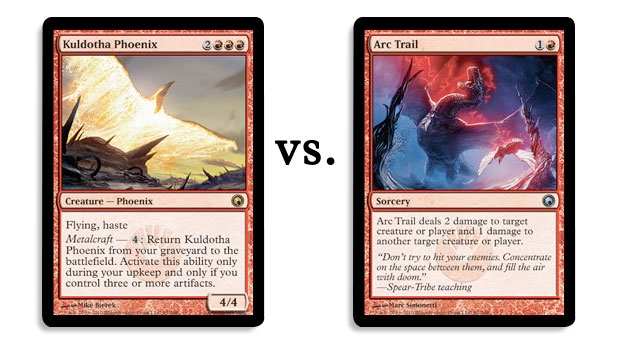 A couple of months ago, I saw a Twitter conversation about Arc Trail versus Kuldotha Phoenix. At that point, I thought the answer was Kuldotha Phoenix, but it was close. If I had been asked that question at the Prerelease, I would have said Kuldotha Phoenix and it wasn't particularly close.

Now I think the answer is Arc Trail and it isn't close.

Don't get me wrong—I still think that Kuldotha Phoenix is an excellent card. If I'm confident that I'm going to be able to cast it, then I will take Kuldotha Phoenix over almost any other card in the set. But if it's early in the draft, I don't want to feel like I'm married to playing 10+ Mountains just so I can play with a single 4/4 flyer.

Over the course of a Limited format's lifespan, my personal valuations of cards can shift pretty dramatically. This goes beyond the macro value changes that occur as everyone learns more about the format.

For a while, I thought that Carapace Forger was awesome because of the ease at which I was able to get fifteen to eighteen playable artifacts in my first few experiences with the format. I still like Carapace Forger more than most, but I now understand that it really isn't the kind of card that is worth going out of my way for.

Tumble Magnet was one of my favorite cards in the set. Then, for inexplicable reasons, I stopped loving it—and barely wanted to see it in my decks. A few weeks later Tumble Magnet and I got back together and I couldn't be happier about it.

Sky-Eel School hasn't gotten much love over the past few months, and it certainly took me a while to warm up to the card—but now I'm happy to take it pretty early given how much I like blue and how good it is in the non-metalcraft blue decks that I like to draft.

Turn Aside is a pretty excellent card to have around. If I have a couple of key cards that I feel I really need to protect, then I will do everything I can to make room for it in my starting forty.

But even if Turn Aside doesn't make its way into my main deck, then I will be more than happy to bring it out of my sideboard against removal heavy decks. Countering a Turn to Slag, a Slice in Twain or even just a Revoke Existence can make a world of difference for you, particularly if you are able to catch your opponent off guard by doing so (and let's face it, how many opponents are really expecting you to have the Turn Aside?).

Many (myself included) considered Chrome Steed a first-pick quality card for quite a while. Now, I'm pretty unlikely to take a Chrome Steed unless there's really nothing else in the pack, or it's pack two and I already have a dozen good artifacts. In a dedicated metalcraft deck, Chrome Steed is still quite good, but the rest of the time ...

Early on, Glint Hawk was a huge card for me. When the set first came out, I would first-pick Glint Hawk without batting an eye. I wouldn't be ecstatic about it—it was the perfect card for the types of aggressive white decks that I wanted to draft, particularly when cards like Origin Spellbomb, Accorder's Shield and Sylvok Lifestaff were regularly making their way around the table.

The way that I (typically) draft aggressive white decks has undergone some significant changes since the first time I cast a Glint Hawk (returning a Necrogen Censer in the process).

At first I favored Equipment-based decks—and I found myself suiting up Sunspear Shikaris and Auriok Edgewrights like it was nobody's business. Then the Equipment started drying up. Players learned that cards like Sylvok Lifestaff are strong in pretty much any deck. Once I started having trouble picking up enough pieces of Equipment, it was time to move on.

Then I was all about white metalcraft. Auriok Sunchasers were (and still are) easy to come by and pack quite the wallop for the low cost of

I know that infect can be really strong, but nowadays I pretty much refuse to draft the deck unless I open a Hand of the Praetors. And even then, if there's something like a Galvanic Blast or a Trigon of Corruption in the pack, then I still might pass on the poisonous lord. 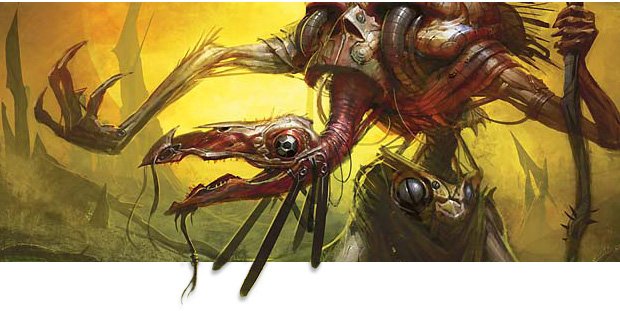 I have a number of reasons for staying away from infect—some of these reasons are good, others sound good but really don't stand up to careful inspection. Regardless of whether or not I could gain some extra equity by being open to the possibility of drafting infect—the bottom line is, I don't have as much fun playing infect as I have playing with most other strategies. 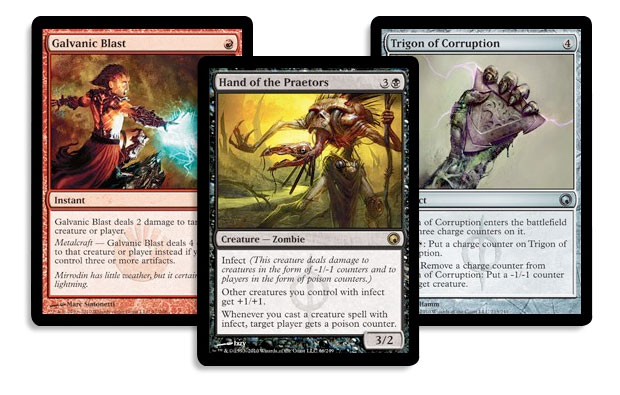 I don't have any major Scars of Mirrodin Limited events to prepare for—so I don't need to worry about absolutely mastering the format. I'm only going to play in a few more triple Scars of Mirrodin booster drafts—so I might as well have as much fun as possible while I'm doing it!

That means that I'm going to be drafting the kinds of decks that I love to play.

I'll have drafts where I take Glint Hawk Idols, Neurok Invisimancers, and Sky-Eel Schools way earlier than I probably should because I just really want to be white-blue beatdown. Then I'll have other drafts where I first pick a Furnace Celebration and immediately move in.

Proliferate decks that look to abuse Thrummingbird? Don't mind if I do!

I'm taking any Palladium Myr I can get my hands on, to maximize my chances of playing a turn-four Alpha Tyrranax (roooooar!) 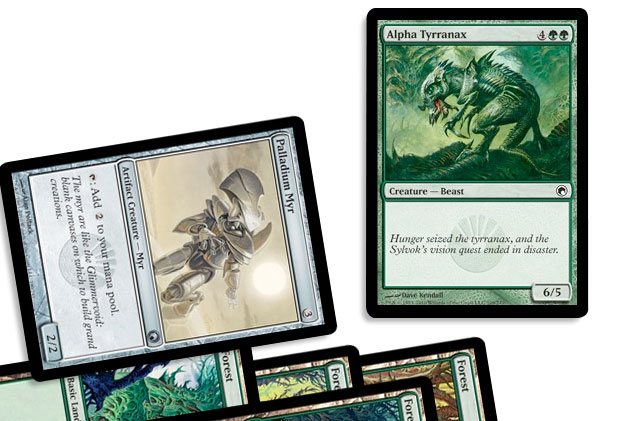 So while you're enjoying the waning days of mono Scars of Mirrodin Limited, I'd like to recommend that you try to have as much fun as possible with your drafts. Do something wacky, play too many colors, try that card you've always been meaning to play, equip a Soliton with a Heavy Arbalest, first-pick that Furnace Celebration, play that Relic Putrescence deck ...

Alright, maybe you shouldn't do that last one, but I meant what I said about the others.

I'll be back next week with an exclusive Mirrodin Besieged preview!