Posted in Limited Information on August 23, 2011

I was browsing through my Twitter feed last weekend, and the following exchange caught my eye: 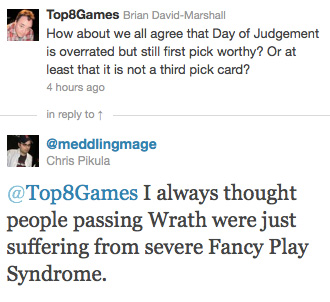 You might already be familiar with Fancy Play Syndrome. And even if you had never heard of it before today, you've probably inferred the gist of the term's meaning through context. But just because you have a working understanding of the term doesn't mean you're immune to the syndrome.

You probably want to look smart and/or cool when you're playing competitively. This completely natural desire for recognition and instant gratification (even if it's just for yourself) makes players susceptible to Fancy Play Syndrome.

Fancy Play Syndrome occurs when you make plays, draft picks, or deckbuilding decisions that are too complicated for the level of opposition you are facing, or when you come up with overly creative solutions for a problem when a straightforward approach would be far more effective. 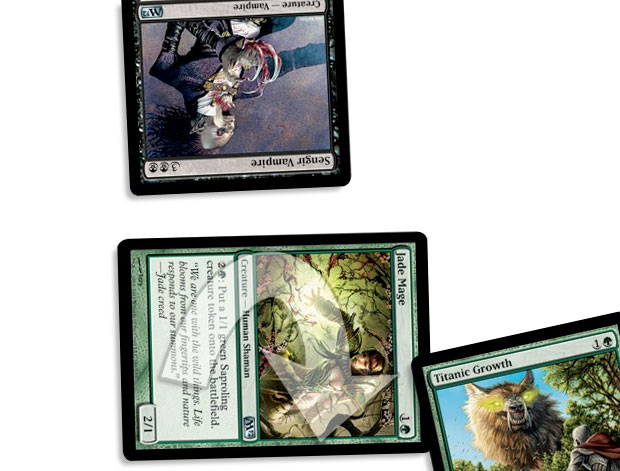 If you try to bluff a novice opponent by attacking your Jade Mage into Sengir Vampire, then you will probably induce a block and a chuckle from your opponent (who is quite amused by the fact that you would attack your littler creature into a bigger creature).

But if you make that same attack against a seasoned veteran, that player will understand that there is a strong possibility that you have a Titanic Growth (or at the very least a burn spell) and will carefully consider that information when deciding whether or not to block. While this more experienced and more skilled opponent might still choose to block , you can sleep easy knowing that there was at least a reasonable chance that you would have been able to steal 2 points of damage with your bluff (which might be hugely important if your plan is to end the game quickly).

If you try to force Mono-Green at a Pro Tour, when you are surrounded by players who you suspect have a huge distaste for green, then you could end up with a particularly awesome deck while your neighbors fight over the other four colors. But if you try to force a Mono-Green deck at a draft full of relatively inexperienced players who don't have a great understanding of the format, or strong color preferences, then you will probably end up with a disaster on your hands (when you would have been able to put together an excellent deck if you had just sat back and paid attention to what color(s) seemed to be open).

A tendency to overestimate your opponents, and/or a temptation do cool things (simply because they are cool, for your own amusement, or to impress others) can allow you to snatch defeat from the jaws of victory as easily as the most boneheaded of mistakes.

If you're playing casually, and you don't really care about winning, then Fancy Play Syndrome isn't something that you need to worry about. But when you are actively trying to take down a tournament, Fancy Play Syndrome can be a bigger hindrance than mana problems.

It's great to think outside of the box when you're playing Magic—but you need to recognize when you are trying to do something that defies common logic because you're trying to learn something, because it's actually the right play, or simply because it's "cool."

There's a lot to be said for trying things that might initially seem bad, wrong, or fancy, in an effort to learn more. Sometimes decisions that appear to be flat-out wrong when players begin making them turn out to be the norm later on. If you had played 18 lands in a 40-card Limited deck in 1994, people would have felt bad for you since you clearly didn't understand that you only needed to play 13 or 14 lands...

But the players who chose to add more and more lands to their decks (because they really wanted to cast their spells) helped to propel Limited into the modern era, to the point where now, if a player showed up to a Sealed deck tournament today and played 13 lands, that player's friends might very well stage an intervention to explain the importance of playing 16-18 lands in Limited (in all but the most extreme of circumstances).

You might realize that you need to Fireball your opponent's Llanowar Elves on turn two because you don't have a two-drop, and you don't think that you will be able to keep up if your opponent is able to get to four or five mana quickly. 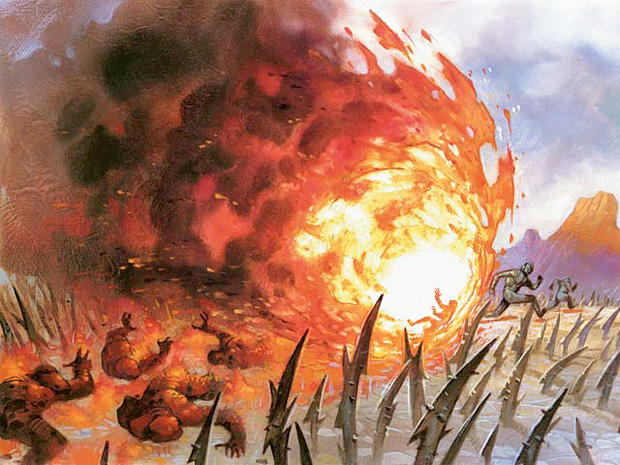 Sometimes it will turn out that you just out-thought yourself, as you actually had a draw that could keep up with most things that your opponent could present, and a few turns later you'll find yourself wishing that you hadn't burnt your Fireball on an accelerator. But if your assessment of the situation was correct, then you will give yourself a good chance to win a game that you otherwise wouldn't have even been a part of.

It's important to realize that the play is a possibility; if you confine your Fireballs to a specific role as a dragon-slayer / finisher, then you will give up a ton of equity by waiting to do the coolest thing possible with your red X spell. That doesn't mean you should always Fireball your opponent's Llanowar Elves on turn two. Not by a long shot.

When you have a Fireball, just take a deep breath, carefully consider your options, and try not to fall victim to Fancy Play Syndrome. Fireball's extreme versatility should be used to your advantage—not as an excuse for you to pigeonhole it into a specific role that you think is cool.

Back to the Lab Again

When players are just beginning to get their bearings on a format, they won't have a clear understanding of all the cards, and archetypes, that are going to end up thriving over the following months. Consequently, even if a player wants to draft something that has been traditionally successful, he or she might end up being very surprised by the results. So whether they like it or not, players are forced to experiment early on in a format's lifespan—all the while developing their fundamental understanding of what matters in the format.

During a player's first few Magic 2012 drafts, everyone at their draft table might try to put together decks that are designed to thrive in the mid to late game (since hyper-aggressive strategies were rarely seen in Magic 2011 Limited). In that situation, an extremely slow Blue-Black Control deck could dominate.

But while a slow, grinding Blue-Black Control deck that eschewed the early game almost entirely could be quite effective in M11 Limited, or in M12 Limited during the format's infancy, a deck like that would get trounced in an M12 draft full of players who are familiar with the format. It would simply be too slow to compete, even if it had the best late game at the draft table. 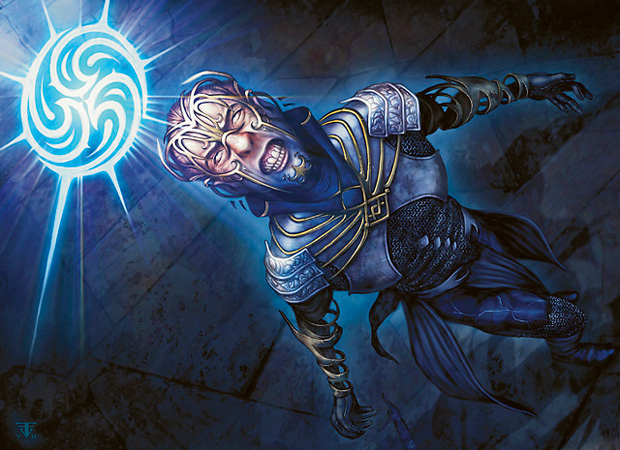 You draft, you learn, and then you relearn things. Once you get towards the end of a format's lifespan, you will find players gravitating towards strategies and cards that they know are quite effective within the context of the format at hand. 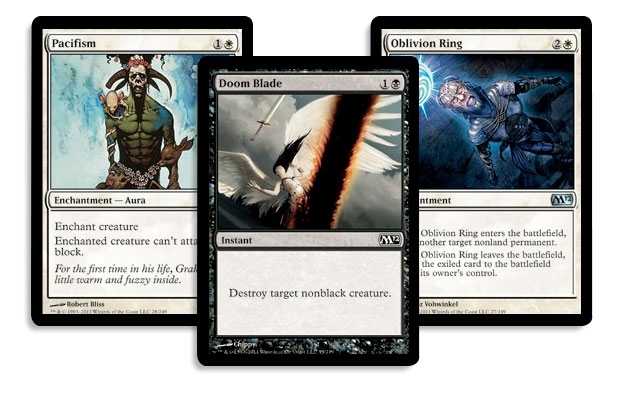 If you've been drafting M12 regularly, then you know how good cards like Oblivion Ring, Pacifism, and Doom Blade are. You've played with and against them countless times, and they end up having a big impact on almost every game in which they are played.

In fact, when you play against an opponent who misuses one of these premium removal spells, you'll know immediately that you've gained a pretty sizable advantage. But while you've had a half-dozen Oblivion Rings in various white decks, you might not have a strong sense of how good a rare like Day of Judgment is because you've only played with it once, and against it twice. As a result, you're going to have to rely on more than just your limited experiences with Day of Judgment when making decisions that involve the board-sweeping rare.

On another comment thread regarding Day of Judgment from this past weekend, a player mentioned, "I don't like it [Day of Judgment] much, pretty much forces you to draft a bad deck... How about taking Oblivion Ring over it?" 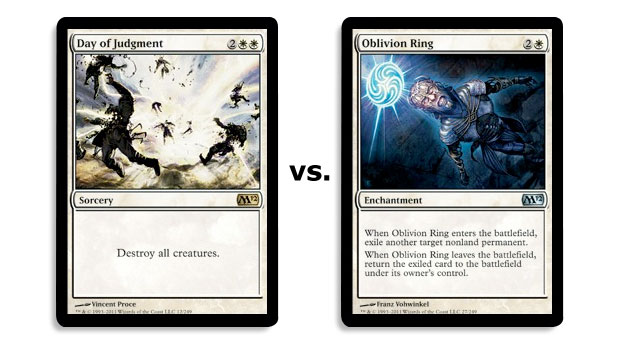 The crux of this argument is that the best decks in Magic 2012 Limited tend to be fast, tempo-oriented decks that want to curve out quickly—and Day of Judgment isn't great when you want to cast creatures on each of the first four turns. Instead, you would usually rather have an Oblivion Ring to just deal with your opponent's best threat (all the while keeping your onslaught going). 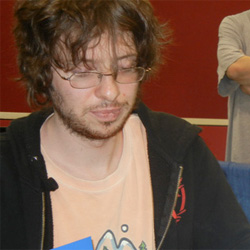 However, the fact that most players are looking to put together extremely fast starts (which they back up with removal spells and tricks that allow them to press their advantages) makes Day of Judgment even more potent than it would be in other, slower formats.

Limited guru Tim Aten, who was recently seen battling his way to the Top 4 of Grand Prix Kansas City, posted in the same thread explaining that: "I think Day is flat underrated in this format. It's easy to smash people with it since everyone's so obsessed with curving out, so it is, as mentioned, a legitimate bomb (unlike in M11 where it was pretty underwhelming)."

So yes, it might seem cool to flex your knowledge of M12 Limited by forcing single-mindedly aggressive strategies, but if you're passing Day of Judgment, you're probably suffering from severe Fancy Play Syndrome.

Posted in Limited Information on August 23, 2011