ver the last two weeks or so I have flown almost 30,000 miles. It's a staggering number. Normally, I would take that time to do some skydrafting—the act of drafting on Magic Online while on a flight—but these were international flights with no Internet connection available. So instead of playing, I had a lot of time to think about Magic. I also was flying to cover professional Magic events, for which I needed to prepare anyway. I came up with a lot of cool ideas for the column and I'm excited to share them with you over the coming weeks.

That said, when I got home, I looked up the schedule and saw that it is Fated Week here on DailyMTG.com. I'll admit it isn't the most exciting topic for us Limited players. There is a cycle of rare cards that share the Fated name. Going super in depth on rares is usually not a great idea for the column, as you will not see them too often in Draft or Sealed.

I figure a little one-two punch will be the best route to value here. 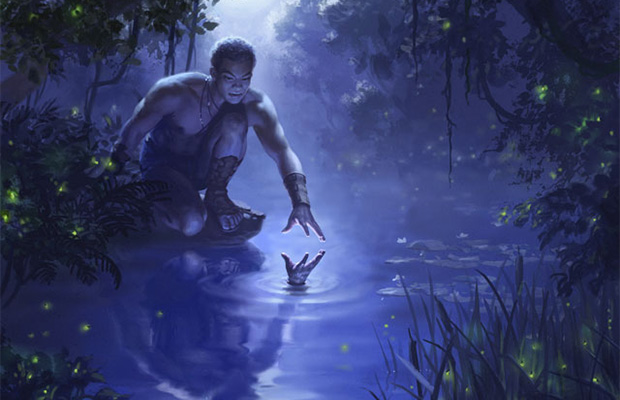 Before we dive into individual cards, I want to highlight something about the entire cycle of Fated cards: they all have triple-mana colored mana costs. This is a huge deal. Splashing these is completely out of the question, and even running them can become troublesome if they aren't in your main color.

We have rare, triple-color mana-cost cards. They had better be powerful, right? That's what you should be thinking. For the kind of payment we are giving up, these should be huge effects that essentially win us the game. Any card that costs a total of seven mana and has triple mana color requirements has a steep uphill climb toward acceptance. Let's see how each of these stacks up.

Fated Conflagration is the easiest one to evaluate. Since the Planeswalker clause comes up so infrequently, it's basically just "pay four mana to kill something." Removal is an easy sell, even if it costs triple red to cast. By the time you can actually cast it, Fated Conflagration is still killing relevant threats.

I'll run this card in any base-red deck, and be pretty happy I have it, too. Remember that if you are planning on getting a two-for-one by playing your Fated Conflagration on your opponent's turn, you may want to reconsider and just fire it off on your main phase. The reason for this is because of the scry 2. If it's a late stage of the game, the chance your opponent draws a relevant Aura he or she wouldn't have already cast is quite small. Contrast that with the raw power of scry 2, and you can see that this isn't the time to get too cute.

First things first: let's not confuse this with a normal three-mana spell. Triple blue means you are way more likely to cast this later in the game, which is fine anyway, since that's when the best targets for it are on the battlefield.

Speaking of targets, there are two major talking points for this card:

Overall, this adds up to a fairly lackluster card. One of the big upsides is that you can do this at instant speed, perhaps during combat. Unfortunately, this line of play takes away the whole scry 2 thing. Again, this card fails to impress. I would be hard pressed to play this in anything outside of an eleven/six mana base in favor of blue.

Fated Return costs seven mana. This is the number one thing to remember about it. It is also somewhat conditional in that occasionally there won't be anything reasonable in a graveyard to bring back. The good news is that it can target creatures in either graveyard. Additionally, there is a twist where the returned creature gains indestructible. This is a big deal, as even the lowliest creature can block indefinitely as long as it has indestructible.

This can be done at instant speed, and within combat. So you can definitely get some value back, but the fact that this card costs seven mana, has a tough mana cost requirement, and is somewhat conditional means that it's never going to be an automatic first pick.

Throw it in a controlling deck with good removal and some incidental mill, and I think this card is fine. Just be ready to pull it from the main deck when your opponent leads with Plains into Island or Plains into Mountain. This is not the card you want clogging up your hand while your opponent curves out.

Fated Intervention is a card I can get behind. It asks little of us in the way of graveyard or battlefield scenarios, and gives us an aggressively costed 6 power and 6 toughness for five mana. Adding to this is the fact that the Centaurs are two separate creatures, which lends flexibility in blocking.

Green is the color most likely to have some fixing or acceleration as well, making the triple-mana-cost burden a little lighter. The most interesting thing about Fated Intervention is the dilemma of when to actually cast it. The scry effect is powerful, but not quite as good as outright ambushing some attackers with a well-timed "Centarmy."

This is my personal favorite of the cycle, with Fated Conflagration coming in second.

I think this may be the most overrated of the fated cycle. Board-sweeping effects like this are traditionally very strong in Limited because they offer something you can't get anywhere else. They are also just full of raw power, able to allow game wins when the caster had no business winning.

A normal sweeper play in Limited goes something like this:

We play no creatures while our opponent plays out a two-drop, a three-drop, and maybe even a four-drop. Then we fire off our sweeper and start collecting value. Unfortunately for Fated Retribution, this proven style need not apply. Instead, this thing costs a full seven mana to cast!

This means one thing for sure: You are going to have to cast your own creatures to block with simply in order to stay alive long enough to resolve Fated Retribution. This takes away a lot of the potential value since your creatures are dying alongside your opponent's.

Another knock on Fated Retribution isn't actually a knock on the card itself, but on the environment in which it resides. With so many bestow creatures running around, sometimes a board sweeper will leave behind a reasonable board state even after resolving.

It's important to remember that the person who decides when, if, and how the sweeper is played does have an advantage. I have opened and played one Fated Retribution in a draft. I was able to position the board such that it was pretty good, but I still feel like it's a bit overrated currently.

I selected a few cool two-card combos that you may or may not have seen in action during Theros block drafts. These range from cute to quite powerful.

In the same color, all you need is blue mana to really make this combo go off. Improve your future card quality while pumping your first-striking creature? Sweet.

First strike plus deathtouch equals lovely. It's so difficult to deal with a creature with both of these abilities in combat. Your opponent can't realistically attack or block once these two are on the battlefield. Essentially, every creature you get has the ability to attack or block and win combat.

Or any heroic creature

It requires some combat timing knowledge, but you can use Glimpse the Sun God to not only tap down pesky blockers, but also to get some nice heroic triggers on your applicable creatures. Here is how it works:

Go to the beginning of combat step, then to declare attackers step. Declare your attackers, but before blockers are declared, use your mana to put in a nice big Glimpse the Sun God targeting the blockers on your opponent's side, and your best heroic creatures on yours.

Since your creatures are already tapped from attacking, they will get away with just the bonus heroic trigger.

This combo was noted early in Born of the Gods season, and it's been hard to say if it's worth it or not. The idea is that you can enable inspired every turn while not needing to attack. This is a big deal, depending on which chair is best. You can substitute any of the inspired creatures for Aerie Worshippers.

The Lyre helps you stay alive deep into the long game, where your inspired cards can take over.

I used Stratus Walk as an example because they share the same color, but you can use any of the cantrip Auras here. The cheaper the better. Basically, the idea here is that you get a 4/4 for five mana in blue, and get to attack every turn while potentially drawing an extra card every turn, too. It can be a fragile setup, but I have gone off a bit with it before and it feels pretty good once it gets going.

I have been enjoying Satyr Wayfinder in some crazy four- or five-color decks as of late. One thing that I noticed, though, is that you end up with a lot of creatures and such in your graveyard. What better way to generate side value than by casting Rescue from the Underworld to get one of them back? Or heck, use March of the Returned to grab two of them back to your hand.

What two-card combos have you found in Born of the Gods and Theros? Let me know on Twitter or via the email below, as I'm always curious what you may find.