hen you have a very powerful card that could swing the game heavily in your favor, provided your opponent doesn't have an answer, you should be actively looking for opportunities to cast that game-breaking card where your opponent is unlikely to have an answer.

Sometimes you should play cautiously, and wait for a time when your opponent is very unlikely to have an answer to your game-breaking card so you can win the game pretty much on the spot.

But other times when you try to play around potential answers, you accomplish nothing other than to actively play into your opponent's plan and minimize the effectiveness of your card.

A friend of mine was playing the first game of a draft match last weekend with a pretty solid red-green deck. His deck had a very strong mid-game, and some pretty good end-game options. His opponent was also playing a base red-green deck.

Both players had mulliganed and both had gotten off to slow starts. My friend's first play of the game was a Wildheart Invoker that looked as though it was going to be awfully menacing if he put a Boar Umbra on it the next turn. His opponent's first play of the game was an Ondu Giant that fetched an Island to go with his two Forests and two Mountains. 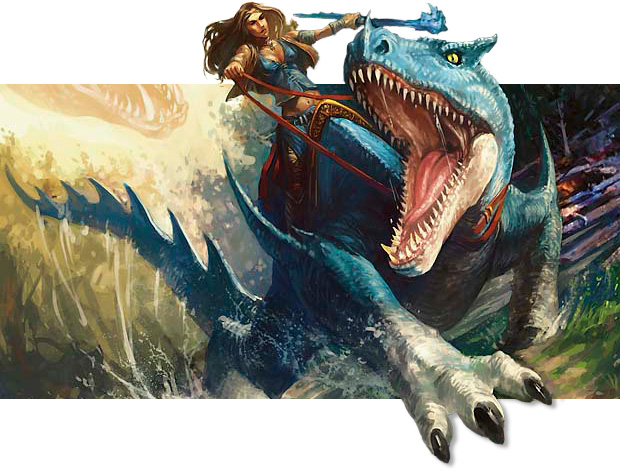 My friend untapped, looked at the Ulamog's Crusher and the Akoum Boulderfoot in his hand, thumbed the Boar Umbra for a second before deciding to attack and then cast an extremely underwhelming Lagac Lizard after combat.

The next couple of turns saw the two players playing creatures back and forth. By the time my friend did get around to playing the Boar Umbra, it was okay but it didn't have much of an impact against his opponent's Eldrazi giants, Pelakka Wurms, and whatnot.

I asked my friend why he didn't play the Boar Umbra on his Wildheart Invoker on his fifth turn? His opponent was tapped out after all, so there was very little that he could do.

My friend answered that he did not want to play the Boar Umbra because his opponent had fetched an Island. He was afraid that a Narcolepsy or a Regress would set him way back.

There are a few things that we need to consider before we can actually weigh the quality of my friend's play decision.

Could Have vs. Likely to Have

But the majority of your mental energy should instead go towards asking yourself what your opponent is likely to have. 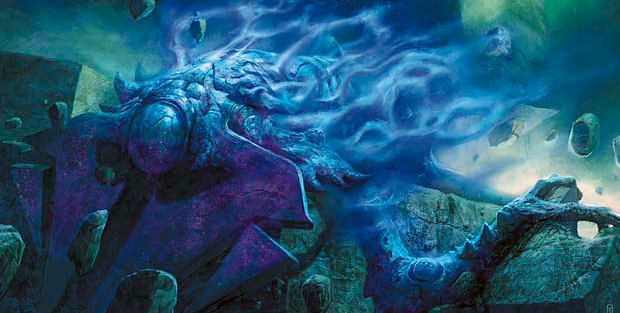 While it is true that a Narcolepsy would be pretty rough in this spot, as his opponent would likely be able to play it as well as another four drop immediately upon untapping, a Regress wouldn't actually be too bad for you. My friend's opponent had already demonstrated that he did not have any two or three mana creatures on his first few turns because he didn't play anything. Outside of an Aura of his own, like a Boar Umbra or a Snake Umbra, the opponent would have very few plays to make unless he happened to draw a two or three casting cost creature over the last two turns.

While Regress wouldn't have been all that bad for my friend in this spot, it is unfortunately true that it would be much more likely that his opponent had the Narcolepsy.

You might be asking why would it be more likely that my friend's opponent had a Narcolepsy than a Regress. The reason for this is that Narcolepsy is a much stronger card than Regress. To understand this better simply imagine what you would do. If you had a red-green deck, would you be willing to splash a Regress?

Maybe you would, but you probably wouldn't in most decks, unless you were already splashing blue ...

Narcolepsy on the other hand is a top notch removal spell that is well worth a splash, especially in decks that already have some mana fixing (like Ondu Giant).

In fact, Narcolepsy is the most splashable blue common in the set. Drake Umbra is similarly splashable, but it's an uncommon. After that you have a number of cards that are fairly splashable, but won't always be worth dipping into another color for.

Maybe if you were already splashing blue for Narcolepsy or Drake Umbra, you might find room for a Regress. But even if you were already dipping into blue a bit, the three casting cost Boomerang might not end up making the cut, especially if you are trying to get away with only 2-3 blue sources.

While it is true that it is more likely that my friend's opponent would have the Narcolepsy than the Regress, it is not a given, or even statistically likely, that he would have either in his hand.

Even if we assume that we are facing a player who has a Narcolepsy in his or her deck, that Narcolepsy is only one card out of 40.

The fact that my friend's opponent fetched an Island with his Ondu Giant does not in any way indicate that he has the Narcolepsy in his hand. Because he already had two Forests and two Mountains, he would be incentivized to get the Island even if he didn't have any blue spells in his hand, simply because he would then be able to cast his splashed blue spells when he draws them. 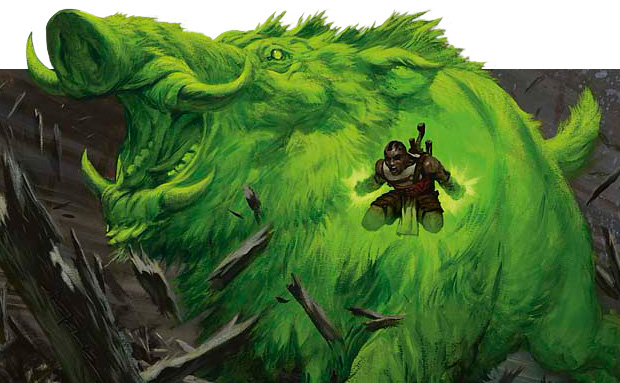 The problem is, if you are going to play that scared with your Auras, then there's pretty much no point in having them in your deck. While Boar Umbra is still good late in the game, if you are consistently waiting until you get very deep into the game to cast it, then it might as well cost six mana.

My friend gave up a lot of time against his opponent's deck that was simply trying to buy time in order to get to the late game. My friend did eventually win this game, but only because his opponent made some key mistakes on the final turns. Had he simply played the Boar Umbra on turn five, instead of the barely relevant Lagac Lizard (his opponent already had a 2/4 to block it with, so it wasn't helping him on offense at all), then he would have put his opponent under a ton of pressure to deal with it.

Had his opponent been playing a base blue deck, then it might have made some sense to wait on the Boar Umbra, especially if he had already seen multiple copies of Regress and Narcolepsy.

But as it was, his opponent was unlikely to have more than one, or at the most two answers to the Boar Umbra in his red-green-blue deck. And if you aren't playing a card that could win you the game outright because you are afraid that your opponent has one or two answers in his or her deck, then you are playing waaaaay too scared for your own good.

Sure you want to play cautiously sometimes, but you can't play around everything, or wait around for the perfect situation.

When you have the opportunity to put your opponent into a really tough situation at little cost to yourself, then you should generally take that opportunity.

Even If My Opponent Does Have It

Sometimes, when you are trying to play around a card, you accomplish nothing other than to make it much better. Even if my friend's opponent did have the Narcolepsy and another creature, my friend would be able to cast an Akoum Boulderfoot on the following turn, and his opponent would not have the Narcolepsy when he played his Ulamog's Crusher a couple of turns later.

Not only that, but my friend would have an active Wildheart Invoker that, along with Ulamog's Crusher, would put his opponent on the fast lane to his sideboard.

My friend's opponent would have needed to have a Narcolepsy, and a series of very intimidating plays to actually punish my friend for playing the Boar Umbra. But the fact is, pretty much any set of powerful plays plus Narcolepsy would have put my friend into a tough spot.

When You Should Play It Safe With Your Auras

If my friend had been under a lot of pressure because his opponent had curved out nicely, then he probably would have been better off casting his 3/3 Lagac Lizard to protect himself from the incoming onslaught. But as it was, there was little reason for my friend to save his Boar Umbra.

If you need to slow down your opponent's offense, it is probably a good time to wait on casting your Auras. If your opponent has a bunch of mana available and you get the feeling that he or she probably has a good answer, then you should wait on casting your Aura. If you are worried that your opponent will get way ahead quickly if he or she has an answer, then you have a lot of similarly relevant plays that are less risky and you should wait.

But if you aren't afraid of getting blown out if your opponent has an answer, you don't think it's too likely that your opponent will have an answer (and/or your opponent's answer will likely remain just as relevant if you wait), and you don't have any plays that will provide you with a similar impact on the board, then you should probably just go ahead and cast your Aura.

It often pays to play cautiously, but it pretty much never pays to play scared. If you don't put your opponent under constant pressure throughout the game, then you will give him or her the time to draw and use all of his or her best cards. If you have a good long game plan, and you think you can handle that, then go ahead and play cautiously and do everything you can to get the most out of your cards.

But often times, even if you are trying to win in the late game, you will need to put enough pressure on your opponent so that he or she will use his or her cards to less than optimal effect. If you can get your opponent to use his or her best cards, while you wait patiently on some of your most powerful options, then you will be able to win your fair share of long games with ease. 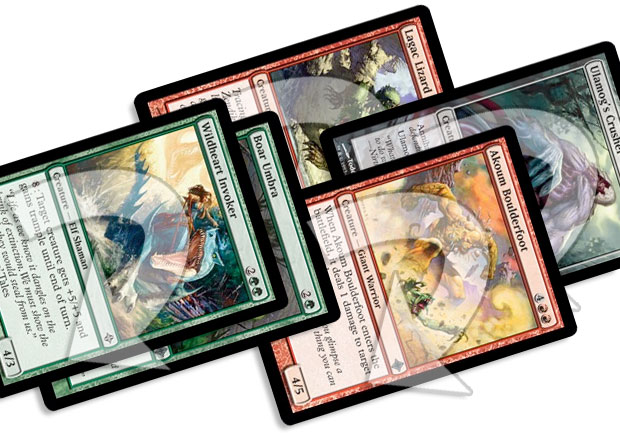 And if your opponent doesn't have that right answer to deal with your powerful threat, you will often win before the game goes long enough for you to win through your cautious and sparing use of your most powerful threats and answers.