Posted in Limited Information on December 7, 2010

hen you are playing in the Top 8 of a Pro Tour Qualifier, it is do or die time. A second place finish at a PTQ is still a very strong showing and should instill you with a lot of confidence and a sense of accomplishment (especially given how big today's PTQs are). But when you sit down for your Top 8 draft, you need to go for the gold, not the silver. A second place finish will be rewarded with a set of steak knives and a year-long supply of Rice-A-Roni (or in some, exceedingly rare cases, a bunch of booster packs), whereas a first place finish will be rewarded with a free flight to Paris during Valentine's Day weekend and an invitation to play in the first Pro Tour of the 2011 season—where the best players in the world will be able to compete for tens of thousands of dollars in prizes. 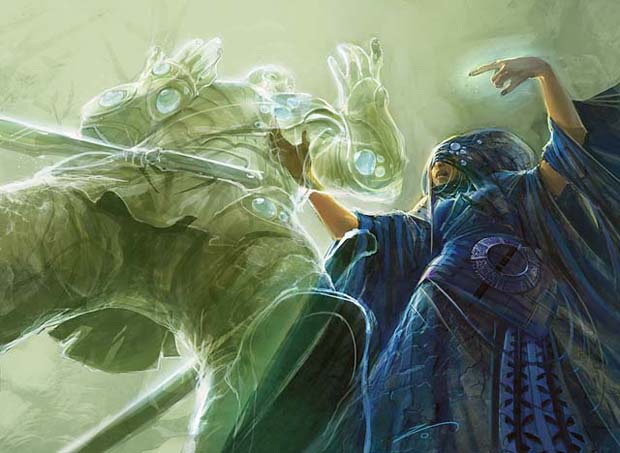 So the fact of the matter is, if you are in the Top 8 of a PTQ you need to try to draft in such a way as to maximize your chances of winning the entire tournament. But what does that actually mean?

One interpretation of this is that you should be willing to take some extreme risks as you need to have the best deck at the table in order to have a good shot of winning your draft.

This type of thinking leads players to force infect from pick one, even if the packs don't lend themselves to the strategy.

Is this a bad way to approach the problem?

Not at all—particularly if you think that your forcefulness will be able to influence the draft. But it isn't the only way to tackle the challenge at hand.

However, I like to draft decks that give an opportunity to interact with my opponents when I sit down to play against them. If I have to give up the chance at a little bit of extra power in exchange for a greater likelihood of ending up with a competitive and highly interactive deck, then I will give up that chance at extra power pretty much every time.

This means that I want a deck with a good amount of tricks and removal spells. I want to give myself and my opponent a lot of choices while we're playing, and I want to minimize the opportunities that my opponents will have to blow me out with either quick draws or unanswered bombs.

If I have a deck that can consistently offer me the cards I need to have competitive games against my opponents, then I know that if I play exceptionally well that I will have a very good chance of winning the event.

And if I'm not playing particularly well, then I probably wasn't going to win the PTQ even if I did end up drafting something slightly more powerful.

When I sit down for a Scars of Mirrodin draft, I am looking to: take a bomb, a piece of removal, an artifact or a creature with infect.

While I would prefer not to start my draft with an infect creature, I don't really have much of a preference between the other options and will simply go for whatever the strongest card in the pack is, weighting heavily for flexibility.

Around my third or fourth pick, I will generally be willing to make a decision on the direction that will heavily influence the direction of the rest of my draft based on what I've gotten passed. If I get a fourth-pick Plague Stinger, then I'm going to see if I can draft infect. If I get a Turn to Slag third in an otherwise weak pack, then I'm going to be looking for more red cards. If I pick up a Glint Hawk fifth or sixth, and I already have some artifacts, then I will see where that takes me.

By the time I'm six or eight picks into the first pack, then I probably have a pretty clear idea whether I'm drafting a themeless good stuff deck, an artifact deck, or an infect deck.

By remaining flexible, I pretty much always have a very competitive deck that I can go 3-0 with.

But let's say that you want to draft something great at any costs. You are willing to throw all caution to the wind in an effort to end up with the best deck at the table.

A common reaction is to simply force infect and call it a night. After all, it's the most powerful archetype. If you get the right cards, you will probably end up with the best deck at the table. If you don't get the right cards, your deck can end up being pretty bad—but if all that matters to you is actually winning the draft, then who cares about nightmare scenarios.

But if you want to hedge your bets a bit, or you think that infect is likely to be overdrafted, you could instead attempt to muscle your way into a strategy, such as aggressive white metalcraft, assuming that others will either go for infect, or be somewhat reactive in their drafting strategies and you will then be able to reap the rewards for your decisiveness.

How it's Played Out

If you're looking to qualify for Paris, then you should definitely take a look at the Top 8 deck lists from this season's Pro Tour Qualifiers to see what people have been drafting when an invitation is on the line.

During the first batch of PTQs this season, you can see that there were a lot of wins for infect decks and aggressive white-red decks. But, surprisingly, blue decks have won quite a few PTQs!

Players can always attempt to muscle their ways to victory, and if they happen to be in the right place at the right time than they will reap great rewards for their bold choices. However, right now it seems as though it is a better strategy to remain open until you get a clear signal to move into an archetype.

... Or you could simply draft an archetype that nobody else is interested in touching.

And Darwin Goh was able to battle his way to the top at a recent 294 player PTQ in Edison, NJ with the following blue-black deck.

Blue is seriously under-drafted right now, so players willing to take the dive and grab those late Sky-Eel Schools, Vedalken Certarches, Darkslick Drakes and Volition Reins are being rewarded with some pretty excellent decks and quite a few wins. 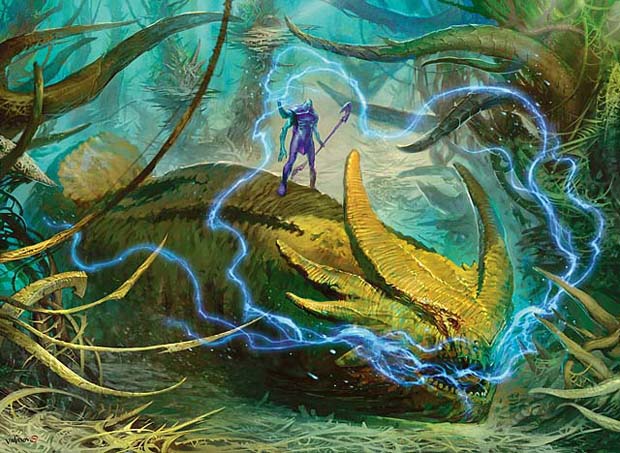 I can't remember any Draft format where a card as powerful as Volition Reins would frequently remain undrafted until 5th or 6th pick, even in the first pack!

Out of the six reported PTQs from November 20th-27th, four of them were won by blue decks and the other two were won by infect decks.

So, the next time that you sit down for a single elimination Scars of Mirrodin Draft, you should look to go for a strategy that's routinely under-drafted.

The results have shown that players have been tearing up the PTQs recently by drafting blue; and at Grand Prix–Nashville, Ari Lax was able to make it all the way to the finals by exclusively drafting off-theme green decks that revolved around fatties like Molder Beast and Alpha Tyrannax ... only to lose to Gerry Thompson's blue deck in the finals.

The World Championships are this weekend and I'm pretty excited. While I won't be at the event this year, I am going to be checking the coverage pretty frantically from home in order to see Standard, Scars of Mirrodin Booster Draft and a brand new Extended format being played on the biggest stage.

It's important to note that the draft portion of Worlds will feature somewhat different dynamics from what we see at Pro Tour Qualifiers.

But for a player drafting on Day 2 of the World Championships, a 50-50 shot at either a 0-3 or a 3-0 performance might not be a good proposition—especially if that player thinks that he or she has a good handle on the Draft format.

Sure if the player's back was against the wall and he or she needed that 3-0 to stay in contention for a meaningful finish (be it a Top 50 to lock up an invite for Pro Tour–Paris, or a Top 24 to level up in the Players Club), then those risky draft picks might make some more sense. Otherwise players are typically going to make draft picks that allow them to hedge a bit in an effort to minimize the chances of a nightmare scenario.

Will bold players be rewarded for bullying their way into infect? Or will they be forced to have a taste of their own medicine when lots of other top players attempt to pursue the same strategy—thus poisoning themselves in the process.

Will Rusted Relic and Chrome Steed powered metalcraft decks rise to the top? Or will some well-timed Shatters make the machines worthless.

Will the dinosaurs (Alpha Tyrranax and Molder Beast) finally rule the earth? Or will they again find themselves teetering on the brink of extinction.

Or will blue, the color that has been rumored to have died so many times in Magic's history, continue its reign?

Follow the action live from Japan to find out how this story unfolds!

Posted in Limited Information on December 7, 2010