Posted in Limited Information on April 21, 2009

ow to build Sealed decks is a topic that receives a lot of attention, but how to build draft decks is a question that is sadly underexplored.

Often times we'll sit down to build our deck and we'll find that we have about 21 cards that we definitely want to play, and about 4 cards that we wouldn't mind playing. So we spend some time shuffling the cards around before we decide that we need to get our curve a little bit lower, so we run the two-mana 2/2, or we need a little bit more oomph, so we run the seven-mana 6/6, or we think that conditional Counterspell will come in handy, or ....

Other times we'll sit down and find something in the area of 27 really good cards staring back at us. There are a couple of dramatically different ways that our deck could go, and there really aren't that many cards that we are definitely going to play.

So what happens when you have an overabundance of good cards to build your deck from?

Last week we took a look at this already drafted deck and figured out how we would build it.

Some of these cards we don't need to spend time arguing for:

Then there is a similarly small handful of cards that we know we're going to run:

But after that I could see a legitimate argument for running or not running any of the other cards in the pool.

Before I get into my individual choices, this is the deck that I wound up building.

When you have a pool this good your questions should generally revolve around mana concerns, plans for victory, or shoring up early game problems.

Since this deck doesn't have any problems winning, my decisions were based on mana and early game concerns (conveniently, we have the right cards to solve both of those problems at the same time).

It needs generic mana, and it needs specific mana. Because of this, 17 lands, 2 Obelisk of Esper, and 2 Etherium Sculptor are a must for me. 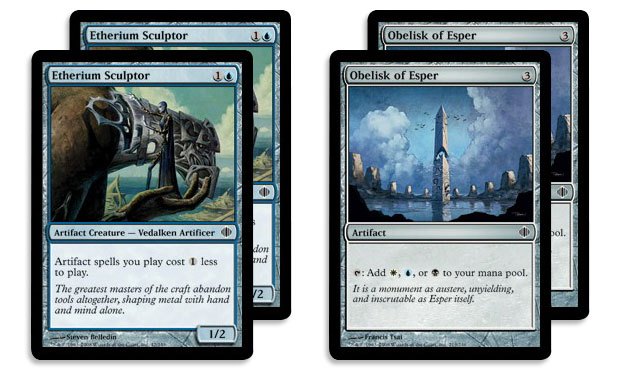 When you have a lot of card drawing, and reusable effects (such as Sanctum Gargoyles) then you can afford to (and often need to) run a lot of mana. In decks without card drawing or reusable effects, you can afford to run less mana in favor of additional cheap spells. If it takes you a little bit longer to draw your mana to cast your big spells, that's OK because you're still casting spells in the mean time. 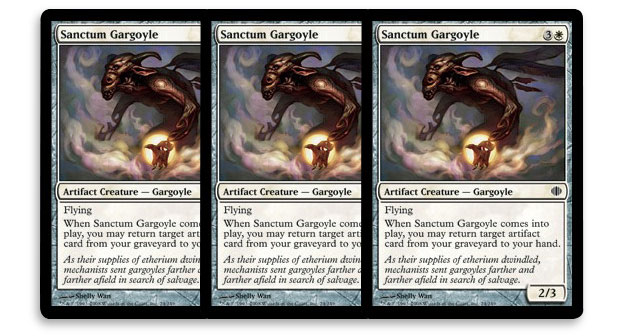 Some Books Aren't Worth Reading

There are times when an unchecked Scepter of Insight will allow you to dominate the game. When the game stalls out, and you have plenty of extra mana, Scepter of Insight is exactly the type of card you want. But that doesn't change the fact that you have to pay a total of seven mana just to get your card back, eleven mana to be up a card, and fifteen mana to finally be up an exciting two cards.

This deck already has plenty of things to do with its mana, including recurring Courier's Capsules with Sanctum Gargoyles. If anything, we need to worry about cards to get us to the late game.

The last thing we need here is a gigantic mana sink.

Don't get me wrong, there are occasionally decks, most notably decks with a lot of cheap removal spells, where Scepter of Insight can act as an absolute game breaker. But those decks are few and far between.

When I first looked at the deck I had Resounding Wave main and Unsummon in the board. But after I saw how the deck functioned, I realized that I wasn't that concerned about what it could do late.

Instead, I saw a number of situations where I was doing lots of cool things with my Sanctum Gargoyles, my Sludge Striders, etc., but I had to take a ton of time off to bounce something with my Resounding Wave. This deck can really take advantage of its mana, and running cards like Unsummon allows it to better do what it wants to do.

So how good is Cumber Stone?

I don't think that there is a card in Conflux whose worth is disputed more than Cumber Stone. I've heard Cumber Stone described as both "insane" and "unplayable" by players who I have a great amount of respect for.

Personally, I think that Cumber Stone is pretty darn good. Not insane, but pretty good. I'll generally take it around fifth or sixth pick, and it ends up making the cut in almost all of my decks.

Cumber Stone is especially good in a deck like this where we are concerned with getting overwhelmed by creatures.

As for the Vectis Agents, that was a little bit harder to cut. I really wanted to run the Vectis Agents, but the only card that I could really cut for it was Windwright Mage, and that just wasn't worth it as I already have two Tidehollow Strixes and a Fatestitcher to shut down otherwise scary attacking creatures.

The First Sideboard Cards I Look At

When I reach to my sideboard with this deck I could easily decide to bring in my Cancel, my Vectis Agents, my Resounding Wave(s), or, most commonly, my Vedalken Outlander.

Now, I know I was singing Cumber Stone's praises just a moment ago, but there are a number of matchups where Cumber Stone is only mediocre. If you're playing against a deck that has creatures that are still going to be quite big even if you have Cumber Stone, then it probably isn't doing much for you (I'm looking at you, exalted and five-color decks).

And yet, if I'm playing a slow, grinding control matchup, I might begrudgingly take out an Etherium Sculptor to make room for some more endgame cards.

Why the Deck Looks the Way it Does

I built this deck under the assumption that I needed to run 21 mana sources (17 lands, 2 Etherium Sculptor, 2 Obelisk of Esper). Once I've made that decision a lot of things fall into place.

If I hadn't built my deck around the assumption that I was going to play 21 mana sources I would have had a very different set of decisions to make, and I could easily have wound up playing the Vedalken Outlanders and the Vectis Agents.

The assumptions that you make before you actually pull the trigger and make those final decisions can have a huge effect on how things turn out. If you're thinking about a question in the wrong way, the answers you deduce might be, well, wrong. 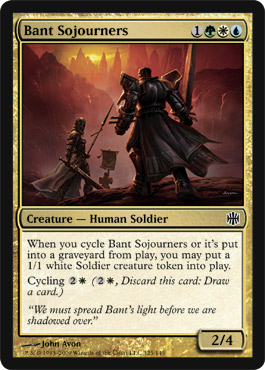 Bant Sojourners is a part of a cycle of Sojourners. I haven't gotten the chance to see the other Sojourners yet, but I imagine that they all have effects that will make them feel right at home in their respective Shards.

Bant Sojourners particularly feels right at home in a Bant Exalted deck. If you hard cast it, it has a lot of toughness, something that exalted decks are often hurting for. And if it dies, it leaves behind a 1/1 token creature that an exalted deck can make particularly good use of. Either by attacking alone with it and pumping it up to a scary size, or to use it as a chump-blocker while you attack alone with an evasion creature that is slicing away at your opponent's life total.

But Bant Sojourners doesn't just belong in Bant decks. Far from it. Being able to make a creature at instant speed is very valuable. If you're in a spot where you need to leave mana up for a trick or a counterspell, and the situation doesn't arise where you would want to use that trick, then your mana won't have gone to waste as you'll be able to cycle and make a Soldier.

Bant Sojourners is probably at its best in five-color decks that have a good amount of removal. That way you'll be able to take advantage of all of its strong points.

Have Fun at the Prerelease

If you're at the NYC Gray Matter Prereleas,e I'll be gunslinging, so please stop by, say hi, and challenge me to a game.

But no matter where you're Prereleasing, I hope you have a really good time exploring the new set.

I know I will.

Posted in Limited Information on April 21, 2009