First Step into the Maze

t's almost time for us to take our first eager strides into Dragon's Maze. The gates are open and the colored mana symbols are flying around everywhere in this crazy new environment. New combinations of colors, unleashed freedom from single guilds, and endless possibilities await us. The Draft format promises to be exciting, as all three sets are included in the Draft portion.

But we are getting a bit ahead of ourselves here. Today, we are going to cover some of the changes to expect with the new set. I'll also be giving some advice about the Prerelease. 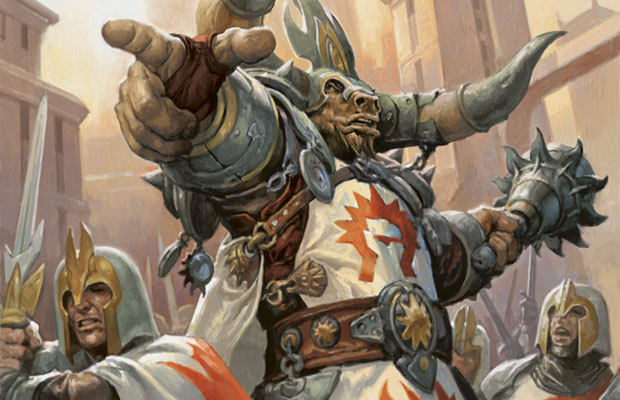 A true multicolored set can be intimidating. When you show up at the Dragon's Maze Prerelease this weekend, you are going to face down a pile of mana symbols like you have never seen before. Greed will tempt you, power level will pull you, and consistency very well may be thrown out the window. We are being rewarded for playing three-color decks, so many will follow that path.

Or, you might just build a sweet five-color deck.

Either way, Dragon's Maze is going to be a drastically different Limited experience from what we have grown used to in the last six months or so. Freed from the shackles of our two-color guilds, we are now left to find that delicate balance between power and consistency.

The scale we are using to weigh this balance has grown considerably, too. Not only are there more color combinations available to us, but we also have more cards at our disposal. This means more mana fixing, more bombs, more aggressive creatures, and more removal. And more gold cards, too.

Let's take a look at a new cycle of mana fixing: the Cluestones. 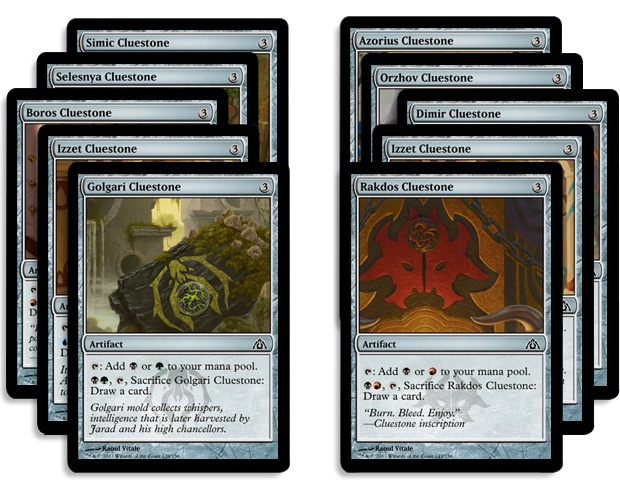 
We are talking full cycle here too, folks. All ten guilds get their own nifty Cluestones to power out big threats and get a little value later in the game. The Cluestones are similar to their friends, the Keyrunes. They all cost three mana and can make the jump to five-drops a turn sooner than normal. Instead of turning into creatures, these allow you to sacrifice them to draw a card later in the game, though.

A big difference is that the Cluestones are all commons, where the Keyrunes are uncommons. This means that mana fixing is less of a premium, but you have to know what you want and when you want it. In Draft, they will only be available in the opening pack. In Sealed Deck, they will show up more frequently than their uncommon counterparts.

If the format is slow enough that Cluestones are playable, game-ending six- and even seven-drops will be far more playable in full block than they were in Return to Ravnica or Gatecrash. You will have to reevaluate the five-drop and higher cards from these sets to see if they look more appealing. What was too slow before may be just right now.

If the Prerelease is any indication, three colors looks like the norm going forward. I couldn't be happier about this. I have found three-color decks to be the most interesting and enjoyable arrangement for Limited. Sure, sometimes you dip down to a rowdy two-color build or spread your wings a bit and go for the full five-color monstrosity. Either way, three colors is a sweet place to be. You get the benefits of a guild with the gap-filling goodness of that key third color.

Building mana bases for three-color decks can be problematic, however. It can be confusing when you have a relatively even split of three different colors, along with a bunch of mana-fixing options available. How many Cluestones and Keyrunes do we run? What about Guildgates?

In a typical format, a splash is going to be one or two high-impact cards in a third color. In this format, it will probably be more like four or five cards that have medium-to-high impact and are not usually cast until turn three at the earliest, but usually later.

This is an important point: our splash colors should ideally come on cards we intend to cast later in the game. This gives our mana base enough time to set up. Having a realistic expectation for when your spells will be resolved goes a long way to building a solid deck.

Realize, though, that this doesn't refer to low-cost cards, necessarily; it just means a card that will likely be resolved later in the game. Take Ground Assault as an example:

Even though it's a two-drop, it's usually cast later in the game than turn two, as it can be used to take out opposing bombs when needed. If it takes us until turn five or six to find our splashed mana color, that's ok.

Beware of the inverse, as it can really bite you. Wojek Halberdiers is a nice, aggressive, two-drop:

It makes for a lousy splash, however. Wojek Halberdiers is a creature ideally suited for turn two. A turn-three Halberdierss is acceptable, but on turn five it is less than impressive. Again, we have to give our mana base some room to breathe before we can expect to cast every card in our deck.

Throughout the Return to Ravnica block, I have often been asked which guild to choose at the Prerelease. I decided to avoid the question on the podcast as it was a one-time thing, and the set review shows are used as a reference even after the set is out. I have some simple advice about which guild to choose at the Dragon's Maze Prerelease this time:

I know, I know, it sounds a little corny coming from a Nuts and Bolts Spike. But I think that we have had enough time with these guilds now that we should have a good idea about what our favorite strategy was in the previous two sets.

Like to beat down? Boros or Rakdos are great choices. Enjoy curving out and attacking with big creatures? Simic or Selesnya will do just fine. If you want to get a little fancy, perhaps Izzet or Dimir will suit you.

You see where I am going here. Choose the guild you enjoyed playing the most and I think the doors to three-color success will be open. There is a lot we don't know—and won't know—at the time of the Prerelease, so sticking to the things we do know will be advantageous.

Remember that while you will be getting four packs of Dragon's Maze along with a guild pack of your chosen guild (plus another that shares a color with it), you will not be automatically receiving an on-guild bomb rare this time around. This should change the experience a bit; we won't have the big bombs to lean on during deck building. (We will still get an on-guild rare from each of the guild packs, though.) 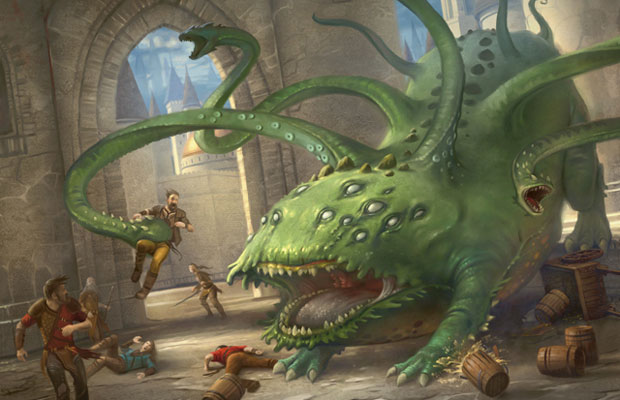 The power level will likely be made up for by the fact that we have access to a lot more color fixing than before. This not only allows three-color decks, but also enables us to go even deeper, to the realm of four- and five-color builds. This isn't for the faint of heart, but it may prove to be the most powerful option.

I'm planning on sticking with three colors as I described above. The problem with five-color decks is that they often require so many spell slots dedicated to fixing that you simply don't do enough in the game. If you cast three Cluestones and your opponent casts three creatures, your opponent is going to beat you most of the time.

Remember that this is Sealed Deck, so it's usually slower than Draft. Additionally, this is multicolored Sealed Deck, so it's likely going to be slower than Return to Ravnica or Gatecrash was. This means you can often play a few more mana-fixing spells, especially ones that ramp your mana, like Keyrunes or Cluestones. And it also means you can play some of the higher-casting-cost cards in your pool.

Try out a six- or seven-drop creature and see if it has the punch you need to power past your opponents.

I expect a lot of malformed mana bases at the Prerelease. My plan of keeping it relatively simple with just three colors allows me to actually resolve spells while my opponent struggles to set up his or her mana. The power level of a solid three-color deck will be sufficiently strong to win matches.

The best part of the whole thing?

I have no idea what I'll end up with, and I love that.

Have fun at the Prerelease!