Posted in Limited Information on December 16, 2008

n last week's bonus exercise, you're playing in a 32-person single elimination Grand Prix Trial. In order to walk away with the byes you need to go 5-0—suffer a single loss and your tournament is over. You open the following Sealed pool:

How do you build this pool so you have the best chance of going 5-0 and walking away with 3 greatly coveted byes?

Part of the answer is to just build the best deck possible, but there's a little bit more going on than that ....

You see, different tournaments ask you to do slightly different things with your Limited deck. So what does that mean for a 32-person single elimination Grand Prix Trial?

Well, like any other tournament you sign up for, you want to be the last person standing when the dust settles. However, unlike many other tournaments, you don't have any losses to give. Because of that, you should build your deck with the 5th and final match in mind. Yes, you might lose before you get there, but if your deck isn't as prepared as it possibly can be to take down the other 4-0, then your priorities are way off.

Because you are going to be 4-0 (or you're going to be out of the tournament), you should expect to face some combination of speed, bombs, consistency and removal. Not that it's available with this pool, but that means that the token / devour build which is awesome against decks that are slow or lacking in removal just isn't worth playing.

So let's figure out what we're going to do with the pool.

The next thing I noticed is that this pool has very good mana fixing that's spread across all five colors. Between two Esper Panoramas, a Jungle Shrine, a Savage Lands, an Obelisk of Naya, and an Obelisk of Grixis, we're going to be able to play pretty much anything we want (except maybe Titanic Ultimatum). 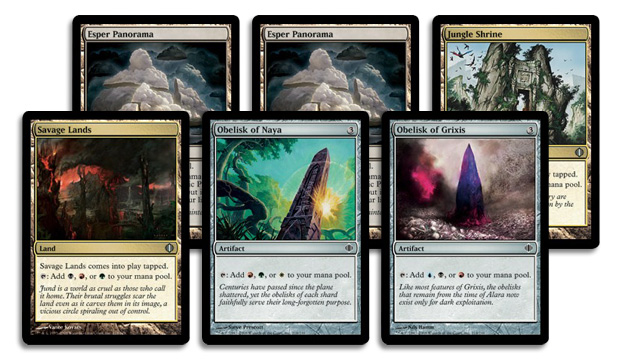 The trimming approach for building Sealed decks that I usually like to use just wasn't doing it for this deck. It's pretty clear from looking at it that the deck is going to need to play three or more colors and can easily run five if it comes to it.

After looking at what was left for a little bit, I became pretty confident that I wanted to play green and white as my base colors, and then splash a number of top cards off of my mana-fixing.

With that in mind I decided to take a look at what cards I would almost definitely want in a five-color base green-white deck:

And these are the cards that I might want:

So there are 17 spells that I probably want, and another 22 that I might want. That's a lot of cards fighting for, at most, 6 slots.

As much as I'd like to fit Titanic Ultimatum into a configuration of the deck, I just don't think it's worth doing. I might sideboard in the Ultimatum if I feel I'm in for a slow match, but I don't think that this deck can support both Tower Gargoyle and Titanic Ultimatum. Yes, a deck needs a lot of oomph to beat another 4-0 deck, but it's also very important to be able to play your spells in a timely manner.

As players pointed out in the forums, this is not a spectacular Sealed pool. You still need to do what it takes to give yourself the best chance of winning. Given the fact that I was not going to main-deck Titanic Ultimatum in mind, I decided that I would have the best chance of going 5-0 with an aggressive version of the deck. I would also be prepared to sideboard into a more controlling version against decks that were well suited to beat the faster version that I was starting with.

So that meant it was time to put in the two Sigil Blessings and the Cylian Elf. Once I added the pump spells and the 2/2, it struck me that the best cards to round out the deck would be the two Waveskimmer Avens and the Obelisk of Grixis (admittedly, Obelisk of Grixis was probably a must-include in this pool, but I wanted to make absolutely sure it was necessary before I added it.)

Quietus Spike was a really hard cut to make, but it just didn't seem like quite the right card for this deck. If I were to run it, I would have to cut a creature (which would make Quietus Spike much worse) or a Sigil Blessing, which is very important in the aggressive version of the deck that I chose to play.

For the record, this deck was constructed from a real pool that Tsai Miller played to a 5-0 record at a last-chance trial for GP–Taipei:

Tsai chose to go for a more controlling build, which is completely respectable. While I don't believe that a controlling build gives me the best chance of winning this type of tournament, I probably would have gone with something similar to Tsai's build if I were playing in a 32 person tournament that cut to Top 8, where I would only need to go 3-1-1 to advance to the single elimination finals. If you only need to go 3-1-1, then you can afford to give up a little bit Game 1 against the best decks in order to get a bit more against the average-good decks.

The one thing that I have a strong issue with here is that he chose to run Cloudheath Drake over Waveskimmer Aven. I've talked about this before, but if you can take a simple step to minimize the effectiveness of Branching Bolt then you should definitely do so.

In last week's forums there was a very interesting discussion about statistics and figuring out what type of deck will give you the best odds for a given tournament. A lot of interesting points were touched on, but there was one point that really stuck out at me like a sore thumb.

Clearly if you're playing in a single elimination tournament then you should go with the deck that has the chance to go 5-0, because the 4-1 deck will almost never go undefeated ....

Only one problem: There is no such thing as a deck that will go 4-1 nearly every time but will rarely go 5-0.

There are excellent decks that have a high chance of going 4-1 or 5-0. There are extremely volatile decks, that will either be awesome if they draw their mana or terrible if they don't, that can just as easily win 5 matches or 2. There are decks, such as the one that I constructed, that are designed to give themselves the best chance to beat excellent decks. And there are decks that are designed to beat up on average-good decks, that will have a lot of trouble against top-notch concoctions.

But there is simply no such thing as a deck that will consistently go 4-1 but will rarely go 3-2 or 5-0. 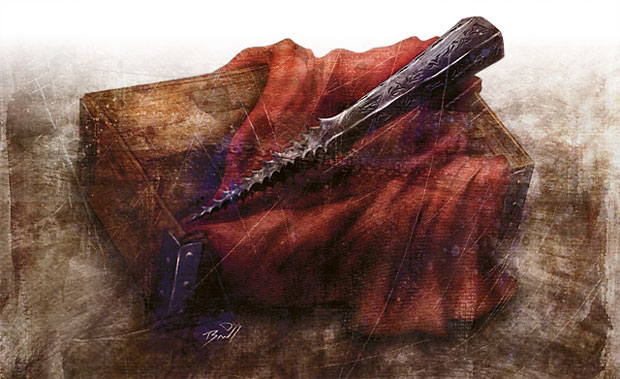 This piece of equipment can win games almost single-handedly. It can turn tokens into monstrous beasts, it can turn pingers like Blood Cultist into Avatar of Woe. It can also be a gigantic waste of mana that leaves you particularly vulnerable to removal and never helps get you anywhere.

So how do you evaluate a card that has such varying effects on the game, especially if it's a rare that you don't get to play with or against very often?

Well, it's a little bit tricky, but you're going to have to rely on theory and your instincts a lot more than you would if you were evaluating a common that gets played all the time.

If you're playing a quick deck with a bunch of small creatures and not many expensive spells, then Quietus Spike could be one of your most important cards. But if you're playing a slow deck, then you probably won't want to even play this piece of Equipment that costs a total of six mana to get its first effect.

Quietus Spike is often a fine card, but I'm not going to use an early draft pick on it, and there are definitely decks where I'll leave it in my sideboard. If it's pack 1 of a draft I generally wouldn't want to take it before around 7th or 8th pick. If it's pack 2 or pack 3, I should know how good Quietus Spike will be in my deck and I'll be able to move it up or down in value accordingly.

Heads Up, Packs Down 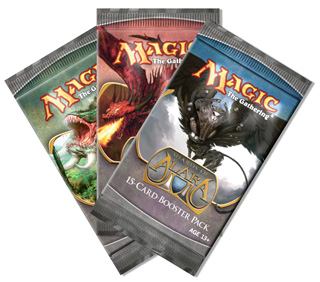 Before I go on break, I want to share a fun, interesting format with you: Heads-Up Single Pack Draft. I learned about the format when Tom Martell and I were on a flight back from a Grand Prix and we were looking for something to do to pass the time. I wanted to do a one-on-one draft, but we only had three packs between us.

Turns out that wasn't a problem.

In single-pack draft, each player must play every card they draft as well as 10 basic lands of their choosing. There is no "decking"—if a player has no cards left in their library when they would draw, that players shuffles their graveyard back into their library and draws from their now replenished library. If a player has no cards in their library / graveyard when they would draw, they don't draw, but they don't lose the game because of their inability to draw either.

With this rule in mind I first-picked Magma Spray assuming that I would be able to win every long game by removing all of Tom's creatures from the game.

Unfortunately for me, Tom had played the format before, so he knew how to craft an actually awesome endgame. His endgame consisted of the nearly unbeatable combination of Where the Ancients Tread, Call to Heel, and multiple 5-power creatures.

I had drafted a faster deck than Tom, so I could still steal a few games, but the matchup was painfully in his favor thanks to his nearly undefeatable endgame.

The format forces you to think in a very different way then you normally do. Because there are only two players in the draft, you know every card in your opponent's deck after their first pick. That means that both you and your opponent are going to be actively metagaming against one another at every step of the way.

I'd recommend giving the format a try if you're looking for something to do before your draft starts or in-between rounds of a tournament. It's a pretty excellent way to spend 20 minutes (or an hour).

Sorry, no bonus exercise this week. Limited Information and the rest of the magicthegathering.com crew are going to be rerunning some of the best articles of 2008 for the next two weeks. When I get back, you can expect some exciting new things for the column, including the return of the draft walkthrough.

Posted in Limited Information on December 16, 2008