o you sit down for a Shards / Conflux / Alara Reborn draft. You open up your first pack and it contains: 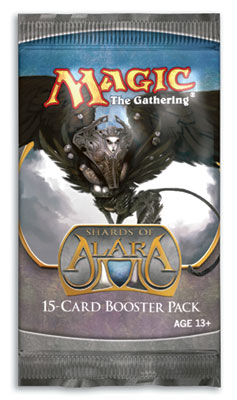 Well, first off let's take a look at what we definitely won't be taking.

If you haven't played the format very much, Archdemon of Unx might look really good to you. And there certainly are situations where it's an absolute standout. But in practice, Archdemon of Unx falls short. Even with domain, Jund Panorama is noticeably weaker than the tri-lands.

I also wouldn't spend much time thinking about Bloodpyre Elemental or Viscera Dragger. Bloodpyre Elemental and Viscera Dragger have gotten weaker with the release of Alara Reborn. The difference between now and before is that there is a higher density of cheap, menacing creatures then there used to be. So while they are both still good, they give you less bang for your buck than they used to. 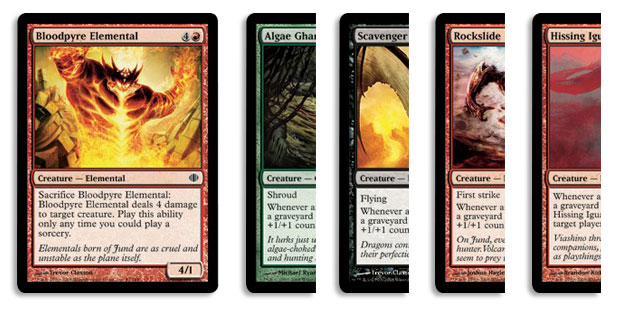 So the pick is now between Tidehollow Strix, Wild Nacatl, Akrasan Squire, Savage Lands and Arcane Sanctum. The creatures are all reasonably close in value. In the absence of the tri-lands I would take the Wild Nacatl, but I could also support arguments for either of the other two picks based on personal preference. However, none of these creatures can really stand up to a tri-land first-pick, first-pack.

I've noticed a surprising number of people mentioning that they do not want to take tri-lands or other kinds of mana fixing early because they don't know what colors they are in yet. While I can understand the thought process that might lead someone to think this, it's just wrong.

Of course you don't know what colors you are in yet; it's your first pick. And unless your first pick is a Sigil of Distinction, there's no guarantee that you will play it. 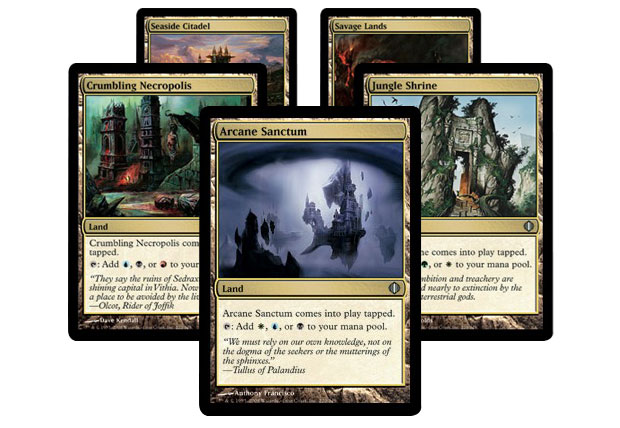 If you take an Arcane Sanctum or a Savage Lands, on the other hand, it will almost always be relevant and you don't have to shape your draft around it. The amount of flexibility that a tri-land offers you is almost mind-boggling. You will almost always be able to put them to some use, even if it's just to help you cast your multicolored hybrid cards or to enable the cycling on a Resounding Thunder.

While Akrasan Squire, Wild Nacatl, and Tidehollow Strix are all very good creatures that I would be happy taking early, I would usually prefer to have a tri-land even if I wound up playing the ideal deck for each of those cheap creatures.

Admittedly, there are times when Wild Nacatl is one of the best cards that you could hope for, but that situation comes up rarely enough that I couldn't feel comfortable giving up an always excellent tri-land for it. (There are also questions about the respective values of your relationships with your neighbors, but I'll get to that in a minute.)

Between the greater flexibility that they offer and the frequently more relevant effect, you can't go wrong taking a tri-land here.

Now you might ask me: "Isn't there enough additional information in the pack to let us know what we should take? You know, by predicting what our neighbors will take and ....

This pack actually does not send any strong signals. Whenever there are a lot of similarly powered cards across an array of colors in a pack, you really don't have any sense of what the person downstream from you will take. 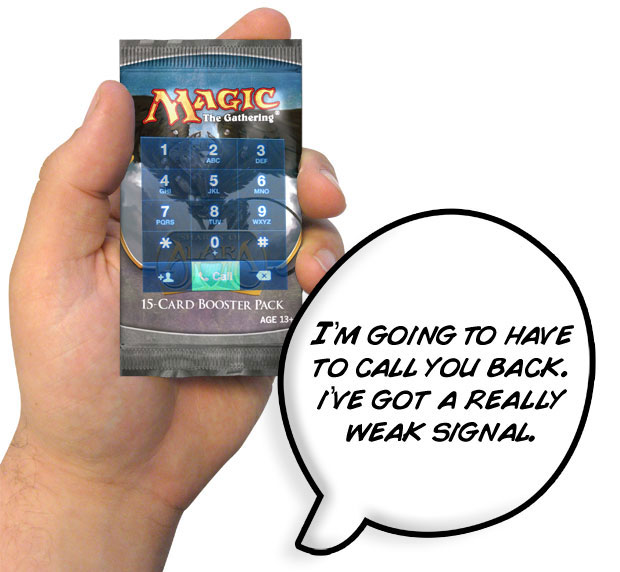 Wild Nacatl might be a better card in the abstract than Tidehollow Strix is, but if the person who's getting the third look at this pack has already drafted a Tower Gargoyle and an Executioner's Capsule, then he isn't going to blink before taking the artifact flier. 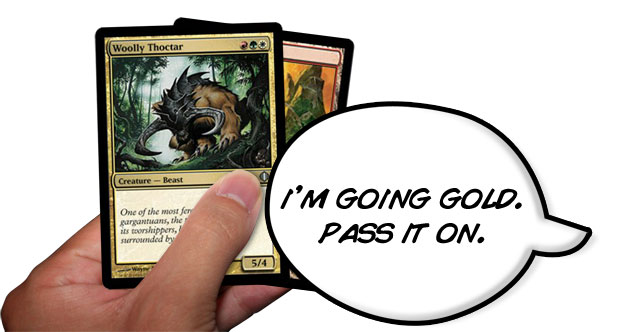 Signals can be much clearer when gold cards are around.

If someone takes an Oblivion Ring. it could find its home in an Esper deck, a Naya deck, a Bant deck, a five-color deck or as a splash in an otherwise non-green deck. That player still has a lot of flexibility with how they want their draft to go even if they don't do anything that involves explicitly disregarding their white card (such as taking a Sprouting Thrinax).

So if you're taking Esper cards like Sharuum the Hegemon, Tower Gargoyle, Sanctum Gargoyle, Tidehollow Strix and the like, but passing good white exalted creatures in the process, the player to your left could easily end up in Esper as well. But if you are able to feed the person to your left something gold, like a Woolly Thoctar, then you might be able to really guide their draft.

However, when you can't really predict what the people to your left are going to take, and you aren't presented with any overwhelmingly impressive options, you should go with the card that allows you to stay flexible.

While it's always good to stay flexible, it's even more important than usual in this format because of ....

The Increased Importance of Reading Signals

The cards in Alara Reborn are really, really good. And because they're all gold, if you are in different colors than the players to your right, you are going to be very happy.

Not only are the cards in Alara Reborn much better on average than the cards in Conflux, they're all gold, that means that the players to your right need to be in specifically the same color pairs or shards that you are in to cut off your picks.

With Conflux, you could be in Naya and the player to your left could be in Grixis, and she could very easily take something like a Rakka Mar that would have been incredible in your deck. And this happens even though the two of you are about as far apart from each other as two three-color decks can be. But if the player to your right were also drafting Grixis while you were drafting Naya, you would get your pick of the pack-three litter.

Aside from the Jund hybrid cards like Jund Hackblade or Giant Ambush Beetle, you and the player to your right would have literally no overlapping interests.

Because of the increased importance of your relationship with the player to your right, you should be more inclined to abandon some of your early picks if you think that you are getting a strong signal to draft a certain deck.

I'll be sure to explore this idea more in the coming weeks, but the fact that Alara Reborn has so many good gold cards has done another thing to significantly affect the way you draft.

The Increased Importance of Mana Fixing

The fact that literally every card in Alara Reborn is gold means that it's a lot harder than it used to be to get by with only one or two colors of mana. This means that you need mana fixing even more now than you did over the last eight months when you've been playing almost exclusively decks of three colors or more.

Without any mana fixing, you are going to be stuck with things like messy 7/7/3 mana bases. And nobody wants that, especially when you need two or more colors of mana for a big portion of your spells.

If you have a really heavy base color that you can't live without, then you want to have at least 8, but preferably 9 or 10, ways to access that color.

When you have two colors that you can't live without in your three-plus-color deck, then that means that you're really going to need your tri-lands, your Armillary Spheres, and your Rupture Spires. Without them, your deck is going to collapse on itself way more than you would ever want it to.

Don't Be Afraid to Take Mana Fixing Over Good Spells

I've heard a lot of people say that they don't want to have to spend their Alara Reborn picks on mana fixing because the spells are all so good. While this is a good reason to value things like Shards of Alara tri-lands and Conflux basic landcyclers higher, that doesn't mean you can completely avoid taking Alara Reborn mana fixing.

If you're looking at a pack and it has something good like a Deny Reality, and a Borderpost that you really need, then you're going to have to take the Borderpost. 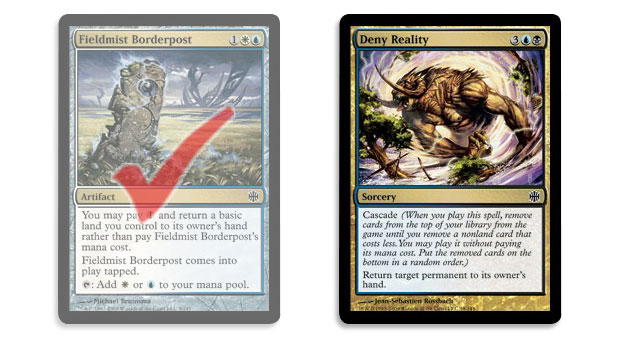 Just because you might not want to spend your early pick in pack 3 on mana fixing doesn't mean you'll always be able to avoid doing it.

If you will excuse me for a second, I'd like to tell you a little bit about a pet peeve of mine: people who try to scientifically rank third pack mana fixing.

One thing that I've specifically shied away from doing in all of my conversations about Shards / Conflux / Alara Reborn Limited is to offer up my opinion on what average pick I think the Borderposts are. I think the Borderposts are quite good and I would feel perfectly comfortable taking them third or fourth pick if I had to. But I could also see myself passing an on-color Borderpost eighth pick if I didn't need it.

While it is worth it to understand about how good you think a piece of mana fixing is in the abstract, you won't benefit too much from figuring out when you think you should take third pack mana fixing. If you need mana fixing in the third pack and you see a mana fixer and it makes sense to take it, you take it. It's not all that complicated.

I've actually got four questions for you this week.

You're playing in a Magic Online 8-4 draft and you've constructed the following deck:

It's Round 1, Game 1. It's the beginning of your third turn, and your board consists of Veinfire Borderpost, Mountain, and Goblin Deathraiders

It's Round 1, Game 1. It's the beginning of your third turn and your board consists of Veinfire Borderpost, Swamp, and Goblin Deathraiders.

It's Round 1, Game 1. It's the beginning of your third turn and your board consists of Veinfire Borderpost, Swamp, and Dregscape Zombie.

It's Round 1, Game 1. It's the beginning of your second turn and your board consists of:
Veinfire Borderpost.