Posted in Limited Information on March 6, 2007

We had a little bit of confusion when the draft began. Planar Chaos developer Devin Low was slated to be involved, but at the last second lost his seat to the agile Mark Gottlieb. Devin was not happy about the situation, although Mark and Aaron (and the rest of the table) found it hilarious.

With the confusion cleared up, we began the draft detailed above.

This turned out to be a very interesting draft. P1p1 was silly, both for card quality and signaling.

I took Sulfurous Blast on the belief it was the strongest card, although some argument could be made for the Dragon or even the Rift Bolt via splash potential. The surprise was how open blue remained, especially at a table with all these Pro Tour hot shots. I enjoy R/U in TTP, and I decided to go for it with the second pick Ancestral Vision. At P1p5 I started to hedge my bets. Green was examined if the blue plan, or even the red plan, didn’t work out. Green ended up being abandoned when the Think Twice came very late, and especially when Fledgling Mawcor was opened in P2p1. After that it was clear sailing. The only pick I really regret was P2p6, with Orgg over Tolarian Sentinel or Foriysian Totem. I’ve always been a fan of Orgg, but this wasn’t the deck for it. Orgg goes into heavy removal decks, not decks with light removal and good weenie suppression. In hindsight, either one of the other cards would have been a much better fit. 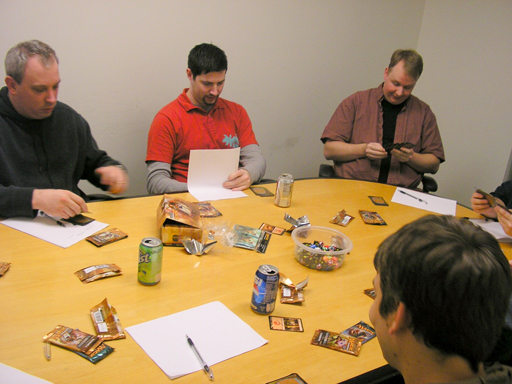 The pick I’m most happy with was P3p2, the Numot over Shivan Meteor and Ovinize. Normally I wouldn’t muck up the mana base that much for a creature, even a Dragon creature. The other two are totally fine, and come with the benefit of not needing a third color. However, on the hope that blue remained opened in PC and that people weren’t down with the Dreamscape Artist technology, I took the Dragon with the plan of picking up Harrow-man down the road. And that was a gamble that paid off. Here’s the final deck, as well as the decks off all the other competitors. 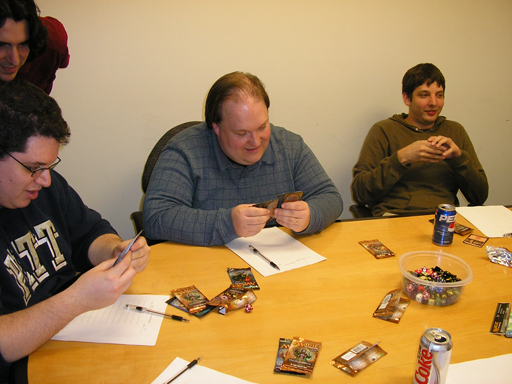 1 Urborg, Tomb of Yawgmoth 1 Magus of the Mirror 1 Jedit Ojanen of Efrava
40 Cards

1 Children of Korlis 1 Gaze of Justice

Not a bad deck at all, although none of these are “poor.” I love Paul Sottosanti’s varied use of Urborg here, as well as the insane Mark Globus mono-blue deck. How did the tournament go?

Aaron had mana problems in the first game, being forced to Grapeshot a Revered Dead right before Randy played another one. The white creatures won that game. In the second Randy started off slow with Opal Guardian while Aaron built up for a blitz casting. After the Guardian got turned on, Aaron Enslaved it and made a big attack. Randy couldn’t come back from the swing plus Enslave damage. In the third game Aaron again had Enslave but became severely mana flooded. Aaron tried to hold on, but Randy’s big and little creatures slipped through to give Buehler the match.

Mark kept an interesting hand of one Island, one Sage of Epityr, and two Errant Ephemeron on the play. His Sage gave him one more Island but no more lands. Scott, under little pressure, managed to craft a strong enough offense to force the Ephemeron on defense when they came into play. Basically goldfishing at that point, Scott just overran Globus. The second game saw Globus’ full deck come out, specifically Errant Ephemeron alongside Arena. Of course the mono-blue deck had the largest creatures on the board. While Johns did fight back, he took too much card disadvantage along the way. The third game was quite similar, with Tidewalker and Arena being the assassin combo of choice. The 8/8 creature was just too large, and Scott had to pack it in.

Mike’s extremely efficient agro deck was well-suited against Gottlieb’s midrange B/W. In the first game Mike had a phenomenal draw with turn-two Benalish Calvary, turn-three morph, turn-four Lightning Angel, turn-five unmorph Vesuvan Shapeshifter to make another Lightning Angel. Gottlieb couldn’t come back from that viciousness. In the second game Mark had more interaction, but a key Dust Elemental from Turian undoing all of Mark’s Temporal Isolation forced Gottlieb into a first round loss.

Game 1: Things started off very well with a first turn Ancestral Visions, then Keldon Halberdier into Prodigal Pyromancer. At that point my goal was to just stay alive while the pinging and card advantage carried me to victory. Orgg kept some creatures off my back, but Numot took on Utopia Vow. The Pyromancer got Midnight Charmed, but not before being supplemented by Fledgling Mawcor. Paul was dealing damage when he could, bringing me down to 9 life via Rathi Trapper and Melancholy, but after Empty the Warrens made four guys the ground was completely locked up. Dream Stalker eventually rescued the dragon, and it plus Stormcloud Djinn took the first.

Game 2: On the draw, with no suspend cards (should have mulliganed?), I was on the backpedal from the get go. Spinneret Sliver did some major damage, and after black spells cleared the way, Durkwood Tracker came down as well. The biggest decision of the match came when I was at 10 life, at this point: 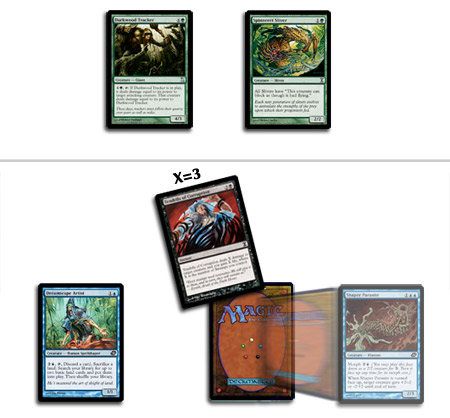 Sottosanti’s Board: Durkwood Tracker, Spinneret Sliver
My Board: Morph (Shaper Parasite; targeted by Tendrils of Corruption for 3) and Dreamscape Artist.

Paul pointed a three-point Tendrils at the facedown Parasite. I could flip it up, but who gets the effect? I could legitimately target three creatures. Shaper to save itself, Durkwood Tracker to make it a 6/1 (so Dreamscape holds it off), or outright kill the Sliver. The Tracker plan was interesting in that it saved me the most life, but it was fatal if Paul used his last mana to cast Midnight Charm on the spellshaper. Saving the Parasite was tempting in that it created a permanent blocker against the Spinneret, but at the cost of being hit by both this turn. Since I had nothing in my hand at this point, I had to play it safe and just kill off the Sliver. I took 4 (down to 6) and hoped to find some removal or a bigger blocker over the next few turns. It wasn’t ideal, but each option had its problems. Ultimately, it turned out to be irrelevant as Paul continued to lay beats and suppress my meager defenses, ending the second game in a hurry.

Game 3: This game was exciting. Both of us went 1:1 for a long time, doing points when we could and stabilizing elsewhere. Ancestral Vision was a big help, but with the Dragon taking a Vow again and Dream Stalker needed elsewhere, things wouldn’t be so easy to punch through. Luckily I had an Urza’s Factory to the rescue. Tokens were accumulating, and Paul certainly wasn’t dealing much damage, but between Vision and Dreamscape Artist, my deck was starting to run thin. I was pushing in guys when I could but that wasn’t very often, especially versus an active Sporesower Thallid. Eventually I formulated a plan, which was to hold onto a bunch of spells and make a big Empty the Warrens. Four cards left...three cards left...two cards left...when there was one card left in my library it became obvious Empty was the very bottom card. Things got a little tight. However the Factory was still working overtime, enough for one last rush on the final turn. Lucky for me, Paul had been a bit flooded by this point so he didn’t have much spellage to stop the assault. When the dust had settled, I had done exactly enough damage to Paul for the win. Paul lamented not having just one more creature to stop a 2/2 and I showed him the Sulfurous Blast I had since turn thirteen. Satisfied, we shook hands over an excellent match.

In two rather brutal games, Mike was quickly able to take down Randy. One game was due to mana troubles, the other being decided according to Randy “because Pallid Mycoderm doesn’t make white Saprolings.” What other color would they be? Turian’s Dust Elemental again dealt the final points.

Game 1: A pretty tough game, in which Globus started off with quick guys and a Fathom Seer to refill. Crookclaw Transmuter also started dealing serious points in the air. Down to very low life, I needed the exact next draw to be Sulfurous Blast... and it was! Gladdened, I began my quest to get as many 1/1s into play as soon as possible. Unfortunately, 1/1s make horrible blockers and pitiful attackers, dying in ways you’d probably expect these kinds of creatures to go down. Mark’s Primal Plasma was quite large. Eventually it was down to the Plasma versus a fresh Urza’s Factory. That sounds ok until you factor in the Arena. Arena there meant Mark was tapping four mana for every instance I needed to tap eight. That’s a tough hole to climb out of, and Mark was able to ride the land advantage to victory.

Game 3: This game was a bit one-sided as well. Dreamscape Artist quickly accelerated me into Numot, the Devastator. The Devastator took a Temporal Eddy, then came down again to work his dragony ways. Surprisingly, I wasn’t even upset when the targeted lands bounced back via Fathom Seer. Mark quickly became locked out of the game and the match.

Whew! What an epic final matchup. The scrappy writer versus future hall of famer Michael Turian. How did the grand tourney end up? Click here to see.

Posted in Limited Information on March 6, 2007