Posted in Limited Information on August 17, 2010

f you are playing a game of Limited and you draw an opening hand that has no lands in it, you will barely have enough time to blink before you decide to mulligan it. Similarly, if you have seven lands in your opening hand (and you aren't playing a clumsy, multi-color deck that is seriously lacking mana-fixing) then you are probably going to spend more time cursing in your head about not seeing a spell than you will spend deciding if you want to keep or not. 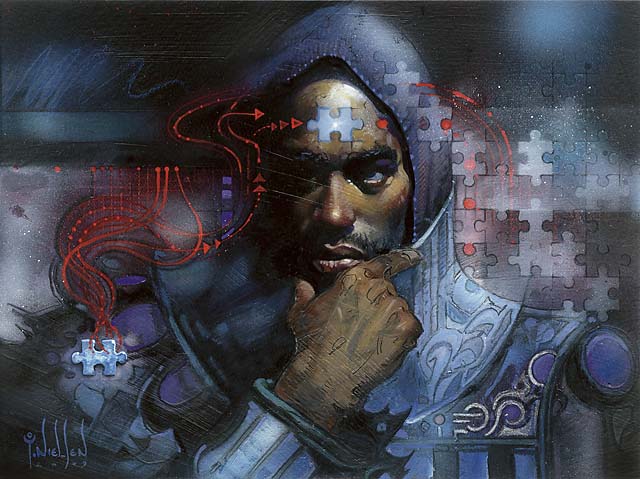 So while it is a good thing to come up with mulligan rules to help guide your decisions, you need to be ready to tackle each new hand on an individual basis.

Let's take a look at some opening hands that change drastically in value depending on the contents of your deck and then I'll let you in on the single easiest way to cut down your mulligans.

When you are making mulligan decisions it is absolutely vital that you make them with an understanding of the deck that you are looking at. Let's take a look at some four- and five-land hands and see how our decisions might change depending on the rest of our deck.

One of the reasons why a hand might be an instant keep in one deck, but a mulligan in another, is that cards vary dramatically in value depending on the hand and the deck in front of you.

For example, a Chandra's Spitfire in your opening hand might be an excellent route to victory if your deck is full of burn, or it might just be an underwhelming blocker in your blue-red deck that was a bit light on cards.

Squadron Hawk is another card that, very obviously, changes in value depending on the other cards in your deck. 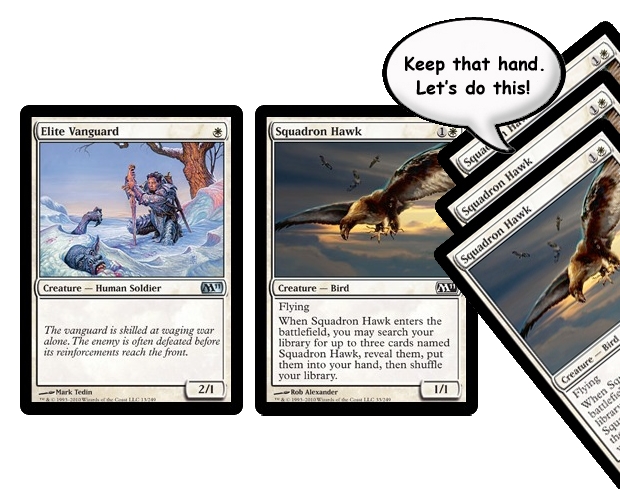 If you are playing an aggressive mono-white deck with sixteen lands and four copies of Squadron Hawk, then you will keep this hand in a heartbeat.

If you are playing a clunky white-black-red deck that has a lot of double black spells like Sign in Blood and Howling Banshee, and only a single copy of Squadron Hawk, then you would be well advised to mulligan your five Plains hand in search of something that will give you a better chance of casting your spells.

A hand of Forest, Forest, Swamp, Swamp, Viscera Seer, Cultivate, Giant Spider would be a pretty reasonable keep in a black-red-green deck that has two Reassembling Skeletons, but I wouldn't keep the hand if I were playing a straight green-black deck that didn't have any particularly good uses for the Viscera Seer (and for that matter I probably wouldn't have played the Viscera Seer, but that's a different matter entirely).

When you have four or five lands in your opening hand, you only need to consider the impact that two, or three, spells will have on your game. While this doesn't mean that it will be easy to make the absolute best mulligan decision, especially when you are playing a game and you have a finite amount of time to actually make your decision—it shouldn't be too hard for you to come to a reasonable decision. 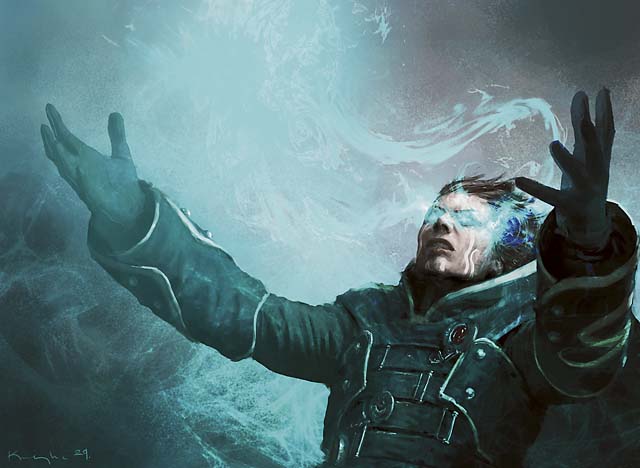 Sure, careful deliberation and a good amount of discussion after the game might lead you to realize that you would have been slightly better off keeping that hand that you mulliganed, but it is likely that there wasn't too huge of a statistical difference between the two options.

But with two-land hands you need to think really hard before you make your decision. A hand that looks terrible might actually be really good, and some hands that look very attractive can actually turn out to be quite poor upon further inspection.

If you are looking at a hand that consists of Mountain, Mountain, Sylvan Ranger, Cultivate, Sacred Wolf, Shiv's Embrace, Spined Wurm in your red-green deck with ten Forests, then you probably have a keeper on your hands as a single Forest in the next two, or even three turns will make your hand great.

But take away that Sylvan Ranger and your hand becomes pretty dicey. Even if you do draw a Forest, you won't have a play until turn three. And if you don't draw your Forest until your fourth turn, you are likely to be painfully behind by the time you can start casting spells.

With no knowledge of my opponent's deck, I would probably keep the hand even without the Sylvan Ranger, but if I knew my opponent were playing an aggressive deck, or a deck with countermagic and tempo cards then I would likely send this back.

If I were playing a black-red-green deck that only had eight Forests in it, then I would still probably keep, but I wouldn't be very happy about it.

If my opening hand consisted of Plains, Plains, Stormfront Pegasus, Mighty Leap, Cancel, Æther Adept and Serra Angel, then I would have a pretty easy mulligan on my hands. Replace one of those Plains with an Island, and then I would need to carefully consider the strength of my deck—the number of other one- or two-casting-cost spells in my deck and the number of Islands in my deck before making my decision.

The problem with this hand is that even if it draws the Island that it needs to start casting its spells, it will still need to continue drawing lands to be able to make any sort of real progress in the game. And if you don't draw the second Island quickly, to be able to cast the Æther Adept and the Cancel, then you are likely to find yourself shuffling up for the next game sooner than you'd like.

However, if my opening hand consisted of Swamp, Island, Black Knight, Sign in Blood, Æther Adept, Foresee and Air Servant, and I am running eighteen lands, I would almost always keep.

If the deck draws a Swamp, it will be able to cast both Sign in Blood and Black Knight while it waits to draw the mana it needs to cast Foresee (and after that happens, things will be able to function pretty smoothly). If the deck draws an Island for Æther Adept, that should buy enough time to draw another land to cast Foresee and get the ball rolling.

There are countless other two-, three-, four-, five-, one- and even six-land hands that might or might not be worth keeping, depending on the contents of your deck.

If you've recently drawn a borderline hand that you still have questions about, post the hand and the accompanying deck list in the forums. I'll take some of the most interesting ones and discuss them further in an upcoming article.

Why I Play Eighteen Lands

A little over two years ago I started putting eighteen lands into almost all of my Limited decks and I haven't looked back since. Why? Because I love being able to cast my spells. 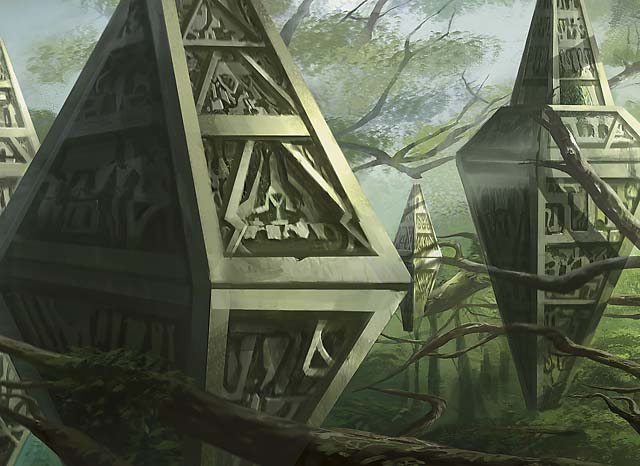 Far more games of M11 Limited (as well as Rise of the Eldrazi Limited and Zendikar/Worldwake Limited) are lost by players who chose to go down to seventeen, or even sixteen lands not having the right mana to cast their spells than by players who ran eighteen lands drawing too many.

When you run more lands you get to cut down on your mulligans and you have far fewer games where you stall out on mana for a couple of turns.

Just think about how many two-land hands become keep-able because you have an extra Island in your deck to help you cast your Æther Adept, or that extra Forest so you can cast your Cultivate, or that extra Plains to enable your Blinding Mage, etc.

And you might not realize it, but the cost of stalling out on mana tends to be extremely high.

I would far rather be able to cast my Foresee or my Howling Banshee on turn four than have one extra spell in my hand—even if it's something good.

Yes, it sucks to get mana-flooded, drawing land after land late in the game when you just need one relevant spell to be able to finish your opponent off, but that doesn't happen nearly as often as you might think it does.

The thing is, games where you are mana-flooded tend to drag on for a long time, making them much easier to remember.

If you get off to a good start, and you put your opponent on the ropes early, but then you stop drawing spells for a number of turns while your opponent claws his or her way back into the game, then you are going to sit there for about ten agonizing minutes while you hope to draw something that matters.

Maybe you will draw that Fireball right in the nick of time to finish your opponent off before you are dealt the killing blow, but when that doesn't happen—when you just draw blanks for thirteen minutes while your opponent slowly comes back from a terrible situation to beat you, you are going to remember that game for the rest of the night. Two days later when you are at work or in class you might think of that game and bite your lip a little bit in disgust. A week later when you are doing another booster draft at the shop and you see the person who beat you last time getting up to get lands for his or her deck, then you are going to remember that extremely frustrating loss.

Compare this to the times when you get mana-screwed and your opponent bashes in your brains in just under three minutes. Yes that game sucks, and it might sting a bit, but you aren't likely to remember it with agonizing detail. You will remember it as one of the games where you got mana-screwed and move on with your life. Two weeks down the road you would probably need to be actively reminded of the game to even think about the frustration you experienced when you were missing your land drops.

Posted in Limited Information on August 17, 2010