ontrol decks in Limited are an often misunderstood beast. Since control has been a viable strategy in Constructed for so long, the natural course is to compare the two. This comparison doesn't hold up well under a careful gaze, however. While some similarities exist, the tools and options available to the Limited player are far less focused than they are for our sixty-card brethren.

Powerful spells, removal, a high mana curve, and raw card advantage are all elements that people think of when they picture a Limited control deck. While some mix of these can contribute to a winning deck, this is not the only way to approach this type of strategy for Limited.

The key to building great control decks in Limited is to invalidate your opponent's avenue to victory. Here are a few of the main ways this is accomplished:

If you can negate multiple cards from your opponent with just one of your cards, you are well on your way. I'm not just talking about getting a two-for-one with a removal spell. I'm talking about cards like this:

Once on the table, a Nessian Asp can completely brick wall a large percentage of your opponent's attacking creatures. If, for example, your opponent has two Nessian Coursers on the battlefield, and you play a Nessian Asp, you have just generated virtual card advantage.

Removal in control strategies is used for especially difficult-to-deal-with threats. You aren't in a hurry here; your entire plan is to make the game go long, where you will have inevitability through a more powerful late game. This dictates using your removal on cards that can beat your great blockers.

Another way to get ahead is to focus on what is called "defensive speed." Defensive speed is the speed at which you can deploy your defensive creatures. I mentioned Nessian Asp as a way to nullify multiple threats, thereby gaining virtual card advantage. With defensive speed, though, it's more important that you have the ability to put up a sizable defense quickly.

Cards like Sedge Scorpion and Returned Phalanx are great at being quick enough to be relevant, because they cost so little. They exemplify defensive speed. With early blockers on the battlefield, you can save your spot removal for more problematic threats down the line.

Another benefit of having cheap but great blockers is that you can get even further ahead by ignoring small creatures. A 3/3 blocker on turn two allows you to ignore all 1/1, 2/2, and even 2/3 creatures your opponent plays.

Remember, you aren't trying to end the game quickly; you are trying to stabilize the board so that the game goes long, where you can take over with either some bombs or some form of inevitability.

Examples of inevitability from Theros:

Since your deck is set up for the long game, even a marginal effect like Scholar of Athreos will end the game. Whip of Erebos also adds to the party by giving you a steady stream of hasty lifelinkers from the graveyard. Prognostic Sphinx is incredibly difficult to kill and provides super-powerful hand selection while beating down in the air. There are many ways to lock up a game; these are just a few.

Managing your life total is one of the trickiest parts of playing a control deck. Remember, your life total is a valuable resource. You can use it as you see fit to put yourself in a better position on the board. The only time your life total truly matters is when it dips to 0. Beyond that, it's a tool you can and should be using to your benefit.

How about an example? 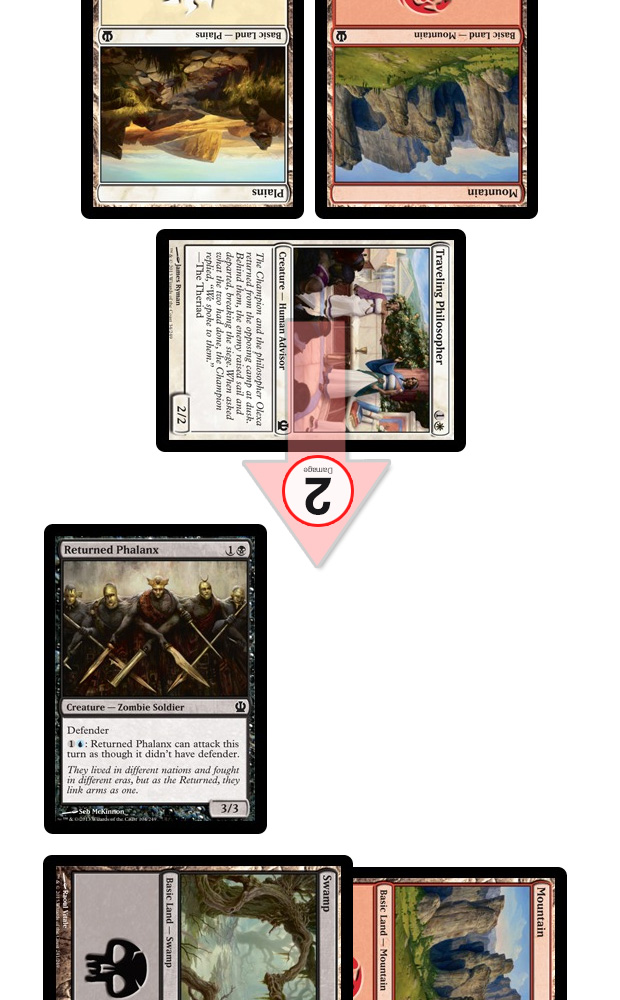 Do we block here? Generally, yes. But in this example, I am going to tell you that you have this card in your hand:

Now things are more interesting. If we assume that our opponent has a pump spell of some sort in hand, then we may just want to take the 2 damage now and pass the turn next turn, hoping he or she will attack again into our 3/3. If our opponent does, we can confidently block, knowing that if he or she goes for the pump spell, we get to destroy the Philosopher with a two-for-one off of our Lightning Strike.

This is just one simple example of us trading in some life in order to bolster our board position. These decisions come up all the time in Limited games and even more so when you are playing a control deck.

One of the tricky things about managing your life total is the presence of "reach" spells. Reach spells are spells that do direct damage or life loss to a player. They are particularly relevant versus a control player, as control is routinely forced to trade life points for board position.

Some of the more common reach spells in Theros:

Finding reasonable ways to recoup earlier life loss can be very useful for a control player as well.

There are lifegain tools in Theros, all of which come attached to reasonable effects. What should be avoided at all cost is playing spells whose only job is to gain life. These are rarely playable in Limited. While the lifegain itself is nice, the complete lack of effect on the board state is not enough to justify inclusion in the deck. You must find ways to make your creatures and other spells do this work for you.

Another nice thing about playing control decks in Limited is that they are generally more flexible than their aggressive counterparts. Most control decks have many different effects available, and can usually hone the deck to beat the specific opponent for that round. Most aggressive decks are looking to be as redundant as possible, narrowing the different types of draws they get.

Flipping this article on its side, I thought it would be an interesting exercise to take a look at how to beat these control decks. I think this will not only show a different perspective on the subject, but also solidify what we have already talked about by looking at it from the other chair.

Sometimes you have to get creative to beat a good control deck. In a set like Theros, blocking is key. Blocking can be problematic, however, given the abundance of combat tricks and heroic creatures around. Still, if you look even deeper, you can find some nice ways to beat control decks.

Prowler's Helm sees almost no play, and for good reason: it's not a very good card. But versus a control deck that is looking to nullify your threats via better blockers, Prowler's Helm can be a master. We have already established that the control deck isn't simply trying to cast one-for-one removal on every single threat we play. No, it is trying to play big blockers then pick off our best threats with spot removal.

With a Helm on the battlefield, our opponent has to kill all of our threats, and the blocking-based strategy won't allow him or her to put up much of a race against us.

Another reasonable strategy is to employ a game plan where we protect our best threats from spot removal with cards like Gods Willing. Even control decks can only have so much removal, after all. If we can set up a turn where we play our big threat and have Gods Willing at the ready, we can put immense pressure on our opponent to draw a second removal spell.

We can also fight the card advantage fight by out-drawing our opponent with cards like March of the Returned, Read the Bones, and Thassa's Bounty. Again, if the control deck is trying to block well and pick off our creatures with removal, we can just offer as many trades as possible and get our cards back in one big spell. Sometimes the control player will have access to these cards as well, making it a bit worse of a strategy.

Control decks are all about blocking. If we can present enough threats that don't care about blockers, we can overwhelm our opponent's removal suite and find an avenue to victory. Stoneshock Giant threatens a huge hit late in the game, Agent of Horizons doesn't care how many Baleful Eidolons you have, and Sea God's Revenge wipes out entire board states. These are all viable options for a big finish in Theros.

In Limited, control isn't about infinite removal, raw card advantage, and bombs. It's about speed of defense, powerful blockers, careful use of removal, and inevitability in the late game. Manage the board state first and foremost, while keeping an eye on your life total. Use it as a resource, but don't get within range of the popular reach spells.

Control is a tricky thing to master in Limited, but it's probably the most fun way to draft once you get the hang of it.