ome people mistakenly think that they have to give up power in order to remain flexible in a draft. Remaining flexible during the early stages of a draft is not merely a way to hedge your bets. Waiting to see what types of cards are flowing freely mitigates the potential downside of diving headfirst into a strategy only to see it dry up, but that's not all it does. You will also often be able to put yourself into a position where you are the one who is getting all those [insert card name here] that were going around "way later than they should have."

Further, remaining flexible early can help give you the time that you need to put together a coherent plan that will in turn allow you to put together a very synergistic and powerful deck. If you put together a deck full of cards that work well together, that will be significantly better than a deck that consists of a mish-mash of "powerful cards."

(Remember, you shouldn't think about what cards are good or bad in the abstract. Rather, you should think about them in the context of the format that you are drafting, the deck that you are building, and/or the game that you are currently playing. In most formats Shatter would be (or is) completely unplayable. But due to the high density of artifacts in New Phyrexia / Mirrodin Besieged / Scars of Mirrodin Limited, Shatter is one of the premium removal spells in the format!)

Early in a New Phyrexia / Mirrodin Besieged / Scars of Mirrodin draft, odds are you won't have to sacrifice power in order to remain open. Yes, there are times when it will make sense for you to take a stand and commit to a color, or colors, early, but those are exceptions (many of which can be avoided if you are willing to delay your gratification a bit). Now, there are reasons other than opening bombs that can, or should, push you heavily into a color(s) early. Of course if I open a Sheoldred, Whispering One I'm going to go out of my way to go black, but I will similarly work hard (though not quite as hard) to draft white if I end up grabbing two Suture Priests in my first few picks.

But once I have those Suture Priests, I'm going to need a pretty darn good reason to move into another color in a serious way until I get pretty deep into the first, or even the second pack. Sure, I might dabble a bit in another color or two if I see some good cards come my way, but I'll be willing to abandon them at a moment's notice should the situation call for it.

So with little incentive to take a stand early (no wonder the Mirrans lost the war...), it becomes particularly important to figure out ways to make the most of your noncommittal picks.

If You Control Three or More Artifacts...

If you're drafting a bunch of artifacts (Phyrexian mana or strictly colorless) early in pack one, you can easily put yourself into a position where you will be able to take advantage of some of the best metalcraft cards in Scars of Mirrodin.

You don't need to set out to draft a metalcraft deck in order to take advantage of cards like Chrome Steed, Auriok Edgewright, and Vedalken Certarch, but you should be aware of the rate at which you are accumulating artifacts. If you end your New Phyrexia pack with six or seven good artifacts, then you will be well on your way to putting together a deck that can reliably attain metalcraft.

So don't let that opportunity go to waste!

Maybe this will require you to value Flayer Husk a little bit higher than you would have otherwise, or it might lead you to take Myr Sire out of an otherwise weak pack (even if there was a slightly better nonartifact creature there). But by giving up a little bit at that point, you will set yourself up to get some serious returns once you get to the metalcraft-rich Scars of Mirrodin pack, and you might even find that there are some cool things that you can pull off with your Mirrodin Besieged cards along the way.

For example, once you have two Flayer Husks and a Myr Sire, those late Vivisections become pretty attractive. And while Rusted Slasher might not do much in the average deck, if you already have an Ichor Wellspring to go along with your Myr Sire, then you are going to have a pretty formidable creature to add to your deck. (Note that Rusted Slasher is better than it used to be as you are now less likely to find yourself staring down against an infect deck than you were before the release of New Phyrexia.

Open up a Piston Sledge? Awesome! Now you just have to figure out the best ways to make it work for you. This could be anything from slapping it on your Vault Skirge, to using it as a sacrifice outlet for the Perilous Myr that you might pick up in the next pack.

For me, one of the most interesting things about learning a new three-set draft format is that I have to reevaluate cards from previous sets.

Training Drone is a card that I initially dismissed. After all, it's clunky, it's vulnerable, it makes you susceptible to blowouts, and it does literally nothing a decent amount of the time—basically everything that I don't want to see in a card.

But, despite my initial... um... skepticism, I've warmed up to the card.

My friend and fellow DailyMTG.com columnist Brian David-Marshall tipped me off to the card in the days leading up to the release of New Phyrexia. He had been having a lot of success with aggressive mono-red or red-white decks on Magic Online. As players were slowing their decks down further and further to try to beat other controlling strategies, BDM was speeding up his decks to beat those decks before they had a chance to play out their powerful, but expensive, spells.

His decks would often have an Equipment subtheme featuring one or two copies of Training Drone.

"Training Drone?" I asked. "But isn't that card just bad?"

Brian was of course ready for this question, and he explained that his decks tended to have a lot of Equipment because he was valuing living weapons very high, and—since his decks were so aggressive—he would put a lot of pressure on his opponents' removal in the early game anyway. So by the time that he cast his Training Drones, it would probably be safe (or at the very worst act as a lightning rod for a removal spell that might otherwise have taken out a non–Training Drone card).

And during the games where he did not have a particularly good draw, or his opponent had been able to stave off his initial onslaught thanks to a strong early game of his or her own, Training Drone could put an enormous amount of pressure on an opponent several turns before he or she had the chance to cast anything large enough to trade with the Drone. 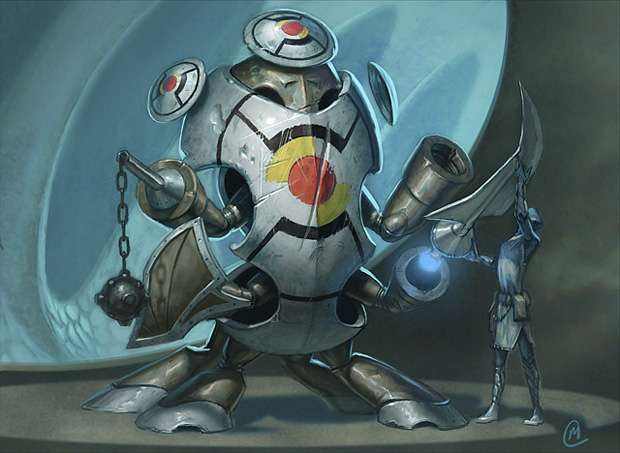 Before having played with the card, I honestly couldn't see the upside to it. It just seemed like it was strictly worse than a five-mana 4/4 (which isn't too great to begin with). You would rarely want to cast it early for fear of getting blown out, and there were times when it would just be a dead draw late.

The scenario where I spend time casting Training Drone and equipping something to it only to see it get destroyed is pretty common and not that unlike the scenario where my five-drop (that I didn't spend any time or mana equipping) gets killed by a Shatter or a Turn to Slag. I invested a card and some mana, and my opponent used some mana and a premium removal spell to deal with my creature. No big deal!

But what if I don't have a piece of Equipment, or my Equipment gets destroyed?

The fact is, you shouldn't be playing with Training Drone unless you have at least five or six Equipment cards in your deck. And much like a card in a splashed color, there will be spots when you just can't use it until far later in the game than you would want to. Is this unfortunate? Definitely. But it's just another thing that you need to factor in when you are deciding whether or not to include a Training Drone in your deck.

And while it's pretty humiliating to see your equipment get Crushed or Shattered, leaving your Training Drone to rot away on the battlefield, if you are playing against a Shatter-light or Shatter-free deck, then Training Drone can be pretty menacing. Even if it is vulnerable and difficult to use effectively, it's still a three-mana 4/4.

Keep in mind that Training Drone should never be competing for a spot in your deck with a top-notch card. When you do actually play it, it's usually going to be one of the last cards that makes its way into your deck. But it's a much higher-impact card than something like an off-color Gust-Skimmer will ever be.

Training Drone is never going to be worth an early pick (and it'll rarely be worth picking in the middle of the pack either), but if you can pick it up late in an aggressive deck that already has a lot of Equipment, then it might be able to do some surprisingly good things for you. If it seems like your opponent has a lot of ways to neutralize your Training Drone(s), then definitely board it (or them) out.

Now that we're only drafting one pack of Scars of Mirrodin, players only have one pack to get their hands on the best metalcraft cards in the format. People aren't exactly going out of their way to up their artifact counts for Razorfield Rhino or Mirran Mettle. They also have only one pack to pick up cards like Sunspear Shikari which greatly benefit from Equipment. This has led people to drastically drop their valuations of Equipment.

So even though there's less Equipment floating around, it's easier to get your hands on what Equipment is out there.

I'm not sure how long this will last. As people begin to develop a more complex understanding of the format, I think that Equipment (particularly the living weapons) should jump back up in value. But for now at least you can keep an eye on those Training Drones, and, more importantly, you can set yourself up to make the most out of the Chrome Steeds and Vedalken Certarchs that make their way to you far later than they should. 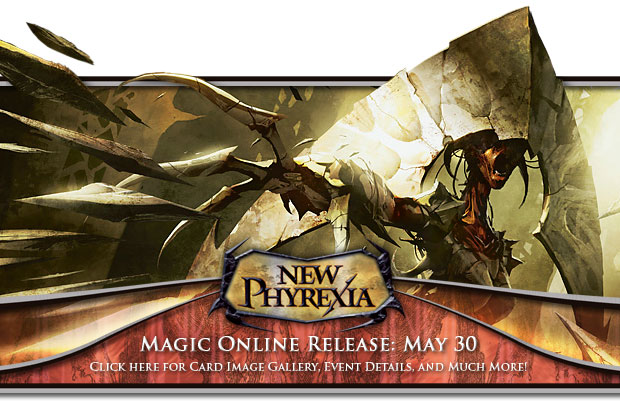