hy are you making that attack? You probably have a trick, or maybe you're bluffing... It's not like you just wants your creature to die, do you?"

When you start playing Innistrad Limited in a few weeks, there will be times when you will just want one of your creatures to die.

No, you won't want your creatures to die because you're teaching someone how to play and you want them to win, or because you're pretty sure you left your stove on and you're looking for the fastest way to finish your draft so you can rush home to make sure that nothing burns down—but because you have a spell with a morbid ability on it, and you really want it to trigger.

What is morbid, you ask, and how does it work?

To understand, let's take a look at Hollowhenge Scavenger, the morbid card featured on the Innistrad Mechanics Article. 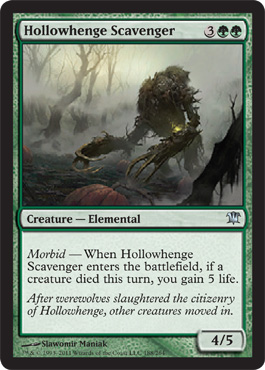 (Still not exactly sure about how double-faced cards, flashback, or the other Innistrad mechanics work? Then check out the Mechanics Article to learn more!)

Obviously you would prefer to have one of your opponent's creatures die to set up morbid, but things won't always go according to plan. Sometimes the only way that you will be able to trigger your morbid cards is by letting one of your own creatures die in combat, or by setting up a trade that is (at least on the surface) somewhat unfavorable for you. 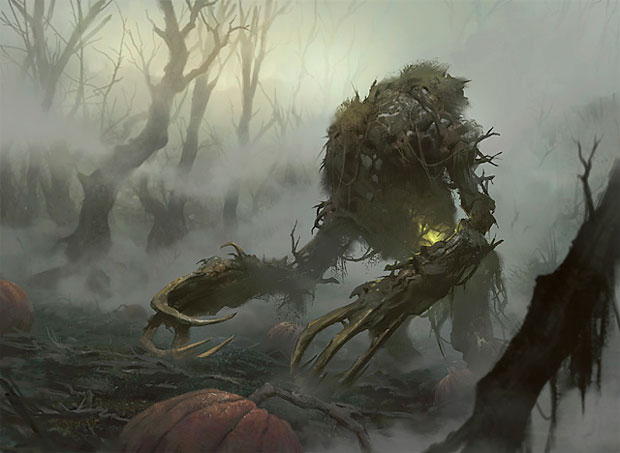 Is it going to be worth letting one of your best creatures die to gain 5 life from Hollowhenge Scavenger?

Not unless you're way behind the eight-ball, and the only way that you'll have a chance at surviving your opponent's next couple of attacks is by gaining that life.

But if you're in a tight race, and you have the option to swap one of your marginal creatures (that is unlikely to have much of a subsequent impact on the game) for an extra 5 life, then you very well might jump at that opportunity.

Five life can be a pretty big swing in a close game, but a lot of the time that extra life won't be all that relevant.

If only I could show you a card with morbid that will have a huge impact in almost any game that it's played...

Will every card featuring the morbid mechanic be as good as Morkrut Banshee? I've only seen a small percentage of the set, but I have no problem going out on a limb and saying no, they won't. Morkrut Banshee is sure to be one of the best morbid cards in the set, and should be an easily first-pickable card.

When your opponent knows that you could be setting up to play a Morkrut Banshee, or even just a Hollowhenge Scavenger, he or she is going to adjust his or her play accordingly. That means that you are more likely to get away with attacks where your opponent probably could block, but doesn't want to for fear of getting blown out by a morbid creature.

Is this different from representing a combat trick to your opponent?

If you are playing a Magic 2012 draft and your opponent thinks that you might have a combat trick, like a Titanic Growth or a Slaughter Cry, then your opponent might play to try to get you to use it early so he or she won't have to worry about it later. After all, it's way better to let your Blood Ogre die to a combat trick than it is to watch your Gorehorn Minotaurs get slain by a unaccounted-for pump spell.

Further, your opponent might want you to tie up most of your mana casting a pump spell on a key turn, when you could otherwise spend that time further developing your board. 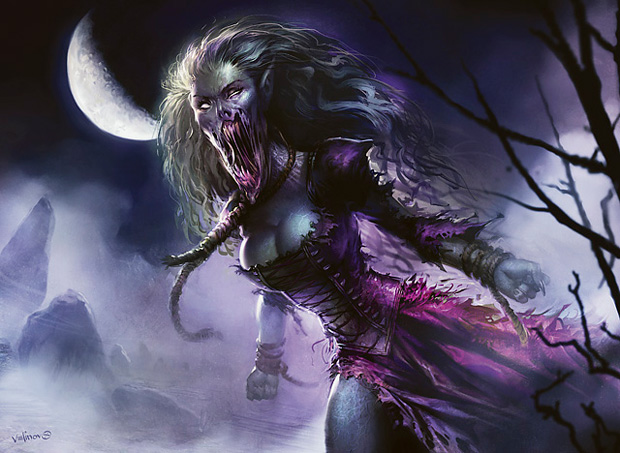 If your opponent is playing around a Morkrut Banshee, he or she will want to avoid making any trades, and will want to keep everyone's creatures alive during your turn—or risk seeing his or her best creature die while you add a 4/4 to your side of the board.

Big swings? Don't mind if I do!

While you can use a removal to kill one of your opponents creatures before you cast a spell with morbid, you'll generally need a lot of mana for that one-two punch.

Yes, this will happen from time to time, particularly if there are any cheap spot removal spells in Innistrad (think Wring Flesh or Shock from M12). But most of the time, you're going to set up your morbid abilities through creature combat. 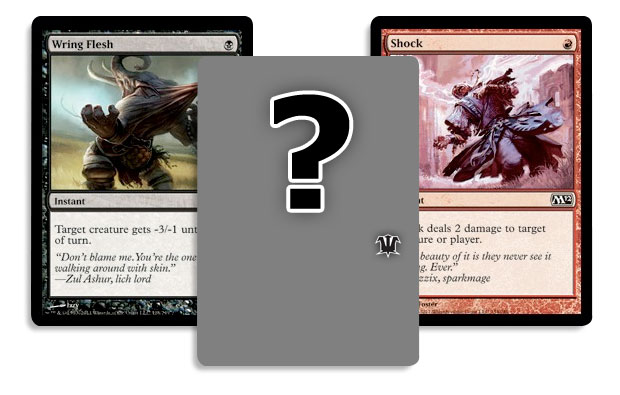 But what if your opponent isn't letting you set up any trades, and is consequently keeping morbid turned off? Should you wait until you get enough mana so you can cast your removal spell, and your creature with morbid all on the same turn?

Well, that depends on what morbid creature you have.

If you have a Morkrut Banshee, then it's probably going to be worth waiting until you can get full value out of it. After all, killing one of your opponent's best creatures is nothing to scoff at.

But if you have a Hollowhenge Scavenger, then you shouldn't give up a whole turn in hopes of gaining 5 life at some point in the future.

Yes, it's a bit unfortunate to give up on some of a card's potential value, but you need to keep in mind just how much you will gain out of having a 4/5 on the board for several extra turns. If you are able to prevent your opponent from attacking you for 5+ points of damage, then you'll obviously be coming out ahead as a result of your decision. If you are able to get a couple of profitable attacks in with your 4/5, then you'll once again be getting your mana's worth.

Creatures with high power, and low toughness are quite good when combined with morbid cards.

Why? Because they are more likely to get into trades on your turn.

If you're playing an M12 draft, and you have a Lightning Elemental, is your opponent going to want to sit back and take hit after hit from it for fear of you having a pump spell?

No, of course not. Unless your opponent's only untapped creature is a Serra Angel or a Flameblast Dragon, your opponent is going to block your Lightning Elemental with whatever's on hand so as to not watch a huge chunk of his or her life total disappear with every hit. 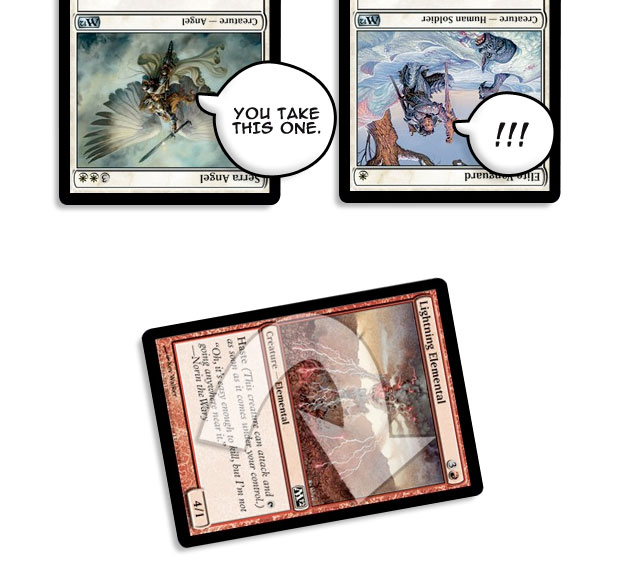 While Lightning Elemental's fragility will rarely work to your direct benefit in M12 Limited—you want to clear a path for your Lightning Elementals, and watch as your opponent's life total quickly disappears—a lot of good things will happen to you in the world of Innistrad Limited when you have creatures on hand that will entice trades.

Defensive-minded creatures with high toughness but low power won't combine particularly well with morbid creatures, but they will serve as a good way to minimize the effectiveness of opposing morbid cards.

If it turns out that morbid-based strategies are particularly popular, then decks full of defensive creatures with low power and evasion creatures might become a good counter-strategy in Innistrad Limited.

If you haven't been their recently, now would be a great time to take a look at the Innistrad Card Image Gallery. There are already a bunch of cards that I'm hoping to open at the Innistrad Prerelease, including Fiend Hunter and, of course, Devil's Play.