he earliest reports about Rise of the Eldrazi indicated that the format would be slow. Much slower than anything we've seen in years. However, that does not mean that you can't get significant value out of drafting an aggressive deck, especially if that aggressive deck has a good mid-late game to fall back on.

Rather, the very fact that Rise of the Eldrazi Limited is a relatively slow format means that there are significant benefits to be gained for being faster than your opponents. With an aggressive deck you can punish opponents who have decided to ignore their early game, as well as those whose draws caused them to stumble a bit.

While the vanilla Glory Seeker and the life-gaining Lone Missionary are nothing special in Rise of the Eldrazi Limited, there are still a number of good aggressive creatures to choose from, and a number of good opportunities to draft a deck with an excellent early game. The best aggressive deck in the format, and arguably the best strategy overall in Rise of the Eldrazi Draft is white-blue level up. 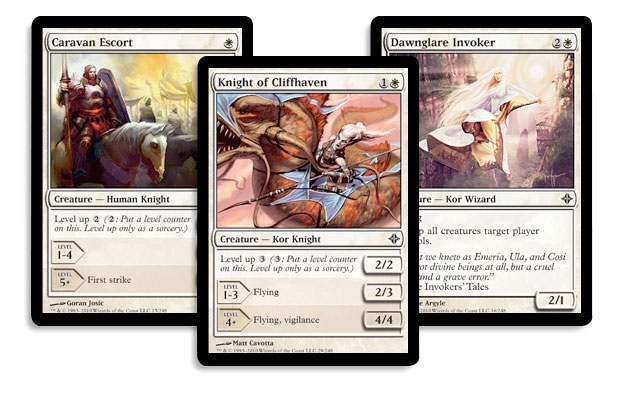 The fact that leveling strategies are the most powerful aggressive strategies should come as no surprise as the aggressive creatures that tend to shine in this format tend to have level up, or some other way to stay significant in the late game. In white, alone, we have Caravan Escort and Knight of Cliffhaven to level up with as well as the standout Dawnglare Invoker (who, while unable to level up, is a very solid creature during the early game and can win almost any game for you on its own, should it survive until the latest stages of the game), all in the common slot. And in blue we have Skywatcher Adept, Hada Spy Patrol, and Champion's Drake in common and uncommon.

The fact that so many of the best aggressive creatures have level up, or get better when surrounded by level up creatures, makes drafting a bunch of levelers an ideal way to put together an aggressive deck.

But what makes the white-blue level deck really shine are the enablers. Venerated Teacher and Time of Heroes are both very first-pickable cards that, in a level up deck, can turn an otherwise average start into something that's nearly unstoppable.

Let's take a look at the common and uncommon level up cards in white, blue, and black to see if we can get a better understanding of how we can level our way to victory!

Venerated Teacher is a card that is much better than it might look at first glance. When I was first poring over the Visual Spoiler, the Friday night before the Prerelease, I thought that Venerated Teacher would be an important card in level heavy decks, but I didn't think it would be too hard to pick it up later in a draft. I figured it would be worth taking maybe 4th or 5th during the first pack, you could then scale it up higher as the draft went out. I thought that there might be situations where you would feel a need to first- or second-pick it, but I didn't see it being that special. I mean, how easy would it be to get a bunch of level up creatures? 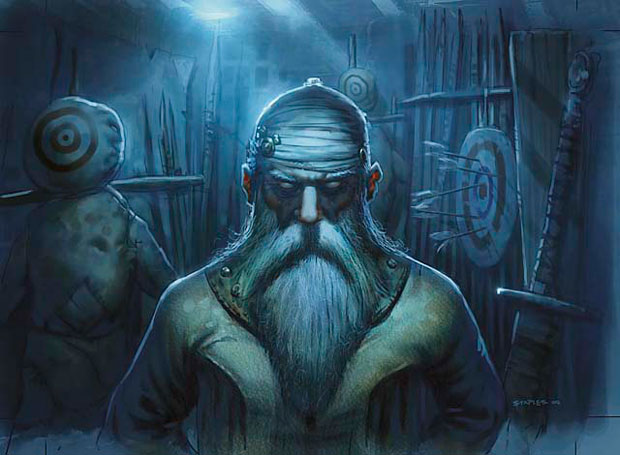 Well, it turns out I was pretty off in my initial evaluation. At least until level up strategies really pick up in popularity, Venerated Teacher is an easy card to first-pick, even in the very first pack! Yes, you need to have a lot of level up creatures to go with it, but if you are going to draft a white-blue, or blue-black level up deck there's practically no other card that you would want to have instead of this deceptively unassuming three mana 2/2.

If you open on a Skywatcher Adept and a Caravan Escort, or a Hada Spy Patrol, or a Knight of Cliffhaven or a ... (you get the picture) and then on turn three you lay a Venerated Teacher, your opponent is going to be in for a world of hurt. Even if you don't have a particularly aggressive start, if you deploy a bunch of level up creatures, and then play a Venerated Teacher on turn six or seven, it'll again be very hard for your opponent to catch up to you since you just saved so much mana, and consequently so many turns of leveling up.

Champion's Drake is my kind of card. I've played a lot of two-mana 1-power flyers in my day even when they don't come without any sort of significant bonus (Courier Hawk? Don't mind if I do!). The thing is, a 1-power flyer isn't that bad of a card to draw during the early game. It's a fairly reliable damage source, an early 1-power flyer is often worth upwards of 5 damage, and it's an excellent target for Auras or Equipment. The biggest thing that detracts from generic one power flyers is that, well, they just aren't that good. At their best, they're marginal, and at their worst they're actively bad.

Enclave Cryptologist has picked up a reputation as being one of the most impressive cards in the set. Brian David-Marshall recently ran a poll on Facebook where he asked if people would prefer to take the obviously bomby Kazandu Tuskcaller or Enclave Cryptologist first pick, first pack. The results of the poll were fairly even. While practically everyone acknowledged that Kazandu Tuskcaller was the better card, blue is just so much more of a desirable color for most people that they were happily willing to go with the slightly weaker card. 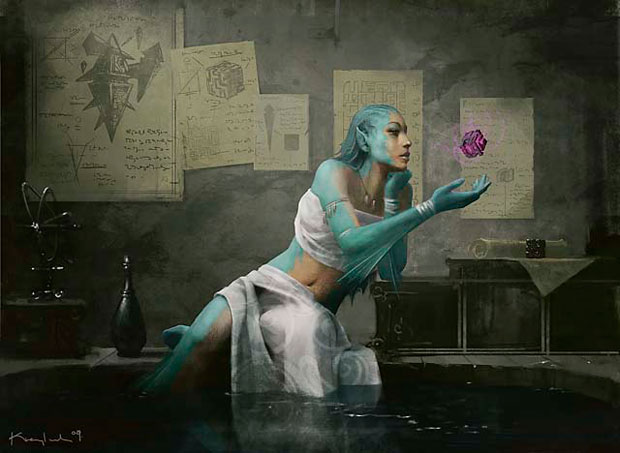 Caravan Escort and Knight of Cliffhaven are both pretty excellent aggressive creatures. Glory Seeker isn't a particularly bad creature; in fact, there are many match-ups where you would want to have it. Having a 2-power creature on turn two simply makes your start much more menacing than it would be otherwise. The problem with Glory Seeker is that its usefulness quickly dwindles as the game goes on. That means that you won't want to draw it after turn two or three, and it also means that the Glory Seeker you were fortunate enough to draw and cast on turn two will rapidly become irrelevant as both players' boards develop. Caravan Escort and Knight of Cliffhaven don't suffer from those limitations, and in fact, tend to become increasingly relevant as the game progresses. Don't hesitate to take a Caravan Escort or a Knight of Cliffhaven early, they are as good as they look.

Kabira Vindicator is a pretty great card to have, should the game go long. If you have any sort of creature stalemate, it'll no doubt end pretty quickly once you've given all of your creatures +2/+2. While Kabira Vindicator is certainly good in a level up deck, it's just as powerful in non-level up strategies that specialize in producing Eldrazi Spawn tokens. I have no problem taking a Kabira Vindicator early if that's what my deck needs, but I would pretty much always prefer to take an enabler or an aggressive level up creature over this potentially game-breaking uncommon.

Hada Spy Patrol is another rock-solid evasion creature that gets significantly better when aided by Venerated Teacher and/or Time of Heroes. Like most of the other aggressive level up creatures, Hada Spy Patrol is worth taking early, and worth getting excited over if you get it late.

Ikiral Outrider is passable, but I've come to feel that it has less of a place than even Halimar Wavewatch in an aggressive white-blue level up deck. With one level up, you get a 2/6 vigilance creature. While this is fine if you find yourself in a race where you need a sizable presence on the ground, it's pretty much never going to do anything meaningful for you on offense. While Halimar Wavewatch does almost as much on defense, it can pick up three level counters for Champion's Drake much easier, and it becomes a fairly monstrous force on offense once you've taken the time to power it up all the way. Heck, if your opponent is playing blue, a fully leveled Halimar Wavewatch is actually a dragon. If you have a Time of Heroes, or two, in your deck, or even just some good Umbras, then Ikiral Outrider becomes pretty impressive. But barring some solid enchantments that you can use to pump up a 2/6–3/10, you will want to look for other options in your drafts than the cumbersome Ikiral Outrider. 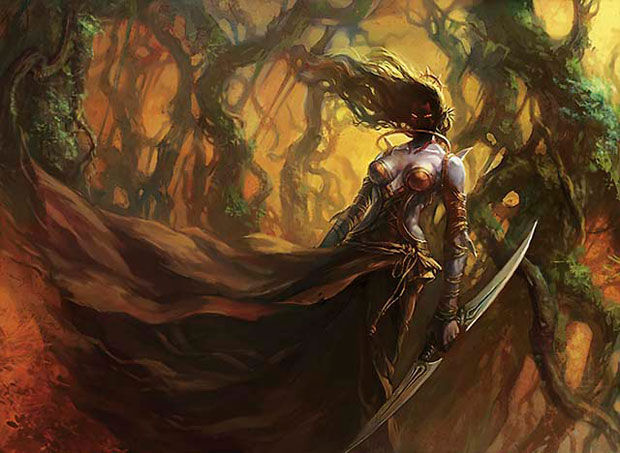 Nirkana Cutthroat is easily the best of the non-rare, black level up creatures. First strike and deathtouch are a killer combination. Even an Ulamog's Crusher has, literally, nothing on a fully leveled Nirkana Cutthroat. While I would be willing to take a Nirkana Cutthroat in the first four or five picks of a draft, I have found that it's not that special, unless you have a significant number of enablers. 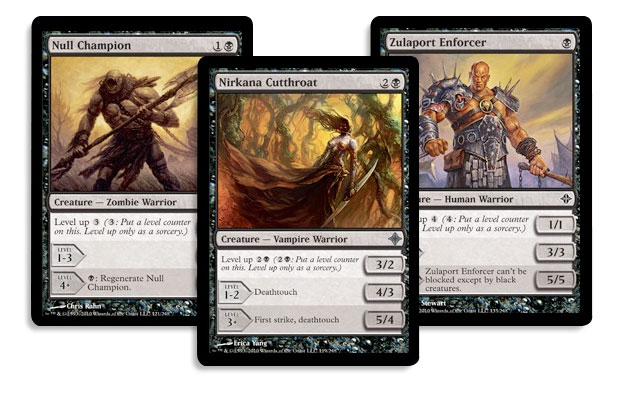 Similarly, Null Champion and Zulaport Enforcer are quite cumbersome without Venerated Teachers around to back them up. While it is relatively easy to pick up the black level up creatures, compared to their blue and white colleagues, they are particularly reliant on Venerated Teacher, in a way that most of the good blue and white levelers are not.

Again, if you are looking to draft a level up deck, don't hesitate to pick up Venerated Teachers extremely early. They will come in handy.

You Shouldn't Play Counterspells in Your Level Up Deck

Once you've taken the time to think about it, it shouldn't be hard to realize why it's a bad idea to play with counterspells in a deck that specializes in tapping out during its main phases to put level counters on its creatures.

If you pass a turn without putting a key level counter on one of your creatures, your opponent is going to know that something is up. If you leave up

when you have a Hada Spy Patrol with only one level counter on it, you will be signaling pretty strongly to your opponent that you have a Deprive, or at the very least a Regress, that you are looking to put to good use.

However, the very fact that you can only put level counters on your creatures at sorcery speed opens up a whole world of bluffing opportunities to you.

If you get the feeling that your opponent is setting up for a big turn, then you should strongly consider leaving your Hada Spy Patrol on two, one, or even no counters to represent a counterspell/bounce spell that you don't actually have.