Gimme Five (or Four, or Three)

Posted in Limited Information on February 10, 2009

hen I opened my Prerelease Sealed Deck, the very first Conflux domain card that I saw was Worldly Counsel.

Now whenever I'm looking at cards from a new set for the first time I'll glance at the mana cost, then go straight to the card text. Once I'm done processing the text, I'll look back at the mana cost again, then I'll read the card's name.

Ninety-plus percent of the time that's a perfectly fine way to read a card for the first time. I spend my time thinking about what a card does, and whether or not I think it's worth the cost. Then there are the times when I carefully break down an exact reprint that I've played with hundreds of times.

Then I feel silly.

I feel even sillier when a friend of mine sees me closely reading and rereading said reprint. Interestingly enough, in that very Sealed I wound up playing five colors, but leaving my Worldly Counsel in the board because blue was one of my splashes. 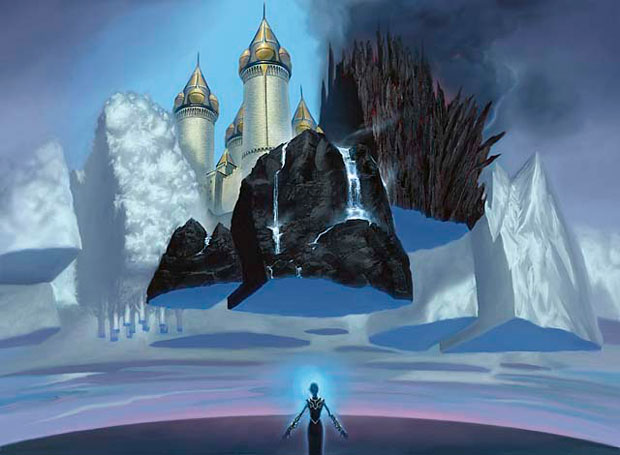 Worldly Counsel is a very reasonable card, but it's never going to be great. I'd play Worldly Counsel in any two- or three-color deck where I was a little bit short on cards, and I'd be more than happy to include it in any four- or five-color deck. But even though Worldly Counsel is better in a many-colored deck, it isn't good enough that I'd spend an early pick on it.

The good news for five-color drafters is that they should be able to get Worldly Counsel at a significant discount, because while it is merely playable for most drafters, it's OK to good for them.

Either way, expect Aven Trailblazer to be about a third- to fifth-pick quality card.

I don't need to tell you how excellent Drag Down is, but it is excellent. Drag Down is a textbook example of a good removal spell in a two- to three-color deck, but in a five-color deck, you'll be able to outright kill pretty much anything except for standouts like Meglonoth, or green monsters such as Jungle Weaver. Regardless of what type of deck you're drafting, Drag Down will be a first-pick quality card.

Voices from the Void can be extremely devastating if it's played for three or for five. The thing is, there's actually functionally little difference between Voices from the Void in most five-color decks and most three-color decks. Usually by the time you get to five basic land types, your opponent will only have about three cards in hand, so getting max value out of the card doesn't really matter.

There certainly will be times when being able to punch out those extra cards makes a huge difference, but it's not that much better in five-color strategies that they will get it later than they should.

Of course, if you have Shard Convergence and/or Armillary Sphere you might want to take Voices from the Void pretty early as you can set up some devastating early-midgame Mind Twists with it.

Wandering Goblins just doesn't speak to me. Whether I'm two-color or five-color, I don't really want to play this mana-intensive three drop.

While a 5/5 Matca Rioters is significantly better than a 3/3 Matca Rioters, three-color players are still going to grab medium to late Matca Rioters because it is a very solid creature. So, while five-color drafters get a lot more out of Matca Rioters than anyone else will, they shouldn't expect to get them too late.

In five-color decks, I'd be looking to pick the Rioters up as early as third pick or so. In three-color decks I probably wouldn't want any Matca Rioters until around fifth or sixth pick.

Might of Alara will often be just as important in Bant and Naya decks as it will be in five-color decks. In creature-on-creature combat, +3+3 will usually be enough to allow you to win any fight. Of course a full +5+5 can do wonders if you have an unblocked creature, but it's more likely that an aggressive Naya deck will need more help punching through those last few points of damage than a five-color deck will.

Exploding Borders is noticeably better in decks with four or more basic land types in them than it is in pure three-color decks. So, think of Exploding Borders as extra incentive to splash that Drag Down in your Naya deck, or that Fatestitcher in your Jund deck.

In four- or five-color decks I'd be looking to take Exploding Borders around fourth through seventh. In three-color decks I probably wouldn't even consider it unless there was nothing else in the pack.

(Hopefully it won't turn out that Manaforce Mace is just way too slow for the format, making my prediction of it being a premium card waaay off base.)

Just because you're colorless doesn't mean you can't be colorful.

Then there's Spore Burst. Finally, a card that is significantly better in five-color strategies than it is in two- to three-color strategies. Five-color decks should be able to snag this card much later in the draft than they would be willing to take it.

In three-color decks, I'd barely want a Spore Burst. In five-color decks I'd take it second through fourth, no problem.

An interesting thing about the domain cards in this set is that, with the exception of Wandering Goblins, they are all reasonable or good cards if you control as few as three basic land types.

This has a couple of implications.

The first is that five-color players aren't going to be able to rake them in too easily. They're going to have to fight for their domain cards just like everyone else does.

The second is that players who might not otherwise have a great need for basic land fixing are going to be incentivized to pick up those Armillary Spheres a little bit earlier than they might have otherwise.

So if you think it's going to be easy to draft five-color, keep in mind that there are lots of other players who want the exact same things that you do—even if they're only drafting three colors!

If you don't have any good basic land fixing by the time you are a few picks into your Conflux booster, then you probably aren't going to get the cards you need to power up that Spore Burst that you saw fifth.

Be aware that you just might not have the time to draft the mana-fixing you need make those juicy five-color cards in Conflux into easily playable threats.

If you play Mana Cylix, you'll have virtually zero colored mana problems for the rest of the game. That means your off-colored Agony Warp AND your Branching Bolt are going to be playable in your black-red deck. And you'll be able to play all of your black spells when you draw nothing but Mountains and your single Island.

You always spend a card on Mana Cylix. Best-case scenario it lets you play a bunch of key spells that you wouldn't have been able to play otherwise. Worst-case scenario, it does nothing. And by nothing, I mean literally nothing.

A good Obelisk will usually do about the same amount of color-fixing as a Mana Cylix, but it also does things on its own. If a spell does nothing but set up other spells, then those spells had better be exceptional, and there'd better not be a way that you could have set them up without wasting a card.

Sure, if your black-red deck wants to splash a green card and a blue card, and you need an extra green source and an extra blue source to make that happen, then playing Mana Cylix might appear to be an appealing option. But unless those spells are Broodmate Dragon and Nicol Bolas, Planeswalker, then I'd want to cut one of the splash cards and just support the other splash with more basic lands.

If my splash cards were Broodmate Dragon and Nocal Bolas, Planeswalker, then I'd probably just add a Forest and an Island to support them.

Yes, if I were given the choice, I'd rather play a nineteenth land than a Mana Cylix. I'm going to let you know right now, I'll be disappointed if I have to play so much as a single Mana Cylix during my next eight months or so playing Alara Block Limited.

The lesson from Mana Cylix is that playing a card that has no effect on its own is just too great of a burden in all but the most extreme of situations.

Many of the best mana-fixers in Shards / Conflux are lands such as Jungle Shrine or Rupture Spire, but they don't actually help your basic land setup (at least not explicitly).

: Add one mana of any color to your mana pool." There are also going to be plenty of times when you use Unstable Frontiers not for the mana, but to get an extra +1+1 from your Might of Alara, or an extra token from Spore Burst, or ....

Shard Convergence and Armillary Sphere are two of the best cards for setting up your basic lands, and they're also two of the best cards for fixing your mana in general. I wouldn't be afraid to first-pick any of Shard Convergence, Armillary Sphere, Rupture Spire, or Unstable Frontier. Being able to fix your mana perfectly at little to no cost is just too good of a deal to pass up.

I'm very curious to see what type of identities the five-color decks in Shards / Conflux Limited will develop. Back in Invasion block Limited, most of the five-color decks revolved around green mana-fixing and the most powerful spells imaginable. Now that the color-fixing isn't unique to green, players can play any color(s) they want as the base color(s) in their five-color decks.

Will the successful five-color decks just be regular shard decks that splash for the best cards? Or will they be more unique concoctions that look to take full advantage of the five-color cards in Conflux as well as some lesser-seen synergies between Shards of Alara cards from different shards?

In a couple of weeks, once the format becomes better defined, I'll have more to say about the five-color archetype. But in the mean time, have fun discovering it!

You've drafted your two packs of Shards of Alara and you have a pretty solid Naya deck with a green-white base and the potential to splash a Bant Charm.

You open up your Conflux pack and you see:

Posted in Limited Information on February 10, 2009