Posted in Limited Information on November 20, 2013

find it useful to check one's work occasionally. This can come in many forms, but any way you look at it, it's time well spent. The normal avenue for this when it comes to Limited is with card evaluation. I wouldn't be too hard on myself for my ideas about the cards before playing them. But after an early peek at the new environment, things change quickly and certain assumptions go from cloudy to mountain-water clear.

Just as important as finding your shortcomings as a card evaluator is recognizing your successes. You aren't just making random guesses, after all. There is some scientific method happening, as you combine your knowledge and experience of past sets with the ideas you have for the future sets. When something is working for you, continue to work it. Magic is complicated, and when you find a simple heuristic that gives you good results, stick with it.

I want to look back on a few of my early thoughts on Theros Limited and see how they panned out.

Like I mentioned last week, at first I kind of thought monstrosity was a little dull. In play, it ended up being a lot more dynamic than I thought it would be. Now I just love the subtle interplay involved with seeing a creature with monstrosity on the battlefield, and how that changes the course of the game. I also love that lowly deathtouch creatures get a boost as a result of monstrosity.

For bestow, I'm happy with my early assessment. I nailed it as a really powerful effect right away, and it has borne itself as such since the beginning.

Spearpoint Oread and Cavern Lampad have been the most disappointing bestow creatures thus far. Spearpoint Oread is decent as a 2/2 with first strike for three mana, but it's not particularly aggressive. The bestow cost being six mana makes it tough to get truly assertive with the card. Cavern Lampad falls in an awkward spot as far as bestow creatures go. The best of them are good when you cast them as creatures or when you bestow them as Auras. The mediocre ones are good on one half, but marginal on the other. Cavern Lampad inhabits the third category: kind of lame in either configuration.

It's not that the card is unplayable or anything, it just isn't as efficient as its friends. 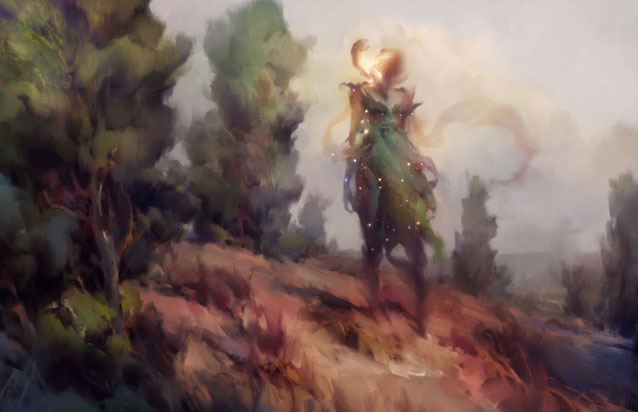 There was one hole in my assessment when it came to bestow creatures, and that was Hopeful Eidolon. I thought that Baleful Eidolon was pretty good; getting to make essentially two deathtouch creatures seemed like a great way to grind our opponent's resources down. When I saw Hopeful Eidolon, I figured that bestowing it would be good, but that the 1/1 with lifelink it left behind would be unimpressive.

I was sort of right. The 1/1 with lifelink is unimpressive. What I did not do was take the whole bestow equation a step further. What happens when you bestow something else onto said 1/1 lifelink creature? Now you have another creature ready to do battle and swing some damage races in your favor.

Creatures with native abilities like lifelink and trample wear bestow Auras very well. Additionally, you can look at the bestow cost for each one and get a good idea of how good it is. Bestow cost of four is rare (only two cards have it—Hopeful Eidolon and Leafcrown Dryad). Bestow for five is the next step, and by the time we get to bestow six or seven, we expect great things. And if there aren't great things happening, then we expect the creature to be great on its own.

When I first looked at the removal suite in Theros, I saw that it was generally conditional and expensive. This normally leads to a slow format, as early blockers are allowed to survive, thwarting the rush of the aggressive decks. Is Theros a slow format? Not really. I would call it an average-speed format. This is one of the best things about Theros: you can play fast, medium, or slow. (Or as we Magic players say, aggro, midrange, or control.)

How does each deck work in Theros? I think if we understand this, we will have a better understanding of both how to draft—and play against—each style of play.

Aggressive decks in Theros rely heavily on combat tricks, the heroic mechanic, and tempo boosts from bestow creatures. Without proper access to cheap removal, these decks have to power through the early blockers with combat tricks. Thankfully for them, there are combat tricks everywhere in Theros. Heck, even black and blue get some tricks in this set. Free from the constraints of cheap, instant-speed removal, these decks can power through blockers and get their heroic creatures bigger in the process. 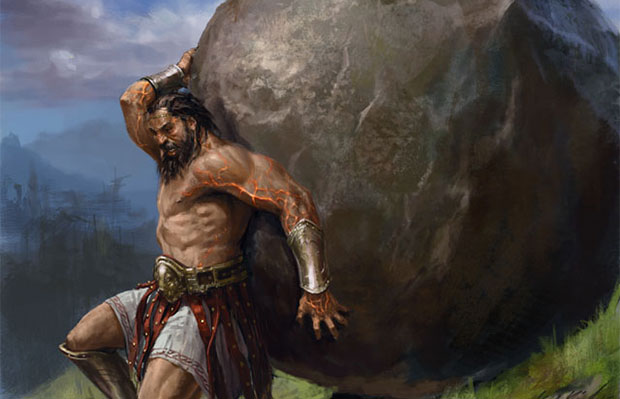 How do you beat this strategy? Well, by blocking, still. Keep the early blockers in; there are tons of them in Theros. But augment your early game by taking and playing certain blockers early. Creatures with deathtouch are particularly good, as they can ignore almost every combat trick in the set, and happily block anyway.

Big power and toughness numbers for cheap go a long way as well. A 3/3 blocker on turn two will do good work against the early plays from our aggressive opponent.

Midrange decks are the hallmarks of most Limited sets. Most decks fall into this category, mainly because crafting a great aggressive or control deck is difficult. Theros makes drafting midrange decks especially easy. Normally, I want to cover my bases with my midrange decks. Threats, removal, raw power, efficiency—I want all of these things in my deck. But one thing I really look for with this type of deck is inevitability. The kind of card that gets me out of late-game stalls and hopefully isn't dead in the earlier stages of the game.

Kind of like the bestow and monstrosity creatures. Well, exactly like them. They do a marvelous job of turning late-game stalemates into decisive finishes. They offer exceptional mana-sinks in the late game as well, which I appreciate.

The midrange decks in Theros have a built-in late-game thanks to these cards, and I think it adds to the format as a result.

Drafting control decks has always been tricky business. You need an early game that can survive the first rush of creatures, along with a late game that can seal the deal. These are usually mutually exclusive.

Many think that building a control deck in Limited is akin to picking all the removal and having a bomb on hand to clean up the mess. While these are welcome ingredients in a control deck, the dearth of efficient mana in Theros has helped highlight something that is true of most Limited control decks: it's the blockers that matter.

This is why many of the best control decks in Theros have green as a main color. With green, you get cards like these: 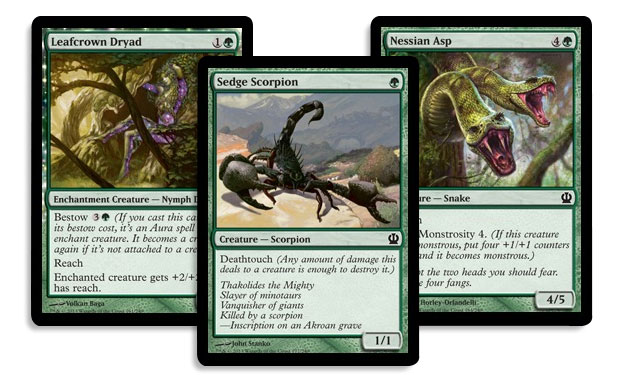 All of these are excellent blockers for their price. When you start combining Leafcrown Dryad with Sedge Scorpion, or start making your two-headed snakes really big two-headed snakes, you'll feel very powerful. It's just so easy to go into full shields-up mode with access to cards like these. It feels like they were made for a control deck.

When you add in cards like Nylea's Presence for mana fixing and card drawing, along with Nylea's Disciple for huge lifegain swings, you can see why green has the best building blocks in the set for a control deck.

I don't know how many Theros drafts I've done, but it's well over fifty by now. And the one thing I'm concerned about is the lack of quirky and fun archetypes to go for. I usually look for "build-around-me" uncommons around this time. (These are uncommons that beg to be built around, like Full Moon's Rise or Burning Vengeance.) These usually hint at areas of the set unexplored. They are also very powerful if you can get the right deck around them.

Where are they in Theros? There are three candidates that I see, but none really beckon me to try them out. Spellheart Chimera is the first.

The problem I see is that while it's cool to dream of massive, flying, trampling goat-things in the air, it seems quite difficult to pull off. Additionally, the payoff isn't huge or really unique.

This is the type of card I can get behind. First-picking a Kragma Warcaller then moving in on every Minotaur you see is sweet. Especially if you get another Warcaller or two. Very few decks in the format want this card, so it's not unlikely that you will get all of the Warcallers opened in the draft if you are willing to dedicate early picks to them.

I've had this guy in a deck or two, but never had a dedicated tribal Minotaur deck. I'll have to remedy that.

The last build-around-me uncommon that I see is Rescue from the Underworld.

On its own, it's more of a value spell. An additional Disciple of Phenax or Gray Merchant of Asphodel trigger is cool. Nicer still is building a deck around Rescue from the Underworld. I had a sweet deck once with some Returned Centaurs, Mnemonic Walls, Thassa's Bountys, and an Ashen Rider for my big finish. 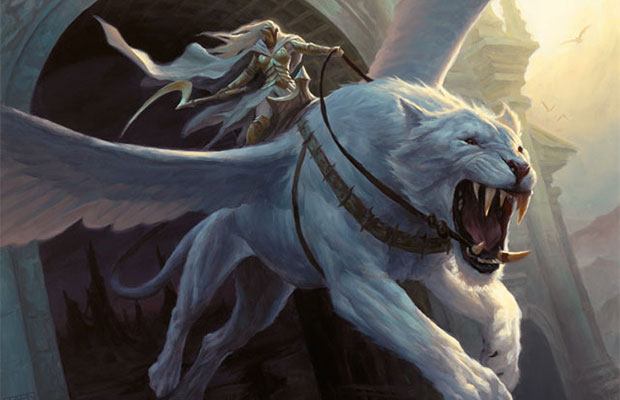 While perhaps not the most consistent deck I have drafted since Theros began, it was powerful and I did get Ashen Rider into play at least once each match. (I lost in the finals of the draft.)

Little glimpses like these excite me but also leave me wanting more and wishing there were more avenues like this to pursue. What crazy niche decks have you drafted? What card do you look for in Draft as a build-around-me? Maybe a rare?

I'm not a developer in R&D, and I don't know what kind of knobs need to be turned and buttons need to be clicked in order to make a sweet, balanced set like Theros. Perhaps the slots that would normally be taken by the build-around-me cards needed to go to other things in order to maintain the peace.

Either way, I've been very pleased with what has ended up being one of the most balanced, fun, dynamic, and fair Limited formats I have played. You never feel like, if your opponent resolves some huge bomb, you can't win. You can draft aggressive, midrange, and control decks. There are many decisions in each game that have a profound effect on the conclusion of said game. The cards are fun and flavorful, and have sweet artwork.

Hard to ask for much more than that.

Posted in Limited Information on November 20, 2013