Posted in Limited Information on July 3, 2013

aving written this column for a while now, I have to say that preview season feels like it comes around quickly. While I'm still concerned with the intricacies of Return to Ravnica block Limited, and Modern Masters draft on Magic Online, new and interesting cards start peeking over the horizon.

Since the reboot of the core set methodology that began with Magic 2010, quite a few surprises have come our way. Introducing new cards in the core set was pure genius (core sets used to be reprint-only). It gave the folks in R&D the flexibility to make the set more compelling as a product, and (more importantly to us) as a Limited format. Filling in gaps in play with cards that simply didn't exist before is an invaluable tool when designing a Limited format. 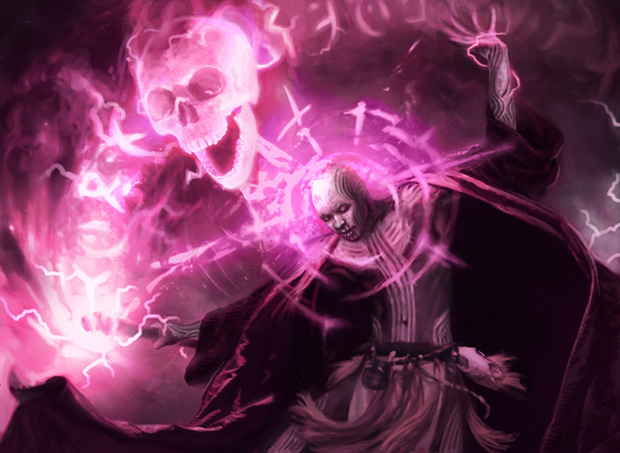 I have to admit that I was a little concerned when it first happened. I remember drafting Magic 2010 and being surprisingly pleased with how the Draft format played. Even though the cards were more basic than the "expert sets," the developers were able to craft a compelling format.

I assumed that this wouldn't last too long. Yet, I drafted it right up until the release of the new block's first set for that year. Huh. Maybe they were onto something here? I was still concerned that the formats would be too similar year-to-year, and that while Magic 2010 was fun to draft, that the following core sets may be repetitive. I also assumed that the simpler nature of the cards would eventually become tiresome.

Again I was proven wrong. I had a chat with my friend and lead developer for Magic 2013, Zac Hill, about how it was possible to take relatively simple cards and make a rich, complex Limited format from them. He used a lot of big words I didn't understand to explain it, but I came away with the feeling that this was not only possible, but also repeatable. Thankfully for us, the super-geniuses in R&D have that task; all we have to do is sit back and play.

It is with these expectations that I look forward to the Magic 2014 Core Set. This week I've got a preview card for us to dissect. Let's take a look: 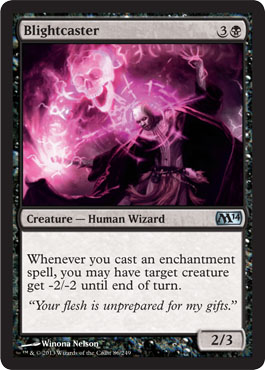 Well there it is, Blightcaster, an uncommon from Magic 2014. Instead of just talking through the ups and downs of our preview card this time around, I'm going to use it as a case study in how I evaluate cards. Sure, we could go back and forth for a while about what is good about this card, but then you would just be hearing my take on it. What would be much more beneficial is for us to go through my process so that you can take from it what you find most useful and can come to your own conclusions.

Those of you who listen to my podcast will know where I am going to start: the Vanilla Test. I have written and talked about it, and I believe that it's the correct starting point when evaluating a creature we haven't seen before.

For those unfamiliar: We will be comparing this creature's power and toughness values to its mana cost. We will ignore other abilities for the time being, as we just want to get a feel for how efficient this creature is as a body. The rest of the rules text will then sway our final evaluation as we see fit, but we can't properly apply that change unless we have a point to start from.

If we only knew the power and toughness of Blightcaster, and also knew it's a black card, how much mana would we expect to pay for it?

Normally we would just go by feel here. Of the last few sets, have there been any 2/3 creatures in black? What did they cost? (The answers are "yes" and "

"). If you haven't been playing for a long time, you can also use Gatherer to look it up, which is exactly what I did. The answer is that for the history of black creatures in Magic, there has been one two-mana 2/3, seven three-mana 2/3s, twelve four-mana 2/3s, and one five-mana 2/3.

Our answer for these purposes is three to four mana. I tend to generalize freely when I am making these assessments; the two- and five-mana options aren't important here. Three or four mana is what we would expect to pay for a vanilla (again, meaning we are considering no other rules text) 2/3 in black.

As we can see, Blightcaster is right in that wheelhouse. It passes the Vanilla Test, but it's on the expensive side of it. A 2/3 for three mana is usually quite playable, a 2/3 for four mana, though, usually needs to have something else going for it to make your final twenty-three.

Let's take a look at what exactly it has going for it:

Well then. This is not what I expected to see. Black's section of the color pie doesn't normally deal much with enchantments. Sure, they have plenty of them to cast, but when it comes to destroying, removing, or manipulating them, black simply cannot. Yet our 2/3 friend here seems to care deeply for enchantments. In fact, it rewards us for playing them.

Before we discuss Blightcaster's special triggered ability, let's talk about gravy. While images of biscuits, country fried steak, and turkey may be entering your brain, I want to talk about gravy in a more colloquial sense. Gravy means something you get at no additional cost to you. An example might be, "I just want to be at the baseball game. If my team wins, it's gravy."

Another example: "I want a 2/3 with flying for three mana, if it happens to have deathtouch and lifelink, that's gravy."

How do we apply this tasty sauce to our card evaluation? In the case of Blightcaster, essentially its entire triggered ability is gravy. It's easy to fall into the trap of thinking that you may not run enough enchantments in your deck to really take advantage of the ability, and then dismiss Blightcaster as not very good.

A better way to approach this is to consider that you are getting a reasonable (though not particularly exciting) 2/3 body for four mana. Even if you only have one enchantment in the rest of your deck, you are still getting a decent body out of the deal. And hey, if you happen to cast that enchantment, you are likely getting a free removal spell. Not bad at all.

Putting the Pieces Together

Now we have the key elements in front of us, and we can properly assess this actual card. We've got a 2/3 for four mana, which passes the Vanilla Test, although not in an exciting way. And we have a potentially powerful triggered ability as well. With enough enchantments in our deck, this card could be a board changer.

Acting as essentially a removal spell per enchantment cast, -2/-2 until end of turn will kill an opposing creature more often than not. It can also be used post-combat to finish off bigger blockers who took damage that turn. It's nice that this ability is a "may ability," meaning that if you don't want to give a creature -2/-2 until end of turn, you aren't obliged to do so. This usually only comes up when your opponent has no creatures on board and you would like to cast an enchantment, but it's a key distinction for those times.

So how good is this card? Time will tell. Overall it has the potential to be very strong if there are enough quality enchantments at common and uncommon in the set. I could see it being part of a black-based control deck, but perhaps there are options for it to fit into an aggressive build as well.

I don't see this being a high pick in Magic 2014 Draft necessarily, but the deck that wants this card, really wants this card. Once we get a better feel for the number and quality of enchantments in the set, we will be able to put the final stamp on this card. Another consideration will be the key toughness level of creatures in the set.

If -2/-2 until end of turn kills a lot of important creatures, this card gains even more value. If everything in the set has 4 toughness, though, it loses value.

An important thing to remember is that this approach gives us a baseline from which to work. Every card in every set ever is good or bad based on the context in which it lives. After about five to ten drafts of the new format, we will have a good feel for how cards like this stack up, and what their role will be in the format.

Until then, we have a solid base from which to work.

Posted in Limited Information on July 3, 2013