Green around the Gills

Posted in Limited Information on March 2, 2010

oday we're going to take an in-depth look at last week's bonus exercise. You're playing in Pro Tour–San Diego and you open up your first pack in a Zendikar / Zendikar / Worldwake draft and it contains:

Before we get to a discussion of the individual cards, let's talk for a moment about what it really means to have this many good green cards in a pack.

On a card-for-card basis, green is a fairly weak color in Zendikar / Worldwake Limited. However, the fact that green is a relatively underpowered color means that it has a strong potential to be underdrafted. The potential for top-notch green cards to come around late, because people are giving green less respect than it deserves, makes drafting green a viable strategy to pursue.

But what does it mean if you have a high density of good cards in a relatively weak color? 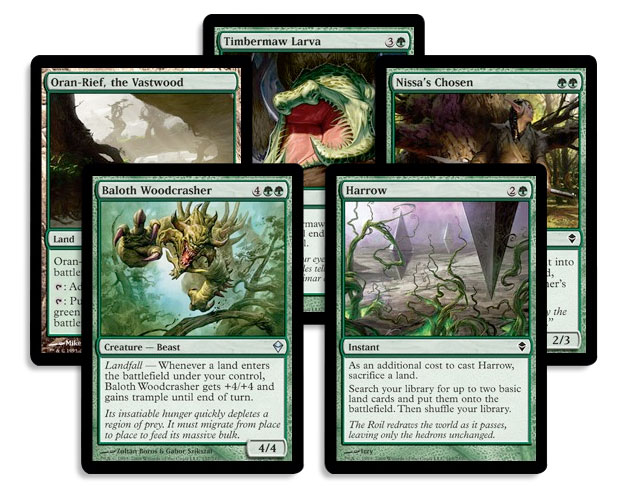 With five strong green cards in the pack, (Timbermaw Larva, Nissa's Chosen, Harrow, Baloth Woodcrasher, and Oran-Rief, the Vastwood), we have to closely consider how this will affect the drafting habits of the players near you. If there were say, four good black cards or five good red cards in this pack, we would be asking a very different set of questions. If you passed a pack with three or four strong cards in a popular color, then players would see that as a strong signal. But if you pass a bunch of cards in a relatively weak color, that might not be enough of an incentive for players to take their chances on that weak color.

As it is, even if you take a green card from this pack, it is unlikely that the players immediately to your left will take green cards of their own from this pack. Aside from the Harrow, all of the green cards in this pack require an obviously heavy color commitment. And while Harrow might seem like it can make its way easily into almost any deck given that it only has a single green mana symbol in its casting cost, given that one of Harrow's main functions is as a color fixer, it will rarely be a particularly good fit in a deck with less than eight green sources (of course there are exceptions to this, especially in multicolored Ally decks and landfall decks). 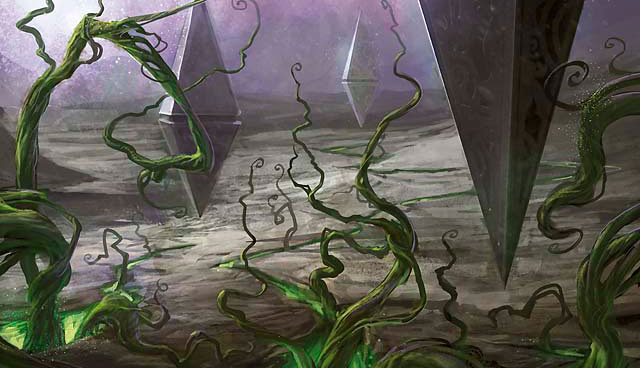 Given that the green cards are competing against Bladetusk Boar, Spire Barrage, Hedron Crab and Pitfall Trap, which are all attractive cards for popular archetypes, there's no reason to think that the players to your left will jump on green. This makes it fairly attractive to take a green card here, both because the green cards that you have available to you are quite good and because it is very likely that you will see at least one strong green card when the pack comes back to you (however if you take a green card, and you don't see any green cards when the pack comes back, that will likely be a pretty good signal that you should get out of green while you still have a chance).

In short, the density of green cards in this pack should not discourage you from taking a green card. If anything, the fact that you are very likely to table a green card, coupled with the fact that it is unlikely that the next couple of players to your left will take a green card from this pack, should act as a strong incentive for you to take something that you need Forests for.

... there were instead a high density of cards in a popular color instead?

If this pack had five good black cards instead of having five good green cards, then we would have some very different questions to consider. While it's not that big of a deal for people to see a good green card sixth or seventh pick, if someone sees a solid black card sixth pick he or she is likely going to see that as a signal that black is fairly open.

That being said, let's look at the cards themselves to figure out the best pick.

Red, White, and Blue (and a Little Bit of Black)

I didn't used to love Pitfall Trap, but it's been growing on me a lot recently. I always recognized it as a good card, but it felt a bit awkward to me. Now that Worldwake has upped the number of evasion creatures that white has access to, Pitfall Trap has way more applications than it used to. If you want to draft white, Pitfall trap is definitely the right pick for you.

I can see why the Hedron Crab would be a very tempting card to grab, as it's a lot of fun and it has the potential to be extremely powerful. That being said, however, it's really, really hard to put together an effective Hedron Crab deck. Sure it can fit in fine in your green-blue landfall deck, but unless you have multiple Hedron Crabs you won't be decking that many of your opponents. If you are dead-set on drafting a landfall deck, you would probably be better off picking up a Harrow or a Baloth Woodcrasher. Heck, the Hedron Crab even has a decent chance of making its way back to you.

The other blue card of note in the pack, Paralyzing Grasp, is playable, but barely so. While Paralyzing Grasp can deal with almost anything, it does so very slowly. While I don't mind having a Paralyzing Grasp or two in my deck, as it tends to have greater potential than other 22nd cards, the majority of the time it is pretty clunky and underwhelming.

Guul Draz Vampire is the only black card in the pack, but it simply isn't good enough to warrant first-picking. While this one-drop can be quite good in the right aggressive deck, in a lot of slower or midrange strategies, Guul Draz Vampire is going to find itself sitting in your sideboard. Even if you know you want to draft black, Guul Draz Vampire doesn't offer enough upside to justify taking it over solid cards like Pitfall Trap, Bladetusk Boar, and Baloth Woodcrasher. Even the risky Hedron Crab offers more upside than Guul Draz Vampire.

While there was a time when I would jump on any Spire Barrage I set my eyes on, being the key part of many a successful mono-red deck. I would even first-pick Goblin Shortcutters in the early days of triple Zendikar Limited, because it was simply that easy to force a great mono-red deck. Those days are unfortunately long gone. Players have taken quite a liking to mono-red and just red in general. Because of that, I don't feel comfortable taking Spire Barrage particularly early. If I get one late, or I've been getting fed some good red, then I have no problems hopping into fourth gear and taking all the red cards that I see. But I feel like I have to take a wait-and-see approach.

If you're going to take a red card out of this pack, it should definitely be the Bladetusk Boar. Even if you want to be mono-red, there's some chance that the Spire Barrage will table. Further, it's much easier for a player to abandon a red-intensive Spire Barrage than it is for him or her to let that easily castable Bladetusk Boar go to the wayside.

Important takeaway: Passing a good color-intensive card is actually less of a signal than passing a good splashable card.

There is a very good argument for taking the Bladetusk Boar here, both because it is a strong card with a light color commitment and in the hopes that the Spire Barrage tables. If you have a preference for drafting red, and/or a prejudice against green and white, then the Bladetusk Boar would be the best pick for you.

The Color of Money

Nissa's Chosen is an incredibly underrated card. Given how good it is, the fact that Nissa's Chosens regularly go 12th or 13th in drafts is practically criminal. But in a way, it makes sense that Nissa's Chosen is so underdrafted. From what I can gather, there are three main reasons why Nissa's Chosen tends to go so late. The most obvious and least significant of these three reasons is that people don't recognize how good this two-mana 2/3 is. I'd venture to say that most, though not all, players appreciate how good it is to get a three-mana quality creature for the low, low price of two mana. If I'm playing a heavy green deck, there are few cards that I would want to take over Nissa's Chosen. 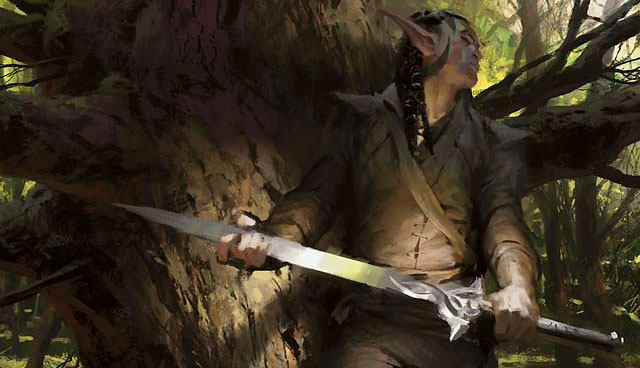 The second reason is that players don't like to draft green. This makes more sense; green is a relatively underpowered color, so it follows that green cards will often go late.

The third reason is that players don't like to be in heavy green. Now this reason makes almost no sense to me. While I don't draft green very often, when I do, I tend to be heavy, heavy green. If green is being underdrafted, I want to soak up as much of it as possible. If green is being drafted fairly heavily, then I generally want to stay pretty far away from it, leaving others to fight over the underpowered color.

While Nissa's Chosen isn't quite worth taking first out of this pack, I would look forward to getting it back 9th pick.

Timbermaw Larva is a solid card, but it just isn't quite up to the same standard as Baloth Woodcrasher. Again, I'd be happy to get it later, and there are even some situations where I would be happy to take it first, but I wouldn't want to take it first out of this pack.

Harrow is a very legitimate pick out of this pack, especially if you know that you want to draft an Ally deck or a landfall deck. However, if you don't have a particularly strong leaning towards a color- or landfall-intensive strategy, then I would stay away from this land fetcher.

Oran-Rief, the Vastwood is a very solid card, but it just isn't up to the same standard as the other green cards in this pack.

While Baloth Woodcrasher isn't the insane bomb that some people make it out to be, it's still really, really good. A 4-toughness creature is tough to kill, and while you won't always be able to attack for 8 with it, there are more than ample opportunities for it to win you the game on its lonesome. Of the green cards in this pack, Baloth Woodcrasher is the strongest option.

There are ultimately four reasonable picks in this pack: Pitfall Trap, Bladetusk Boar, Harrow, and Baloth Woodcrasher. Because of color biases, signaling, and tabling considerations, I would take the Baloth Woodcrasher out of this pack.

Posted in Limited Information on March 2, 2010