Posted in Limited Information on April 10, 2013

'd be dishonest if I told you I wasn't eagerly awaiting the release of Dragon's Maze from the moment I heard how the block is structured. I drafted the heck out of both Gatecrash and Return to Ravnica (and I still am), but the sweet allure of a full block, multicolor draft environment is something I cannot resist.

Once I found out that the basic land in each pack would be replaced by Guildgates and shocklands, I knew R&D was delivering a true multicolored environment. 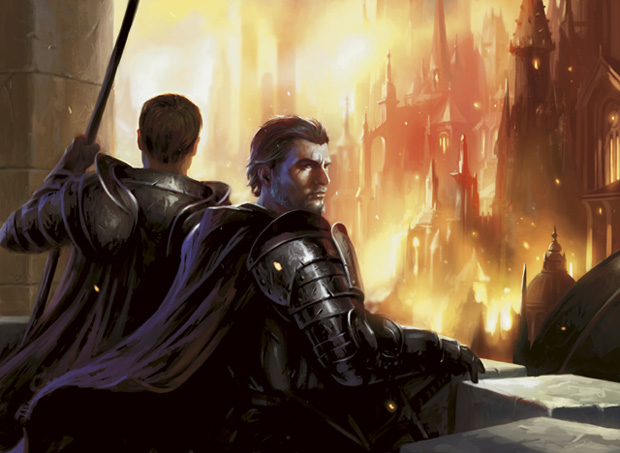 Guilds are fun. Exploring how two colors interact, which unique things are produced from such a marriage, and the weaknesses they have together is fascinating. As I have discussed in this column before, though, it can also lead you down some predetermined paths. In a wide-open multicolored environment, you get to choose those paths much more readily. You can even make up your own path, and be rewarded for it.

Now that it's officially preview season for Dragon's Maze, we get our first glimpse of how important multicolored cards—and the lands that can cast them—will be.

This week, I have not one card, but a full cycle of five cards to share with you. Let's take a look: 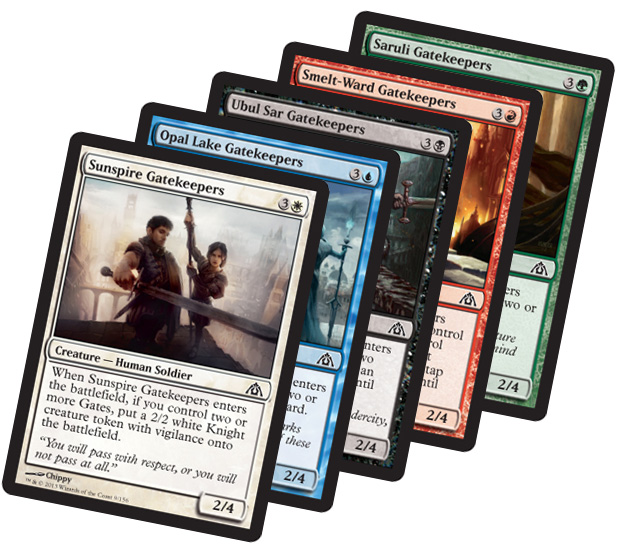 
While you let that soak in, I'll start with the things that are similar about each of these common creatures.

First, the converted mana cost is 4 for all of them. Four mana is an important slot on the curve, and these days we demand quite a bit from our four-drops—3/2 with flying, 4/4s that sometimes attack, 2/4s with reach are all in the expected range. Four mana is a competitive slot, and I'll be diving in on each of these Gatekeepers to decide if it has what it takes to make the cut.

Ubul Sar Gatekeepers is only the second four-mana black 2/4 common creature ever printed. The first one was from Legends, before such standards were truly in place. These Gatekeepers are breaking the mold, and R&D doesn't do that without good reason.

Also of note: If we put any of these to the Vanilla Test, they all pass. Sure, a 2/4 for four isn't particularly exciting, but it's rarely irrelevant, and it's usually acceptable. Interestingly, each one passes the Vanilla Test to a different degree. In an aggressive red deck, Smelt-Ward Gatekeepers as a vanilla 2/4 is pretty mediocre. In a controlling black deck, Ubul Sar Gatekeepers is a ground-clogging blocker that black doesn't always have access to.

Still, they all pass.

Besides the fact that they are all Soldiers or Warriors in their respected color races, they also all have an ability. This ability may be a telling look into the future of the full-block Draft format. It gives you a bonus when the creature enters the battlefield if you control two or more Gates. When I see a full color cycle of common creatures that care about how many Gates I control, that tells me that (A) Gates might be more important than they have been in the previous two sets and (B) I'm going to be playing more than two colors.

And now we reach the meat of the matter: the ability you get from each one. Does it represent a card's worth of value? Is it even close? Maybe it's just a marginal side benefit, not meant to be built around?

Let's take a look at each of them, in WUBRG order. 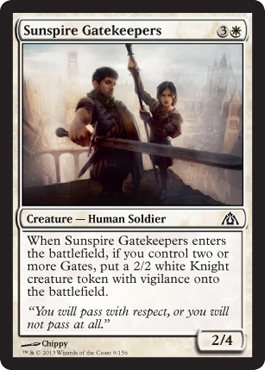 And we start with a bang. I asked before if each ability would be worth "a card." What does that even mean? It asks the question, "If this effect was itself its own Magic card, would I consider playing it?" This is a pretty gray area, as you might imagine. After playing for a few years, you start to get a feel for what "a card" is worth, although there aren't any hard guidelines.

We can use this cycle of cards to help set a basic gauge for this. If you control two Gates when Sunspire Gatekeepers enters the battlefield, you get a free 2/2 Knight creature token with vigilance. I'll start by saying that this is definitely worth a card. We are getting a whopping 4 power and 6 toughness for four mana. Impressive indeed.

This is the kind of swing that can take a good start and make it amazing, or put a quick halt to a fast start from our opponent. If this is the level of effect we get from these Gatekeepers, they are going to be very powerful additions to our multicolored decks. Let's see if they can keep it up. 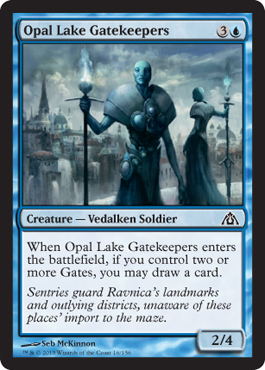 This one answers the card question pretty concisely. While not as immediately impacting as the Sunspire Gatekeepers, drawing a card is one of the most powerful things you can do in Magic. I remember when I first started playing and I didn't grasp this concept. It just didn't seem that fun to draw a card when I could cast a creature or some cool artifact.

My, how times have changed...

Again, this is a bit slower than the previous example, but a 2/4 for four that draws a card when it enters the battlefield is something I would play in essentially every blue deck I have ever drafted. And I'm sure I'll be doing so in Dragon's Maze. 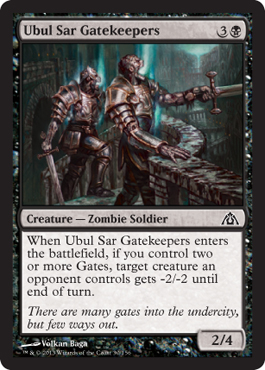 Well, that seals the deal; these Gatekeepers mean business. We are most definitely not talking about marginal side effects here; we are talking full-on spells attached to these creatures.

Giving a target creature an opponent controls -2/-2 until end of turn is often enough to just kill that creature. Even if it's not, you can set up situations pretty easily where you play this after some combat damage, such that it finishes off a tougher creature.

Remember Farbog Boneflinger? It was uncommon, cost five, and was only a 2/2. And it was a high pick in that format. If we can get enough Gates, this is going to be a solid two-for-one most of the time. I predict it will be more at home in a controlling build, as you need many Gates, and it's not a very aggressive creature. 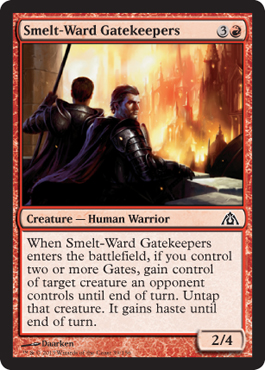 Smelt-Ward Gatekeepers is another anomaly. In the realm of common red creatures, there has been exactly one other 2/4 for four mana. It happens to be one of my favorite all-time cards for Limited: Vent Sentinel. Vent Sentinel was a cool, unique card, but it had defender.

Smelt-Ward Gatekeepers does not. A 2/4 in an aggressive deck is a strange power and toughness to have—2/4s generally attack better than you think they would, and they clearly can block well. Still, not the most aggressive play you can make on four mana.

Until you read the rest of the card. Its enter-the-battlefield effect is essentially a free Act of Treason. If you are wondering if that is worth a card, the answer is yes. In fact, it's a real card in Gatecrash! After some Gate work, we are getting the 2/4 body for essentially one colorless mana. That is insane.

One note on Smelt-Ward Gatekeepers: its ability isn't quite an Act of Treason. You will notice that it says, "gain control of target creature an opponent controls until end of turn." I assume this was put in place just so the Gatekeepers couldn't give itself haste. It's not often that Act of Treason is used on one of our own creatures anyway; it's just something to be aware of. 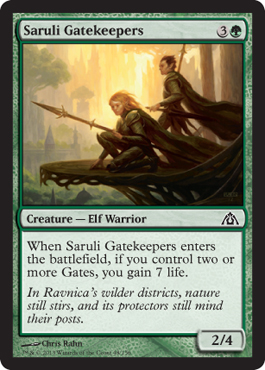 This card begs a question that comes up all the time. As an astute Limited player and reader of this column, you probably already know that lifegain on its own is generally not good. Using a full card from your hand just to gain some life is almost never preferable to just playing another creature (or land, for that matter).

The big question: How much life would we have to gain for it to be worth a full card? It's a matter of controversy where this number falls, but from my anecdotal research it's somewhere around 15 life. Some people want more, others would do it for less, but either way, 15 is a very high number.

But 7 is a much lower number. We are getting the 2/4 body regardless, which is still acceptable. The extra ability, though, doesn't quite equal a card, even for 7 life. It will certainly be relevant in tight games, and versus aggressive decks, so it's not like we are getting nothing here.

Even though at face value this appears to be the weakest of the five Gatekeepers, incidental lifegain is something that can come in handy in race situations and can change the way a game plays out. 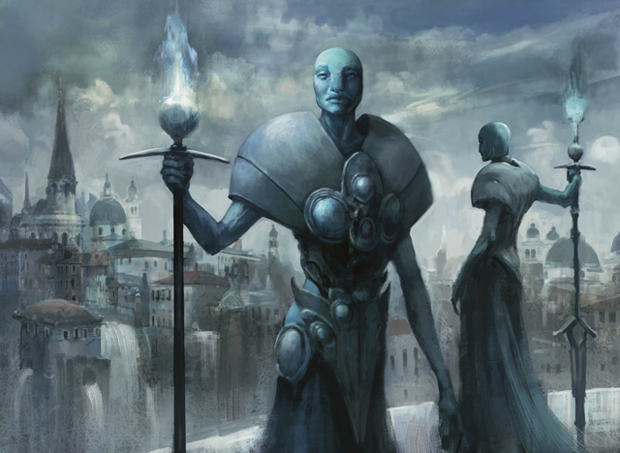 What is the best way to take advantage of this sweet new cycle of Gatekeepers? The approach I will try is to take these first, then prioritize Gates. Remember, the first pack in Draft will be Dragon's Maze, so you can snatch up all the Gatekeepers you want, and then take the Gates you get in the following packs.

It's easy to take lands over spells when they enable cards like these to be essentially two spells in one card.

I'm excited to see more Dragon's Maze cards previewed as we piece together a picture of just how much freedom we are being afforded with the newest set. I think that three-color decks will be the norm, with the potential to go up to five colors.

These Gatekeepers are sure to be an important ingredient in multicolored decks.

More to come next week!

Posted in Limited Information on April 10, 2013