Posted in Limited Information on January 23, 2013

atecrash preview season is now behind us, and that means we can start forming a picture of what the Limited landscape looks like. This is a daunting task, especially considering that Gatecrash is a large set.

I usually start by breaking down individual colors. This gives me a starting point to work from. From there, I can start looking for the hallmarks of a format. The "magic number" (more on that in a later article), how good the removal is, which mechanics look particularly strong, build-around-me uncommons, and creature quality are all factors I look at.

So where does that leave us with Gatecrash?

Thankfully, we have a nice pattern to follow, just coming off of Return to Ravnica and its guild-based structure.

Gatecrash follows the same structure, but with the other five guilds: Orzhov, Dimir, Gruul, Boros, and Simic. Gatecrash features some of the most potent and interesting two-color combinations that Magic has to offer.

Instead of looking at individual colors, I think it's more logical to break this set down by guilds. I want to take an initial, high-level look at each guild. This isn't intended to be a comprehensive guide, but rather a first impression of what each guild is trying to accomplish in Gatecrash. 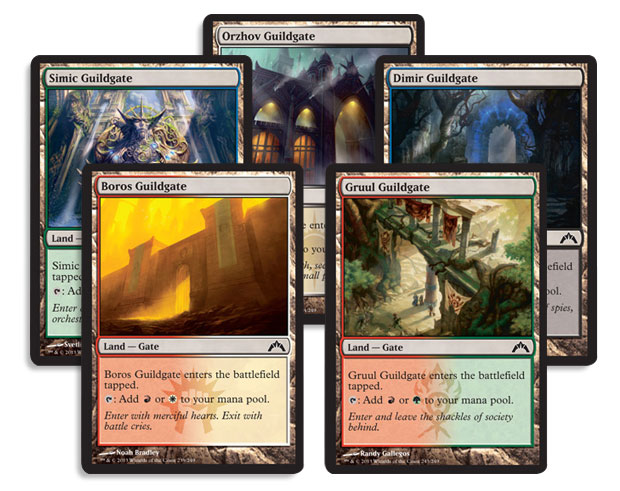 The Guildgates are a known quantity at this point. They are pretty straightforward cards, but their utility will change as we see more cards from Gatecrash.

All of them tap for either color of their respective guild, but at the cost of entering the battlefield tapped. This is a reasonable price to pay for solid color fixing, and I expect to see many Gates on the battlefield in Gatecrash Limited.

Guildgates also have other effects on the game. Some cards in Gatecrash care about Gates, meaning the presence of a Gate on the battlefield under your control will alter how the card performs. If Return to Ravnica is any indication, there won't be too many cards like this, but it's worth keeping an eye on as more cards are revealed. 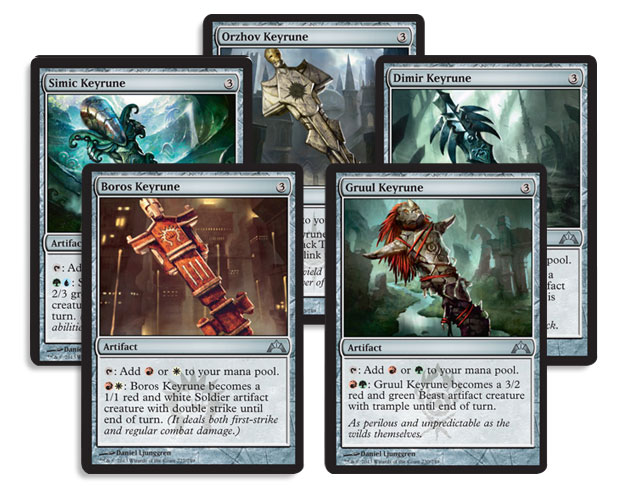 Looking back on the Keyrunes in Return to Ravnica, we see that each one represented the intentions of its guild quite clearly. Rakdos wants to beat you down, Azorius wants to fly over you for 2 damage, Izzet wants to get tricky while hitting you, Selesnya is a world of 3/3s, and Golgari wants to slow things down.

Let's use the Keyrunes from Gatecrash to guide our initial view of the guilds.

Orzhov looks very "grindy." This is a slang word we use in Magic to denote a strategy that attempts to win the game through small, incremental advantage.

Extort—Orzhov's guild mechanic—is all about the grind. Draining your opponent's life total one trigger at a time is almost the definition of grindy.

At first glance, extort looked to be a potentially aggressive mechanic. Using Orzhov Keyrune as our guide, however, we can see that Orzhov is looking to grind out its opponents. Instead of applying immediate pressure to our opponent, Orzhov prefers to gain control of the board then start extorting. Defensive creatures that enable a board state where multiple extort triggers can be paid for during a game look to have a prominent role for the Orzhov Syndicate.

Basilica Guards and Crypt Ghast are not aggressive cards. Our preview card from a few weeks ago, Syndic of Tithes, can switch roles from an aggressive attacker to a more defensive extort card.

I love this guild; it perfectly captures the idea of slowly taxing its subjects to death.

I wouldn't entirely set aside the idea that Orzhov can't race, though. I could see decks where the right pieces come together and turning guys sideways and paying for extort is Plan A.

Return to Ravnica showed us that while the guilds have specific strategies in mind, they often present themselves in multiple ways.

Dimir are sneaky. That much we can gather from this Keyrune alone. Evasion is going to be important for Dimir. Several cards have cipher, and evasive creatures are the key to maximizing cipher triggers. If we can get multiple cipher activations during the course of a game, we should be able to generate enough of an advantage to win.

Cards like these greatly reward having evasive threats on the battlefield. How many Dimir gives us will dictate just how far we can take the cipher mechanic. The fact that Call of the Nightwing creates its own evasive creature on which to encode itself is pretty handy.

Getting two triggers from Hands of Binding on the first turn you cast it can be a massive tempo swing in your favor.

As there always seems to be with the Dimir, there is more than meets the eye here. We can see that the first activated ability on Duskmantle Guildmage hints strongly toward a possible mill strategy. Sure, you can use both of its abilities in one turn, but that requires a whopping seven mana. If there is a mill deck in the block, it will come from Dimir.

Unlike the Dimir, Gruul are pretty easy to figure out: Attack with big creatures! A 3/2 Keyrune would be fine, but the addition of trample to it signifies that it wants us to attack. Much like bloodrush, trample only works when attacking.

Cast big creatures and attack with them. That's the plan.

Both of these creatures—one an uncommon, one a common—exemplify the way of the Gruul. They are both aggressively costed, easily passing the Vanilla Test. They also both have bloodrush, a potent ability that not only rewards you for attacking, but it doesn't do anything unless you're attacking.

Boros Keyrune really shows us a lot about what Boros is trying to achieve here in Gatecrash. Small, potent creatures swarm the opponent and eventually run him or her over. Boros is fast, and capable of winning a game quickly. Access to haste and abilities like first strike or double strike can make Boros a handful to deal with.

Skyknight Legionnaire is an old favorite for many drafters. I wasn't drafting when it was originally released in Ravnica: City of Guilds, but I am told it was a fan favorite. It's easy to see why, as an aggressively costed flyer with haste, it's capable of bashing your opponent quickly.

Boros Elite shows off the keyword mechanic for the guild: Battalion. Battalion is the kind of mechanic I appreciate, because it has an inherent balance built into it. It requires you to have at least three creatures, all of which able to attack on the same turn. This can be more difficult than it may seem. If you get to this point, though, you are rewarded with some sweet bonuses for your creatures. Boros Elite goes from an essentially unplayable 1/1 to a powerhouse 3/3 for one mana.

The key to the battalion mechanic lies in the fact that these creatures get the bonus only when they are attacking, and attacking with two friends. If we are not able to be the aggressor in a game, our creatures lose a lot of utility.

How good is this card when I am...

It's easy to see that if your battalion creature is forced to hang back and block, it loses a ton of utility.

One last note on Boros: I appreciate the feel that the guild has. The Boros soldiers are forming ranks in front of you, and if you give them the time to organize, they are going to knock you silly.

Simic are weird. It's often hard to figure out what they are up to. Things grow, counters are moved around. An Ooze appears. What are we to make of this for Limited?

This Keyrune doesn't point us in any specific direction. It's certainly a reasonable body, with a reasonable ability. Let's slink deeper into the vat to see what other clues we can find.

Evolve is another beautifully balanced mechanic. The number and size of the creatures you cast during a game inherently limit the power level of a card like Cloudfin Raptor. At the same time, we can imagine dream curves where we start with a turn-one Raptor and curve into some monstrous 5/5 on turn five, capping off a series of evolve triggers for the ages.

Shambleshark is similar, except we can use it as a surprise blocker, or an attacker that our opponent didn't expect. It's fascinating how the 1 toughness of Shambleshark is often preferred, as you can get your evolve trigger pretty easily just by casting anything with 2 or more power or toughness after the 'shark is on the battlefield.

Evolve is sweet, but there is even more going on in the lab. Zameck Guildmage stands out as an excellent card. With two cheap, potent abilities—which feed each other, no less—this guildmage looks to be one of the strongest yet.

Drakewing Krasis is a great example of the power you can get when you mix colors in Magic. Fliers with 3 power have long been a staple in Limited, and trample is a nice bonus, if not especially powerful in this instance. 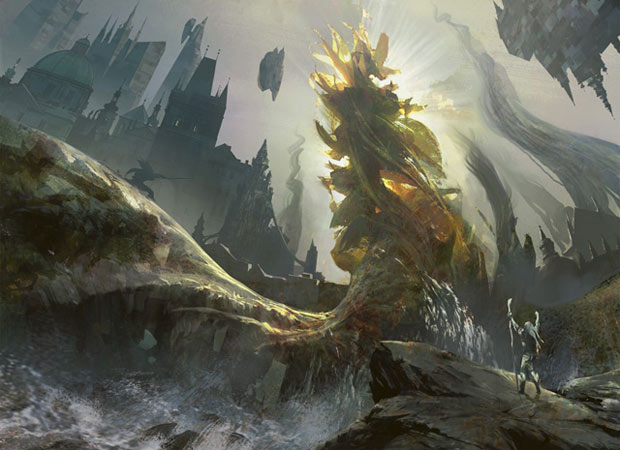 All of the guilds look strong for this set. When I wrote this I didn't have the full picture, so it wasn't possible to come to any hard conclusions. It's a good strategy early in a format to stick to guilds that suit your play style or are straightforward in their approach to winning.

I am especially looking forward to Simic. It seems to have a really awesome set of creatures and mechanics, along with some card drawing and tempo plays. I think I may just pick Simic at the Prerelease event(s) I attend.

Maybe BDM had it right the whole time...

Posted in Limited Information on January 23, 2013