How to Tell if You're Infected

Posted in Limited Information on April 5, 2011

t is clear that the infection has spread across the land. The Phyrexians have already taken over, and we would all do well to welcome our overlords with open arms into our hearts, our homes, and our decks.

Oh good, now that Skithiryx, the Blight Dragon and his cronies are gone I can go back to giving you relevant Limited strategy, whether it's "good for Phyrexia" or not. 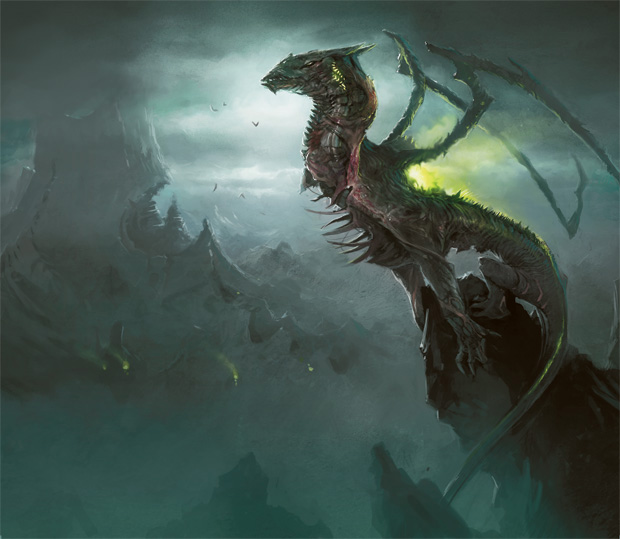 When you have a couple of Flesh-Eater Imps, a Blightwidow, and two copies of Rot Wolf at the end of your Mirrodin Besieged pack, it's clear that you will (almost certainly) be devoted to infect. And you will probably have a very powerful deck, even if the next two packs aren't that kind to you. On the other hand, when you end your first pack with only a Plague Myr and a Phyrexian Digester as infect creatures, it is pretty unlikely that you will end up with an infect deck.

When you are in-between these two extremes, your decisions get quite a bit more difficult. Every one of your picks can make or break your draft. Are you drafting infect or not? Do you want to hedge ... or jump off the ledge?

This Instill Infection is going to be good in any black deck you end up playing, but if you don't take that Contagious Nim, you might not end up with enough infect creatures to fill out your infect deck (and you will likely encourage one of the players on your right to go further into infect by giving him or her access to a decent mid- to late-pick infect creature).

That Alpha Tyrranax won't be all that great in your infect deck, at least unless you are playing a Tainted Strike or two, but if you don't end up in infect, you might desperately need a 6/5 to help you to actually close out games and give you some real oomph at the top of your curve.

Are you going to use your first pick in the second pack on that Plague Stinger that would be fantastic in an infect deck, but virtually unplayable if you don't end up with a dedicated infect deck? Maybe you should take that Sylvok Replica instead—no, it won't be fantastic, but it will always be quite good. If you don't end up in infect, you will be very happy to have a Sylvok Replica on your team instead of a Plague Stinger sitting in your sideboard. And even if you do end up in infect, that Sylvok Replica will be a welcome addition to your deck.

So how do you know when you are actually drafting infect? Whenever you start mindlessly picking every infect creature that comes your way. Duh!

All right, let me rephrase that question: How do you figure out when you should actually be drafting infect? 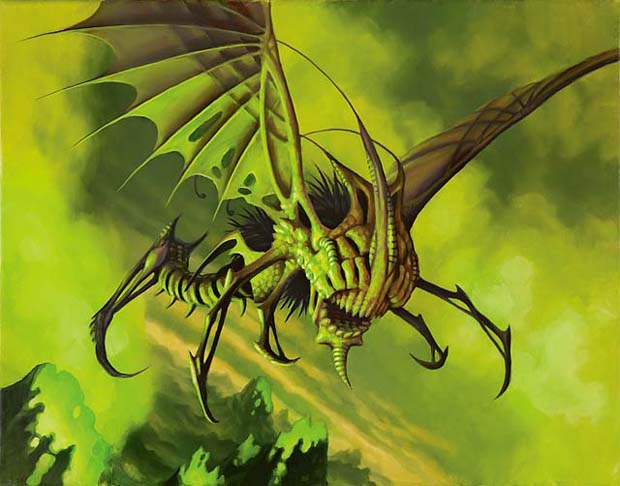 But I'm getting ahead of myself again.

The bulk of the infect creatures in Mirrodin Besieged are quite strong in non-infect decks. Rot Wolf, Viridian Corrupter, Plague Myr, Blightwidow, Phyrexian Juggernaut, and Flesh-Eater Imp are all well worth inclusions in (almost) any deck that can cast them.

So you can, in fact, take a number of infect creatures early in your Mirrodin Besieged pack without really committing to infect in any significant way.

Blightwidow is one of my favorite cards to start a Mirrodin Besieged / Scars of Mirrodin draft with. If I end up black-green infect, fantastic! Blightwidow is an obvious fit into that type of deck. It can hold down the ground and the air, and it's a sizable body that can become quite fierce when equipped. (If you've ever seen a Copper Carapace or a Piston Sledge on a Blightwidow, you know just how deadly the Spider can become.)

I'm happy to draft green-red dinosaurs, green-blue dinosaurs (or green-blue control, or green-blue evasion... what can I say, I'm on a bit of a green-blue kick at the moment), green-black non-infect, green-white, you name it. Between Blightwidow's defensive prowess and its ability to become a serious offensive threat when equipped (even in non-infect decks) this Spider just so happens to be a perfect fit into any of those decks.

So while you might think that taking an infect creature would limit your flexibility, Blightwidow actually leaves me in a more flexible position than any other colored card in Mirrodin Besieged does as I can easily go on to draft any green-based color combination, poisonous or otherwise, and have an excellent card in Blightwidow. 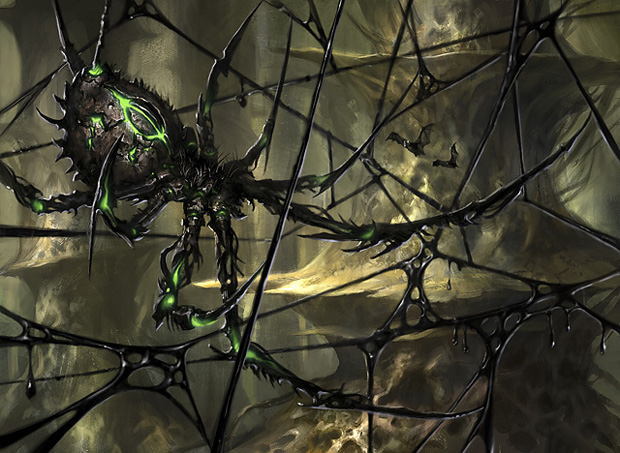 (Brief aside: while I am happy to pair green with any other color in the set, there are plenty of color pairs that I want to avoid. For example, I avoid black-white because of colored mana concerns and lack of synergies, and red-black because of how difficult it is to get enough good creatures for a deck.)

Phyrexian Juggernaut is often stronger in non-infect decks than in infect decks, because non-infect decks have more ways to draw out artifact removal. This allows you to put your opponent into chump block mode after only a single hit from this oversized infector.

Even if you aren't drafting infect, it should be pretty obvious why the artifact-destroying Viridian Corrupter is really good in your deck. (In case it's not so obvious: it's really good because it kills artifacts and there are a lot of artifacts in Mirrodin Besieged and Scars of Mirrodin.)

So if you start off your draft with a Blightwidow and a Spread the Sickness, you are going to need to make a big decision with your third pick when you decide whether to take that Septic Rats that is staring back at you or the "safer" Dross Ripper. But even if you do take that Septic Rats (which I would recommend that you do in that spot), you are still going to have a number of other difficult decisions to make as the draft goes on. Do you take the Flayer Husk or the Phyrexian Digester near the end of the pack?

If you only have three infect creatures at that point, it will be pretty likely that you will need that (admittedly mediocre) 2/1 infect creature if you want to go infect. But if you are ready to give up on the idea of poisoning your opponents, you can pass on the three-mana 2/1 and take a card that will end up being really good in any deck that you end up with.

If you get the sense that you really shouldn't be in infect, then you should trust your instincts. There's probably a good reason why you feel that way. 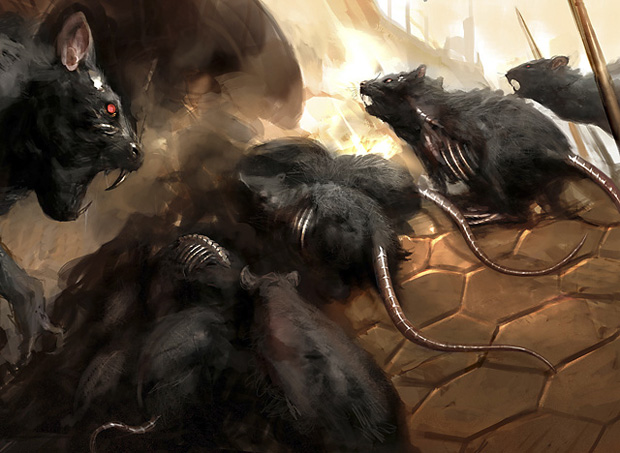 If you end pack 1 with four infect creatures, two of which would be good in any deck, and two of which are pretty marginal, then you are going to have to continue making tough decisions going into pack 2 (and possibly even pack 3 depending on how things break).

It's up to you to decide if you want to take that Plague Stinger or that Sylvok Replica at this point. Either decision would be completely respectable, and either one could easily backfire. But if you do take the Plague Stinger here, you need to continue to be aware that you might need to jump ship in a few picks if it becomes clear that you aren't on pace to end up with a good infect deck.

Yes, I know I just repeated myself. The reason for this is that your situation hasn't actually changed at all. Sure, you might have "given up on a Sylvok Replica," but that isn't enough of an excuse for you to turn on autopilot and give up control over your draft in hopes of getting all the infect cards you need to easily poison your opponents to death.

You might not get the Cystbearers, Ichorclaw Myrs, and Tangle Anglers that you're looking for. And if you don't, that's okay. Even if your speculative picks don't pay off, you could still end up with a very good non-infect deck—just so long as you aren't overly stubborn about things.

(Be warned: things are about to get a little bit dry.)

A dedicated infect deck will need at least twelve or thirteen creatures with infect in order to function properly (you can get away with slightly fewer infect creatures if you are playing an extremely controlling version of the deck, and/or if you have a bunch of Corpse Curs and Morbid Plunders, but in general if you have less than a dozen infect creatures you are going to have a lot of trouble actually killing your opponents). So if you are on pace to get fewer than four infect creatures in each pack, you should start looking in other directions.

If you are midway through pack 2 and you only have five infect creatures, you should look to draft something else. If you have six infect creatures and you have a chance at a seventh towards the end of pack 2, you can go for it, but if you think that you could end up with a good non-infect deck, I would probably play it safe and try to deal my opponents 20 damage the old-fashioned way.

While it can be difficult to completely get away from infect in the third pack, if you realize that you are only on pace to end up with nine or ten infect creatures, you are going to need to pick up some Alpha Tyrranax type cards to fill out the top of your curve and to give you a reasonable back-up plan should your opponent be able to stop your poisonous advance.

Posted in Limited Information on April 5, 2011