ure, there are times when you will want to include an alternate route to victory if you get a good finisher like a Phyrexian Juggernaut in a metalcraft deck, or a Steel Hellkite in an infect deck, but if you are piloting a deck with six creatures with infect and seven creatures without infect, you will have a lot of trouble killing opponents who offer up any sort of real resistance.

A card like Blightwidow is good in almost any green deck because of its defensive prowess (and it can still be used offensively if it comes to that), but if you deal your opponent 19 damage and nine poison counters, they still aren't dead. Even if you hit your opponent with a Plague Stinger five times, it won't make it any easier for you to clobber your opponent to death with your Ezuri's Brigade...

But the infection is spreading—and New Phyrexia offers you some very good reasons to include infect and non-infect creatures in the same deck. Take Mycosynth Fiend from the full Card Image Gallery, for example: 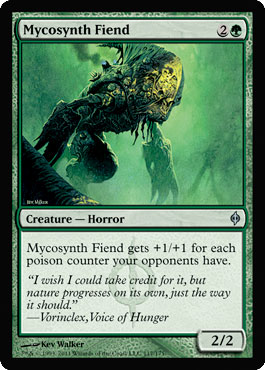 If your deck can't poison your opponent in any way, then Mycosynth Fiend is going to be a completely boring 2/2 for three. Yawn...

But if you are playing a dedicated infect deck, or a hybridized infect/non-infect deck, and you connect five times with your Plague Stinger, your Mycosynth Fiend will be a 7/7. If your opponent chooses to ignore this, he or she will be facing lethal damage in three turns—even if you haven't dealt damage from any other sources.

If your opponent tries to kill your gigantic Horror, which you had to pay a mere three mana for, in combat, he or she will probably need to trade two creatures or more for it, clearing the way for your infect creatures to poison your opponent to death. 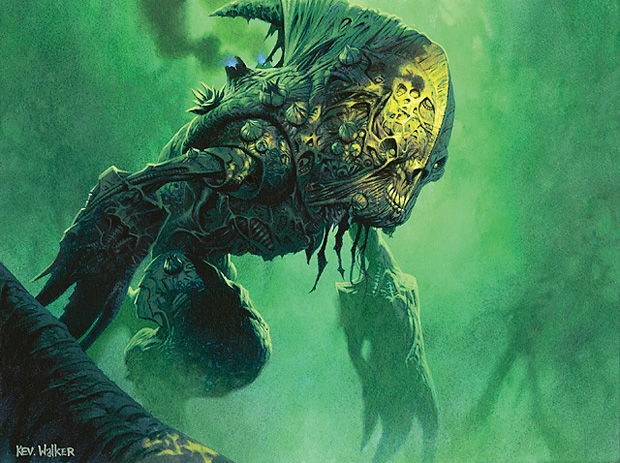 With Mycosynth Fiend on your side, you are going to force your opponents to make some really tough decisions. And whatever choice they ultimately make, it's probably going to be good for you.

Whenever I'm playing a dedicated infect deck in Mirrodin Besieged / Scars of Mirrodin Limited, I want to fill my deck with nothing but top-notch infect creatures, removal spells, and maybe a non-infect bomb or two if they're that good. But it doesn't always turn out that way.

Have you ever had to play with a Moriok Reaver in your infect deck because you needed a extra creature and you were out of infectors? I know I have. I'm never happy to include a vanilla 3/2 with virtually no offensive applications in my deck, but it's better than playing a deck with some terrible holes in its curve.

Moriok Replica is far superior to Moriok Reaver in infect decks (and pretty much all decks for that matter), but it still doesn't have any significant offensive applications. It'll either trade with an incoming attacker, or, with a five-mana investment, it will help you dig for creatures with infect, tricks, and removal spells. That's still not great, but it's completely serviceable, and it's often better than any alternatives you will have at hand.

I have no problem tossing an Alpha Tyrranax or similar non-infect fatty to top off my curve in an infect deck. Even if my opponent is able to deal with my infectious onslaught, a 6/5 can be more than enough of a threat to win by itself. And if my opponent does exert the time, the energy, and the cards necessary to deal with it, that'll make it that much easier for me to win with my infect creatures.

Mycosynth Fiend is in an entirely different league from all but the very best non-infect creatures in poison decks. It gives you all of the upside of Moriok Reaver (cheap and decent on defense if you're in a tough spot), and most of the upside of Alpha Tyrranax (potential finisher, tough to kill). The only thing that Alpha Tyrranax has going for that Mycosynth Fiend doesn't, in infect decks, is that it is an extremely dangerous threat even if you haven't been able to connect with anything else.

Yes. For only three mana you get a creature that can trade early on if the situation requires it—but becomes a monstrous threat once you've connect even a couple of times with your infectors. Heck, even if your deck isn't functioning properly, Mycosynth Fiend might be enough to bail you out because it can become so big, so fast.

Just imagine a start where you cast turn-two Plague Stinger, turn-three Cystbearer, turn-four Mycosynth Fiend. Even if your opponent is able to come up with some decent blockers or removal spells to stop your initial onslaught of infectors, your Mycosynth Fiend is going to be really tough to deal with.

While I won't be happy to run most non-infect creatures in dedicated infect decks, I can't imagine an infect deck where I wouldn't want to include Mycosynth Fiend.

Mycosynth Fiend in Other decks

If you're playing a non-infect green deck, you usually won't be able to do much offensively with your Rot Wolf and your Blightwidow. They'll still do some very nice things for you, helping you to comfortably reach a point in the game where you will be able to cast dinosaur after dinosaur that you will use to bash your opponent to bits with.

However, if you have a Mycosynth Fiend, those two early hits from your infectors will leave you with a 6/6 creature. Ouch! But Mycosynth Fiend isn't the only card in New Phyrexia that works well in decks with slight infect sub-themes. Not by a long shot.

Reaper of Sheoldred is a remarkably solid defensive creature. It can easily stare down a couple of 4/4s, and will generally solidify any ground position that you are trying to build. Once you spend five to cast a Reaper of Sheoldred, you should be able to comfortably attack with the subsequent fatties that you add to your team. 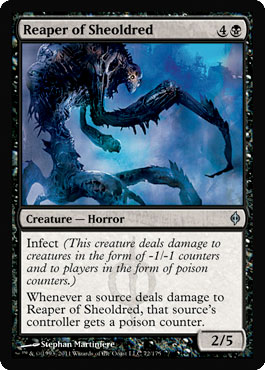 Even if you aren't using Reaper of Sheoldred to lock down the ground while you attack with other large creatures, if you get in a couple of good blocks with Reaper of Sheoldred—or if you attack with it and watch it get blocked—you will inflict some poison counters on your opponent. Now, these poison counters might not mean when you are playing a non-infect deck, but if you have a Mycosynth Fiend on your side your opponent is going to need to find some answers fast or else sit and watch as you get further and further ahead with every passing turn.

And if you throw a piece of Equipment on Reaper of Sheoldred, you are going to have an offensive threat that is as tough to kill as it is deadly. 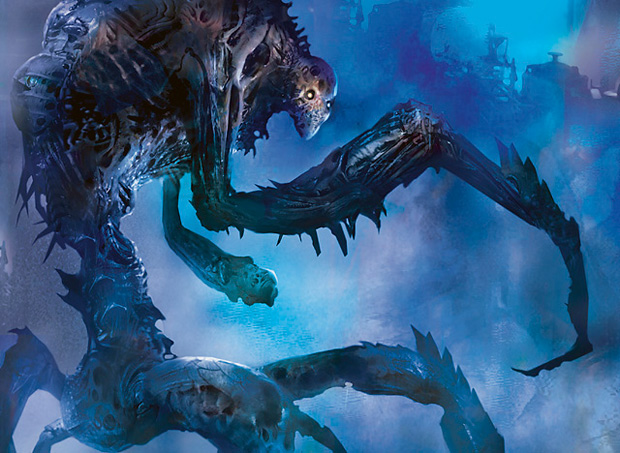 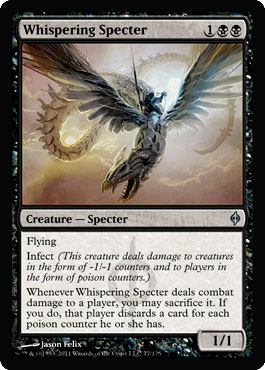 Being able to apply pressure to your opponent in multiple different directions can work to your advantage thanks to some of the new tools that New Phyrexia is going to offer us.

So while you still might not want to aim to draft a fully hybridized infect/non-infect deck once New Phyrexia hits the scene, you should be able to make some good things happen when you end up with some non-infect creatures in your infect deck, or vice-versa.