The Importance of Vision

Posted in Limited Information on November 17, 2009

ome mulligan decisions appear very straightforward, but when you dig beneath the surface you might discover that there is a lot more going on than you had initially anticipated.

If you showed me a hand that consisted of two-five drops, a six-drop, a card that doesn't come online until turn five, and three lands without giving me any additional information, then I would say you should mulligan it. (Unless one of those five-drops was a Wrath of God effect. Then I might be singing a different tune.)

But when you know what the other 33 cards in the deck are, you will be able to make a somewhat informed decision. And once you know something about the contents of your opponent's deck, then you can make an even more informed decision.


You sit down for your first match and you draw a hand that consists of:

Do you keep this hand on the play? How about on the draw?

If you are on the play, and the opponent doesn't have any removal spells (or bounce spells, or significant disruption of that sort) then this draw will probably win on your seventh turn, if you draw three lands by turn six. You'll cast your Territorial Baloth on turn five, cast your Baloth Woodcrasher on turn six, and on turn seven you will enchant your Territorial Baloth with Giantiform, pop your Khalni Heart Expedition, and pummel your opponent for a ton of damage.

Now, as long as you think about the situation concretely, you don't need to be an expert in statistics to understand that those odds aren't in your favor. Remember, you only have five draw steps to get those lands. With only five draws, you would need to draw a land in more than half of your draws. Seeing as your deck contains less than half lands, it is clear that you have a less than 50% chance of having that happen.

However, the math isn't as easy as it might look in situations like this one. Instead of drawing exactly the lands that you need, you might draw a land and a stream of four drops, or you might draw a bunch of lands and get blown out by a single removal spell, or .... 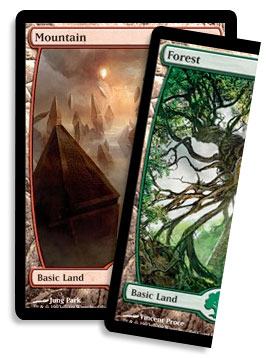 If you can quickly calculate the probabilities of various combinations of draws occurring, then more power to you. But I know that it's outside the scope of my ability to quickly figure out the exact odds that I will draw one of my eight relevant two- or three-drops in my first two draw steps and three lands in my first five draw steps while still focusing on the more important aspect of if whether I would even be a favorite if my draws worked out the way I wanted them to.

Yes, you should look to roughly estimate the likelihood of drawing an early drop, drawing enough lands, or drawing some other combination of cards that will put you into the game, but you should spend just as much time (if not more time) figuring out if that will actually matter.

So while things are looking pretty grim for this hand right now, let's see if we can glean more information from our knowledge about Zendikar Limited and our deck before we commit to a decision.

The Speed of the Format

If I drew this hand in a Magic 2010 draft I would keep it on the play or on the draw. (Of course this hypothetical situation could never come to be, because you can't have Zendikar cards in an M10 draft, but let's suspend our disbelief for a minute.)

The reason why I would keep this hand is that M10 is a relatively slow format. That means I will likely have time to draw out of this situation.

Sure, my opponent might get a lightning-fast draw, even in M10, but those situations would be few and far between. And even if my opponent did have a fast draw, I still might be able to draw out of the situation quickly.

But in Zendikar Limited, the decks tend to be a lot quicker than they are in M10 Limited. That means that I have fewer opportunities to draw out of my situation, and less time for my big spells and creatures to take over. This deck is awkward in Zendikar because it has so many slow spells, so few things to do early, and so many ways to fall behind.

This type of hand is exactly why you should try to draft decks that are faster than this one in Zendikar Limited. You are likely to draw this type of hand, and when you do you are going to find yourself pretty far behind whether you keep or mulligan.

When Is This Best?

Is this hand better on the play or on the draw?

On the play you will have fewer opportunities to draw your necessary lands and desirable early drops, but you will be able to get your spells online earlier. On the draw you will have more draw steps to draw "relevant" cards, but it is less likely that those cards are actually going to be relevant.

On the draw you are simply too likely to get blown out before you do anything competitive to justify keeping this hand. On the play, you might actually get enough time to deploy your expensive spells, so it is reasonable to at least consider keeping this hand.

What Are You Hoping For?

With many decks, I would quickly mulligan this hand. It doesn't have any way to affect the board until turn five, and it needs more lands to cast its spells. Yuck!

But this deck is pretty slow and clunky for a Zendikar draft deck. So you might not be able to consistently draw into a better hand. Sure, you might mulligan into a hand with an early drop, a midgame spell, and some lands, but you are more likely to mulligan into another hand that has about two potentially relevant spells and three lands, which is exactly what you have now.

So why risk it? You could just keep what you have now and know what you're dealing with, rather than run the risk of drawing something absolutely abysmal.

The thing is, you don't lose that much equity if you get a worse hand, whereas you serve to pick up a lot of value if you draw something good. Seeing as you have about the same chance of either drawing a significantly worse hand (in which case you lose only a little bit of value) or drawing a significantly better hand (where you gain a lot of value) it becomes worth it to mulligan this hand.

What I ignored in that last paragraph is that the vast majority of six card hands that you will draw into with this deck will be a little bit worse. And those little bits add up.

Ultimately, I feel that the chance of getting something significantly better far outweighs the chance of giving up a little bit of ground on my starting hand. When you are planning five to six draws ahead, there are so many opportunities for things to change. Sure, you might start out with a slightly worse hand, but you will have much more time to draw expensive, game-breaking spells than you have to draw cheap spells that you can use to keep yourself in the game. That makes it important to have some of those cheap spells in your starting hand. That's also why you typically want to have considerably more cheap spells than expensive, game-breaking spells in your deck.

Time Is of the Essence 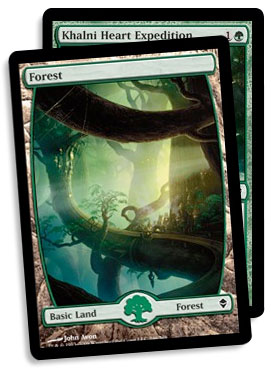 Given unlimited time to make a decision, I think that it is (just barely) right to mulligan this hand on the play against an unknown opponent. On the draw, I would ship it back without needing to give it much thought.

I've come to the decision to mulligan this hand on the play after a lot of thought, and if this deck were just a little bit slower (or the Khalni Heart Expedition were a land) then I would ultimately have decided to keep this hand. But in a real game, where I have a very limited amount of time to make a decision, I would feel obligated to mulligan this hand, play or draw. After intense consideration, it might have turned out that it was marginally better to keep this hand than to mulligan it, but if it were correct it would only be a little bit better. If it were incorrect to mulligan (say this deck actually had a good early game), then it is likely that you would have given yourself a considerably worse chance to win than you would have had if you had simply mulliganed.

If you do have sufficient knowledge (and you are able to process that knowledge quickly enough), then you might find that an otherwise unsavory-looking hand might actually give you a greater chance to win than a six-card hand would. But if you don't have enough knowledge or time to figure out if that unsavory hand might be marginally better than a random six-card hand, then you should throw it back. The chance of making a very bad decision is just too great to justify the risk.

You are in an 8-4 draft on Magic Online. You just took a Trusty Machete out of your first pack, which contained:

What do you take? Why?

Posted in Limited Information on November 17, 2009