An Introduction to Team Sealed Strategy

op players from more than fifty countries will descend upon Gen Con in Indianapolis this week to compete in the World Magic Cup. Players will begin the event on Friday morning by drafting Magic 2013 and will then conclude the day by playing Standard. The teams that do well enough to advance to the second day of play will get to test their mettle at M13 Team Sealed on Saturday morning (after which, they will play Team Constructed until a champion is crowned).

I'm definitely curious to see which Standard, Modern, and Innistrad Block Constructed decks will thrive this weekend, but the part of the World Magic Cup I'm looking forward to the most is, without a doubt, the Team Sealed portion of the event. 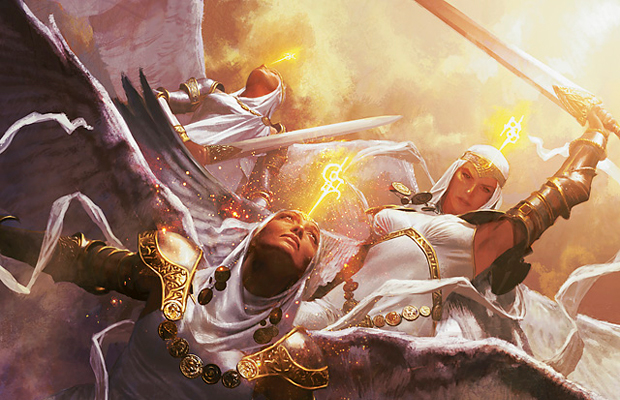 Team Sealed: How Does It Work?

While the World Magic Cup is an elite, invitation-only event, you too can play Team Sealed—all you need to do is track down two friends to play with and a three-player team to compete against. Not only is Team Sealed a lot of fun, but if you're planning on attending Grand Prix San Jose this October, getting some Team Sealed practice in now will be invaluable for you. (Yes, Grand Prix San Jose will be played with Return to Ravnica Booster Packs, but there's still a lot to be learned from building Magic 2013 Team Sealed decks, particularly if you've never played Team Sealed before!)

Of course, if you aren't playing in a tournament, then there's nothing to stop you from playing additional matches against the other members of the opposing team...

After determining seating, each team opens twelve booster packs, from which its members have to build three different forty-card-minimum decks, with their own unique sideboards. Once your team has registered its decks (and its sideboards) you won't be able to make any changes. 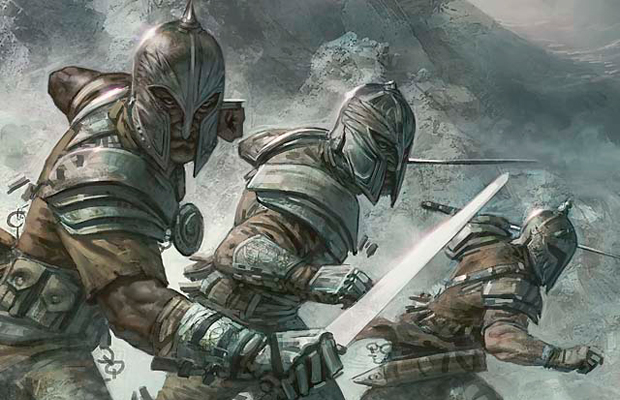 While some individual Sealed pools will have a clear "best deck" that you can build with them, it's very rare that a Team Sealed Pool will have three best decks that are clearly laid out for you.

Consequently, it's very important that your team is able to work together to identify the three decks you think will maximize your team's chances of winning (while each individual match is played best two of three, your team will only win if you win two out of the three individual matches).

Perhaps the most straightforward way to handle a Team Sealed pool is to build three good decks. This balanced approach will give all of the players on your team a strong chance to win their matches.

If you have the pieces to build three good decks, then this can be a very effective technique. But if you don't have enough removal to go around, or you notice that no matter how you slice it, at least one player's deck is going to have some serious flaws—you're going to need to take a different approach. If, after building two top-notch decks, your team's leftover cards are good enough to build a third deck with a real plan, then this could be the way for you to go.

So if you can put together a hyper-aggressive red-green deck with an extremely low curve but negligible late game options, OR a base-white control deck that's exceptional at locking up the ground but has some problems with creatures in the air, OR a mono-black deck that's a bit slow but is very powerful if it has enough time to get going... don't be afraid to shuffle that up.

Yes, the third deck is going to run into some serious trouble from time to time, but if the first two decks are good enough to win consistently, then that shouldn't matter.

However, if the third deck is going to end up being an extremely mediocre pile of cards that is unlikely to beat anyone who isn't suffering from terrible mana problems, then this approach probably isn't going to work very well for you.

If the player on your team who is piloting the completely overpowered deck is able to win most of his or her matches, then that means the other two players will only need to split their matches for your team to rack up victories. 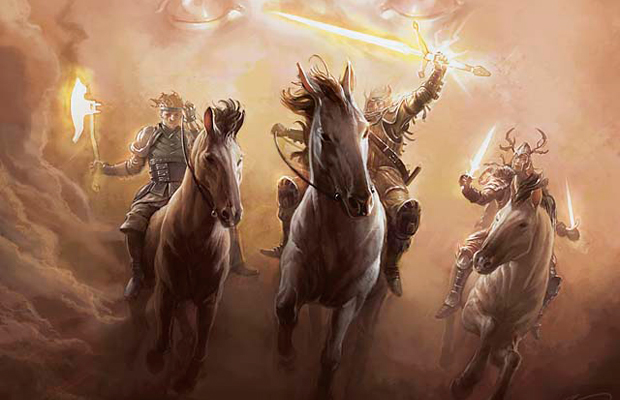 Make Sure Every Deck Has a Plan And an Appropriate Finisher

Just like in individual play, it's absolutely crucial that every Team Sealed deck has a clear plan for how it will earn its victories.

You can't just figure out the sixty-six or seventy-two best cards in your pool, divide them between three players, add lands, and expect to win. Rather, you need to make sure that each deck has a way to win quickly or stay competitive in the face of an early onslaught, and a way to close out games that go long.

But while Volcanic Geyser tends to be at its best in aggressive decks, Nefarox, Overlord of Grixis might play a much more important role in your team's controlling black deck that needs some very good high-end creatures than in your team's white and black exalted deck that is already very capable of presenting a large threat. 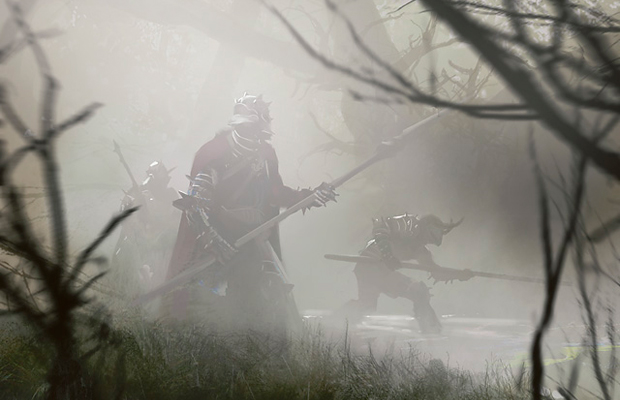 Don't Rely On Creature Enchantments or Other Fragile Combos

When you open twelve packs, there's inevitably going to be a lot of tricks and removal spells running about.... so you shouldn't expect to get away with playing cards like Dark Favor.

Sure, there will be plenty of times in individual drafts where you're able to ride an enchanted Tormented Soul to victory, but in Team Sealed, Dark Favor and Volcanic Strength tend to be far too large of a liability to justify playing.

Of course, Rancor is still a great option—but anytime you set yourself up to get regularly two-for-oned, you're going to be in a lot of trouble.

After sorting your pool by color and setting aside your unplayable cards, your team should determine which of your colors could be split between multiple people. You might find you have a good split of controlling cards and aggressive cards in a single color– in which case it will be very easy for you to share that color between two different decks.

Don't be afraid to leave some "good" cards in your sideboards, particularly if doing so will improve the overall quality of your decks.

Yes, it might feel kind of weird to leave a Wind Drake or a Guardians of Akrasa in your sideboard, but if your blue deck is too controlling for a three-mana 2/2 flier, and your white deck is too aggressive for a three-mana 0/4 that can only boost creatures that attack alone, then you shouldn't fret about your "tough" decision.

Similarly, you might end up being unable to play with Flinthoof Boar or Harbor Bandit because it doesn't make sense for you to build a red-green deck or a blue-black deck. That's okay! A single above-average card shouldn't be enough to completely throw off the way you construct three different forty-card decks. 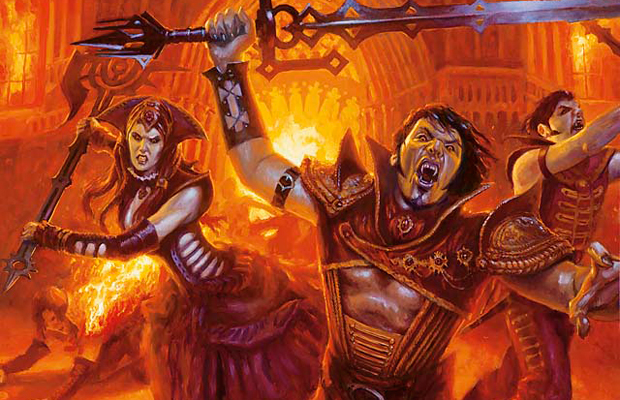 Make Sure Every Deck Has Removal Spells

When you're dividing up your colors, you should make sure that every deck has some relevant removal spells, counterspells, and/or bounce spells.

Even if the tricks themselves aren't great, you need to give every one of your team's decks some good instants and/or removal spells. Of course, everyone will want to get as many removal spells as they possibly can into their decks, but you should keep in mind that there are some serious diminishing returns for each additional removal spell a deck has.

Consequently, if your pool has two Pacifisms, a Murder, an Essence Drain, and a Searing Spear as its only high-end removal spells, you probably won't want to build a black-white deck featuring the two Pacifisms, the Murder, and the Essence Drain. Yes, this deck will be exceptionally good at dealing with problem creatures, but it will also be forced (from time to time) to waste its high-quality removal spells on marginal cards because its hand is flooded with top-notch removal spells.

And while that greedy player is busy using a Murder on a Wind Drake, he or she will inevitably look over while his or he teammates are dying at the hands of Hamletback Goliaths and Harbor Bandits pumped to huge sizes by exalted creatures.

If, instead, you make sure that each player has some decent removal at the ready, then you will be much better off.