It's All in the Timing

Posted in Limited Information on March 17, 2009

ou lost a close Game 1 to your opponent's Jund deck when, after the board was stabilized, he made a bunch of tokens with Necrogenesis that pummeled you and sent you reaching for your sideboard to bring in Relic of Progenitus.

Your opponent opened the game on a Forest, you started with Swamp, Relic of Progenitus. Your opponent then played a Mountain and passed the turn. You know that your opponent has two Jungle Weavers and a Ridge Rannet in his deck (that can help power up his Necrogenesis).

It is your turn two. You have Swamp and Relic of Progenitus in play. You draw for your turn, and your hand consists of:

What do you do on your turn?

Far and away the most common answer in last week's forums was to pass the turn and cycle Viscera Dragger at the end of your opponent's turn.

to cycle as opposed to the

that it costs to sacrifice Relic of Progenitus, so we won't be wasting any mana. To top it off, Relic of Progenitus can severely limit the effectiveness of the otherwise dangerous Necrogenesis that we already know is in our opponent's deck.

But there's a lot more going on than that.

If we cycle our Viscera Dragger first, that means that we are likely going to have to remove it next turn (if we don't draw a blue source) when we sacrifice the Relic of Progenitus.

Assuming we are placed in that scenario, yes, we can unearth the Viscera Dragger first, but that would prevent us from being able to cast the Wretched Banquet in our hand or use one of our Esper Panoramas or Rupture Spires, or even our Crumbling Sanctuary if we draw it. Unearthing in that spot simply isn't worth it given the contents of our deck.

The big argument for cycling Viscera Dragger first is not that it protects your from Necrogenesis (which it does to some extent) but rather, because we have two Rupture Spires and two Esper Panoramas in our deck we would want to be able to leave ourselves the ability to sacrifice our Relic of Progenitus on our next turn and still have the mana available to power up our blue source.

If the deck had an additional Island-fetching panorama or Rupture Spire then I would definitely cycle the Viscera Dragger first, but as it is I think it's more important to maximize our chances to draw a blue source for our next turn.

Not only do we run the risk of removing our un-unearthed Viscera Dragger, but depending on what we draw we might want even want to pay the full

Playing Around Cards When it Doesn't Cost You

Your opponent has a Swamp, a Mountain, and a Forest untapped. You have a bunch of Akrasan Squires, Sighted-Caste Sorcerers and Sigiled Paladins. If you connect with a creature that is attacking alone, it will be lethal. Your opponent has some chump-blockers, but she's otherwise in trouble.

Your hand contains an Aven Squire. Do you play it before combat?

Your opponent could have a Branching Bolt or a Jund Charm or any other sort of cards that could ruin your day. And you don't actually gain anything by playing your flier—your creatures are all lethal anyway.

When Not to Wait

You control a Forest, two Swamps, a Mountain, Shambling Remains, and Pestilent Kathari. Your lands are all untapped. In your hand are three cards: Soul's Fire, Jund Charm, and Cavern Thoctar.

Your opponent's board consists of two Islands, two Swamps, a Mountain, and Dreg Reaver. His lands are all tapped, and he has four cards in hand.

Well, the correct play is to cast Jund Charm at the end of your opponent's turn and give your Shambling Remains two +1/+1 counters. On your turn you attack with your two creatures and either your opponent chump-blocks your 6/5 Shambling Remains with his Dreg Reavers, or he takes 7 and dies to your Soul's Fire.

If you don't cast the Jund Charm to pump up your 4/3 at the end of his turn, you're going to have to use it on your turn when the Dreg Reavers blocks your Shambling Remains and you won't have the mana to do much else.

This example is a result of a mistake that I made that cost me a match. I'm normally very aware of this type of play, but for some reason I completely blanked on it this time.

The very moment I untapped for my turn I realized the opportunity that I had missed. Unfortunately, it was too late for me to do anything about it. I drew a Nyxathid, attacked with both of my creatures, pumped Shambling Remains when he blocked with Dreg Reaver, and passed the turn because I didn't have the mana to cast my freshly drawn guy. I was way ahead at this point, but I wound up losing the game to two Cruel Ultimatums that my opponent never should have had the time to cast.

I could go on for a long time about how bad this mistake was, but ultimately it happened because I went on autopilot. I had a trick that could make combat awesome for me, so I wanted to cast it after damage was already on the stack.

If I had thought critically about the situation I would have seen what I had to do. I didn't think critically, and I didn't see it.

Don't Let Your Mistakes Cause You Further Harm 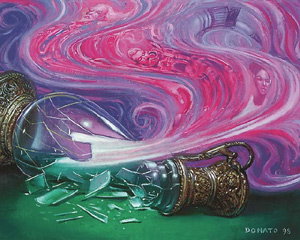 Pretty much everyone has accidentally played an exalted creature after they attacked with one creature. This type of mistake happens. We become conditioned to making certain plays at certain times (we play our creatures after combat, our instants at the end of our opponent's turn, etc.).

Realizing that you made a mistake and then playing correctly after that means that you are playing well, but you did something wrong. Sure, that mistake can be costly, but it won't be anywhere near as costly as it would be if you had continued down a road of incorrect play.

It's impossible not to slip up from time to time and miss out on opportunities to play things at unintuitive times. But if you keep your eyes open and think about your cards in terms of what they are doing for you this game, instead of what does this card normally does, then you're going to find yourself on your way to some very well-played games of Magic.

The End of Your Opponent's Turn ...

... isn't always the right time to do things.

When you are actively digging for a card (that you can play that turn if you draw it), then it will often be right to play your cyclers/card drawers on your own turn instead of your opponent's turn.

Interestingly enough, the reason why we try to dig for cards on our own turn stems from the same reason that it is generally correct to cast your spells at the end of your opponent's turn. You always want to wait until the last possible moment that you can do something and still get the desired effect or the maximum impact from it.

When mana isn't an issue, you don't have to use your removal spell at the end of your opponent's turn, even if you are 95% sure that you will end up killing that creature when you untap. If you're worried about a counterspell or a pump spell, that can also change when you want to play your spells.

If you have a burn spell that you are going to use on a creature, and you are worried that your opponent might have a pump spell to save it, then you might want to cast your burn spell on your turn so they can't deal you additional damage with the pump spell.

There's a lot more going on here than just the little that I've touched on here, so I'll definitely come back to this idea soon.

No Bonus Exercise This Week...

But join us next week for the return of the draft walkthrough!

Posted in Limited Information on March 17, 2009