A Launchpad for M12 Limited

This past weekend I played in the Magic 2012 Prerelease at Jim Hanley's Universe in Manhattan. Jim Hanley's Universe has been a popular NYC comic book store for as long as I've been alive, and in the past year or so they've begun seriously ramping up their tournament support. They run Booster Draft every Thursday, Friday, and Saturday, as well as Standard and Commander tournaments on Thursdays. If you're looking to drop by Hanley's for the first time, Thursday is definitely the day to do it, as there are always a bunch of people there to game with.

The Sealed flight that I played in started at 2 p.m., which was kind of a fun change of pace for me as I'm used to playing in tournaments that start at 9 or 10 a.m. So instead of picking up a breakfast sandwich en route to the tournament, I had enough time to eat brunch (ricotta and caramelized pancakes—yum!), and watch a matinee movie before I sat down for an afternoon of Magic.

After enjoying my lazy Saturday morning, I opened up my six M12 Booster packs and I was greeted with the following pool:

I quickly discarded my green as a base color as it contained a grand total of two creatures. Then I set aside my white as it seemed like it was just strictly worse than my black and my red.

Once I had ruled out my green and my white, I was left with just my blue, black, and red cards to build my deck from.

I was initially drawn to blue. I had a lot of good ways to dig, some solid counterspells, a Mind Control, and an Æther Adept. Unfortunately, I only had four playable creatures in blue (five if you count Mind Control), the biggest of which is a 2/2. I tried pairing my blue with my red, and then my black, but it was quickly apparent that those decks weren't going to be good enough as they contained a mish-mash of good control and beatdown cards that didn't work particularly well together.

I tried massaging things a bit to see if I could build a decent green-blue-black or blue-black-red control deck, but it was clear that I was going to have a lot of trouble beating something as unassuming as a Bonebreaker Giant—and that simply isn't a weakness that I ever want to settle for. 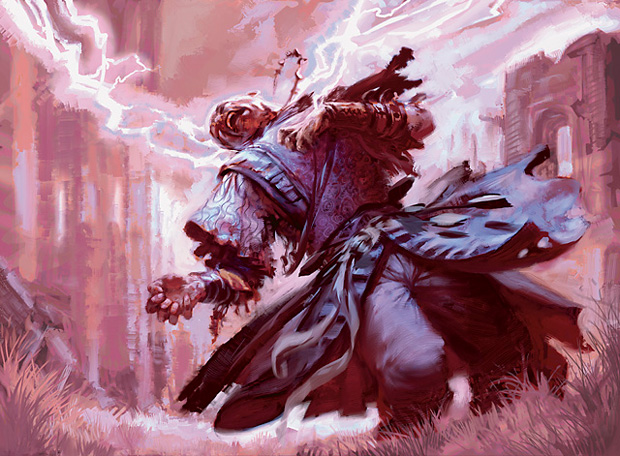 So I took a look at what kind of a Black-Red beatdown deck I could build. Before I actually laid the deck out, I was concerned that it might not be good enough because I only had a single two-mana creature, a Duskhunter Bat. However, I had three Shocks, so...

Once I actually laid out my black-red beatdown deck, I knew I had something really good on my hands. While my deck certainly would have been stronger with the addition of a Goblin Piker or two (and in case you were wondering, yes, that felt as weird for me to write as it probably was for you to read), I still had an extremely strong set of cheap creatures and a ton of solid removal spells.

(Brief aside: I initially had Taste of Blood in my main deck. Then I took a moment to actually read the card. I had assumed that Taste of Blood could deal damage to creatures or players, but it turns out I was wrong. If I hadn't taken a moment to reread that card, I would have gotten a nasty surprise later on.

The moral of this story? Make sure you completely read all of your cards, especially when a set is new, or else you might end up playing Taste of Blood...)

I usually try to play 17 or 18 lands and choose to draw first in Sealed deck, but there was no way that I was going to do that with this deck.

Last week I suggested that you would usually want to hold your removal in Sealed until your opponent cast a creature that you absolutely needed to deal with. This deck was definitely an exception to that rule.

I used my removal spells to develop an immediate advantage. I knew that the overall power level of my opponents' decks would likely be much greater than mine, and I was completely okay with that—because I also knew my opponents probably wouldn't be able to catch up if I played an unblockable damage source on turn one, and then spent my next couple of turns playing (enhanced) bloodthirst creatures and removal spells.

I was fortunate enough to open three Shocks, which allowed me to get a serious jump on most of my opponents, as I wouldn't even need to miss a beat to cast my removal spells. If my Shocks had been three- or four-mana removal spells, then it would have been significantly more difficult for my deck to get off to big leads on the board.

On Goblin Fireslinger and Tormented Soul

Is a one-mana creature that can reliably deal 1 damage a turn worth playing?

If you have a lot of cards with bloodthirst, then definitely. If you start the game off with a Goblin Fireslinger into a Blood Ogre or a Tormented Soul into a Duskhunter Bat and you have any sort of removal to back it up, then your opponent is going to take a ton of damage very quickly. And even if your opponent is able to hold back your onslaught, you'll still be able to peck away at your opponent with your Goblin Fireslinger and/or Tormented Soul, eventually forcing your opponent to either use a removal spell on your lowly one-drop or die from all those scratches. 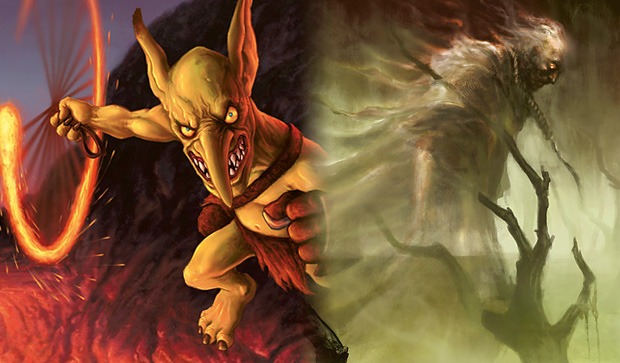 While I haven't had the chance to draft Magic 2012 yet, I suspect that Goblin Fireslinger and Tormented Soul are both going to be pretty high picks for players looking to draft aggressive bloodthirst decks.

Don't Let Yourself Get Blown Out If You Don't Have To

I added Dark Favor to my deck, and I imagined myself putting it on a Tormented Soul on turn two and then taking huge chunks out of my opponent's life total with my unblockable 4/2. But it didn't actually play out that way.

When I actually had the chance to put a Dark Favor on my Tormented Soul on turn two, it would have been terrible to do so. My opponents all had access to some good cheap removal like Shock, Wring Flesh, or Ice Cage, or at the very least to bounce spells like Unsummon. So while I might have been able to steal some games if my opponent didn't have any answers (which was both highly unlikely and probably meant that I was going to win anyway, because... well, my opponent didn't have any answers) it was far more profitable for me to wait until I was in positions where I could definitely get value out of my Dark Favor. 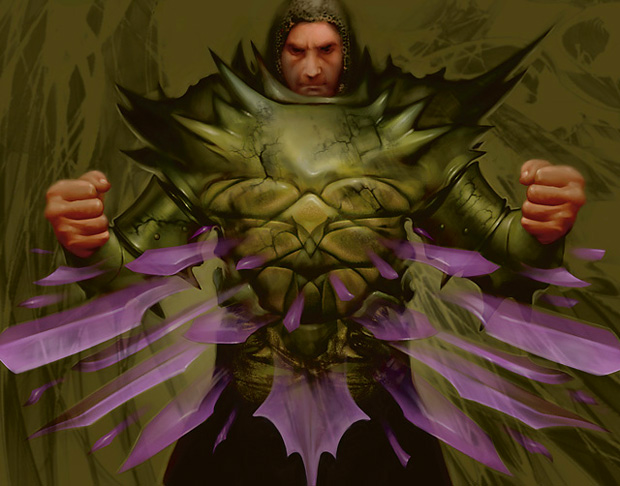 So instead of casting it on turn two (and setting myself up to get blown out) I wound up using my Dark Favor to go over the top in situations where my opponent thought that he or she had a good block lined up. No, your 4/4 won't be able to trade with my 3/3 first striking Blood Ogre which is now a 6/4; instead you're going to have to chump block or lose a huge chunk of your life total. I also used it to deal with conditional removal spells at a big profit. Nice Ice Cage—I'll make my Sengir Vampire a 7/5, melting your Ice Cage in the process). 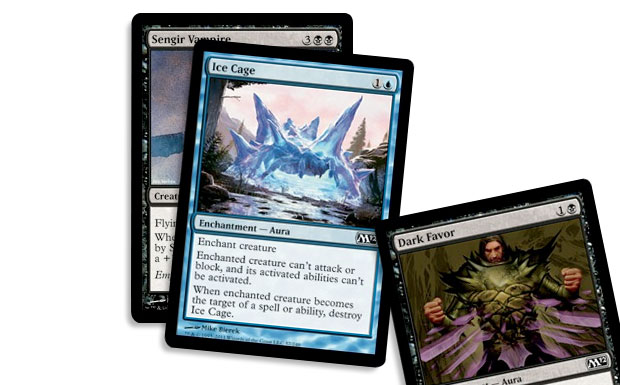 Yes, it's tempting to use cards like Dark Favor early, but if you don't wait until your opponent has used his or her cheap removal spells, then you're just going to set yourself up to get two-for-oned.

If you are able to connect for 4 damage and then trade your Lightning Elemental for a creature or a removal spell, then it will have been more than worth the price of admission. Similarly, if your opponent has to block and trade a Sengir Vampire, a Bonebreaker Giant, or a Giant Spider for your Lightning Elemental, then you're still getting a lot of bang for your buck. 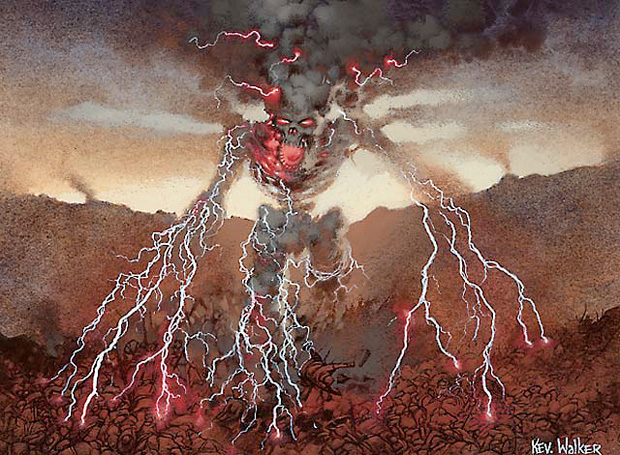 The problem with Lightning Elemental is that your opponent will frequently be able to answer it with something that costs a fraction of the mana that you spent on your 4/1 haste creature. A lot of Lightning Elementals are going to die at the hands of Wring Flesh or trade in combat with unassuming 2/1s.

I'm a fan of main-decking Deathmark in most decks and formats where it's legal. The bulk of the really big and scary creatures in M12 are green or white. As a result, Celestial Purge doesn't have quite the same main-deck appeal as the black sorcery does.

Additionally, I figured that my deck would be naturally advantaged against non-green decks anyway, so while I would certainly miss having a third Lightning Elemental in my deck against blue-black foes, I'd probably have a very good chance to win the first game (when my opponent's deck was probably configured to beat slower strategies) even if I drew a blank Deathmark—whereas if I drew my Deathmark against a big green deck, it could do a ton to swing the game in my favor.

And don't think that you can just blindly apply all the things that you learned about M11 Limited to M12 Limited. For example, this format seems to be a good deal faster than last year's core set.

A lot of my opponents assumed that M12 Sealed would be dominated by controlling strategies, so they built decks that were particularly strong in the late game. Consequently, the bulk of my opponents had decks that were way too slow to compete with mine, even when they got good draws. Anytime I played against an opponent who missed a land drop, had some color problems, or otherwise stumbled, I was able to end things pretty quickly.

I haven't seen a ton of M12 Sealed pools yet, but I do know that I'm going to check to see if the pool that I open at next weekend's M12 Launch Party has the cards to support an aggressive strategy, and I would recommend that you do the same. Even if you do ultimately end up building a top-notch blue-black control deck, it's worth it to see if you have the cards to put together red-green beatdown instead.