he artifact-rich world of Mirrodin forces players to adapt in interesting ways. It isn't difficult to get enough playable cards, but you need to make sure that your deck actually does interesting/powerful enough things for it to be able to win consistently.

Heck, you could be drafting in between two players who are in the exact same two colors that you are in and still get to 22 or 23 playable cards without breaking much of a sweat. 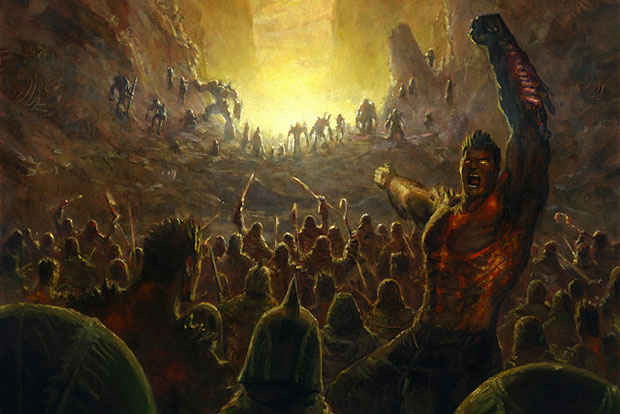 The problem that you will typically run into when sandwiched by players in the same colors as you is that you won't get passed many great cards. If one of your neighbors opens or gets passed an amazing bomb in your colors, there's almost no chance that it will get passed to you (there would have to be an even better on-color bomb or, in a draft where the post-draft ownership of cards is being taken into consideration, a high-profile Constructed rare). If a really good card in your color(s) makes its way around the table, it probably won't end up in your deck either, because one of your neighbors will snatch it up.

So even though you will, most likely, be able to put together a deck full of reasonable cards when sandwiched between like-colored players, you will probably have some difficulty winning unless you opened a couple of top-notch cards, or you were able to put together a particularly synergistic deck out of cards that typically don't get that much respect.

So how do you take advantage of the fact that Scars of Mirrodin block—like Mirrodin block before it—is chock-full of playable colorless cards to turn potentially poor situations around?

When you don't have to fight tooth and nail to end up with enough playable cards, you don't have to stay in a color just because you have a couple of cards in it. This is true in pretty much every format, but it is particularly true in the world of Mirrodin.

Don't feel like you are married to a color just because the first two cards you took were in that color. If you started off your draft with a Spread the Sickness and a Virulent Wound, but then you get cut off on black, you could very easily end up playing a green-red or white-blue deck that splashes black for just the Spread the Sickness (with the Virulent Wound being a necessary casualty, only coming in when you need additional ways to deal with serious problem cards like Embersmith).

If you notice that you are getting passed good blue cards, and then some good white cards, just take them! You might end up with a white-blue deck splashing black, or you might end up with a black-blue deck that eschews the white cards you were picking up in the middle of pack one entirely—either way, you maximize your chances of being able to put a bomb that you open or get passed in a subsequent pack to good use, or to pick up a bunch of really good cards throughout the draft in an underdrafted color.

If you were to spend the draft blindly picking the best card in whatever color(s) you started your draft off in, you would not be able to take advantage of the information that the player(s) to your right are attempting to communicate to you. (You probably know how frustrating it is when you go out of your way to cut off a color in anticipation of getting really good cards in that color in the second pack, only for the player on your left to stay in that color and reap the rewards of your hard work in the second pack but ultimately sabotage both of your decks because of his or her inability to cooperate.)

There are certainly times when it is correct to stay on the path dictated by your first couple of picks—I'll get to that in a minute—but simply having a good card or two is not a sufficient reason to draft stubbornly. If you stay flexible, you will have no problem picking up enough playables, a few good cards, and probably a great card or two, all in an underdrafted color.

A card like Red Sun's Zenith (and, to a slightly lesser extent, something like Spread the Sickness) is pretty darn easy to splash. Even if you don't have any fixing, you can just add two Mountains and call it a day. 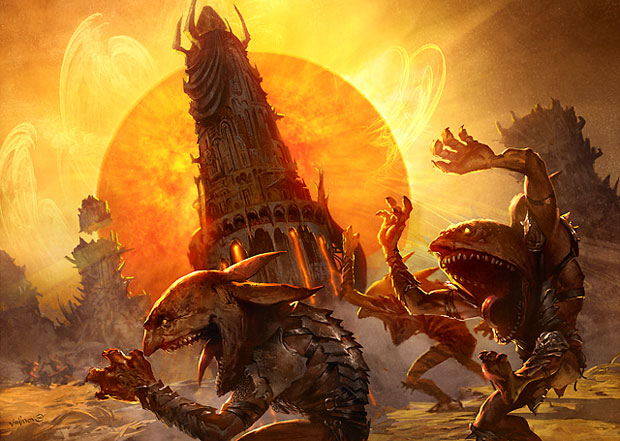 While it goes without saying that cards like White Sun's Zenith, Massacre Wurm, True Conviction, Kuldotha Phoenix, and Volition Reins require pretty intense color commitments, some of these cards are powerful enough for you to seriously warp the rest of your decisions around them. While I wouldn't go that far out of my way to play a True Conviction or a Kuldotha Phoenix, I would be willing to jump through some serious hoops to get a Massacre Wurm into my starting 40. 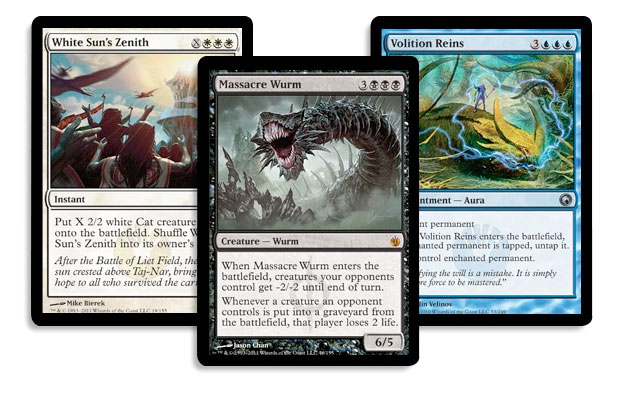 So let's say that instead of starting the draft with Spread the Sickness and Virulent Wound your first two picks are Massacre Wurm and Virulent Wound, and then you get cut on black. You won't be able to splash for the triple-black Wurm in your green-blue or white-red deck in the same way that you would be able to easily splash Spread the Sickness—unless you happen to have a disgusting amount of mana-fixing, and even then you'd be pushing it—but that doesn't mean you should be shut off to the idea of playing the game-ending 6/5 Massacre Wurm.

If you are able to identify an underdrafted color early, then you should have no problem getting 18+ playable cards between that color and artifacts. That means that it is completely reasonable for you to play a second color for only a couple of cards—and even if your only real reason for playing that color is one superb card such as Massacre Wurm, if the rest of your cards are still decent, then it is quite possible that that single devastating and potentially game-ending card can offer you more upside than even a few really good cards in a different color.

In the world of Mirrodin, your second color can consist of three or four cards.

And while I wouldn't go too far out of my way to warp my deck for something like Kuldotha Phoenix, if it turned out that I could run my three red cards (including the Phoenix) as my second color – then I would not hesitate to do so.

Further, even if you don't already have that superb bomb in your deck, if you realize that you are picking up a ton of artifacts and/or cards in a specific color, then you can easily wait to commit to a second color until you get well into the second—or even third—pack. Sure it will be worth it for you to dabble in another or even a couple of other colors, especially if you get passed something nice, but you should still leave yourself open to the possibility of switching colors in a dramatic way if you happen to open or get passed something really special.

What Am I Doing?

When you are drafting Mirrodin Besieged / Scars of Mirrodin Limited, you should constantly ask yourself what main color(s) you're focusing on.

If you have a bunch of artifacts, you might not even know what colors you are playing until deck building. Of course you want to know what colors you are in as early as possible so you can draft accordingly, but there are going to be times when you just won't know until after you've had the chance to fiddle around with a number of different configurations. This happened to me a number of times when I had played with Mirrodin Besieged enough to be familiar with the cards, but not enough to know how to evaluate many of them properly.

So while 19 artifacts and cards in a single color plus 3-4 cards in a second color is a pretty easy path to follow, it is just as easy to have 10-15 artifacts and 5-6 cards in each of three different colors. If you have just four cards in each of three different colors going into the third pack, you will be able to give yourself a few more opportunities to get something fantastic that will really pull your deck together.

Of course, if given the choice, I would like to be able to quickly recognize what color(s) are being underdrafted and then promptly reap the rewards. But if I'm getting unclear signals and I feel myself getting pulled in a couple of different directions, then I will have no problem waiting until the eleventh hour to decide what colors I am playing.

Splashing a completely off-colored card can be a real burden at times. Sure, you might need that extra removal spell, but if you don't draw your Mountain for a long time while that Burn the Impure rots away in your hand, you are going to be pretty frustrated.

This is why cards like Sylvok Replica make great, low-impact splashes. 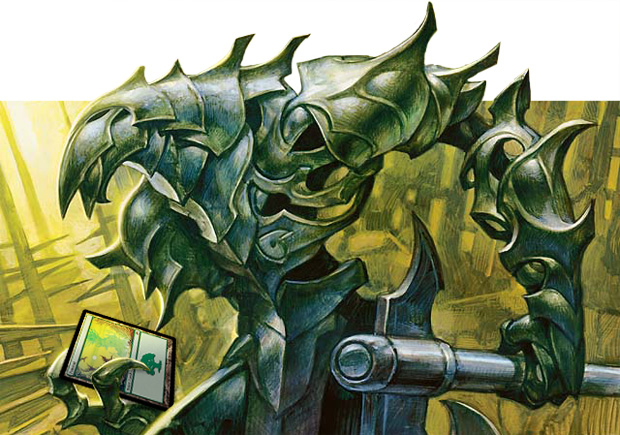 If you are playing a deck that doesn't have a lot of colored mana requirements, it will often be in your best interest to put a single Forest in your deck to allow you to activate your Sylvok Replica, even with no other green cards. If you are already running a Morbid Plunder which would allow you to get multiple activations out of your Replica and/or an off-color Horizon Spellbomb, then you should almost certainly make room for that Forest, provided it won't hurt you too much. (If you're already trying to fit Leonin Skyhunter and Volition Reins into the same deck, then you might not want to try squeezing in that off-colored land.)

Even if you don't draw the Forest, at least you'll still have a marginal creature. And if you do draw the Forest and the Sylvok Replica together, you'll have a top-notch piece of removal at the ready.