spent the last two weekends doing coverage at Pro Tour Nagoya and Grand Prix Kansas City. In addition to racking up a lot of frequent flier miles, and putting on a couple of pounds from all the sushi, tonkatsu (breaded, deep fried pork), and BBQ that I ate, I got to learn a lot about New Phyrexia Limited by watching the best players in the world duke it out in two of the most important Limited tournaments of the year.

Want to know the most interesting things that I learned in Kansas City? Then read on!

For many years the conventional wisdom was that you should pretty much always choose to play first in Limited.

Sure, there were rare exceptions, like when a player was playing an extremely slow control mirror and just cared about hitting land drops, or when a player had a three-color deck with little fixing that needed to draw all three of its colors to even have a shot of being competitive, or when someone had a deck that was full to the brim with removal spells and defensive cards that looked to win by slow attrition. But even then players would often choose to play first.

Was this always correct? Probably not—but that didn't stop people from making the choice almost automatically. Over time players have become more aware of the fact that you can gain an advantage by choosing to draw first in Limited. If you think that the game is going to go long, or that only a couple of cards really matter in a matchup, then you should at least consider drawing first.

Instead of compulsively choosing to play first, the pro community seems to have decided that drawing first is the default in New Phyrexia / Mirrodin Besieged / Scars of Mirrodin Sealed Deck, and always on the table in Draft. 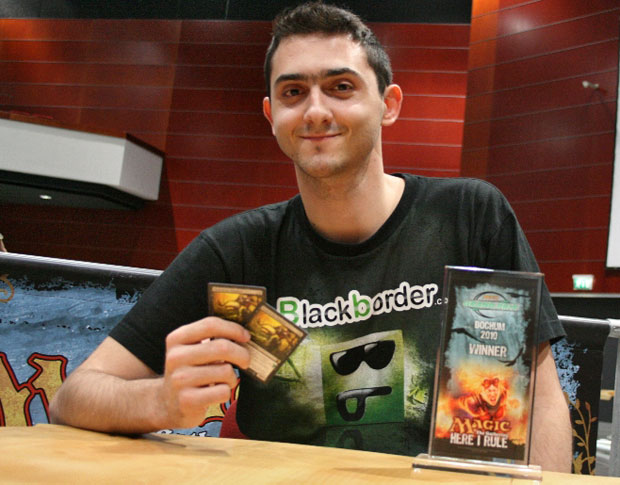 While I was in Kansas City, I had the opportunity to sit down with world-renowned Limited expert Martin Juza to ask him how he wants to start his games. When asked if he generally chooses to play or draw in Sealed Deck, Juza confidently explained that he would almost always choose to draw first.

"In my opinion, it doesn't even matter what your Sealed Deck looks like," said Juza. "You should just draw every time. Most of the games go long and are ultimately decided by bombs, so you want to make sure that you draw your bombs as well as ways to deal with your opponent's best cards. The extra card is definitely worth more than that couple of extra damage you might deal by going first."

I then asked Juza if he could imagine any scenarios where he would choose to play first. He thought about this for a moment and came up with two different sets of circumstances that would induce him to play first in New Phyrexia / Mirrodin Besieged / Scars of Mirrodin Sealed.

First: "When after Game 1 I realize that my deck is much worse than my opponent's and my only chance to win is by beating him before he can play one of his many bombs. The longer the game goes, the more likely he is to draw and play them, so I want to make sure that doesn't happen. Even if I don't have that great of a chance of winning this way, it's better than nothing."

Second: "If my pool is really bad and I have to build a very aggressive deck (like a draft-looking red-white metalcraft deck) I will choose to play first. This type of deck hardly ever works in Sealed, but sometimes you just don't have any other choice. You just have to hope you will be fast enough and rely on cards like Concussive Bolt to deal the last few points of damage. It's basically the same as the first scenario, but you know where you're at before the match even starts."

While Juza felt very strongly about drawing first in Sealed, he didn't have the same amount of conviction about playing versus drawing in Booster Draft:

"That I think varies a lot depending on your deck. Generally speaking, if I'm playing Infect or an aggressive white deck with fliers and Equipment, I want to play first and put my opponent under pressure. If I have a slow control deck with a lot of removal, or if I'm sure that the match will go long and speed isn't all that relevant, then I definitely want to start with an extra card."

For most pros, the go-to strategy in New Phyrexia Booster drafts seems to be to take colorless or Phyrexian-mana cards with your first few picks, at least unless you open (or get passed) a bomb or a top-notch removal spell. Once you get a strong signal that a color is open, then you can move into it, but it'll take something pretty big for most top players to go anywhere beyond that. 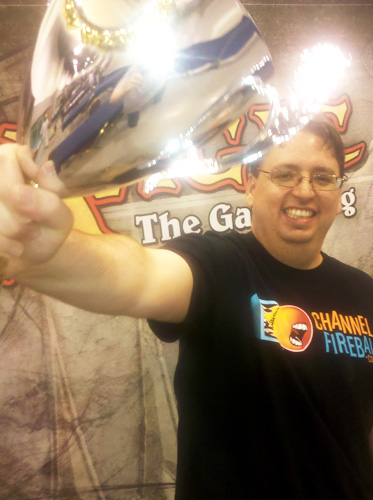 During an interview with Brian David-Marshall, Luis Scott-Vargas explained that he doesn't want to commit to a second color during New Phyrexia because "You want to be one color when you open your next pack if you can. Cards like Corrupted Conscience and Kuldotha Flamefiend are so good."

However, if you wait around too long to pick that second color, some very bad things can happen to you. At a certain point you need to commit to a strategy, or at the very least put yourself in a situation where you can take advantage of the fact that an archetype is open. If you wait the entire draft for something to fall into your lap, you can end up sorely disappointed.

During his second draft pod at Grand Prix Kansas City, Luis Scott-Vargas took an early Shriek Raptor, and then opted for a Spined Thopter over Reaper of Sheoldred despite the fact that Scott-Vargas believes that "Spined Thopter is much worse than Reaper."

Scott-Vargas wanted to keep his options open for as long as possible, but rather than get rewarded for his flexibility, he got punished for his unwillingness to take a stand.

"I stayed open for the entire draft for no reason and then I didn't get passed a single Necropede or Cystbearer," he groaned about pack three. "Ichorclaw Myr or even an Arrest would have been fine. I am playing five cards from Scars, and they are not even very good cards."

Scott-Vargas managed to 2-1 the pod and squeak into 8th place at the end of the Swiss, ultimately winning the tournament with a blue-black evasion deck.

While this story did have a happy ending for Scott-Vargas, it's worth it to take a step back and realize that you can reap some serious benefits by drafting somewhat bullishly when you are surrounded by players who are drafting passively. Had Scott-Vargas taken the Reaper of Sheoldred, but still been willing to abandon it (or his Shriek Raptor) if he realized that one of his colors wasn't open to him, then it is likely that his draft would have turned out a lot better.

While there's certainly a lot to be said for keeping yourself open, be careful not to take it too far... or else you might end up with a bunch of mediocre cards that make up a barely coherent deck.

The Power of Pith Driller

When I opened up a Pith Driller in my first New Phyrexia draft I didn't think much of it. Don't get me wrong—I knew that it was obviously a good card—but there were maybe a half dozen other cards in the pack that seemed more impressive to me. 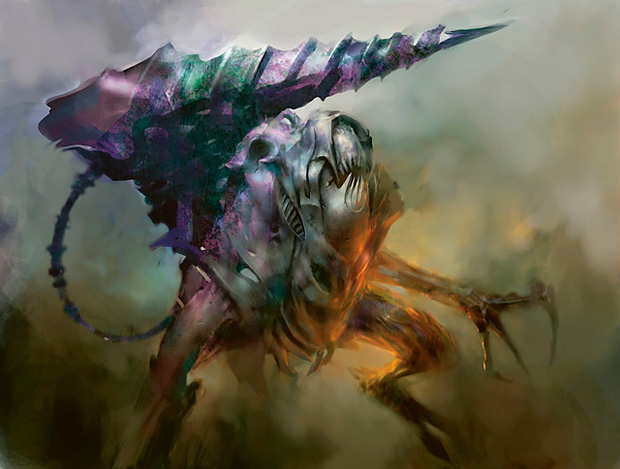 I wound up first picking a Thundering Tanadon out of the pack, and I didn't even think about the pick until weeks later. After all, Thundering Tanadon is a 5/4 trampler that you can play on turn three with a mana Myr. What's not to love?

Now that the format has matured, I've fallen out of love with Thundering Tanadon. I still like the card more than most, but I'm no longer jumping to first-pick it (and in fact I will often leave it in my sideboard if I'm not playing green).

Pith Driller, on the other hand, has revealed itself to be one of the top commons in the set, and is now spoken of in the same breath as top notch removal spells such as Volt Charge.

The Rise of White and Blue Infect

Luis Scott-Vargas and Yuuya Watanabe—the two finalists from Grand Prix Kansas City—have both found great success drafting white and blue infect decks. While these pros rarely pair blue and white together, they are more than happy to pair either of these colors with green or black. 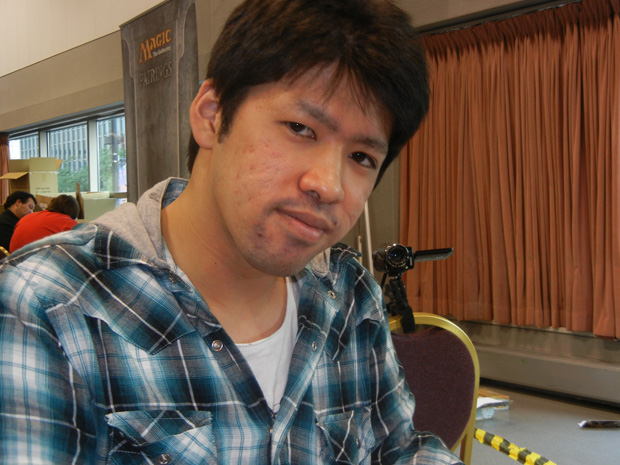 Needing a 3-0 to make it to the Top 8, Yuuya Watanabe dismantled his second draft pod with a blue-black infect deck that abused Blighted Agent and proliferate.

While there might not be any blue infect creatures in Mirrodin Besieged or Scars of Mirrodin, there are a lot of very good blue support cards, such as Quicksilver Geyser and Thrummingbird, that tend to go way later than they probably should. Additionally, the ability to put a Copper Carapace on a Blighted Agent can allow you to win a good percentage of your games before your opponent has the chance to do anything.

While Watanabe has successfully managed to rack up the wins with blue infectors, Scott-Vargas has revealed a preference for white infect. He even went so far as to take a Shriek Raptor fourth pick while drafting to make Top 8 at Grand Prix Kansas City, citing the card's effectiveness in infect and non-infect decks alike.

And if you're getting Shriek Raptors and Lost Leonins late, then you can be pretty confident that you'll also be able to pick up whatever Tine Shrikes and Priests of Norn get opened at your table. If you're able to supplement them with some good infect creatures in another color (it doesn't even really matter which color), then you should be able to rack up quite a few wins.