fter sixteen rounds of play in Standard and Booster Draft (all of which were covered in text and live streaming video), Pro Tour Dark Ascension culminated with a star-studded Top 8 including nine-time Pro Tour Top 8 competitor Paulo Vitor Damo da Rosa and Hall of Famers Jon Finkel (who recently made a commitment to go to every Pro Tour for the foreseeable future), eventual champion Brian Kibler, and Jelger Wiegersma.

Now, I realize this is a column about Limited, so I'll dive into talking about the lessons I learned while doing coverage at Pro Tour Dark Ascension in just a second—but if you haven't already seen it, you should make sure to watch the semifinals match between Brian Kibler and Jon Finkel.

I might be a bit biased because I got to watch the match unfold from the best seat in the house (the coverage reporter's chair a few inches away from the match itself)—but I'm ready to nominate this match as my pick for the best match of all time.

Red-Green Werewolves, white-black, blue-red, and black-red have stood out as the archetypes that improved the most since the release of Dark Ascension.

I provided a brief explanation as to why these archetypes have improved, as well as sample lists for each of them during the coverage for Pro Tour Dark Ascension.

But given that the Dark Ascension/Innistrad Draft format is still in its infancy, there's still a lot of room for improvement of our understanding of how these decks should be drafted and built.

Thanks to having access to a bunch of good removal and tempo spells, black-red and blue-red decks seemed to be effective in either aggressive or controlling forms, depending on what cards players were able to pick up. The other emerging color pairs (red-green and white-black) didn't appear to have quite that same level of flexibility.

This past weekend, it seemed like Red-Green Werewolf decks were at their best when they were able to get off to extremely aggressive starts with cards like Hinterland Hermit and Gatstaf Shepherd. These cheap werewolves are made better when used in conjunction with cards that work explicitly well with them, like Moonmist, Immerwolf, and Full Moon's Rise (all of which are capable of devastating even well-prepared opponents). But even if you don't get any of the werewolf enablers, your quick creatures can be used to ultimately set up big finishing blows with cards like Wild Hunger, Markov Warlord, or even Nightbird's Clutches.

While Red-Green Werewolf decks need a bit of speed to get them past prepared foes, I've seen players find a ton of success with relatively slow, controlling white-black decks able to fly to victory after neutralizing or killing all of their opponents' best threats.

Will these trends continue as people develop a more mature understanding of the format?

I don't know. It certainly seems like it's possible to build good aggressive white-black decks. That few players found success with that style of deck at Pro Tour Dark Ascension leads me to think it might be a bit more difficult to find the pieces for the deck than I currently imagine. 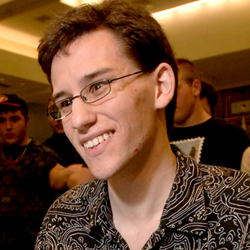 Samuel Black had his back against the wall after starting the tournament 0–3, but after winning his next two matches in Standard, he gave himself a chance to advance to Day Two if he 3–0ed his first Draft pod.

From this point, Sam was free to go in one of any number of directions.

He could have drafted an aggressive green-white deck if he found himself getting passed a bunch of Travel Preparations or Chapel Geists, a multicolored control deck fueled by his two Dawntreader Elks (and whatever other fixing he could grab during the rest of the draft), or maybe draft a green-blue deck of some sort...

Given the abundant amount of foreshadowing I've already done, you probably already guessed that Sam drafted a green-blue deck that he ultimately 3–0ed his draft pod with.

Well, if that's your guess, then you are correct!

1 Gnaw to the Bone 1 Think Twice


A few months ago, Sam was one of the first people who found success with dedicated Green-Blue Mill Yourself decks. The strategy is to dump cards from the library into the graveyard as quickly as possible with cards like Dream Twist, Armored Skaab, and Mulch. As much as Sam used to (and presumably still does) like the deck, he didn't get the chance to completely commit to that archetype this weekend.

Even though Sam had a Spider Spawning and a Gnaw to the Bone that would reward him for aggressively milling himself, he just didn't have the other pieces that would allow him to pull it off.

Instead, Sam wound up putting together a green-blue concoction capable of winning in a lot of different ways.

Sam could come out quick with some of his many two-drops, then fly to victory with his Moon Herons. He could stall the game out early and gradually eat away at his opponent's side of the board with a Wolfhunter's Quiver. Or if the game went long, and Sam's opponent was doing a good job of attritioning away his threats, he could win with a big Spider Spawning.

I'm not sure how good green-blue decks will turn out to be in Dark Ascension Limited, but I do know I'm going to try drafting the color pair in a lot of different ways in the coming months.

I'll be back next week with a more in-depth look at the Draft archetypes in Dark Ascension, but before I go, I wanted to share a couple of the more interesting (monocolored!) draft decks I got to witness this past weekend.

It's often a good move to stay in one color throughout the first pack of a draft, particularly if you haven't been given a good reason to dip into any additional colors. When you do this, you'll be able to take any bombs you might open or get passed in pack two without having to worry about jettisoning any of your earlier picks in order to make your deck work.

But sometimes you'll get through the entirety of your second pack as well without having any reason to move into a new color.

If that happens, you'll have the freedom to move in on any good removal spells, or bombs, that might make their way to you in pack three—and you won't even have to feel the slightest twinge of regret about it.

But every once in a blue moon, your last pack won't give you a good reason to deviate from your main color either, and you'll find yourself with a monocolored Draft deck. 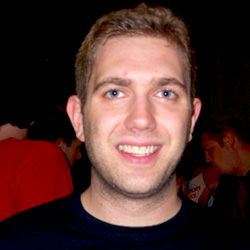 I didn't get a chance to watch Paul Mackinnon draft his deck, so I can only imagine what sequence of picks led him to end up with a mono-blue deck... but I do know that Paul was able to cruise to a 3-0 record with it!

1 Back from the Brink 1 Sensory Deprivation

1 Back from the Brink
23 Cards

1 Lost in the Woods
1 Cards 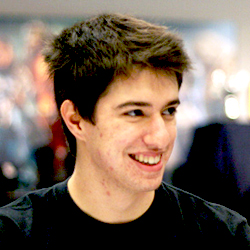 A lot of decks are said to revolve around a single card—but no deck in Magic's history has been more dependent on an individual card than the deck that Jeremy Neeman sideboarded into during the majority of his Limited matches at Pro Tour Dark Ascension.

Neeman could mulligan all the way down to one card in search of his Lost in the Woods.

And once Neeman found his Lost in the Woods he defeated his opponents by decking them as they attacked futilely for turn after turn, as Neeman revealed Forest after Forest, before they eventually succumbed to Neeman's forty-five-card deck.

If his opponent had a way to kill an enchantment, a Dream Twist, a Memory's Journey, a Lost in the Mist, or a Curse of the Bloody Tome, Neeman would leave the Lost in the Woods in his sideboard and try to win normally.

But for opponents who didn’t have a way to break up the Lost in the Woods lock, they would be in for one of the most frustrating losses of their lives.

As cool as the plan was, Neeman ultimately lost while playing for Day Two to a Gravepurge that replenished his opponent's library.

While I wouldn't recommend going with Lost in the Woods every time you get your hands on it, it's definitely good to remember that you can use it to win matchups that would otherwise be extremely difficult.