Posted in Limited Information on December 27, 2004

I don't know about the rest of you but quite often I find myself with some free time over the holiday and this article details some fun limited formats that you can play to fill up that time. Everyone needs a break from the standard booster drafting once in a while and there are formats here that can be played with as few as just two players. Team drafting is a particular favourite of mine and is a great way to spend a couple of hours with some Magic-playing friends. (One last note: if you want to find out how the draft pick at the end of this article turned out, you can find that article here)

week I thought I'd move off the beaten track a little bit and explore some alternative limited formats that you might not have heard of but that are fun and very strategic all the same.

In the months I've been writing this column I've had several readers write to me to say that they often couldn't get eight players together for a draft and was it okay to draft with 2-4 players? The simple answer is yes, you can do booster drafts with any number of players. I personally have spent many an hour in an airport departure lounge doing three or four player drafts whilst waiting for a plane to or from the latest Grand Prix event. However, when you are short of players there are some alternatives to a standard booster draft that you might want to consider.

Solomon draft is a great limited format for two players. You need the standard three booster packs per player and they can be all from the same set or from different sets if you like. You can even play this format with six completely different packs but it tends to play better if you use packs from the same block. The way the draft works is very different from a typical booster draft that you're used to though.

At the start of the draft you open up all the packs without looking at any of the cards. You should have six packs (three packs from each player remember) and at 15 cards per pack you'll end up with a stack of 90 cards. These cards should be kept face down so neither player sees them and they should then be shuffled thoroughly. Decide who goes first and then you're ready to start.

The first player counts eight cards off of the top of the pile and then turns them face up. They then have a minute or so to sort those eight cards into two piles. The piles can be split any way that player chooses – you can have a single card in one pile, and seven in the other if you like, and you can separate the colours or mix them, whatever you like – and then the second player gets to chose which pile to take. The player who split the cards up gets the remaining pile of cards. You then swap roles and the second player takes the next eight cards and splits them into two piles with the first player then choosing which of the piles he or she wants. You repeat this process eleven times in total, alternating who splits the cards up and who chooses which pile they want each time. The last two cards aren't used. I should note that some players advocate doing groups of nine or ten cards at a time as that means no cards are left unused but for some reason groups of eight is what is typically used.

Once you've drafted the cards, both players are allowed as much land as they want to build a 40 card deck from the cards they selected. Because the piles you split up aren't necessarily even it's highly likely that one player will have more cards than the other but that's just part of the game. If you have fewer cards then hopefully they'll be more powerful to make up for it.

This format can be very difficult to play correctly as there are a ton of decisions to make every time you split up the cards. Imagine doing this draft with two sets of Mirrodin-Darksteel-Fifth Dawn. Consider how you'd split up the following eight cards if they came off the pile first: 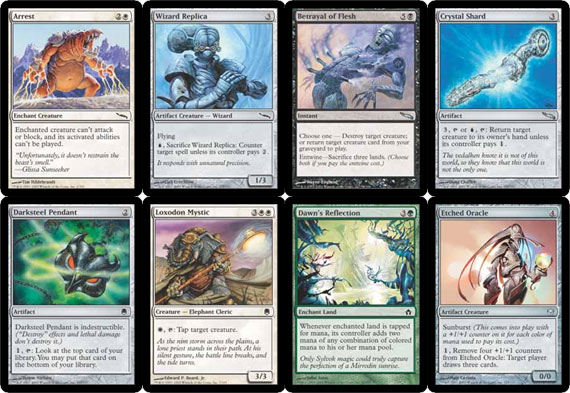 How do you go about splitting those up? There are two very powerful cards in the Betrayal and the Crystal Shard. You could separate the piles like this for example: 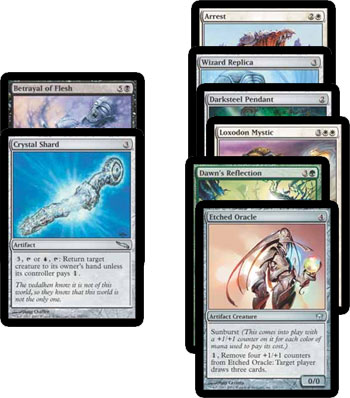 But is it worth giving up four or five solid playable cards for the chance at the two best ones? The beauty of this format is that you can't make one side vastly more powerful than the other, as your opponent will simply select the better pile, leaving you with the weaker cards. At the same time, you want to try to trick your opponent into taking the pile you want them to take.

A big part of the skill in this format is remembering what cards your opponent has already taken and balancing out the piles to take advantage of that. You might also be able to trick your opponent into taking the better cards but at the same time leaving them with a terrible mana-base and not enough playable cards overall.

One of the great things about this format is that when you are done, you can just shuffle up all of the cards and start afresh. The cards will come off in a different order and the new draft will be completely different. You can also do a Solomon draft by simply grabbing 88 random commons from your collection or by building a specific set of 88 cards that have a theme and draft from those. Indeed, this is exactly what Mark Rosewater did at the Magic Invitational in 2000 where he used all multi-colour cards and mana fixers to make for some very difficult choices for the players. 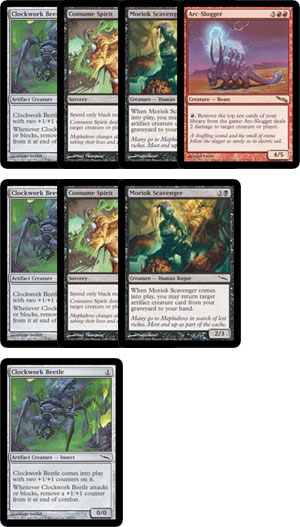 This name is used to refer to a couple of different formats but the one I know it as is basically a variation of Solomon draft only it's designed for any number of players as long as it's a multiple of two (2, 4, 6, etc). The set-up is more-or-less the same; players pair off and you start with three packs each and open them all up before the draft, only this time you give each player enough time to review all of the contents. The cards are then shuffled together and you start by taking the top four cards and placing them face up on the table. The first player takes one of the cards, the second player then chooses two, and finally the first player gets the last card. This process is repeated with the next four cards but with the players taking turns to pick first. The last two cards can either be divided randomly or left out altogether. You then build your decks and play a standard match.

Once the first set of matches is complete, if you are playing with a group of four or more players, you then switch opponents just like you would in a regular tournament. Each player then removes the land from his or her deck and adds their pool of cards to their opponent's and they do a new draft with this pool of cards. Every time you have a new opponent you take apart your deck from the last round and mix it with your opponents to create the pool of cards from which to draft. This way you get a different pool of cards each draft and you get to play a different deck each round. The player to win the most drafts can be declared the overall winner. 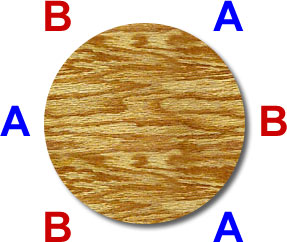 If you can get a group of six players together, an excellent alternative to a normal booster draft is to do a 3-on-3 team draft. This is the format most Pros use when playing each other as it's a lot quicker than the team Rochester drafts that are used in the Pro-tour whilst still maintaining a very high skill level, and it also works with 2-on-2 as well as 4-on-4.

Unlike Rochester, where each team sits on opposite sides of a table, in a team booster draft the players sit so they alternate teams as you go around the table. Seat one has someone from team A, seat two has someone from team B, seat three has someone from team A again and so on. The draft itself proceeds just like a regular booster draft but the teams can get together after the draft and confer during deck-building. There's no exchanging of cards between players allowed, but it's always useful to have the input of two other people when building your deck. Indeed you may choose to include or exclude a certain card based on the colours you believe your opponents to be drafting.

A lot of the skill in this format comes from preventing your opponents from getting powerful cards whilst still drafting a great deck for yourself. Hate-drafting plays a big part. At the same time, there's a lot that can be gained through sending incorrect signals to your neighbouring opponents during the draft. The name of the game here is to draft a great deck for yourself whilst disrupting your opponents' drafts at the same time.

Once the decks are built, everyone plays a match against each member of the opposing team. That gives the possibility of a total of nine matches being played and as such the first team to rack up five match wins takes the overall victory.

There are more alternative formats out there and it's quite possible to just make up your own. I've played Chinese 4th Edition Sealed deck with all the cards shuffled up straight out of the box and had lots of fun in the process so don't assume you always have to stick to the formats that are popular. I hope you get a chance to play some of these formats one day. They're all a lot of fun and they really test your skills as they force you to think about Magic in ways that you might not normally consider.

Next week I'm going to go through a draft pick again, so I'll list it here to give you all a chance to offer your opinion in advance of next week's article.

It's a Mirrodin-Darksteel-Fifth Dawn booster draft and these are your playable cards going in to Fifth Dawn:

You open up your Fifth Dawn pack and have the following selection to choose from:

See you all next week with the results!

Posted in Limited Information on December 27, 2004