Posted in Limited Information on October 30, 2013

wo weeks ago, we took a good close look at an interesting way to help you digest the double helping of information that is a new set of Magic cards. By looking into the game's past, we found patterns that we can use to reduce the mental load when it comes time to face down a new set. We also talked about how you can front-load some of the work by thoroughly examining the new set mechanics before actually looking at each individual card. This way, when a new card with the mechanic appears, you can simply integrate it into the techniques you currently have at your disposal, like the Vanilla Test.

Another useful shortcut is to keep an eye out for "cycles" of cards. Cycles are groups of cards that have a similar representation in each of the five colors of Magic. I'll use a couple of examples from Theros: 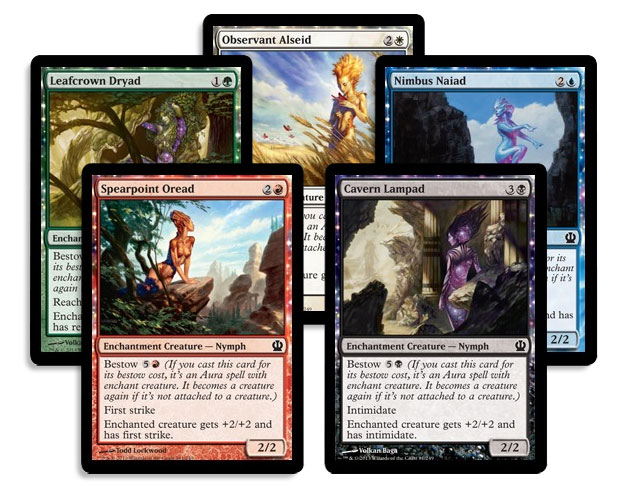 
Any one of these cards could stand on its own as a cool bestow creature. But as it turns out, they are part of a full five-color cycle of common bestow creatures. If I were to show you a Nimbus Naiad but nothing else, it would be an interesting card to analyze. I could do this for each of the five examples and you could tackle each one as a fresh card. But once I tell you that these are a cycle, you can quickly grasp what the card is doing, and focus in on the variable information. The special ability, converted mana cost, and bestow cost are the things to look for here.

Another example of a cycle in Theros: 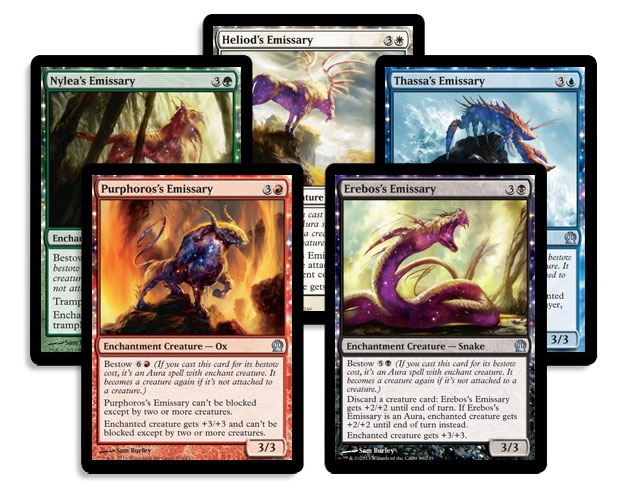 
These ones happen to be uncommon, but once I saw Heliod's Emissary and was told that it was a cycle, I knew what to look for. Since the converted mana cost is the same on each instance of this cycle, it became the special ability plus the bestow cost that mattered.

Being able to skip the whole "getting acquainted" part of a card evaluation is a big timesaver and lets us manage information more efficiently. Knocking out five cards with one section of the mental hard drive is a great way to get ahead.

Creatures of the Past

I used riffs on Grizzly Bears as a starting example in the first part, and then focused the examples on recurring noncreature spells from throughout the history of Magic. This week we'll go deeper on the creatures.

Besides Grizzly Bears—usually referred to simply as a "bear"—there are other creatures that fit this recurring-riff mold. They tend to vary more than the spells, so identifying and classifying them can be tricky. The most important thing: when you see a creature that fits this description, recognize it and file that info away for later use.

Sticking with green creatures, let's have a look at an old favorite:

Often repeated, "mana Elves"—creatures that produce mana, but are not necessarily Elves—can serve a powerful role in Limited. Mana Elves range from quite powerful to pretty unexciting depending on the format, but once it's clear that a format wants them, they tend to get picked early in a pack.

If we identify a mana Elf early in a format, it's important to keep it in mind as we look at the rest of the format. Being one of the first to figure out that mana Elves are good in a new set is a sizable advantage, as we can pick them earlier than others will.

Here are some recent examples:

When it comes to mana producing creatures, a key point to pay attention to is the casting cost of the creature itself. There is a big difference between a one-mana mana-producer and a three-mana mana-producer. Being able to play a three-drop on turn two can be powerful. Making the jump from three mana to five is often less impressive.

Next on the list is a creature-based form of card advantage called a gravedigger.

Gravediggers let you return a creature from your graveyard to your hand when they enter the battlefield. The original Gravedigger pictured above was just a 2/2 for four mana. Not an entirely impressive body, but after playing it, it becomes clear how powerful this type of card can be. A 2/2 body is just about worth a card on its own, and when you tack on a spell that lets you get a creature back, it's a sweet package.

Gravediggers aren't as common as some of the other cards we have looked at for this series. They pop up from time to time, but their presence is always notable and in most formats they are quite strong. If you see a gravedigger in a set you are attempting to dissect, keep discard or mill effects in mind, as you may be able to generate some value in places others won't see it.

Clones—creatures that copy other creatures—are slotted at rare, but they show up often enough that you should be noting it when there is a clone in the set. You won't see them too often during a draft, but they are a popular trope that will continue to be printed going into the future.

I wouldn't spend too much effort thinking about how a clone affects a format; just note that it's there and move on.

Hill Giant is almost as ubiquitous a nickname as "bear." It really means "3/3 for

," but you'll often hear people use it to describe any 3/3 for four mana.

Hill Giants are everywhere in Limited, but not all are created equal. Just a regular old vanilla Hill Giant is usually a playable card, even if it's not an exciting one. But sometimes you'll see Hill Giants pushed pretty hard on power level. These are worth noting, as they can sometimes be overlooked early in a format simply because they remind people of boring old Hill Giant. Cards like Rubblebelt Maaka, Ill-Tempered Cyclops, and Oxidda Scrapmelter are all big performers in their respective formats.

Oxidda Scrapmelter actually falls into another category as well: perhaps the most coveted of all Limited creatures, Nekrataals:

Nekrataals—the nickname for a creatures that kills another creature when it enters the battlefield—are highly sought after in Draft because they offer the easiest two-for-ones available in Limited. You simply cast them, and while taking down an opposing creature, you create one of your own. For one card, this is a true bargain, and embodies the concept of value.

While these pop up somewhat infrequently, they are usually very high picks in Draft. If you see one in a new set, prioritize it and look to pick it early. People generally catch on quickly when one of these is floating around a set, but being the first to notice it can't hurt.

When it comes to blocking, few do it better than this:

Giant Spider (or just a spider) is a term used to describe creatures that have higher toughness than power, as well as reach.

Giant Spiders are everywhere. With apologies to my arachnophobic readers, this is probably a good thing. They serve an important role in Limited: defense. Giant Spiders are tailor-made for blocking, and blocking well. They tend to be especially good versus blue decks, but they also do a fine job holding the ground game against the other colors.

Wind Drakes are usually 2-power fliers for three mana. They to tend to vary a fair bit, so don't assume they will always have these exact stats.

Wind Drakes are usually one of the most solid blue creatures available in a set. They aren't flashy, but they do serious work in a game of Limited, and it's difficult to find a spot where they aren't at least passable. Things get even more interesting when they are used as the canvas for new mechanics. Nimbus Naiad from Theros is a recent example of a Wind Drake with serious upside.

Usually, Wind Drakes only make up one piece of the blue flying puzzle. If they have company, they are even better, as they can be used to make an entire archetype for Limited. Flying creatures with good blockers on the ground plus some tempo have been teaming up to win games of Limited for years. Wind Drake is a cornerstone of that strategy.

You'll see these creatures, and others, time and time again in future sets. There are two key takeaways to keep in mind for with creatures like this:

We are all confronted with a massive amount of sweet, sweet information whenever a new set comes out. I hope you can use some of the techniques discussed here to help you navigate the surging waters and to get ahead of the game when it comes to the next set.

Posted in Limited Information on October 30, 2013