Posted in Limited Information on December 11, 2007

is my fortieth article writing for magicthegathering.com. It also follows on the footsteps of Worlds and the beginning of a new season. I feel like this article should be something epic. In honour of the now demised Online Tech column and its mastermind, Frank Karsten, I will endeavour to bring you "the list". Well, technically not the list, although if I have time I will add that at the bottom of the article. I will bring you a list of picks for each of the five tribes I've had the most success with and a brief summation of what to look out for with each one. I focus on these tribes because they alter the pick order of cards enough to justify their own list. Elementals drive the entire list screwy as it is completely dependant on which crazy cards you pick up to splash. For today, I will look at Merfolk and Elves.

In each archetype, I make the assumption that you are already in that archetype, not foraging around the first few picks of the draft, for which the ultimate list is more relevant. It is also incredibly important to note that these lists are both very subjective and prone to error. There will be many draft situations where scarcity or deck irregularities mean you are forced to pick a lowly common over a powerful rare. These lists are also far from perfect as it really is a very fine line between a lot of the cards, and when in doubt with something that's very close, it is normally always better to pick what goes better with the deck.

Most merfolk decks wind up being nearly mono-blue with a light-to-heavy white splash and some other splash for one or two cards. With this in mind, below I've included every card you would ever normally consider splashing. Brian Stoutarm and Imperious Perfect didn't make the list because you will only ever splash them off Shimmering Grottos; likewise, if you have enough mana to support Wydwen, the Biting Gale, he becomes a slam. Judge of Currents is probably the most important common merfolk to the tribal theme as a whole as he sends the deck into overdrive. The other most important card, which combos well with the Judge, is Springleaf Drum. As soon as you have a Fallowsage or Surgespinner, the Drum bumps up the ladder a reasonable amount. Not only does it accelerate you and help splash, but it sends the merfolk engine into space. Likewise, if you already have a Summon the School, then Merrow Harbinger becomes a must have.

After this the actual quality of the card doesn't matter as much as what your deck is missing so far. You're filling curve and necessity holes, not picking a card because it is strictly better than the other option. 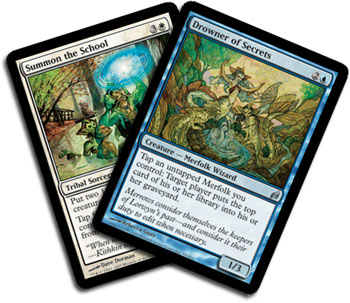 One of the most important things you need to look out for with merfolk is that you are able to win the game. This may sound sarcastic initially, but I've seen many merfolk decks full of Silvergill Dousers and Stonybrook Anglers with absolutely no way of being able to actually kill the opponent. You need three or four cards that will actually get the job done. If you have enough Judge of Currents then both Summon the School and Drowner of Secrets will win for you. If not, then you will have to hope your few rares or random fliers will take it down for you. To this end whilst drafting keep an eye on your number of win conditions and if it is getting late in the draft and you are light, value them more highly.

Merfolk are lucky compared to the other tribes insofar as they have several key commons that define how the archetype works. Streambed Aquitects are crucial when you finally need to win – they provide evasive creatures against fellow blue drafters and pump men much akin to Kabuto Moth-like cards of the past. Early on they provide some much-needed defence and are one of the few common merfolk who can actually block (although make sure they are active first).

On top of this, Stonybrook Angler is underrated. An Angler in isolation is strong; when teamed with any of the other key commons, the game becomes difficult to lose. By himself, he tends to tap their best attacker and be done with it. With a Douser or Aquitect in play, you can almost always let your opponent attack, safe in the knowledge that there is nothing they can do to win – untapping both the other merfolk to use their effect twice is often enough to rule the combat phase. In conjunction with Judge of Currents, by targeting itself repeatedly, you gain a life for each two mana you have in play. This little combo, the last activation normally tapping their best guy still, will normally be enough to either win you the game right there, or give you enough time to draw into your win conditions. Either way, it is crucial to understand that most of the Angler's power comes in cooperation.

Most Elf decks wind up with similar colour proportions to merfolk – practically mono-green with a light-to-heavy black splash and then a couple of off-colour power cards. The best non-removal common for elves is Lys Alana Huntmaster. It is the cornerstone of the archetype. I am always disappointed if I have less than three in my deck. Elf decks function on the assumption that you have lots of the wee guys in play to fuel cards like Elvish Branchbender and Lys Alana Scarblade. It is because of this, and that the Huntmaster generates card advantage and lets you go 'nuclear' and reach critical mass ahead of time, that it is so crucial. It is a four drop, which means that Leaf Gilder gets picked higher the more you have in need of being accelerated. When you drop the Huntmaster of turn three and manage to untap with it in play you will probably win, as your draw will become incredibly quick and swarming.

Elves are one of the best archetypes that benefit the most from going all-in for tribal synergy. Lys Alana Huntmaster tends to provide all the elves you need to use and abuse the tribe's more subtle cards. Elvish Branchbender is probably highest on the common list in this category. Whilst the game often stalemates thanks to the massive amount of elves you generate, the Branchbender will provide an almost endless stream of expendable attackers that will dent their defence until the rest of the elves can come swarming over the top.

Lys Alana Scarblade is possibly the most underrated card in the entire archetype and I still see it in packs with only four cards left. It is a machine. If it stays on the board, you will definitely win the game. Each turn, especially if you go crazy with a Footbottom Feast, you can kill your opponent's best creature and with a Warren Pilferers or two to return it when it inevitably gets dealt with it can win games again and again. Remember that almost every card in the archetype is an elf and you will almost never run out of ammunition when you need it.

These lists will hopefully answer several questions as to complicated picks and general power levels. I'm sure the forums will go nuts at the mistakes that I am sure proliferate the lists as it's virtually impossible to cater for every scenario and pick.

Hope this all helps,

Posted in Limited Information on December 11, 2007