Look to the Future, Not the Past

Posted in Limited Information on September 9, 2008

So what if you made a mistake? If the situation dictates that you should go a certain way, then do it. You shouldn't let your past mistakes or ultimately wrong judgment calls get in the way of pursuing the correct course of action.

Let's say that you are playing a game of Lorwyn / Lorwyn / Morningtide draft, it's turn four and you just played a Drowner of Secrets, an incredibly important card in your Merfolk deck, only to have your opponent tap two untapped lands to Broken Ambitions it for one, countering it.

Now, this situation could have been easily avoided had you just played one of the lands in your hand before playing the potentially devastating Drowner of Secrets.

The next thing that you need to do is swallow your pride, play your land, and then pass the turn.

The same principle applies if you are doing a draft and you take the wrong card. If you have a chance to repair the situation, then do it. Don't let one mistake ruin the rest of your draft.

Similarly, if you build your Sealed Deck wrong and you notice it, fix it in-between games! So what if you played the wrong colors, if you realize that making a swap after every Game 1 will improve your chances of winning then do it!

In fact, when I was playing in one of my first GPs, Grand Prix–Columbus '04, I misbuilt my Sealed Deck terribly. During my byes some of my friends, and at the time far more experienced players, looked my deck over and suggested that I swap out an entire color after every Game 1. I was initially quite resistant to the idea, but after thinking it over a bit I decided that it was definitely the right play.

So I lost a lot of Game 1, but I was able to swap my deck into the right configuration for Games 2 and 3. With a little bit of luck I was able to make my first ever Grand Prix Day 2. Had I not made the swaps during every round I surely would have found myself playing in the PTQ the next day.

You should always make the best play that you can think of, even if it feels a bit embarrassing.

But How Good Is it Right Now? 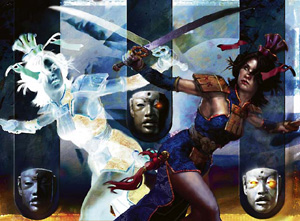 I'll see people make the mistake of misevaluating cards that are in play, or in someone's hand, based on their abstract value instead of their real value all the time.

How good a card (or a fraction of a card) is in the abstract doesn't actually matter when you're playing a game. While both players' potential for future output does matter a lot when you are trying to determine your plays, the source of the cards already in play shouldn't actually matter.

Just because a creature is a 1/1 doesn't mean it isn't a real creature. For example, if you see yourself being on the offensive for the foreseeable future, and you have a lot of high power 1-toughness creatures, then that 1/1 might as well be a 3/3 for all you're concerned. While you are willing to trade your 3/3 for a 3/1 all the time, you should be just as willing to trade your 3/1 for a 1/1 if the situation calls for it.

Now admittedly, most of the time you are not going to want to trade your 3/1 for your opponent's 1/1, but when it's right to, you shouldn't hesitate at all to do so.

Perhaps the most common situation where people feel like they should hold a card because it's "too good" is when a player has a premium removal spell, such as Puncture Blast, and their opponent has an okay creature.

The reason why cheap removal cards are considered "good" or "great" in Limited is because they always have a lot of utility. Sometimes you get to use them to kill the best creature in your opponent's deck, and that's great. Other times you use them to kill the 12th pick that your opponent put into the deck as a 23rd card. And while that might make you feel kind of stupid, that doesn't mean it isn't right.

Sure, there are plenty of times when you want to hold your removal spell to kill something more important, but you have to be aware of what you're giving up to do that.

While it might be better to play a Puncture Blast on a Sootwalkers than it is to play it on a Fang Skulkin, if not killing that Fang Skulkin means that you're going to take an extra 4, 6, or even 8 points of damage, then you're probably better off just killing the innocuous-looking 2/1.

Just remember that sometimes that truly scary situation happens before you realize it, especially if your opponent's deck is very fast. In other words, don't let yourself fall behind if you know you won't be able to catch up. (I'll have more on this principle soon.)

Another mistake that people often make is forgetting that a card is usually considered "good" or "bad" because of its mana cost. Sure, Antler Skulkin might not be a very good card in the abstract (five mana for a 3/3 without a great ability typically isn't a very good deal), but once it's in play its ability makes it noticeably better than, say, an in-play Cultbrand Cinder.

While this doesn't typically have a big effect on the way that people play, it is still something that's worth keeping in mind.

Look to the Future, Not the Past

It often doesn't matter if a vanilla 3/3 is a Hill Giant, a Call of the Herd token, a Savage Conception token, a Sootwalkers, an in-play Briarhorn, a Watchwolf, a Grizzly Bears with a +1+1 counter on it, a Stalking Yeti in a deck with no snow lands, a Panther Warriors enchanted with Torpor Dust, or a Vizzerdrix with three -1/-1 counters on it. Unless there is some reason why a player would be able to change the real utility of the card, such as a bounce spell to get another devastating use out of a Briarhorn, or a Fate Transfer to move a bunch of counters, or a Dread Return to return a Stalking Yeti into play, each of these creatures is just going to be a 3/3.

Players will usually have a lot of respect for 3/3s regardless of their source, but the same can't always be said for 1/1s.

So, if your opponent has some tokens that he got from a Lys Alana Huntmaster, which you later killed, you should think to yourself not, "Oh, he got those tokens for free. I shouldn't trade my real cards for them." Instead you should think, "Oh, those are 1/1 creatures."

But if your opponent's Lys Alana Huntmaster is still alive and pumping out tokens, then you've got some more interesting things to think about... 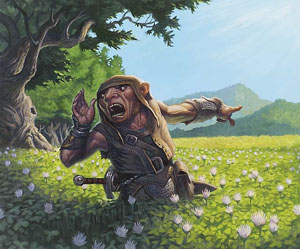 I've already mentioned that you want to be sure to treat 1/1 tokens as real creatures, but what happens when you know your opponent can make more of them? If your opponent is popping out a token every turn with Selesnya Evangel, or two tokens with Cenn's Enlistment on a regular basis, then you need to take that into account when you are making your plays.

So, if your opponent has no way of generating new tokens, and they have two 1/1s in play, then you will probably be more than happy to trade your 2/2 for the two 1/1s. But, if instead, your opponent is pumping out two 1/1s every other turn with Cenn's Enlistment, then you very well might want to leave your 2/2 back as a blocker to help discourage attacking.

Similarly, you might shy away from blocking your opponent's 2/1 with your 3/1, hoping to set up a more profitable situation later. But if your opponent is popping out 1/1s like there is no tomorrow, then suddenly trading your 3/1 for a 2/1 looks like a pretty attractive deal.

If You Think it Could Get Out of Control, Cut it Off!

When you are playing a game of Magic you should always try to see where the game is, or could be, going. If you know that all that you have to do is get to six mana at a reasonable life total and you will be able to thrash your opponent with your monsters, then by all means use a removal spell on your opponent's two mana 2/1. If you know that the only way your opponent can beat you in the long game is if they play their dragon or set up a combo such as Resplendent Mentor + Silkbind Faerie, then you should do everything you can to prevent that from happening.

While you might not know exactly what your opponent is playing for, if you think something's up, and you can afford to be prepared for it, you should be. Just make sure you aren't giving up too much for a boogieman that might not even be real.

Sorry if this article seemed a bit repetitive, but this type of forward thinking is one of the most important things that I've learned on my road to becoming a good Magic player. So remember, when you are playing a game of Magic, things will change dramatically on a regular basis. One turn it could be right to trade your 3/1 for your opponent's 1/1; the next turn you might need to hold your 3/1 back so your opponent won't attack with his 5/3. One turn the most important thing might be trying to get damage in to kill your opponent quickly; the next turn it might be trying to lock the game down so you can win by decking eighteen turns later. You always want to be aware of what's important moving forward, not what was important before.

I am really glad to have shared this with you and I hope that you will be able to incorporate it into the way that you think about Magic.

Posted in Limited Information on September 9, 2008