Is a Machine Gun a Robot?

t's Living Weapon Week here at DailyMTG.com, so now seems like a perfect time for us to try to answer the age-old question of whether or not a machine gun is a robot.

You still want me to write about Mirrodin Besieged / Scars of Mirrodin Limited instead of something that was already resolved on a podcast that I listened to a couple of weeks ago?

I guess that's reasonable too.

A couple of days after the Mirrodin Besieged Prerelease, our esteemed editor Kelly Digges mentioned to me that the living weapons were even better than they look, and that I should bear that in mind when writing about them. They looked pretty good to me, and I knew that I would play any living weapon that made its way into my pool—but I couldn't imagine drafting (most of) them that highly. 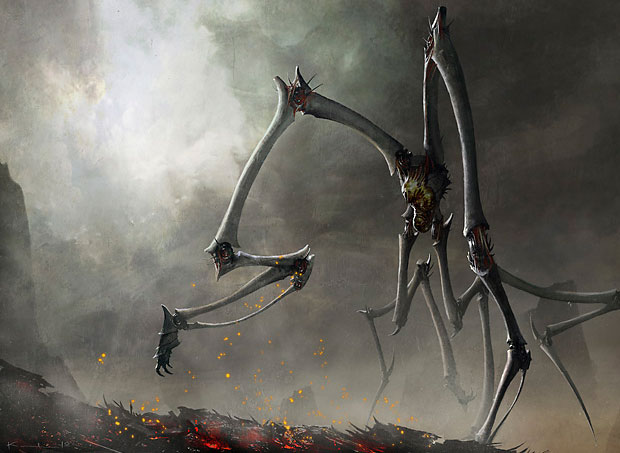 After all, it takes a lot of mana to get an advantage out of them. Until then, you are just paying

for a 2/4 with reach. While these are reasonable prices indeed, they aren't anything special. If the living weapons were just creatures (rather than sticking around as Equipment), only Bonehoard would remain an early pick.

There were a couple of things that I didn't understand (at that time) about Mirrodin Besieged / Scars of Mirrodin Limited that prevented me from recognizing just how good the living weapons are in this format.

A ton of trading goes on in Mirrodin Besieged / Scars of Mirrodin Limited.

One of the key reasons for this is that creatures with infect are very scary. If your opponent is playing a pure infect deck, it's like you start the game on 10 life. As soon as you've taken two hits from a Plague Stinger and a hit from a Cystbearer, you will only be able to withstand five more poison counters before you perish. If your opponent has an Untamed Might, you could easily be dead on the fifth turn—and even if your opponent doesn't have a pump spell, if he or she can clear the way for a two-mana 1-power infect creature and a three-mana 2-power infect creature, you are going to be dead by the sixth turn.

If you start taking hits from infect creatures, you are going to need to find a way to blunt your opponent's assault quickly, or else you aren't going to be long for this world. (On a somewhat related note, Blunt the Assault is a completely reasonable sideboard card if your infect opponent has shown you multiple Giant Growth effects).

So if you are playing against infect, you should probably be looking to trade your creatures for opposing ones at every opportunity.

If you are trading cards left and right, you are eventually going to need to find a way pull ahead on cards, or else you are going to get buried by your opponent's Morbid Plunders and Corpse Curs. The living weapons do that for you.

Mirrodin Besieged / Scars of Mirrodin is not a particularly fast Limited format.

While Skinwing and Strandwalker are quite good in this format, they wouldn't have been impressive at all in the lightning-fast Zendikar Limited format. Flayer Husk and Mortarpod would still have been quite good due to their low cost, but the slower living weapons would rarely have gotten the opportunity to impact the board in a meaningful way because they are so expensive to use.

Six mana to give a creature +2+2 and flying? Thanks for tapping out! Now I'm going to kill you...

But we aren't playing Zendikar Limited; we're playing in a world full of artifacts and trying to battle off (or embrace) Phyrexian overlords.

That means that we frequently get to a point in the game where we will have the time to spend a half-dozen mana to give one of our creatures +2/+2 and flying. Once we do this, we will be able to turn our mana Myr into formidable threats and our Alpha Tyrranaxes into some of the scariest creatures imaginable (and for the regular readers: in case you were wondering, my obsession with Alpha Tyrranax isn't going to end anytime soon).

No, you still don't want to spend complete turns early in the game equipping creatures (even though most games go long, you can still get blown out by some well-timed removal spells, even temporary ones like Disperse) but once the game does go long, you are going to need to find ways to pull away.

The Importance of Removal and Bombs

There are a good number of game-dominating bombs in Mirrodin Besieged / Scars of Mirrodin Limited. If left unanswered, these bombs tend to take over games pretty rapidly. 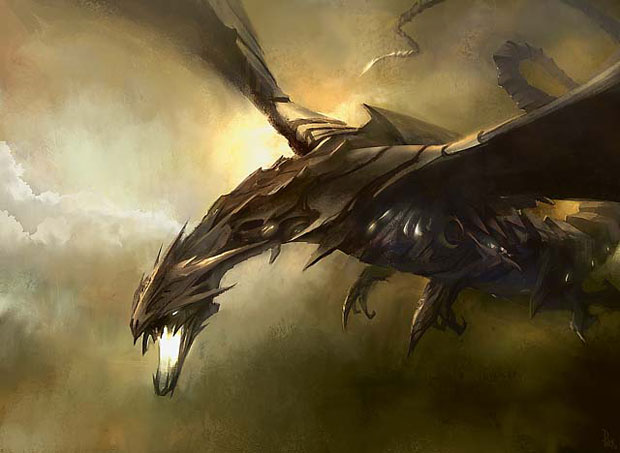 An active Steel Hellkite will clean things up in a matter of turns. A Carnifex Demon is going to make your life hell (for the relatively short amount of time that you will still be alive). Heck, even a Victory's Herald or a Phyrexian Juggernaut can knock you out pretty quickly.

If you don't have that removal spell at the ready when your opponent casts one of these bombs, you are probably going to lose (unless you also have an unanswered bomb of your own—but I digress).

Given that the format isn't all that fast and that there are a lot of creatures that are good at trading in combat, you will often be able to hold onto your removal spells until your opponent plays one of these top notch threats.

This means not spending removal spells to kill dorks that just happen to be holding pieces of Equipment on them (even if your opponent invested a lot of mana into equipping them) unless you are actually going to be able to take advantage of the time you've gained.

If you go about killing any decent creature that your opponent casts (or creates, with the aid of Equipment) then you are going to set yourself up for quite a few losses at the hands of Steel Hellkite–level cards.

This opens up the opportunity for you to spend more mana than you would otherwise to supersize your creatures.

While it's certainly possible to put together an extremely aggressive deck, it's difficult to (regularly) swarm a prepared opponent with anything but the most impressive of decks. 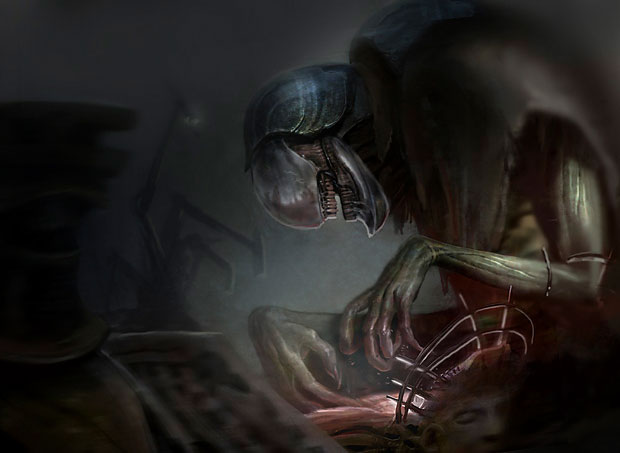 Given how much one-for-one trading goes on and the relatively slow speed of the format, it is very important to find ways to get up on cards over the course of the game—drawing multiple cards, using one of your cards to get rid of two opposing ones, etc. Even Vivisection (which would be underwhelming in most formats) is a pretty great card in Mirrodin Besieged / Scars of Mirrodin Limited.

The living weapons allow you to grind out a significant advantage over the course of a game (unless they are Shattered, in which case that will still clear the way for your other top-notch artifacts, so that's still very valuable).

First you get a Germ that will be able to trade for one of your opponent's creatures, then you get a pretty significant piece of Equipment. All from a single card.

The Living Weapons Themselves

Bonehoard is a very good card that is easily worth first picking. Skinwing and Strandwalker aren't quite up to Bonehoard's level, but they are noticeably better than everything but the best cards in the set.

I can't say enough good things about Mortarpod. Against both metalcraft and infect, Mortarpod plays a key role, eliminating mana Myr and Plague Stingers that would otherwise allow their controllers to quickly take over the game.

In metalcraft decks, it helps you buff up your artifact count while simultaneously killing off your opponents key early drops. And in infect, it allows you to clear a path early, and eventually allows you to inflict those final few poison counters on your opponent. Against big green "dinosaur" decks, it will allow you to kill off early accelerators, delaying your opponent's 5/5s and 6/5s by at least a turn. Heck, it even kills all those annoying Embersmiths and Myrsmiths.

Toss a Mortarpod on a Viridian Emissary and use it to kill an opposing mana Myr and you're going to gain a ton of time. The innocuous-looking Contagion Clasp turned out to be one of the best Limited cards in the format, and Mortarpod is no different.

Flayer Husk is a good card, but it isn't quite on the same level as the other living weapons. That said, if you are involved in any sort of race, then Flayer Husk is going to be a fantastic asset. But I still get the sense that I might be undervaluing Flayer Husk.

Heck, Jon Finkel took Flayer Husk fourth pick (out of an admittedly weak pack) in the Top 8 of the StarCityGames.com Draft Open in Edison, New Jersey last weekend. If that isn't a sign that Flayer Husk is worth respecting, I don't know what is.

So, while the living weapons might not seem that impressive at first glance, they are actually quite strong in this Limited format.

So while you might not want to main-deck Crush or Tel-Jilad Defiance in your draft decks, you should definitely be looking to board them in if your opponent shows you a living weapon or two, and they should definitely make the main decks of your Sealed decks (where your opponents are quite likely to have living weapons, as they open three times as many Mirrodin Besieged packs as they do in Mirrodin Besieged / Scars of Mirrodin Draft).