agic 2014 Core Set is proving itself to be an exciting Draft format. Core Set Limited carries with it the stigma of being simpler than regular sets. People often assume that since it's aimed at newer players as an entryway for Magic that it can't be as dynamic and interesting. As we have seen in the past (starting with Magic 2010) it is in fact possible to create a dynamic Limited environment using the core set toolbox. Magic 2014 was the next in line, and now that we have had some time to play it, I wanted to check in and see what has happened in the format.

This question comes up occasionally during the natural course of a Limited format: Do you play first or draw first if you win the opening die roll? The default answer is to play first. Numerous people have run the numbers on this, and there is usually a slight advantage to going first. The player who goes first has the opportunity to go first in Game One, but also in Games Two or Three depending on how things go. They get the chance to go first twice during the match, where the opponent does not. In formats that were considered fast, going first was not only preferred, but also demanded. If you decided to be on the draw in Gatecrash or Zendikar, you were simply asking to get bulldozed. It would have been considered bordering reckless to do so.

But in slower formats, it often becomes neutral or even advantageous to draw first. Magic 2014 looks like it might be one of those formats. I have been drawing first with most of my Draft decks on Magic Online, and I feel like I've been rewarded for it. Remember when we talked about speed of the format and I did some research on what we may predict from Magic 2014? Our hypothesis at the time was that the format would be slow and our evidence was pretty ample: The removal was good, the creatures weren't aggressive in nature, and no one color had an obvious aggressive strategy attached to it.

From my experience in the format so far, we were dead on. It's slow. Not the slowest I have ever played, but it's up there on the list. You definitely have time to resolve big spells and to craft a deck in such a way that the game will go almost indefinitely.

In situations like this—when you aren't under immediate pressure all the time—you will often benefit more from going second than from going first. Going second when you are rarely under any immediate threat means that you get the advantage of an extra card drawn, which can help smooth out your early draws, ensure land drops, and be a crucial extra spell late in the game. Unless your deck is very assertive, I would consider drawing first in Magic 2014.

I wasn't as excited as some people were when Slivers were revealed in Magic 2014. I don't have anything against them, mind you, but I also don't hold them near to my heart in a nostalgic way for some reason. I liked the changes made to them with regards to how they interact only with each other, and I looked forward to drafting them.

While Slivers are reasonable creatures on their own, generally speaking, the real appeal is supposed to be cramming a bunch of them in a deck and creating an army of super creatures. This hasn't been happening as much as I had expected at the onset of the environment. I'm not 100% sure why, but it just seems very difficult to obtain a critical mass of Slivers.

It may be that they are mostly spread out across three colors in a format that is driven by two-colored decks. It could be that some of the non-rare Slivers need a little push to be worth it on their own. 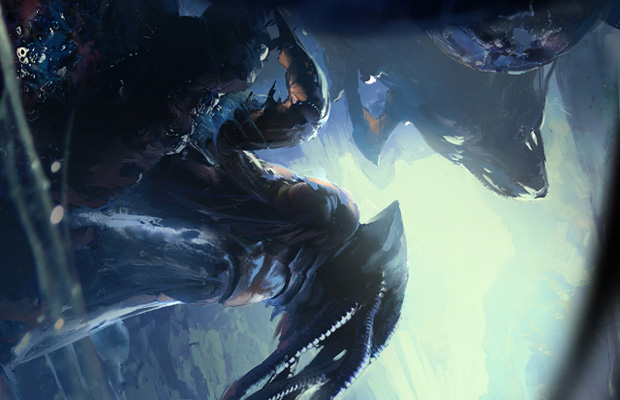 My theory is simply that the Slivers that are good enough on their own (Predatory Sliver, Sentinel Sliver, Battle Sliver, etc.) get drafted by decks simply running those colors. I have played four Predatory Slivers in my green deck just because I needed two-drops (and these had upside). I think it's difficult to start out the draft thinking, "I am going to force Slivers," and to actually have that happen.

Blue was cited early as one of the better colors in Magic 2014 Limited, and it has not disappointed. It's so good, in fact, that many have taken to drafting mono-blue decks. Normally, the issue with mono-anything decks is that they will have gaps in what they can deal with, and often those gaps are deal breakers.

Blue in Magic 2014 seems to have its bases well covered. Cards like Claustrophobia, Time Ebb, Sensory Deprivation, and Disperse give blue plenty of ways to cope with resolved threats. This is normally a huge weak point for blue, as it generally relies on counterspells to keep threats off the battlefield.

Oh, and there is a full suite of counterspells here, too. Cancel, Essence Scatter, and Negate all work nicely to keep things in check, and Archaeomancer keeps the spells flowing. The real engines for the deck are Divination and Opportunity, though. They provide such raw card advantage that playing normally poor performers like Elixir of Immortality and Staff of the Mind Magus suddenly becomes an option. In fact, Elixir of Immortality becomes a key card in a deck capable of drawing so many cards that it actually threatens to deck itself over the course of a game.

This deck has been popularized by many professional players, and since blue is already the best color in the set I wouldn't expect to be able to draft it too often.

One deck that you don't see as often but can be every bit as powerful is mono-green. Everyone knows what green is good at: making beefy creatures. And in Magic 2014, green has access to some of the beefiest. Cards like Rumbling Baloth, Kalonian Tusker, and Woodborn Behemoth can put up a lot of power and toughness in a hurry.

But beef isn't what makes this deck interesting. It's the way green fills the gaps, and the way it finishes the game, that are unique to Magic 2014. The first order of business for green is finding good answers to creatures with flying. It's too easy for a blue mage to make some fliers then start countering your big spells and gaining tempo advantage with bounce spells (like Time Ebb and Disperse). Green needs to find a way to fight back, and it turns out it has that in spades.

With Giant Spider, Deadly Recluse, Windstorm, and Plummet at its disposal, flying creatures aren't long for this particular battlefield. As far as blocking on the ground goes, well, green is already naturally good at this, and it even has a way to reach out and take down utility creatures with the slightly overcosted but still-worth-it Hunt the Weak. The ability to reach out and take down a creature on the other side of the battlefield is relatively new for green, but it's awesome to have available in this way.

The other thing the green deck needed is a big finisher all its own. And it got one:

A decidedly black-feeling card (to me, at least), Howl of the Night Pack is a pretty extraordinary finisher in a mono- (or even just heavy) green deck. Getting 14 power and 14 toughness spread out across seven bodies is really impressive. Also, there are few cards in the format that actually deal with all those Wolves. Planar Cleansing and Ratchet Bomb are the only ones that come to mind, and they are both rares. I think that as people gravitate toward blue, counterpunching with green may be the ticket to wins at this stage.

One thing that separates memorable Limited formats from forgettable ones are the build-around-me cards available. In Magic 2014, most of these seem to center around sacrificing creatures.

Bubbling Cauldron and Barrage of Expendables are two cards that people seem to have come around on lately. In a set that has Act of Treason at common rarity, it's not a big surprise to see that two cheap, repeatable sacrifice outlets have garnered some attention.

I'll admit, I still haven't found the right opportunity to try out Angelic Accord. It requires some amount of maneuvering during the draft portion, playing some mediocre cards to make it good, and it happens to be in the worst color in the set. All of these are tough strikes against Angelic Accord, but if you do assemble the two- or three-card combo, making a ton of Angels (while padding one's life total) seems like a great way to finish a game of Magic.

It's easy to forget that it's still relatively early in the format. These decks that are showing up are the first real things to stick after people started throwing every iteration against the wall. This next phase is where it gets interesting, as people start to react to the popular decks and other new archetypes emerge.

I'll be keeping my eye on it, that's for sure.