Posted in Limited Information on January 5, 2010

ave you ever gone into the third pack of a draft and still needed to get something to make your deck complete?

If you've drafted even a couple of times, your answer is almost certainly yes. 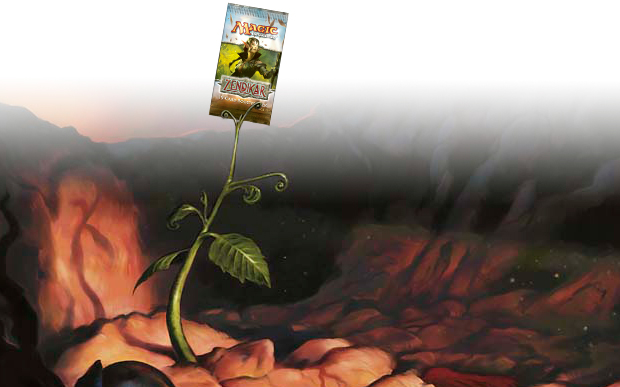 And that's perfectly okay. It's almost impossible to go into the third pack without needing at least a little something more for your deck.

You might get those last pieces that you need, or you might have to find some substitutes. Even if you don't end up with an ideal deck, your deck will still probably come out looking pretty decent if you had nearly all of the necessary pieces going into the third pack.

But if you go into the third pack needing to a bunch of cheap spells so you'll have an early game of any sort, you're going to need to get pretty lucky to have even a decent deck.

There's no surefire way to make sure that you can go into pack 3 in a good position to put the finishing touches on your deck, but there are ways of adjusting your evaluations of cards as a draft progresses that will greatly reduce your likelihood of drafting a train wreck.

Brian David-Marshall and I were talking about draft picks the other day when he brought up an incredibly important concept that I had up until that point been unable to properly articulate.

Let's use some examples to unpack what that really means. 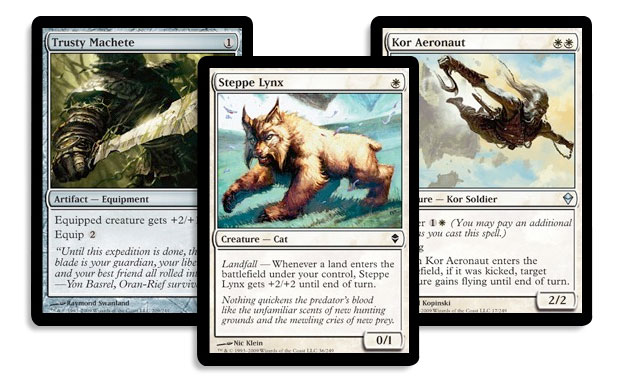 If you start your draft off with a Trusty Machete, a Steppe Lynx, and a Kor Aeronaut, then you will be just as happy to pick up additional early drops or mid to late drops with your subsequent picks. You can draft pretty much any card that is color-appropriate and, powerful in the abstract and it will be a welcome addition to your deck. In fact, if you continue to draft cheap spells, that will further expand your options as the draft progresses. 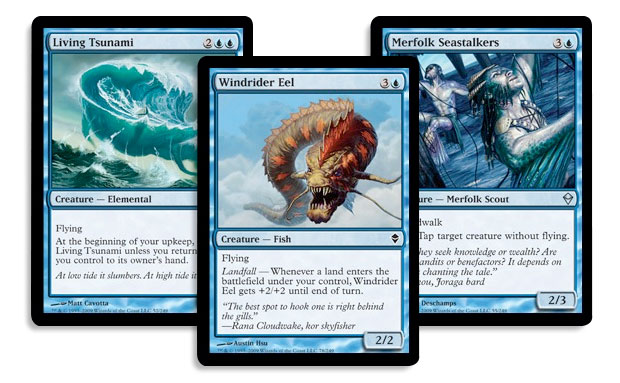 On the other hand, if you start your draft off with a Living Tsunami, a Windrider Eel, and a Merfolk Seastalkers, you will have three high-quality stall breaking creatures in your deck. But your subsequent picks will also be quite constricted. At that point, only the fourth pick of the draft, you should be feeling a pretty strong pressure to begin picking up early drops as quickly as possible.

Sure, if I got passed another Windrider Eel I would probably take it, simply because it's so good. But once I had picked up my fourth four-drop in as many picks, I would be willing to take a Stonework Puma, or even a Goblin Shortcutter in a new color, which may or may not have (m)any allies to pal around with, over the next "good" four-plus-drop that I saw.

If I began to pick up a bunch of cheap spells from that point on, I would eventually feel comfortable taking mid- to late-game spells again. But if I didn't suddenly get a windfall of inexpensive critters, I would be hesitant to further imbalance my deck in favor of expensive spells unless I had very good reasons to do so.

Why it Pays to Be Cheap

Taking cheap spells early will leave you with a lot of options as the draft progresses. Once you have a bunch of early drops, you are then free to pick up more things you can play quickly, in order to build a very aggressive deck. Or you can pick up some cards for the middle or higher end of your curve to finish out with a fairly typical looking deck.

Those early drops put you in a position where you can take advantage of pretty much any opportunities that present themselves to you.

While picking up cheap spells will allow you to proceed in all sorts of different directions, taking expensive spells will constrain your options as the draft progresses.

If you go into the third pack and you have a bunch of mid to late drops and very few cards that have a relevant effect on the board on the first three turns, you will be desperately looking for early plays to fill out your deck.

Not only will your picks be constrained, often forcing you to take even marginal early plays over almost anything else. But if you don't get those early drops, you're going to be in a world of hurt, forced to sit down and do battle with a terribly slow stack of 40 cards.

In Zendikar Limited particularly, it's difficult to overstate just how devastating it can be to have a deck that's missing an early game. If you don't play anything until turn four, you're usually going to be miles behind your opponent.

And even if the four-drop you end up playing is slightly better than your opponent's cards in the abstract, unless that somehow translates to a real advantage in the context of your deck or your games, then that abstract power advantage will mean very little. At the end of the game, if you're on 0 life, it simply doesn't matter how much "better" your cards are on an individual basis than your opponent's cards.

What ultimately matters is how good your deck is as a whole. As a result of this, when you are early in a draft, cheap spells offer more equity than you might otherwise realize because of their ability to open up, rather than constrain future options.

When You Want to Go Big

As the draft progresses, you will be able to develop a pretty good sense of what your deck wants and needs. So, once you are well into the second or third packs, you should be prioritizing cards based primarily on how they will complement the cards that are already in your stack, not based on how they will set you up for the rest of the draft. (Please note that while there are times when it will be correct to make speculative picks well into a draft, those situations require a potent cocktail of needs and expectations to come about.) 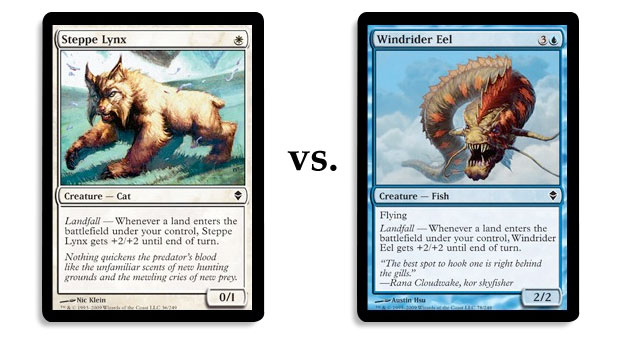 I would recommend that you take a Steppe Lynx over a Windrider Eel early in a draft, because the Steppe Lynx will likely make the rest of your draft go more smoothly. But if you are presented with that same choice in the second or third pack you will have to decide, based on what you already have and what you can reasonably expect to get, which of these two cards—which despite being quite different are similarly powerful in the abstract—will be better for your deck.

How many times have you been in the spot where it's the second or third pack and you've had to pass up a Windrider Eel or a Shatterskull Giant because you already had enough spells that cost four? Probably a good amount. 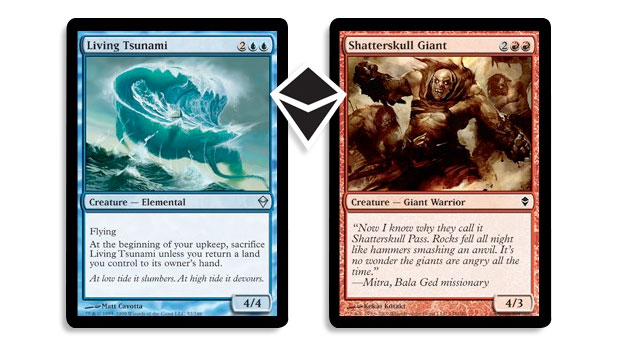 In large part this is because high quality four-plus-drops are fairly easy to come by in triple Zendikar drafts.

However, it isn't a universal truth that good four drops are easy to come by and good two drops are something you need to fight over. Rather, different formats require you to prioritize different things.

If you're drafting a set, like Magic 2010, that features an overabundance of reasonable two-drops and games that often go very long, then you're going to want to make sure that you pick up your fair share of game-breaking cards. You will almost never be wanting for 2/2s for two in a triple M10 draft, so you can go into the third pack needing a number of early spells without too much guilt. 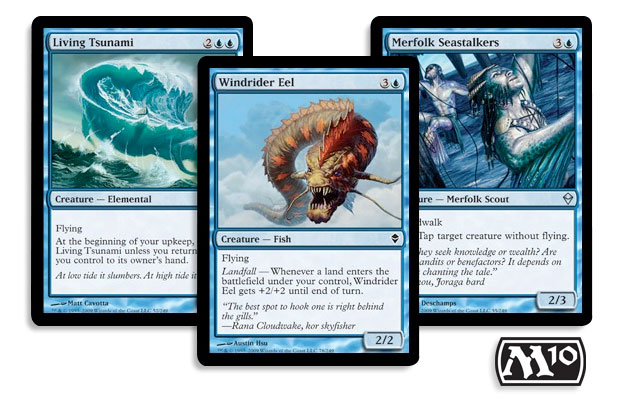 Instead, you need to prioritize cards that can enable you to develop a significant advantage on their own, because that's the class of cards that's hard to come by.

Similarly, in a Shards of Alara block draft, it will often be right to prioritize mana fixing over good early drops and good mid-late drops.

Mana fixing, like good early drops, expands your options for the rest of your draft. However, good mana fixing alone will not make your deck impressive. Picking up mana fixing will simply fulfill one requirement of an otherwise healthy deck. Even if you have a couple of Arcane Sanctums, an Armillary Sphere, and a landcycler, you will still need to have a full set of cards that will allow you to actually do things that effect the board. Even with that high-quality mana fixing, you will have to get your early game and your late game spells to fill out your deck. (Of course, you do have more options for what spells you can cast with all that mana fixing, but the needs are still there.)

However, if your deck has a bunch of good early drops, that will often be enough to put you in a very good position to win. And once you've already picked up those early drops, pretty much anything, except possibly the most defensive cards, will fit comfortably into your growing deck.

You have to do and watch a lot of drafts to understand just how easy it is to get into a bind if you don't pick up enough cheap spells early. And even if you are aware of the fact that you get additional equity out of picking up cheap spells early, that doesn't mean it will always be right to. In fact, it will occasionally be completely correct to consciously put yourself into a Hail Mary situation going into pack three.

However, if it's early in a draft and you have a choice between an early drop and a marginally better expensive spell, you should almost always go with the inexpensive option. The equity that you get out of having that cheap spell in your stack outweighs the value you would gain by having a card that is slightly more powerful in the abstract. You can find an easy substitute for a decent-good four-drop. You can't find an easy substitute for a relevant one- or two-drop.

Posted in Limited Information on January 5, 2010