Making Your Own Way

Posted in Limited Information on October 27, 2009 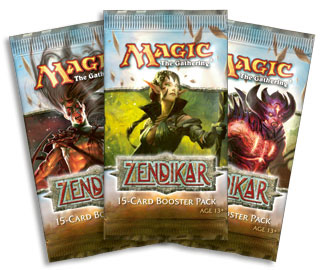 hen I sat down to do my first booster draft, I had no idea what was going to happen. I had heard that I wanted to stick to two colors if I could help it, so I did that, but I didn't really understand what a mana curve was, or how important removal was, or really any of the basic strategies that go into successful drafting.

My deck wound up being pretty poor, but because I had stuck to two colors I could still play (somewhat) competitive games. I learned a lot during my first draft, things that I couldn't have hoped to piece together by simply reading about Limited. I got to get a feel for how Limited games played out as opposed to Constructed games, I got to see in action how important removal spells are, I got to see how important it was to have a proper balance between cheap spells and expensive, game-breaking spells, I got to see how effective evasion creatures are, and so on.

When I went back home after that draft and started reading articles about limited things began to make sense in a way that they never could have before I had drafted my first deck.

The next time I went to draft I was better prepared. I had some sense of how to value cards, and I knew why I wanted removal. I knew what types of creatures to look for, I knew that card drawing could be quite effective, I knew not to waste my Giant Growths for a few extra damage early, I knew not to chump block randomly on turn five, etc.

But what I didn't understand is how much control you have over the type of deck that you will ultimately end up playing.

And I didn't understand that until about my fourth draft when I heard someone talking about how good the aggressive red-black deck was in the format.

I didn't understand what he was saying, but I thought I did, so I chimed in by saying, "Yeah, there sure are a lot of good black and red cards in Invasion. It's too bad you can't get them every time."

The person I was talking to was more than happy to take some time to explain things to me and said: "Of course you can get them every time, you just take aggressive red and black cards, and boom, you have an aggressive red-black deck."

This simply blew my mind. The idea that you could control what type of a deck you drafted had never occurred to me before. I had just assumed that you took the best cards that came to you were and that was your deck. I thought the skill came in playing and in knowing what the best cards were.

It turns out I couldn't have been further off.

My first attempt to draft an archetype ended pretty poorly, as I was under the impression that life gain cards and damage prevention effects were extremely powerful. Whoops!

But subsequent attempts to draft something with a coherent strategy went much better, and by about my tenth draft, I felt like I could really hold my own. Not long after that, I managed to win my first Tuesday night draft with a powerful, controlling white-blue-black deck headlined by the one and only Dromar, the Banisher (the first prize was a box of Invasion, so I was ecstatic).

I was able to start drafting winning decks because I developed an understanding of what cards were good in the abstract and, perhaps more importantly, how those valuations would change depending on what type of a deck I was drafting.

But some archetypes, even established archetypes, look to specifically exploit unique synergies. Green-blue landfall is an excellent example of a popular draft strategy that is interested in doing very different things than what the majority of other players will be looking to do.

Hedron Crab, the deadliest catch, is the type of card that encourages you to draft your deck in a wildly different way than you would normally.

And that type of experience lets you know whether or not you will want to play Zektar Shrine Expedition in your deck, or how highly you should take Harrow, or whether you should draft that Adventuring Gear, or ....

Sure there are times when you will just wait to see what the best cards and colors that come your way are, but at a certain point in every draft you will have to make a decision about what type of deck you are drafting and what types of cards will be good in your deck.

Drafting a two- to three-color good stuff deck is the polar opposite of creating your own archetype. Instead of trying to actively seek out cool interactions, you attempt to take the most powerful cards in the abstract until you get a full understanding of what cards will be at their best in your deck.

But you will have to start making tough decisions at some point. This will usually happen somewhere towards the second half of pack 1 (if not sooner).

So even though good stuff drafting might seem like you are avoiding specific archetype biases, you are intentionally biasing raw power over potential power. While it's certainly not as rigid of a strategy as if you went into a draft with the intention of drafting a white control deck, you are making conscious decisions about what you value long before you start drafting for synergies.

Making Your Own Archetype

Early in a format, you have the freedom to draft pretty much whatever you want as you (and everyone else for that matter) figure out what color combinations work well together, how fast the format is, what the best ways to abuse the mechanics in the set are, etc.

Over time, however, many players will independently come to similar conclusions about a Limited format.

But if I saw someone drafting mono-red now, I wouldn't think it was very special at all. It wouldn't be special because it's a commonly known strategy. Sure, it might be good, and you might have figured out a unique way to draft the deck (I for one love to have multiple Goblin Bushwhackers in my more aggressive mono-red builds), but just being mono-red wouldn't be unique in and of itself.

So how can you now find a draft archetype that is truly your own?

Doing something new and different isn't a guarantee of success. In fact, you will often encounter many unforeseen difficulties when drafting your outside-of-the-box deck. But if things do go well, you could end up with something very special on your hands.

The Role of Rarity

When you are following an established archetype, you should have a pretty good sense of how to evaluate (most) cards within that strategy. When you are drafting something new, you will have to figure a lot of things out on the fly. But just because you have a lot to figure out doesn't mean you should try it.

You just need to keep in mind that the fact that a deck isn't drafted frequently is not indicative of how good it is. Some strategies just haven't been discovered yet, while other strategies are only viable if you have specific rares or uncommons in your deck, and for that reason they might not have the opportunity to shine very frequently.

Luminarch Ascension, Archive Trap, Beastmaster Ascension, and Bloodchief Ascension are all cards that could throw your deck for a loop. And if you got a Pyromancer Ascension with enough powerful duplicates to utilize it, you might end up with something truly unique and absurdly powerful.

Keep your eye open for strange interactions, especially when rares are involved. Who knows? Something very powerful might present itself it your very next draft.

You just sat down to build your Sealed Deck for Grand Prix–Tampa. You have three byes and you're looking to really rip through the tournament. How would you build your deck from this pool?

1 Quest for the Gemblade
79 Cards

Posted in Limited Information on October 27, 2009