Posted in Limited Information on August 12, 2008

Let's rewind to Grand Prix: Madrid. I'm 10-2 going into the second draft, and I need to go 2-0-1 or 3-0 to top 8. You can read complete coverage of my draft but I'll fill you in on some of the key points. I opened up my first pack and I saw an Oona, Queen of the Fae waving at me. I wave back at my pick for the best card in the format and I'm on the road to a great deck.

The rest of the pack goes by and I pick up a lot of solid blue cards including a couple of Consign to Dreams.

I open up my second pack and there is an Incremental Blight waiting for me.

How nice, now I have the best rare and the best uncommon in the format!

The rest of the draft goes by and I get passed a TON of awesome blue including a Wake Thrasher and an Overbeing of Myth.

This was my final deck:


Needless to say I was feeling great about my chances. I felt even better about my chances when I beat Bram Snepvangers, who was far and away the most experienced and successful player in my first draft pod.

Before round 14 I was starting to get a bit cocky and I could already see myself in the top 8. Then I got called for a feature match against Simon Ritzka and his blisteringly fast mono red deck.

Simon didn't waste any time to make the match look close, beating me in under 10 minutes. The match was over before most players had finished a game.


Now my deck may have had "better" cards than Simon's, but there was almost no way that I could win. His deck was too fast for me to race, and it would be nearly impossible for me to play a defensive game if he drew any of his 2 Tattermunge Witches, 2 Intimidator Initiates, or Ember Gale. Even if he didn't draw one of his cards that made it tough for me to block I would still die to a good curve draw with Mudbrawler Cohort and Boggart Ram-Gang.

Pretty much my only hope of winning would be to get some combination of Plumeveil, Incremental Blight and Oona, Queen of the Fae.

So I walked into my match thinking that I would have a huge edge, but I wound up being a huge underdog because Simon's deck matched up incredibly well against mine.

The blue decks that I drafted at GP: Madrid and US: Nationals had a lot of evasion creatures and a good amount of bounce, hopefully including the magnificent Banishing Knack. I love drafting this type of deck. When the deck turns out well I rarely lose to slow decks, especially slow green decks.

But, as good as the blue deck is against slower strategies, it is almost impossible for it to beat the fast red decks. Part of the blue deck's vulnerability to fast red is that the red decks tend to be really, really good. But there are plenty of other decks, such as the aggressive white decks, that are much more competitive against red.

Thanks to hybrid, colors tend to be very fluid in Shadowmoor/Shadowmoor/Eventide so you don't see as many clear-cut archetypes. Many decks can branch off in any number of different ways and, as a result, aggressive red's domination of blue is probably the clearest cut archetype advantage you can find in the format.

That being said, there are still tons of examples of matchup advantages to be found in your next draft. For example: Removal-free decks tend to be quite weak against decks with Power of Fire and untap creatures. Slow decks with little-to-no early defense tend to get blown out by fast decks. Decks with a lot of 1-toughness creatures will have a hard time beating a deck that draws Soul Snuffers or Gnarled Effigy. If two blue-white decks are squaring off and one of them has 2 Banishing Knacks, then the Knackless deck is going to be in trouble.

Sometimes a matchup advantage will occur because of a single card, other times it will occur because one deck just trumps the other. The next time you do a draft take a look at all of the decks at the table and ask yourself which decks match up well against which decks. I'm sure that you will learn a lot from the exercise.

If you don't feel like waiting till your next draft, then take a look at the Top 8 decks from GP: Madrid. 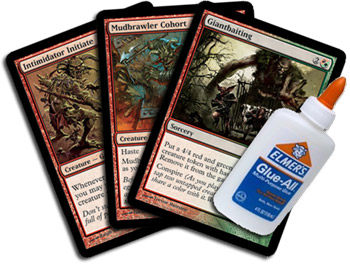 There are a lot of cards that go well in the aggressive red deck that also go well in any sort of deck. Cards like Burn Trail, Power of Fire, Murderous Redcap, Puncture Blast, and Hatchet Bully will be good anywhere you find a Mountain.

But then there's the glue of the deck. Cards like Intimidator Initiate, Mudbrawler Cohort, Giantbating, Cinder Pyromancer, Sootstoke Kindler, Heartlash Cinder and Horde of Boggarts. None of these cards are particularly good in most decks, but put them together along with a bunch of other fast red cards and suddenly you have a deck that would almost be playable in Block Constructed.

The average mono-red deck might look like it needs to get "lucky" to win, but many decks are simply unable to keep up unless they get their fastest draws.

For an example of this, let's look at Romain Fenaux-Briot's GP: Madrid quarterfinals match against Tommi Lindgren.

1 Rage Reflection 1 Fists of the Demigod


Other than the Jaws of Stone and the Deus of Calamity, nothing in Romain's deck screams out as being that great (though Jaws of Stone is absolutely phenomenal in a mono-red deck). To compliment these two bombs Romain has a few good creatures like Hearthfire Hobgoblin, Rage Reflection, Giantbating, and a whole bunch of cards that, correctly, sit happily in most sideboards.

Just because the mono-red deck is really good doesn't mean that you should be looking to stuff Emberstrike Duos and Steam Hoppers into decks that aren't blisteringly fast or full of hybrid auras.


Tommi's deck just jumps out at me as a good draft deck. He has a good curve including Twinblade Slasher, Nettle Sentinel, and two Hungry Spiggans, so he can come out really fast. He has cards in the middle of his curve (such as Wickerbough Elder and Ballynock Trapper) that are good going into the late game. He has some removal. He has a couple of all-stars in the forms of Biting Tether and Seedcradle Witch. He even has a Savage Conception to make sure he won't get flooded. Oh yeah, and with one heavy base color and two small splashes, his mana is really good.

All in all, this deck fires on every cylinder.

As good as Tommi's deck may be, and as bad as Romain's deck may look, a lot of things would have to go right for Tommi to be able to win a three-game match against Romain. 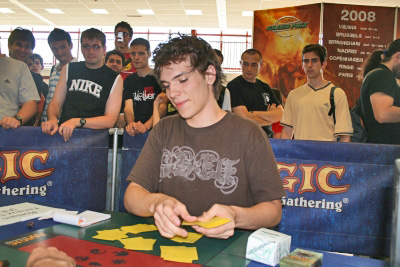 Romain Fenaux-Briot, Grand Prix-Madrid SemifinalsIn order to draft a good aggressive red deck you have to be prepared to take Giantbating, Mudbrawler Cohort and Intimidator Initiate very early. I've seen players open up packs and first pick a Giantbating without giving it a second thought.

The first time I saw a friend do this I thought he was goofing off, so I stopped watching his draft.

When I came back a couple of hours later he had just finished going 3-0.

The red deck pays off people who are willing to go all out from the get-go. Of course, it's easier to start pushing for the red deck if your first few cards are Burn Trails, Puncture Bolts and Boggart Ram-Gangs, but you shouldn't be afraid to take a chance on a 3rd pick Intimidator Initiate.

So, while it might seem safer to pass early Giantbatings and Intimidator Initiates early in favor of cards that are better in the abstract and then move into mono-red later, if you have your heart set on drafting red then this is actually a more dangerous move than picking up those early aggressive red cards that might ultimately end up in your sideboard. By passing those Giantbatings you run the very high risk of having someone see a Giantbating 6th or 7th and take it as a signal that mono-red is open.

Instead, by taking that Giantbating very early, you keep the people who are waiting for a red deck to fall into their lap out of your way, and you might be able to push players who were attempting to draft mono-red out of the archetype and into something more normal.

The red deck favors the bold, so don't be afraid to be bold.

That being said, if you are drafting mono-red and you're mid-way through the second pack and you don't have any Giantbatings, Intimidator Initiates, Ashenmoor Gougers, Boggart Ram-Gangs, Jaws of Stone or Burn Trails, then you need to start figuring out how your deck is going to win, because you aren't going to be able to brute force your way to many victories.

Once you get to Eventide and your deck is clearly going to be mono-red or nearly mono-red you are going to want to be on the lookout for the usual suspects such as Puncture Blast, Noggle Bandit and Spitemare. You also want to keep your eyes peeled for Hotheaded Giants, Heartlash Cinders, Unwilling Recruit and Cinder Pyromancers.

Flame Jab is simply incredible in this deck. If you have an Intimidator Initiate or a Cinder Pyromancer then your opponent is going to be in for a world of hurt when you start retracing your 1 damage sorcery.

I hope you'll have fun drafting the mono-red deck, I know I have!

One of the things that I thought was interesting about this poll is, with the exception of the hybrid auras, I could easily see myself first picking any one of these cards and being happy about it. I don't see many situations where I would take Aerie Ouphes or Wickerbough Elder over one of the other cards on the list (assuming I could cast the other card). Other than that, I can easily see myself taking any of the cards on the list over any of the others. Puncture Blast over Soul Reap? Sure! Ballynock Trapper over Unmake? No problem!

So whatever your personal pick from this list was, unless it was a hybrid aura, I can tell you that I think you were right!

However, even though they are all pretty close in abstract power, I do have a favorite. In case you didn't already guess it from last week's column, my pick for the most powerful common is Banishing Knack. I've already talked quite a bit about that card however, so next week I'll take a look at Snakeform.

I guess I just have a knack for bouncing all of my opponent's creatures!

Posted in Limited Information on August 12, 2008