Posted in Limited Information on September 22, 2009 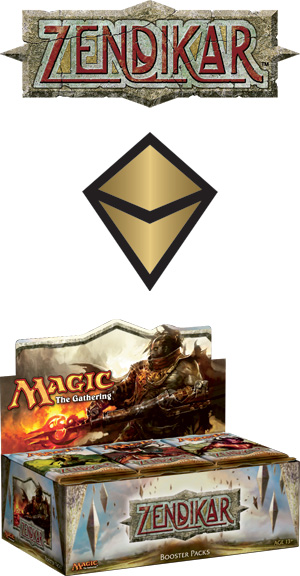 he Zendikar Prerelease is right around the corner, and I'm excited.

Whenever a new set comes out we're presented with a whole new world to explore. This new Limited format is fun and exciting, but it's still Magic: The Gathering. And how different can it be, really?

The answer is very, very different.

Each time a new set comes out, we're still playing the Magic: The Gathering we've grown to know and love. But it's not exactly the same, and that what makes it exciting. There are so many new things going on that we should be careful not to let our experience from playing the immediately preceding format dictate our play too much.

Yes, we should draw on our past experiences to help put into perspective the new opportunities that are in front of us, but we should be careful to look at things from the correct angle.

I distinctly remember playing at the Odyssey Prerelease and getting thomped in round one of my Sealed flight because I didn't respect threshold well enough.

Steve's internal dialogue during the match:

"What is my opponent thinking? Getting rid of cards on purpose with his Wild Mongrel, just to deal me an extra damage? PFFFFFFT! Good luck winning that way."

"How did I just lose? My opponent threw away so many cards to his Wild Mongrel!"

Then at the Mirrodin Prerelease (and for the few weeks immediately following it), I was able to mop up the floor with my opponents because I had quickly recognized the strength of affinity in Limited and the value of off-color artifact lands.

My problem at the Odyssey Prerelease was that I was trying too hard to apply old rules of thumb that just didn't apply. Sure card advantage always matters, but it isn't always the most important thing.

What I learned from the Odyssey Prerelease was that when I'm playing with a new set, I shouldn't be looking to take advantage of a situation in the same way that I looked to gain an edge in the previous format. Instead I should be looking for how to best use (and abuse) the tools that are given to me.

So what's it going to be for Zendikar Limited?

I don't have a very good sense of what types of deck archetypes are going to be viable in Zendikar Limited, but I do know that landfall is going to make a big impact on the way we play.

Maybe landfall will be seen primarily as a subtheme in otherwise "normal decks." Maybe someone at every table is going to walk away with a deck based solely around this new mechanic remains to be seen. I do know that the players who identify the best applications for this new mechanic are going to have a substantial advantage at the Prerelease and during the first few weeks of play.

Taking advantage of new mechanics isn't the only way to gain an early advantage in a format—not by a long shot. Recognizing the speed of a format is another key way to gain a significant leg up on your competition. Sets vary dramatically in speed and power level for Limited play. For example, Shards block Limited was noticeably faster and more powerful than Magic 2010 Limited.

(I should mention that the speed and power of a Limited format does not necessarily have any correlation to how good the cards in the set are for Constructed, or even whether that set is going to have the effect of speeding up or slowing down a Constructed format.)

For example, M10 was chock full of Constructed staples like Great Sable Stag, Glacial Fortress, Baneslayer Angel, and Lighting Bolt. And if we're looking at the set's effect on the speed of formats, Lightning Bolt alone has done its part to make Standard and Extended a notch faster and more powerful than they were when Tenth Edition was the current base set.)

Magic 2010 Limited, on the other hand, is a relatively slow format, and many of the games are settled purely through patience. In M10 Limited, if you have a Doom Blade in your hand and your opponent casts a sizable creature such as a Stampeding Rhino, it is often correct for you to save your Doom Blade so you have an answer to your opponent's bombiest creature(s), such Ant Queen, Djinn of Wishes, or Baneslayer Angel.

Because players don't kill each other very quickly, they often have time to draw their best cards. So even if your opponent isn't holding an Ant Queen at the time that he or she casts Stampeding Rhino, if you have a reasonable, non–Doom Blade way to deal with the 4/4 trampler it is often right for you to do so.

Holding onto that Doom Blade means that you won't flat-out lose to your opponent's Baneslayer Angel if it decides to make an appearance. (For more on dealing with bombs in M10 check out this article.)

But you can rarely afford to play that conservatively in a format like Shards block Limited. Things just happen too fast.

Sure, you might not have to use Executioner's Capsule on your opponent's turn-two Bant Sureblade, but if he or she follows it up with a Woolly Thoctar, then you're almost certainly going to have to pop your artifact.

And a lot of the time, you will have to use Executioner's Capsule on your opponent's Bant Sureblade. If you don't have any plays that allow you to develop your board at a reasonable pace (or a way too catch up at a profit such as Volcanic Fallout or Infest), then you risk falling waaaay behind out of fear of losing to a bomb.

A few turns of getting hit by that Bant Sureblade later, and you'll probably have to Executioner's Capsule it. And what will you have gained yourself? Nothing other than a bunch of lumps on your head, out of fear of some big-bad boogie man that might never even show up.

When you're at the Prerelease, play some games with people in-between rounds and look at other peoples' decks. While it can definitely take a while for you to hone your instincts of when you should be using your removal spells in any given Limited format, if you consciously try to get an understanding of how quick the format is you should be able to improve your learning curve dramatically.

From what I've seen of the spoiler so far, Zendikar looks like a two-color-plus-splash format that will feature the occasional four- or five-color deck. The format looks to be traditional in this sense.

So your green-red, splash-black Sealed deck should probably have something like 8 Forests, 7 Mountains, and 2 or 3 Swamps (assuming you don't have any good multicolor-producing lands).

If you have a good amount of mana fixing in the form of cards like Harrow and Khalni Heart Expedition, you might be able to support a fourth or even a fifth color. But barring that, you should probably stick to a straight two-color deck, or a two-color deck with a slight splash.

Sure, it might look attractive to go for some extra colors, but if you don't have the mana fixing to support it, it really won't be worth the cost.

Prepping Yourself for the Prerelease

Going to your first Prerelease can feel intimidating. Heck, I was too afraid to even play a match at my first Prerelease. I simply signed up, got my Mercadian Masques and Prophecy packs, conceded to my first-round opponent, and dropped out to go yuk around with the new cards with my friends.

I had a ton of fun hanging out with my friends at the Prophecy Prerelease. We got pizza and milkshakes and played a bunch with our new cards. We tinkered with our existing decks and came up with plans for entirely new concoctions. But for some reason we had all psyched ourselves out of playing in the tournament itself.

A few months later, my friends and I signed up for and actually played in the Invasion Prerelease. We had an even better time at the Invasion prerelease than we did at the Prophecy Prerelease. None of us won any prizes (although I came close, starting the tournament out with a 2-1 record before losing in the fourth round playing for packs), but we all learned a ton from the experience while having a good time.

Magic had become a very insular experience for us before that Prerelease. We weren't really trying to get better at the game. We were just doing things to try to beat each other's most recent decks.

My friends had a good time, our opponents were all very polite and respectful, and many of them were more than willing to take some extra time to talk to us about how they built their decks, how we built our decks and things that we could do to improve our play.

After the tournament, my friends went back to playing Magic with each other once a week, venturing out for the occasional Friday Night Magic but generally staying within their group for everything but Prereleases. I don't think any of the three people that I went to the Invasion Prerelease with missed a Prerelease for the next two years. 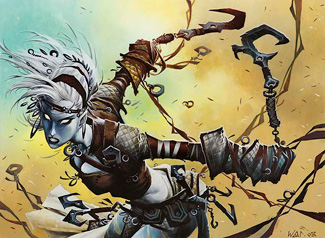 Me, I was hooked on competitive Magic. Nine years and 385 tournaments later, I'm as excited as ever for my next Prerelease.

A Prerelease is about as fun and inviting of a tournament as you can hope for. It becomes even more fun when you have a sense of what you're doing. And there just so happen to be a number of articles that have already been written that should have you feeling even more at home at the Zendikar Prerelease.

There's nothing to be afraid of at the Prerelease. Just like you, everyone there is looking to have a good time playing with new cards. And if you take the time to read and process the information from those three articles (especially Jeff Cunningham's), you should be more than ready to put up a good fight at the Prerelease.

Posted in Limited Information on September 22, 2009