ultiplayer does not necessarily mean casual. Not in the slightest.

Yes, there are plenty of casual multiplayer games—and why wouldn't there be? If you are looking to play Magic and have fun with your friends in a relaxed setting, why not bring everyone into the same game?

But multiplayer doesn't have to be just for fun. Unfortunately for competitive multiplayer aficionados, there aren't that many multiplayer tournaments.

But just because there aren't many multiplayer tournaments doesn't mean that players don't take their multiplayer games very seriously. Believe me—over the years I've seen, and been a part of, some extremely intense, intricate, and all around epic multiplayer games.

Now I know there isn't that much that I can do to really influence the way that multiplayer experts play the game in just one article, but I can provide an introduction for those who are looking to bring their multiplayer game to a more competitive realm.

Why is multiplayer play so interesting? The biggest factor is that more players mean more variables.

While two player games of Magic are endlessly fascinating and engaging (I can't even begin to count how many hundreds of hours I've spent playing and thinking about two player Magic games) there's a certain range of strategic decisions that you can consider. The possible decisions and considerations that two player Magic offers are more than enough to keep me satisfied—but the type of Magic experience that I'm drawn to is different than the type of Magic experience that you might be into, or that your best friend might be into, or that the guy at your card shop who owns every foil card ever printed might be into.

You don't have to worry about diplomacy issues when you are playing a heads-up match—you only have to think about one enemy. Once you sit down to play a game, there's no teamwork or prioritizing between foes—there's just you and your opponent. And that's great for me.

But in a multiplayer game, you have to consider the actions of numerous foes while making each and every one of your decisions. This could mean forging alliances to pummel your stumbling opponents, setting up a more manageable battle against just a couple of players. This could mean waiting to make your most powerful plays so you don't attract the rage of your enemies.

This could even mean sandbagging your removal spells and other answers in hopes that other players will spend their cards answering the top threats that your opponents present.

In multiplayer play, you need to strike a careful balance between working with your neighbors, playing your opponents against one another and doing enough work by yourself to make sure that you are in a position to eventually win the game.

But how do you do that?

While I don't have any statistics handy, I feel pretty safe venturing a guess Free-For-All is the most popular kind of multiplayer play the world over.

There are a lot of different minor variations on how to play a Free-For-All game: you might give free mulligans to players, you might allow the player who goes first to play and draw first, etc.

But these minor rules variation don't change the fundamental core of Free-For-All play. If you sit down for a Free-For-All game you are ultimately signing yourself up for a whole lot of carnage, mayhem, and, of course, diplomacy.

Just because a player, or a deck, or a card is really good in heads-up play does not mean that those same high quality attributes will translate to multiplayer play.

You could be the best drafter at your local shop—always drafting aggressive decks that run your opponents over before they can do anything effective, or controlling decks that stall until late in the game when you can take over with your bombs—allowing you to win prizes in the majority of store drafts that you play in.

But as soon as you sit down for a multiplayer game with what would otherwise be a deadly aggressive deck, you could find yourself flailing around pretty helplessly while you get picked apart by a rogue Alluring Siren, or by a Pawn of Ulamog that is powering out a series of deadly Eldrazi monsters.

The thing is, you can rarely beat down a bunch of enemies with quick creatures.

Sure you still want to have some cheap spells in your deck so you aren't the one gasping for air in the early game—but in general, you can slow things down a little bit for your multiplayer decks.

Some cards, like Blood Tithe and Howling Banshee obviously get better in multiplayer play because they affect a lot more players. But they aren't the only cards that change in value.

Cards with conditional targets, like Naturalize or Plummet, tend to be much stronger when there are a bunch of players sitting around your table than when you're only dealing with a single opponent at a time. Similarly, cards that have conditional value, like Unified Will, are stronger when you sit down against multiple foes.

Cards that are particularly strong defensively, like Guard Gomazoa, get significantly better when you have multiple players attacking you.

Cards that you have to sacrifice when they are the target of a spell or an ability, like Ice Cage or Phantasmal Abomination get much worse when you have several opponents.

Cards or combos that leave you in a fragile state, such as Devastating Summons, tend to get worse when there are a whole bunch of players at the table who can disrupt your plans.

Changing the Way That Cards Are Played

In multiplayer games, where it tends to be rare for players to put together that many aggressive starts, Æther Adept is great at bouncing gigantic dragons, or little Goblin Pikers who have been made quite big thanks to a Shiv's Embrace or an Elder Mastery, or you can even use it to bring back your Manic Vandals to shatter a new, big artifact that has been menacing you.

Sure, you might still cast Æther Adept on turn three from time to time if you're worried about getting attacked, but in general you will be able to hold onto it until later in the game when you can get extra value out of it.

Similarly, board sweepers like Pyroclasm, or Consume the Meek take on a whole new life when you can use them to wipe out cards from multiple players. In a heads-up game, it is often correct to Pyroclasm away a Llanowar Elves and a Runeclaw Bear—but in a multiplayer game you can afford to wait until there are a whole bunch of juicy little creatures to knock into the 'yard.

As a general multiplayer rule of thumb, you want to take a little bit more time than you normally would in a two-player game before you cast your spells. With three, four, or more players in the game there will always be plenty of targets for your removal spells, plenty of creatures to trade with in combat, plenty of lands to destroy, plenty of spells to counter, etc. You just need to pick your spots carefully.

There's nothing worse than using up all of your cards early and having to sit around helplessly during the juiciest turns of the game.

If you want to delay making enemies for as long as possible, then you should fill your deck up with defensive cards, rather than cards that will draw the ire of your foes such as Mind Rot. 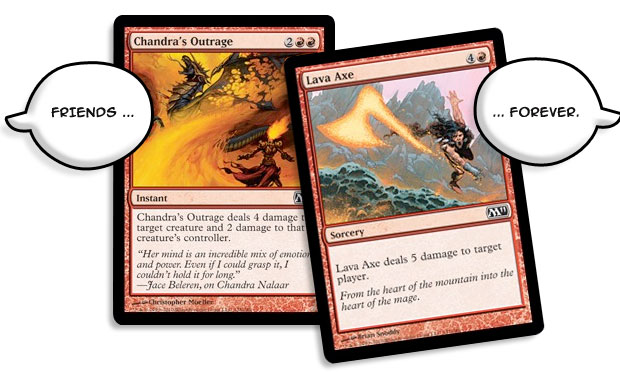 But if you want to team up with players and gang up on unsuspecting foes, then you should fill your deck up with high-impact spells like Lava Axe. You want cards that you can actually cast in conjunction with other players to get more value out of things like Chandra's Spitfire.

There isn't one ideal way to build your deck for multiplayer play. There are definitely ways that you can lean your deck towards a more defensive, cooperative build (that waits until the late game to take over against unsuspecting foes) or towards a more aggressive, enemy-making build.

One surprisingly effective strategy in multiplayer games is to play possum for a while, pretending that you are quite weak—allowing other players to deplete their resources while you accumulate a collection of cards that will allow you to take over late in the game.

This strategy can backfire on you, as your weakened position early on could lead you to get bullied out of the game by your more aggressive foes. But if there is a close enough balance of power, where players cannot use too many resources to attempt to defeat you, then you very well might want to wait back and take a couple of licks until you can take over the game.

If you are looking to play a Fee-For-All draft then I would strongly recommend that you use packs from a bunch of different sets. 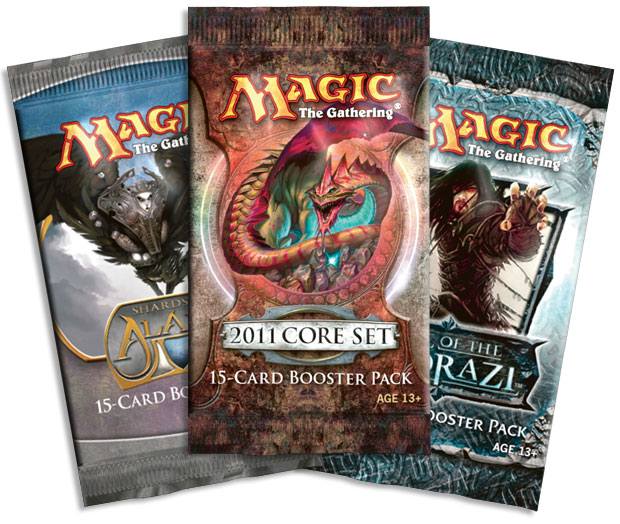 If you exclusively use packs from M11, or whatever the most recent set may be, you will still have a good time—but if you are looking for a truly unique experience you should mix in packs from as many different sets as possible.

One of the things that excites me most about multiplayer play is that you truly have to prepare for the unknown—and what better way to make things unknowable than to use packs from a dozen different sets?

Another fun way to draft for multiplayer play is to draft from a Cube. A Cube is a preselected set of cards that you randomize and make packs out of.

Unlike most multiplayer formats, Two Headed Giant has seen, and continues to see, its fair share of tournament play.

In Two-Headed Giant, players play alongside a teammate in a two-on-two game. Teams share a 30 point life total, and take their phases at the same time. A team's resources (cards in hand, mana, and so on) are not shared.

Example: Player A has a Glorious Anthem in play. Only Player A's creatures will get +1/+1. His or her teammate's creatures do not.

For the most up to date 2HG rules, check out and download the Two-Headed Giant FAQ.

How Do You Dominate in Multiplayer Play

I know that there are a good deal of multiplayer fans and experts who read this column and I would like to encourage all of you to participate in this week's forums.

Let me know how you play Limited multiplayer Magic, tell me what some of your favorite strategies are, and share some more helpful tips for those looking to bring their multiplayer game to the next level.

I look forward to reading your responses!