Modern Masters is a real Draft format. I don't feel the need to build any more excitement for this release than there already is. With a full slate of exciting and sought-after reprints, some sick new artwork, and a premium foil card in every pack, Modern Masters has done plenty to garner attention for itself. 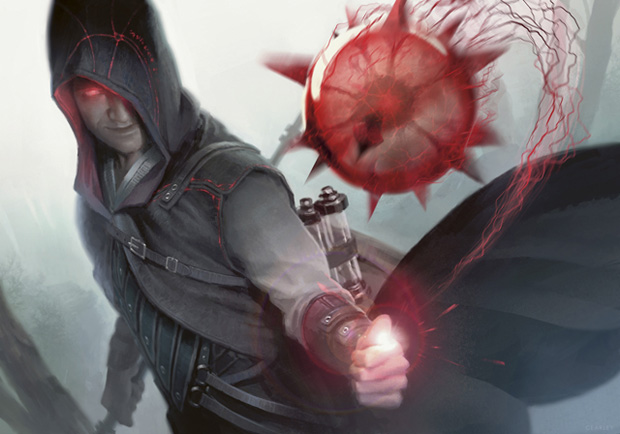 That said, it is a real Draft format, and that's what we will be taking an initial look at over the next few columns.

That, and a bunch of sweet preview cards from the set.

For Drafters, By Drafters

Take a look at the design and development team for Modern Masters:

That is a list of Spikey draft junkies right there. Having had personal experience with each of these people, I had a good idea what to expect from Modern Masters draft.

I expected complexity, depth, and nearly endless interaction. Core sets—and even expansion-level releases—have to carry a level of accessibility to newer players. They must be complex enough to satisfy the people who draft them 50–100 times (like me), but straightforward enough that if you only draft the set four or five times, you aren't feeling totally lost (like Fblthp).

Modern Masters takes the gloves off. If you love complex, interesting, deep Draft formats, this is for you. And why not? There are plenty of great products aimed at the broader audience: Planechase, Commander decks, Intro Packs, Duels of the Planeswalkers, the From the Vaults series, and so on.

But what about the hardcore enfranchised players? While often the most vocal group, and the one who makes up a big percent of the active Magic community, enfranchised players are demographically much smaller than the hoards of "casual" players who play Magic. (I used quotes around "casual" because I don't think it's the correct word, but it's the one that is used the most often). Modern Masters Draft is like a big "Thank you!" to the enfranchised players. It's varied, complex, and filled with fan favorites from years past.

This draft format is like many others in that it's been designed with color pairs in mind. There is overlap, but each of the ten two-color combinations has its own base archetype. I'll be walking you through a few color pairs over the next three columns, using preview cards to spotlight some of the archetypes. I'm not going to go too deep into each one, and I won't cover them all. But I think you will get the idea of where development was going after seeing some of the cards. 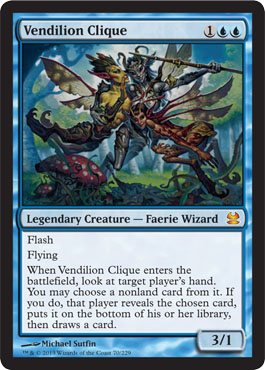 One of my personal favorite creatures of all time, and I get to draft it. I wasn't actively drafting yet when Morningtide came out, so my experience with Vendilion Clique has been in Extended and, more recently, Modern and Cube Draft. I remember the first time I resolved this triplet of value, at the Community Cup, playing in the first Modern tournament. I had no idea how to use the card properly. I remember feeling overwhelmed by the options I had at my fingertips. (I ended up asking my teammate, Luis Scott-Vargas, for tips—not a bad fallback plan) After getting used to the card, it quickly became one of my favorites.

Back in the world of drafting, what does this mean? We have a blue Faerie creature. Could Faeries be one of the archetypes in Modern Masters Draft? If so, which color is it paired with? Black would be the obvious assumption. Let's take a look at two more preview cards, and see if that assumption is correct. 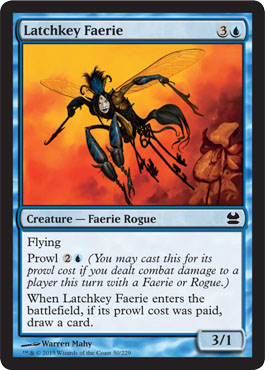 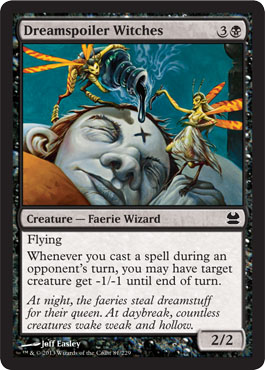 Verified: black and blue means Faeries in Modern Masters draft. We also see that the prowl mechanic has returned. This may signal to you that prowl is a key mechanic in the format. While it may be a factor, I assure you it is but one of many returning mechanics in Modern Masters. If you are the type of player who loved drafting Time Spiral, you are going to enjoy Modern Masters.

I have one more preview card from the blue and black side of things, and I think it will hint nicely at some of the other directions the designers took this set. 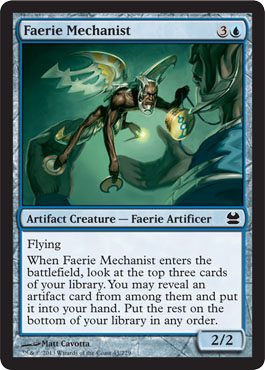 Originally printed in Conflux, Faerie Mechanist was great at digging up artifacts from the shard of Esper. While things have changed in the world of Modern Masters, there are still plenty of targets for the Mechanist to dig for. As with many of the cards in this set, it will have a home in multiple archetypes.

Faerie Mechanist also foreshadows the crossover potential in this set. Even though the archetypes are broken up into color pairs, we aren't talking about guilds here. The barriers between archetypes are much lower than in recent sets. There will be plenty of overlap, and plenty of room to go as deep as you wish in this set.

I'm going to take you in a wildly different direction now to take a look at the green and red color pair. 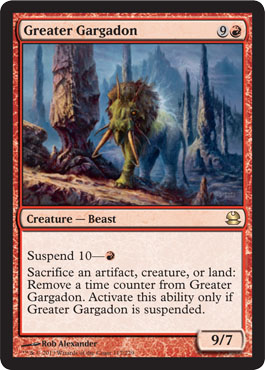 What did you expect from red? I was thinking maybe some haste creatures and burn spells. Maybe land destruction or something?

And they didn't mess around, either. We got the big Gargy here to tick-tock his way to the beatdowns. A suspended Gargadon on turn one is always a stressful situation for the opponent. It allows you to use your resources in ways they normally wouldn't be used, and it gives you a one-card plan of attack. If your opponent gives you the opening to hit, you can just move in with Greater Gargadon and hit for 9 damage.

Greater Gargadon is a rare, but the suspense goes all the way down to common: 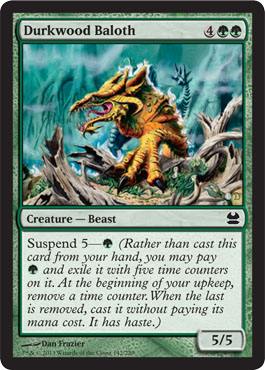 While Greater Gargadon costs a full ten mana to hard-cast, Durkwood Baloth is a reasonable 5/5 for six mana if you just need to cast a creature. Also a fine turn-one play, the Baloth gives that ominous feel that only a suspended beater can. At common, you can pick up quite a few of these (remember, all three packs are Modern Masters) and have one suspended turn one often.

The suspend doesn't end there, though.

If you just need to cast expensive spells, this next one can be of great service: 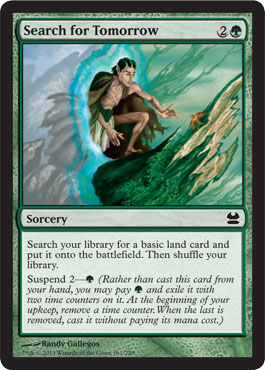 You can suspend this powerful ramp spell for just one green mana or you can simply hard-cast it for three. The best part? The basic land you search out doesn't enter the battlefield tapped, so you can use it the turn Search for Tomorrow resolves.

Search for Tomorrow is also a powerful tool for those who prefer to branch out past the two-color threshold. Acting as both mana fixing and acceleration, it can be a boon when one is trying to go big and greedy. And I expect people to do that often.

So far, we have seen three powerful suspend cards. These are interesting cards by themselves, but what would a true master do with all these suspended cards floating around?

A true master would make sure that they all came off of suspend on the same turn so the storm count was as high as possible: 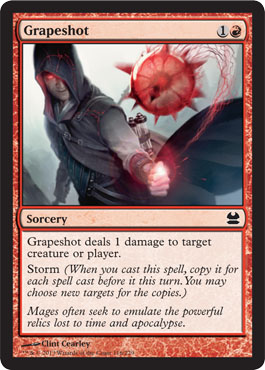 That's right, the green and red color pair is about suspend and storm.

I'll let that sink in.

The color pair normally associated with mindless, loincloth-wearing beef monsters carrying wooden sticks is all about suspending stuff and the storm mechanic. Grapeshot is an interesting card because it can act in two very different roles.

Sometimes you just go for the "value-Grapeshot," where you assemble a high enough storm count so Grapeshot kills one or two creatures. But other times, you go for the big combo kill, with Grapeshot as the finisher.

This isn't a normal set, and the Draft environment isn't for normal people. It's for people like me, and like you, who love Limited and who crave a deep, complex, and different draft experience every time we crack the packs.

There are a lot of mechanics and a lot of interaction in Modern Masters. It's one of those sets where anything is possible. Even in my limited experience with the set, I saw (and did) some silly things. Some of the archetypes—like blue-black Faeries—hearken back to previous sets. There are other archetypes like that, too. Some of them even bring back a certain type of nostalgia from when the game was still new.

And some others go in new and interesting directions that we haven't played before. In the next article tomorrow, I'll have more preview cards, and more archetype discussion too.

I know I plan to make every Modern Masters draft I get to do count.